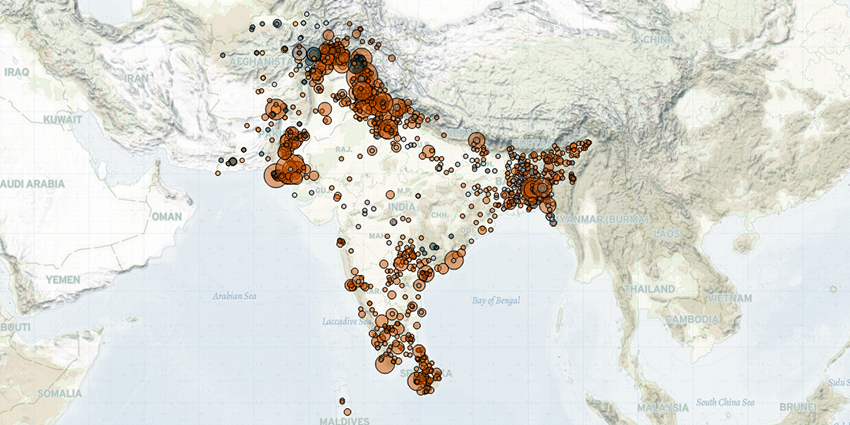 Last week in South Asia and Afghanistan, attacks on civilians, especially former security forces, continued in Afghanistan as a mosque came under attack by unidentified groups. The Pakistani government and Tehreek-i-Taliban Pakistan (TTP) reached an agreement for a month-long ceasefire. Pakistan revoked a ban on an Islamist party involved in a long-standing campaign against blasphemy related to French cartoons depicting Prophet Muhammad. Electoral violence spiked in Bangladesh during the second phase of the local elections. Lastly in India, security forces ramped up operations amid militant attacks on civilians in Jammu and Kashmir (J&K).

In Afghanistan, armed attacks targeting civilians continued last week as clashes between the Taliban and IS forces decreased. In Nangarhar province, at least three worshippers were killed and 15 wounded in a bomb explosion at a mosque in Deh Bala district. The bomb was reportedly attached to the mosque’s loudspeaker (Al Jazeera, 12 November 2021). While no group claimed responsibility for the attack, Taliban officials announced the arrest of the attackers last week, without providing any information on their affiliation or motive (Twitter @Zabehulah_M33, 12 November 2021). Meanwhile, further unclaimed attacks targeted civilians, mainly former Afghan government workers and their families. Taliban forces were also reported to have raided the houses of former security personnel and former uprising militia members. At least six people were killed during such attacks by the Taliban or by unknown groups in Kabul, Takhar, and Urozgan provinces last week. In response to ongoing persecution, former military personnel sent an open letter to a local independent newspaper last week, raising their security concerns and stating that such attacks may force them to “do anything to survive, the consequences of which are unpredictable” (Hasht-e Subh, 7 November 2021).

In Pakistan, militant violence decreased last week as the Pakistani government and the TTP reached a one-month ceasefire agreement that came into effect on 9 November (Gandhara, 9 November 2021). Negotiations are ongoing and the ceasefire could be extended (Gandhara, 9 November 2021). According to Pakistani government sources, the Afghan Taliban are aiding as a mediator in the talks (Al Jazeera, 15 November 2021). Although the Afghan Taliban and TTP are separate organizations, they follow the same hardline interpretations of Sunni Islam and the TTP renewed its allegiance to the Taliban shortly after their takeover of Kabul in August 2021 (Reuters, 5 September 2021).

In another development, Pakistan lifted a ban on Islamist party Tehreek-e-Labbaik Pakistan (TLP), which allows the TLP to participate in mainstream politics (Gandhara, 8 November 2021). The decision comes after deadly clashes with police during a series of violent demonstrations calling for the release of the party’s jailed leader and the closure of the French embassy over French caricatures depicting Prophet Muhammad (The New York Times, 1 November 2021). In the week prior, the Pakistani government reached an agreement with the TLP to end its proposed march to Islamabad and its demand to expel the French ambassador from Pakistan (Gandhara, 31 October 2021). The government also removed TLP’s imprisoned leader, Saad Rizvi, from its ‘terrorism watchlist’ though without making a commitment to release him yet (Al Jazeera, 12 November 2021). The TLP was banned in April 2021 after multiple clashes with police resulting in the death of at least seven people.

In Bangladesh, the second phase of village council elections took place on 11 November amid increased violence and a boycott by the largest opposition party. The Bangladesh Nationalist Party (BNP) refused to participate in the elections, accusing the government of intimidation and of preventing fair participation (Anadolu Agency, 11 November 2021). At least 17 people died during targeted attacks and clashes between different political groups last week, contributing to a significant overall rise in violence in the country (see ACLED’s Early Warning Research Hub for more). Most of these incidents involved members and supporters of the ruling Awami League (AL) party and independent candidates contesting AL’s bid to further consolidate its power. Former AL members who did not receive nominations and chose to run as independent candidates also clashed with the AL in Chittagong, Madaripur, Jamalpur, Pabna and Naogaon districts. Political violence is common during elections in Bangladesh, particularly around local polls, due to prevailing political rivalries associated with party nominations and the lack of transparency in the nomination process (Dhaka Tribune, 15 November 2021). For more, see this ACLED report on violent political rivalries in the country.

Lastly in India, security forces intensified operations against militants in J&K last week. At least three militants from Hizb-ul-Mujahideen (HM) (including a commander) and Ansar Ghazwat-ul-Hind (AGuH) were killed during three operations in Kulgam and Srinagar districts. The operations follow three attacks by unidentified militants in Srinagar city and in Kulgam district, leading to the death of a shopkeeper from the Kashmiri minority and the injury of at least two other civilians. Meanwhile, the government deployed over 5,500 additional Central Armed Police Forces to the Kashmir Valley, and redeployed Border Security Forces (BSF) from the border to towns to enhance the “security and visibility” of the Indian forces (The Tribune, 9 November 2021). The measures were implemented amid increasing militant attacks on civilians from minority groups and migrant laborers in the past month.

Elsewhere in India, Maoist violence continued in Chhattisgarh state, where rebels targeted civilians last week. Communist Party of India-Maoist (CPI-Maoist) militants killed a civilian, accusing him of being a police informer, and abducted five villagers from a rural area, where the rebels have previously opposed development works and increased police presence. Civilian attacks and encounters with police forces contributed to an overall surge in violence in Chhattisgarh (see ACLED’s Early Warning Research Hub for more).