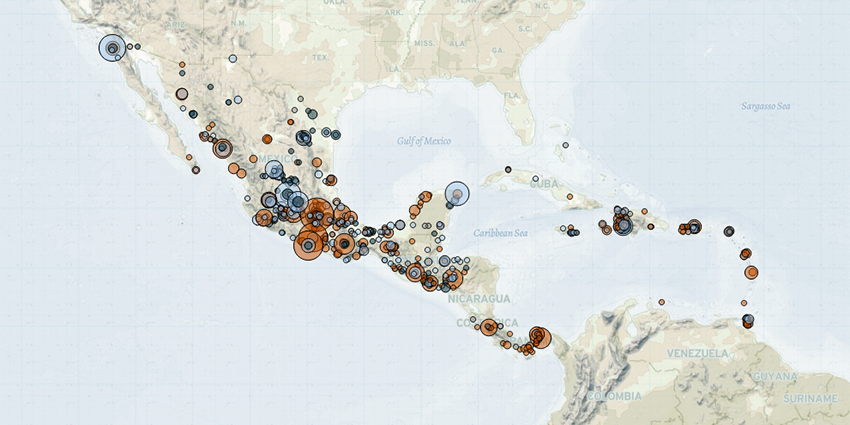 Last week in Mexico, Central America, and the Caribbean, violence remained high amid ongoing gang-related violence in Haiti, Mexico, and El Salvador. In Haiti, gang violence continued in Port-au-Prince in the days prior to the G-9 gang alliance’s announcement of a truce on 12 November. In Mexico, gang violence increased last week in Michoacan, Zacatecas, and Guerrero states, driven by clashes between criminal groups, state forces, and attacks against civilians. In El Salvador, political violence spiked last week, following several gang-related attacks. In Puerto Rico, violence against civilians continued last week amid attacks by criminal groups. Meanwhile, in Honduras, unidentified gunmen killed two politicians in separate attacks weeks ahead of the general elections of 28 November. In Nicaragua, several critics of the government and journalists were arrested on the eve and the day of presidential elections held on 7 November.

In Haiti, gangs continue to show their control over neighborhoods in Port-au-Prince, launching attacks on civilians and clashing with state forces last week, before declaring a temporary truce on 12 November. Between 8 and 9 November, police clashed with members of the G-9 gang alliance near the Varreux oil terminal in a failed attempt to retake control of roads that the G-9 has blocked for the past month (Miami Herald, 13 November 2021). Meanwhile, gangs continued attacks on civilians amid ongoing inter-gang rivalries in multiple neighborhoods in Port-au-Prince. Amid continuous clashes between the Ti Bwa Gang and the G-9-allied Gran Ravine Gang in Martissant neighborhood, members of unidentified gangs attacked vehicles traveling on National Road 2, leaving at least three people dead and several injured in separate attacks. Also, members of the G-9 carried out a shooting against government buildings in the Port-au-Prince city center on 10 November. Following these attacks, G-9 leader Jimmy Cherizier announced a week-long truce on 12 November, lifting roadblocks around the Varreux oil terminal to allow the resumption of fuel distribution (Al Jazeera, 12 November 2021). According to local sources, the truce was the result of agreements between government officials and the G-9, though concrete details of the negotiations remain unknown (Le Nouvelliste, 12 November 2021). The government denies any engagement with gangs (Reuters 13 November 2021). Despite the temporary truce, Cherizier continues to demand the resignation of Prime Minister Ariel Henry, accusing Henry of being involved in the assasination of former President Jovenel Moise. (AP, 13 November 2021). This violence contributed to a 60% increase in violence in Haiti last week relative to the month prior (see ACLED’s Early Warning Research Hub for more).

In Mexico, the Jalisco New Generation Cartel (CJNG) escalated its offensive in Michoacan state last week, attacking communities in the municipalities of Tepalcatepec and Chinicuila. Members of the CJNG opened fire on houses in Villa Victoria in Chinicuila municipality on 8 November, leading to clashes with members of the local self-defense group and National Guard officers. Similar clashes were reported when the CJNG staged attacks on the communities of Taixtan, Plaza Vieja, and ​​El Cansangue in Tepalcaltepec municipality on 9 November. These attacks caused the displacement of around 1,500 families across both municipalities (El Universal, 9 November 2021). The CJNG also killed seven civilians and left their dismembered bodies in Ciudad Hidalgo with threatening messages against the local criminal group Los Correa. The CJNG is seeking to expand its control over the production of synthetic drug and drug trafficking routes in Michoacan state, disputing areas with local criminal groups and self-defense groups that have sought to push back the expansion of the CJNG (Infobae, 26 October 2021). ACLED records a spike in violence in Michoacan last week with more than twice the number of violent events compared to the week prior.

Elsewhere, in Zacatecas state, gang violence increased amid clashes between criminal groups and state forces, contributing to a 129% increase in violence in the state last week relative to the month prior (see ACLED’s Early Warning Research Hub for more). In Loreto municipality, members of a criminal group kidnapped the director of the municipal police along with two police officers. Also, the arrest of a leader of a local criminal group triggered clashes in Villa Garcia municipality and nearby areas where criminal groups also set vehicles on fire to block roads. Zacatecas state is a strategic location for the production and trafficking of synthetic drugs, connecting the center of the country with roads that lead to the border with the US (Sin Embargo, 14 August 2021).

Meanwhile, in Guerrero state, gang violence increased last week, following several gang attacks against civilians, contributing to a 146% increase in violence in the state last week relative to the month prior (see ACLED’s Early Warning Research Hub for more). The majority of violence took place in Acapulco, where unidentified gunmen shot at the house of the local deputy of the National Regeneration Movement (MORENA) on 7 November. Though the deputy was unharmed, the perpetrators left threatening messages outside her house (El Pais, 8 November 2021). Criminal groups also killed at least seven people in the state last week in two separate attacks, leaving the victims’ dismembered bodies in neighborhoods of Acapulco. Violence in this city is mostly related to the operation of local criminal groups that dispute the control of local drug markets and extortions (Sin Embargo, 29 October 2021).

In El Salvador, violence spiked last week, more than doubling the number of violent events compared to the previous week. This upsurge of violence is mostly driven by inter-gang killings, most of them recorded in San Salvador department, which was home to a 129% increase in violence last week relative to the month prior (see ACLED’s Early Warning Research Hub for more). According to local experts, the escalation of gang rivalries comes after a break in negotiations involving the Mara Salvatrucha (MS-13), factions of the Barrio 18 gang, and the government (Infobae, 13 November 2021). Though the government denies such negotiations, investigations of local newspapers have shown evidence of agreements between gangs and government officials to reduce violence in exchange for improved prison conditions for imprisoned gang members (InSight Crime, 24 August 2021). President Nayib Bukele announced on 12 November the deployment of 40,000 officers of the police and military forces to reinforce security, amid concerns around escalating homicide rates (EFE, 13 November 2021).

Similarly, in Puerto Rico, violence against civilians continued last week, resulting in a 100% increase in violence in San Juan district  last week relative to the month prior.  The authorities attribute the recent upsurge of violence to the actions of criminal groups that dispute the control of drug markets (El Nuevo Dia, 1 November 2021). Since June 2021, ACLED records an increasing trend in violence in Puerto Rico.

In Honduras, violence against local politicians and government officers increased last week, ahead of general elections scheduled for 28 November, contributing to a 64% increase in violence in Honduras last week relative to the month prior (see ACLED’s Early Warning Research Hub for more). In Talanga, Francisco Morazan department, unidentified armed men shot and killed a local politician and member of the National Party of Honduras (PNH) on 6 November. The victim worked for the mayor of Talanga municipality, who was recently arrested under money laundering charges (La Prensa, 6 November 2021). Days after the attack, unidentified suspects killed a local Liberal Party of Honduras (PLH) councilor in Santiago de Puringla municipality. Such attacks are often related to local leadership disputes within political parties, and to the actions of criminal groups that seek to maintain control of local politics to favor their criminal activities (El Heraldo, 28 July 2021; IUDPAS, November 2021). Thus far in 2021, ACLED records 22 attacks against politicians, government officers, and candidates, resulting in 19 deaths. The targeted killing of politicians during election years has historical precedence in Honduras. In the nine months prior to the 2017 elections, the University Institute in Democracy, Peace, and Security (IUDPAS) recorded the killings of seven politicians (IUDPAS, February 2018).1ACLED coverage of Honduras begins in 2018, so comparison numbers from ACLED in the lead up to the 2017 election are not available.

In Nicaragua, President Daniel Ortega claimed victory in the presidential election held on 7 November, amid the arrests of opposition politicians, journalists, and social leaders. Last week, police forces raided the house of a member of the opposition party Civic Alliance for Justice and Democracy (ACJD) in Nindiri, also arresting other members of the ACJD in other municipalities. Civil society organizations monitoring the elections report the arrest of 35 politicians, journalists, and social leaders between 6 and 7 November (Swissinfo, 12 November 2021). President Ortega claims to have been re-elected with 75% of the votes, though reports suggest that more than 80% of the population did not participate in the elections (France 24, 8 November 2021).