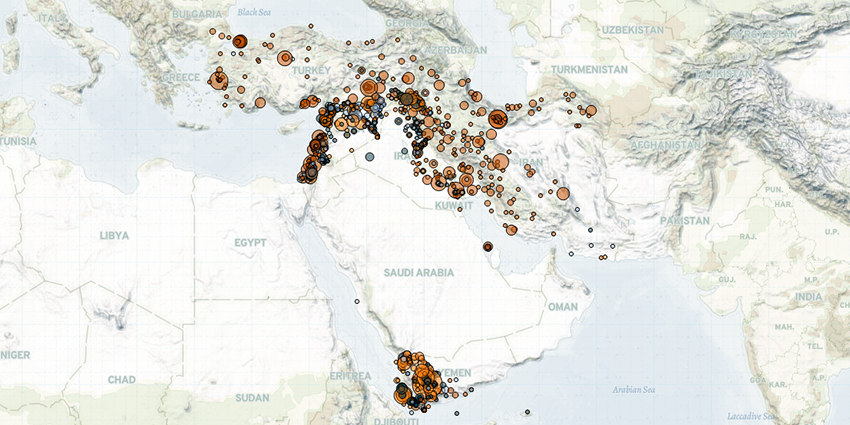 In Yemen, Houthi forces took control of around 70 km of coastal strip along the Red Sea in Hodeidah governorate last week, following the unexpected withdrawal of Saudi-led coalition-backed National Resistance Forces. This effectively left Houthi forces in control of all districts of Hodeidah city, as well as Ad Durayhimi district to the city’s south. While National Resistance Forces claim that this redeployment was carried out within the framework of the Stockholm Agreement1 In December 2018, the UN brokered the Stockholm Agreement to stop an offensive against Houthi forces along the west coast, fearing the humanitarian consequences of a battle for Hodeidah city (OSESGY, December 2019). The agreement included a ceasefire throughout the governorate and the demilitarization of Hodeidah city. In January 2019, a UN mission was established to monitor the implementation of the agreement, which has never materialized., these movements came as a surprise to both the UN and the Hadi government (Yemen News Agency, 12 November 2021; UNMHA, 12 November 2021). According to some observers, the decision to withdraw was dictated by the Saudi-led coalition (Twitter @Ibrahim4Yemen, 13 November 2021).

The withdrawal of National Resistance Forces from their positions in Hodeidah governorate came amidst further movements of Saudi-led coalition forces in southern Yemen. After their withdrawal from Shabwah governorate and from a number of military bases in Al Mahrah the week prior, Saudi-led coalition forces also withdrew from their main base in Aden last week.

In Syria, a Global Coalition drone strike targeted and killed two IS militants in Jarablus in Aleppo province. Meanwhile, Russian airstrikes continued on the Idleb enclave last week with several airstrikes impacting the outskirts of Ma’arrat Tamasrin in Idleb, killing a displaced family of five. In northeast Syria, a Turkish drone strike targeted a vehicle belonging to a member of the Syrian Democratic Forces (QSD) in Al Hilalia neighborhood of Quamishli city in Al Hasakeh. The target was not in the vehicle at the time of the attack, in which three members of his family were killed. Turkish airstrikes on the eastern Al Hasakeh countryside are not common and come amid heightened tensions between Turkey and QSD in northern Syria.

In Iraq, unknown militants used three explosive-laden drones to target the Prime Minister of Iraq Mustafa Al Kadhimi at his residence in the Green Zone of Baghdad city last week. Security forces intercepted two of the three drones. The third drone detonated, injuring seven members of Al Kadhimi’s security detail, though there were no reported fatalities. The blast also caused material damage to the building and to vehicles outside (The Guardian, 7 November 2021). Two Iraqi security officials accused Kataib Hezbollah (KH) and Asaib Ahl Al Haq of being responsible for the attack (Reuters, 8 November 2021). This follows an indirect fire attack on Al Khadimi’s delegation to the National Intelligence Agency in Baghdad the previous week.

Teachers protested across more than 20 provinces in Iran last week, calling for improved working conditions, the implementation of a salary ranking plan, and the payment of bonuses. The renewed protests come as teachers struggle to make a living amid skyrocketing prices and low wages (Iran News Update, 11 November 2021). Teachers have been protesting since last year, but Iran’s regime has yet to respond to their demands. The implementation of the ranking plan would increase salaries by 30 to 70 million rials (approximately 700 to 1,600 USD) a month, depending on whether teachers hold a master’s degree (Iran Focus, 2 November 2021). On 31 October, the Iranian parliament refused to implement the ranking plan for a second time, returning it to the commission of education for revision (Arab News, 1 November 2021). While protesters were peaceful, police dispersed a protest in Tehran attended by both active and retired teachers and arrested two protesters.

Last week in Turkey, nationalist and pro-government groups staged dozens of protest events against a lawmaker of the Iyi Party — a nationalist secularist political party — after a video surfaced online of him swearing at a protester in the eastern province of Bingol. The incident occurred at a protest against the Iyi Party’s collaboration with the pro-Kurdish Peoples’ Democratic Party (HDP). The lawmaker has since resigned from his position (Hurriyet Daily News, 8 November 2021).