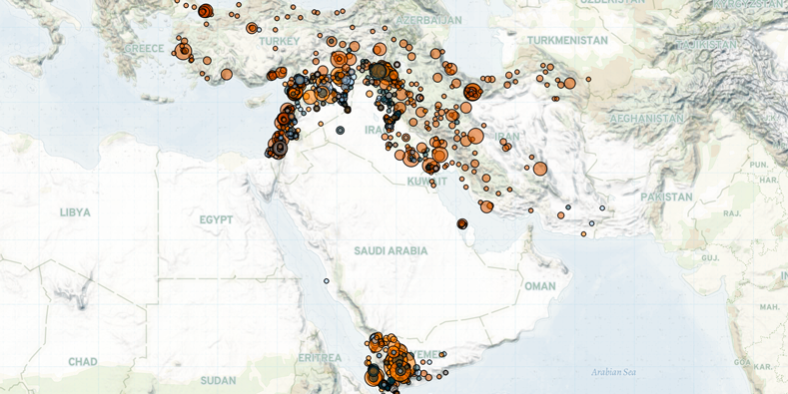 Last week in the Middle East, Houthi forces continued their advance in Marib governorate in Yemen, while Al Qaeda in the Arabian Peninsula (AQAP) claimed several operations in Al Bayda governorate. In southern Yemen, Emirati and Saudi forces withdrew from a number of bases in Shabwah and Al Mahrah governorates. In Iraq, a shelling barrage targeted the Iraqi Prime Minister Mustafa Al Kadhimi’s delegation during a visit in the Mansour district of Baghdad. Meanwhile, in Syria, Russian forces continued aerial attacks in the Idleb enclave. Lastly, Israeli security forces killed a Palestinian teenager during clashes with demonstrators near an Israeli settlement, in the same week that Israeli parliament approved a state budget after three years.

In Yemen, political violence increased significantly in Marib governorate last week, reaching some of its highest levels recorded since the launch of the Houthi offensive in February 2021. Despite sustained Saudi-led coalition airstrikes, Houthi forces continued to advance in Al Jubah district and reached the outskirts of Marib district near the Balaq mountain range. Houthi forces also advanced towards the Balaq mountain range from Sirwah district, uniting with their forces in Al Jubah district.

In Al Bayda governorate, AQAP carried out two operations targeting Houthi forces last week. The attacks followed two other attacks carried out the week prior. Alongside an attack earlier in October, these are the first operations claimed by AQAP in Al Bayda since August 2021. This contributed to a 267% spike in violence last week relative to the past month (see ACLED’s Early Warning Research Hub for more). The reason behind this quiet period by AQAP and the sudden resurgence in violence is unclear.

Elsewhere in Yemen, pro-Hadi forces took control of Al Alam military camp in Shabwah governorate last week following the withdrawal of Emirati forces and initial clashes with pro-Southern Transitional Council (STC) forces the week prior. Emirati forces also withdrew from the coastal Balhaf facility in the governorate while Saudi forces left their base in Ataq airport, representing a complete withdrawal of Saudi-led coalition forces from Shabwah. In Al Mahrah governorate, Saudi forces evacuated several of their military camps to regroup at their main base in Al Ghayzah airport. According to local sources, Emirati forces withdrew as a result of tensions with pro-Hadi authorities and a potential push into Shabwah by Houthi forces, while the Saudi withdrawals might be linked to Saudi-Iran talks (South24, 31 October 2021).

In Iraq, security forces and rioters exchanged live fire during a demonstration by Fatah Alliance supporters in the Green Zone in Baghdad city last week. Security forces shot and killed at least three demonstrators and injured 35 others. Dozens of the security forces were also injured in the clashes. The demonstrators oppose the results of parliamentary elections on 10 October and demand a recount of votes (Al Jazeera, 5 November 2021). Meanwhile, on 31 October, unknown militants launched three rockets targeting Prime Minister Al Kadhimi during a visit to the headquarters of the National Intelligence Agency headquarters in Mansour district in Baghdad. While indirect fire attacks on Baghdad’s Green Zone are not uncommon, they are usually carried out by Iran-aligned militia groups to put pressure on the US rather than targeting the prime minister himself.

In Syria, Russian warplanes continued their aerial campaign in northwest Syria last week. Russian forces launched 10 airstrikes on Idleb’s Qah, near the Turkish border, where many IDP camps are located, though no casualties were reported. Meanwhile, Turkish forces launched several airstrikes on Syrian Democratic Forces (QSD) positions in northern Syria, including positions in Ar-Raqqa and Al Hasakeh. In southern Syria, Israeli forces launched airstrikes and surface-to-surface missiles at regime, Hezbollah, and other Iranian militia positions in Rural Damascus, leaving casualties. This contributed to a 286% spike in violence last week in Rural Damascus relative to the past month (see ACLED’s Early Warning Research Hub for more).

In Palestine, Israeli military forces killed a 13-year-old boy during clashes with rioters demonstrating against Israeli settlements near Elon Moreh last week. Elon Moreh is an Israeli settlement that recently received planning permission for 100 new homes from the Israeli government (Times of Israel, 21 October 2021). An Israel Defense Forces spokesperson suggested that soldiers responded with live fire after rioters threw stones at them (Times of Israel, 5 November 2021). Israeli soldiers’ ongoing use of live ammunition as a method of crowd control against stone-throwing Palestinians is frequently criticized by human rights organizations (B’Tselem, 21 April 2021).

Lastly, in Israel, the Knesset narrowly approved a state budget last week for the first time in more than three years, averting the threat of a new election (Jerusalem Post, 4 November 2021). A political victory for Prime Minister Naftali Bennett’s diverse coalition government, experts suggest that this can bring some political stability to the country after an unprecedented period of political chaos and stalemate (Washington Post, 4 November 2021).