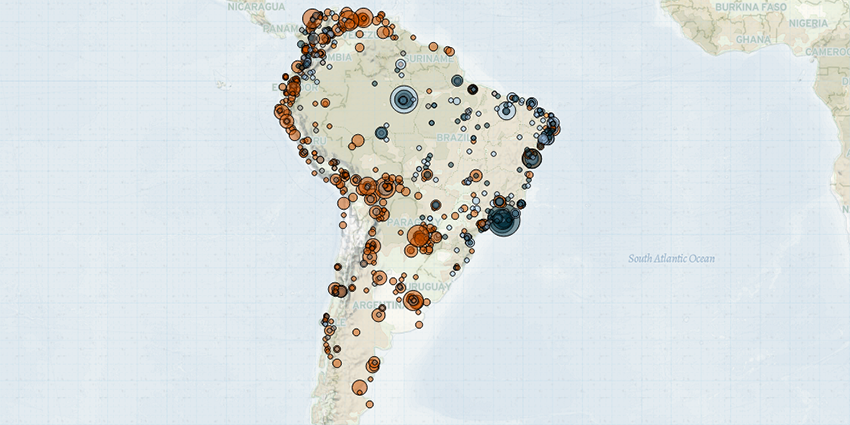 Last week in South America, political violence slightly increased compared to the week prior, while demonstration events significantly decreased. In Argentina, government supporters marched near the presidential palace to celebrate Peronist Activism Day on 17 November, days after the government lost control of the senate in midterm elections on 14 November. In Bolivia, opposition groups took to the streets for the second consecutive week against controversial money laundering legislation. In Brazil, police clashed with Indigenous demonstrators in Roraima state during an operation to remove roadblocks set by the group to halt illegal land invasions in their territory. In Colombia, armed clashes between state forces and dissidents of the Revolutionary Armed Forces of Colombia (FARC) continued in the Cauca department.

In Argentina, thousands of people gathered around the presidential palace, Casa Rosada, to celebrate Peronist Activism Day on 17 November, which was called by President Alberto Fernández (La Nación, 17 November 2021). The date marks the return of former President Juan Domingo Perón to Argentina in 1972, after 18 years exiled in Spain. The march took place three days after the midterm general elections of 14 November, in which the current leftist Peronist government, the Frente de Todos coalition, lost their majority in the Senate (La Prensa, 17 November 2021). The coalition, made up of Peronist and leftist parties, is set to drop from 41 to 35 seats in the 72-member senate (Infobae, 14 November 2021). This is the first time that Peronists have lost their senate majority since 1945 (except for undemocratic moves in the 1955-1973 era) (MDZ, 2 November 2020).

In Bolivia, labor unions and organizations opposed to the government took to the streets last week for the second consecutive week to protest controversial legislation regulating the illicit movement of money. The groups continue to demand the annulment of the “Law against Illicit Earnings and the Financing of Terrorism” (Law 1386), which the government claims would regulate the movement of money to comply with international standards against illicit enrichment (France24, 12 October 2021). However, labor unions object to a provision that grants discretionary powers to the executive branch to modify the legislation without the validation of Congress, bolstering state-owned companies against the private sector (BBC, 17 November 2021). On 16 November, after several days of demonstrations, the Bolivian parliament voted in favor of repealing Law 1386 (BBC, 17 November 2021).

In Brazil, at least seven Indigenous people were injured when Macuxi Indigenous demonstrators clashed with state forces in Roraima state last week. Police claim the Indigenous group attacked them with arrows and stones when they responded to a call to dismantle a roadblock near the Raposa do Sol community. On the other hand, representatives of the Macuxi people claim the police destroyed personal property, illegally seized their equipment, and used firearms against them (Ponte Jornalismo, 18 November 2021). Indigenous communities are monitoring and restricting access to their lands with watchpoints and roadblocks in response to the state’s failure to prevent illegal mining and other irregular activities in Indigenous territories (Ponte Jornalismo, 18 November 2021). The number of Indigenous land invasions across the country have increased under President Jair Bolsonaro’s administration (Folha de S. Paulo, 24 September 2019). This trend has been exacerbated by soaring gold prices and COVID-19 quarantine measures that have curbed government efforts to prevent illegal land invasions (Nexo Jornal, 19 April 2020).

Meanwhile, violence spiked 146% in the state of Rio Grande do Norte last week relative to the month prior (see ACLED’s Early Warning Research Hub for more). At least 11 fatalities were reported last week, stemming from attacks against civilians and armed clashes between unidentified crime groups. The number of violent events in Rio Grande do Norte state has soared in recent years due to the strengthening of organized crime groups fighting over territorial control of its urban areas (BBC, 10 August 2019). In recent years, Brazil’s major organized crime groups expanded to the northeast of the country. The expansion triggered the creation of new local criminal organizations in the region, leading to a high number of violent events related to drug trafficking disputes in recent years (BBC, 10 August 2019).

Finally, in Colombia, clashes between security forces and armed groups were reported in the Cauca, Antioquia, and Norte de Santander departments last week. In Cauca, FARC dissidents raided a police station in El Camelo town. One civilian was injured during the resulting clash, as FARC dissidents used residents’ houses to shelter during the fighting. There are currently an estimated 43 dissident FARC structures and 5,200 fighters who have not complied with the 2016 Peace Agreement with the government and subsequent demobilization in 2017 (INDEPAZ, 4 October 2021).