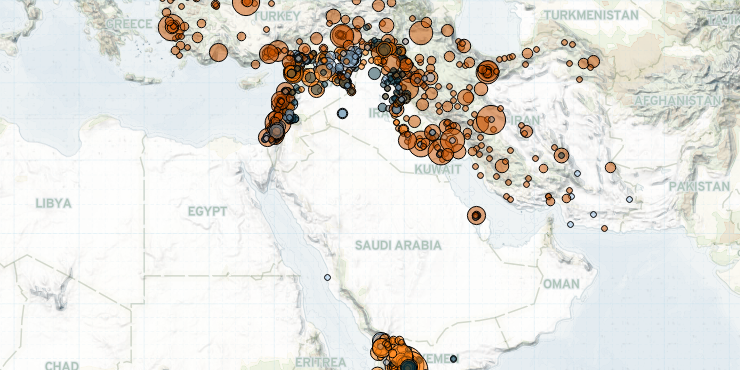 Last week in the Middle East, anti-Houthi forces made significant gains in the western fronts of Yemen while Houthi forces continue to stall in Marib governorate. Saudi-led coalition airstrikes also targeted strategic Houthi sites throughout the country. In Syria, an IED detonated at the Nasib border crossing between Syria and Jordan. Meanwhile, in Iraqi Kurdistan, demonstrations demanding the reinstatement of financial support for university students turned violent, forcing the regional government to pledge the resumption of aid. In Israel and Palestine, two separate attacks by Palestinians against Israelis in East Jerusalem and Jaffa threaten to escalate tensions between Israel and Palestine. In Jordan, protests erupted against a water-for-energy deal signed with Israel.

In Marib governorate, clashes decreased significantly last week driving political violence down to levels last recorded in early September 2021. Houthi forces did not make any territorial advancement for the second consecutive week — something that had not occurred since early August 2021. This took place as the Saudi-led coalition announced that it had sent further reinforcements to face Houthi forces in the governorate (Aden al Ghad, 24 November 2021).

Throughout last week, Saudi-led coalition airstrikes targeted Houthi drone and ballistic missile infrastructure. This contributed to a 300% spike in violence last week relative to the past month in Amanat al Asimah governorate (see ACLED’s Early Warning Research Hub for more). According to Houthi sources, this included a strike that killed two people in Sanaa city (Xinhua, 24 November 2021). At the same time, no Houthi aerial attack on Saudi Arabia has been recorded since 21 November, potentially signaling that these airstrikes have impacted Houthi air capacities.

In southern Yemen, reports last week suggest that United Arab Emirates (UAE) forces have arrived on Abd al Kuri island of the Socotra archipelago, located between Socotra island and Somalia, to establish a new military base (Socotra Post, 23 November 2021). UAE ships were also reported to have offloaded hundreds of fighters loyal to the secessionist Southern Transitional Council (STC) at Balhaf port in Shabwah (Aden News Agency, 25 November 2021) amid mounting Hadi-STC tensions in the governorate. Earlier this month, a prominent tribal figure returned to Shawbah after years of absence from the country and has been galvanizing anti-Hadi sentiments, asking for the removal of the pro-Hadi local authority (South24, 16 November 2021).

In Syria, Russian forces continued their aerial bombardment on northwest Syria last week with two airstrikes recorded in Harim district, where airstrikes are uncommon, bordering Turkey. Four civilians were killed in the two strikes and two others were killed in strikes elsewhere in the province. In southern Syria, an unidentified armed group detonated an IED at the Nasib border crossing in Dar’a, targeting a regime security command center. There were no casualties reported (North Press Agency, 20 November 2021).

In Iraq, students demonstrated in Sulaymaniyah, Dohuk, and Erbil provinces last week, demanding that the Kurdistan Regional Government (KRG) reinstate university student stipends, suspended in 2014. The students also complained about bad living conditions in university dormitories and other lacking services. While most demonstrations remained peaceful, some escalated into rioting. Clashes between students and security forces were reported in Saidsadiq, Halabja, and Sulaymaniyah cities, with security services using live ammunition and tear gas to disperse demonstrators. Rioters set fire to the party offices of the Kurdistan Democratic Party and the Patriotic Union Party in Sulaymaniyah. The offices of the Rudaw news station in Sulaymaniyah were similarly set on fire. In response to the demonstrations, the government pledged to reinstate the financial support, though without providing a timetable for doing so (Al Jazeera, 24 November 2021). In Baghdad, armed members of two unidentified tribal militias clashed in Al Risafa, Al Thawra, and Al Kadhmiyah districts, leading to the intervention of the Iraqi Federal Police and the arrest of several gunmen, though no casualties were reported. These clashes contributed to a 144% increase in violence in Baghdad province last week relative to the month prior (for more, see ACLED’s Early Warning Research Hub). The reason behind the eruption of clashes remains unclear, however.

In Israel, a Palestinian stabbed and injured a Jewish man in Jaffa last week. The perpetrator, a West Bank Palestinian who illegally crossed into Israel, fled the scene before being arrested by Israeli police forces shortly thereafter. Meanwhile, Israeli Arab women organized several marches around the country to protest violence against Arab women in Israel. These marches coincided with International Day for the Elimination of Violence against Women on 25 November.

In Palestine, Israeli security forces shot dead a Hamas-affiliated Palestinian gunman after he carried out a deadly shooting attack near the Western Wall in East Jerusalem’s Old City last week. The assailant used an automatic weapon to kill one Israeli civilian and injure two others. Two police officers were also wounded in the attack. Following the attack, riots broke out at the Shuafat Refugee Camp in East Jerusalem after Israeli police forces arrested members of the assailant’s family (Jerusalem Post, 21 November 2021).

In Jordan, dozens of protest events erupted around the country last week against a water-for-energy declaration of intent signed between Jordan and Israel. Under this agreement, Jordan would receive 200 million cubic meters of desalinated water from Israel in exchange for 600 megawatts of electricity (Reuters, 26 November 2021). Critics of the deal oppose further normalization of ties with Israel amid ongoing disputes over the Occupied Palestinian Territory, and also worry it would force Jordan to be too reliant on Israel (Al Jazeera, 26 November 2021). The agreement, if ultimately put into effect, would be one of the biggest collaboration projects between the countries since the 1994 peace treaty.