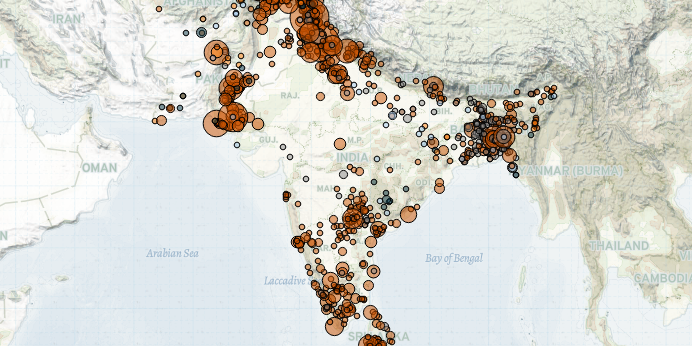 Last week in South Asia and Afghanistan, the Islamic State (IS) and unidentified groups continued to attack Taliban forces in Afghanistan, while protests took place demanding women’s rights and economic development in the country. In Pakistan, Baloch separatists attacked security forces and workers in Balochistan province. Incidents of Naxal-Maoist violence increased in India, as Naxal-Maoists called for a shutdown strike in five states. In Bangladesh, election-related violence continued and increased prior to the third round of the village council polls on 28 November.

In Afghanistan, IS and unidentified groups continued to attack the Taliban last week, with IS killing at least three Taliban members in Jalalabad city and injuring several more with a magnetic mine in Kabul city. The majority of attacks against the Taliban, however, continue to be unclaimed. Unidentified groups killed at least nine Taliban members in Kandahar, Takhar, and Helmand provinces. In Kandahar province, unknown attackers reportedly beheaded Taliban members in Kandahar (Dand) district (Twitter @Reporterly, 25 November 2021). Since the Taliban took power in August 2021, they have restricted the flow of information about such events with various restrictions on media, such as requiring journalists and news agencies to obtain permissions before publishing news and reports (VOA, 12 October 2021). ACLED records over a dozen incidents where Taliban members have attacked journalists and have closed radio stations since mid-August. Similarly, the Taliban ordered television channels last week to stop showing dramas featuring women actors (RFE/RL, 22 November 2021).

Additionally, there was a slight increase in the number of protest events last week. Small groups of women protested against Taliban policies violating women’s rights in Kabul and Rukha districts. Most of the protests took place on the International Day for the Elimination of Violence Against Women on 25 November. Meanwhile, hundreds of demonstrators gathered in Khost city, calling on the international community to lift economic sanctions on the Taliban government. The protesters also demand the Taliban government to resume development projects (Pajhwok News, 23 November 2021).

In India, Naxal-Maoist attacks continued to rise in the Red Corridor last week, as rebels called for a nationwide three-day shutdown strike on 23 November covering Bihar, Jharkhand, Chhattisgarh, Uttar Pradesh, and Odisha states (Times of India, 20 November 2021; Avenue Mail, 23 November 2021). The shutdown strike was called in response to the deaths of 27 Naxal-Maoists in an exchange of fire with police in Maharashtra on 13 November and the arrest of Naxal-Maoist leader Prashant Bose on 12 November (Times of India, 20 November 2021). In Jharkhand and Bihar states, Communist Party of India (Maoist) members engaged in remote violence targeting a police station, buildings, a coal-laden truck, and a railway line, though no casualties were reported during the explosions. Naxal-Maoists also exchanged fire with police in Jharkhand and Chhattisgarh states, during which one Naxal-Maoist commander was killed. The attacks in Jharkhand contributed to a 200% spike in violence in the state last week relative to the past month (for more, see ACLED’s Early Warning Research Hub). Despite the recent spike in violence, there has been a steady decline in Naxal-Maoist activity since 2020 due to a lack of resources (for more on Naxal-Maoist violence, see this ACLED analysis on Naxal-Maoist Insurgency Trends). According to police sources, recruitment of new members has significantly declined in all states except for Chhattisgarh, which has traditionally been the Naxal-Maoist stronghold (The Quint, 28 November 2021).

Lastly, in Bangladesh, rival political party members and supporters engaged in pre-election violence ahead of the third phase of the village council elections on 28 November. At least seven people died during clashes and targeted attacks last week, contributing to a significant rise in violence, particularly in Chittagong and Dhaka divisions (see ACLED’s Early Warning Research Hub for more). Most incidents involved members and supporters of the ruling Awami League (AL) party and independent candidates, who make up the majority of opposition candidates. The traditional rival of the AL, the Bangladesh Nationalist Party (BNP), has boycotted the local elections alleging unfair electoral practices (Anadolu Agency, 11 November 2021). Polls in Bangladesh are usually accompanied by violence due to the highly contested political landscape and frequent accusations of misconduct and election irregularities (Al Jazeera, 11 November 2021).