8 December 2021: Three years ago, in partnership with the Strauss Center for International Security and Law, ACLED released new data capturing political violence targeting women (PVTW), revealing the wide range of types and perpetrators of politically motivated attacks on women and girls.1 At the time, this included Africa, South Asia, Southeast Asia, and the Middle East. Building on that work, ACLED has now expanded the data — reviewing over 11,000 PVTW events around the world — to introduce identity types for the targets of PVTW, including further detail that specifically enables the tracking of political violence targeting women in politics (PVTWIP) for the first time.

The expanded data and accompanying report — released during the UN’s 16 Days of Activism against Gender-Based Violence following both the International Day for the Elimination of Violence against Women and International Women Human Rights Defenders Day — shed new light on the threats against women participating in political processes, such as running for or holding office, supporting or voting for political candidates, leading human rights campaigns or civil society initiatives, and more.

“Even as unprecedented numbers of women are engaging in political processes, the risks they face have multiplied, and our new data confirm that physical violence targeting women in politics is on the rise around the world,” said Dr. Roudabeh Kishi, Director of Research & Innovation at ACLED. “Tracking the myriad forms this physical violence takes is crucial for identifying programs, policies, and strategies to effectively combat the full spectrum of threats — many of which are local and context-specific — in order to better facilitate and safeguard women’s political participation.”

In the absence of data-driven initiatives aimed at establishing real security equality, the gains being made by women’s increased participation in political processes could be lost. ACLED will continue to monitor PVTW and PVTWIP in real time, with all data updated weekly and made freely available to the public. 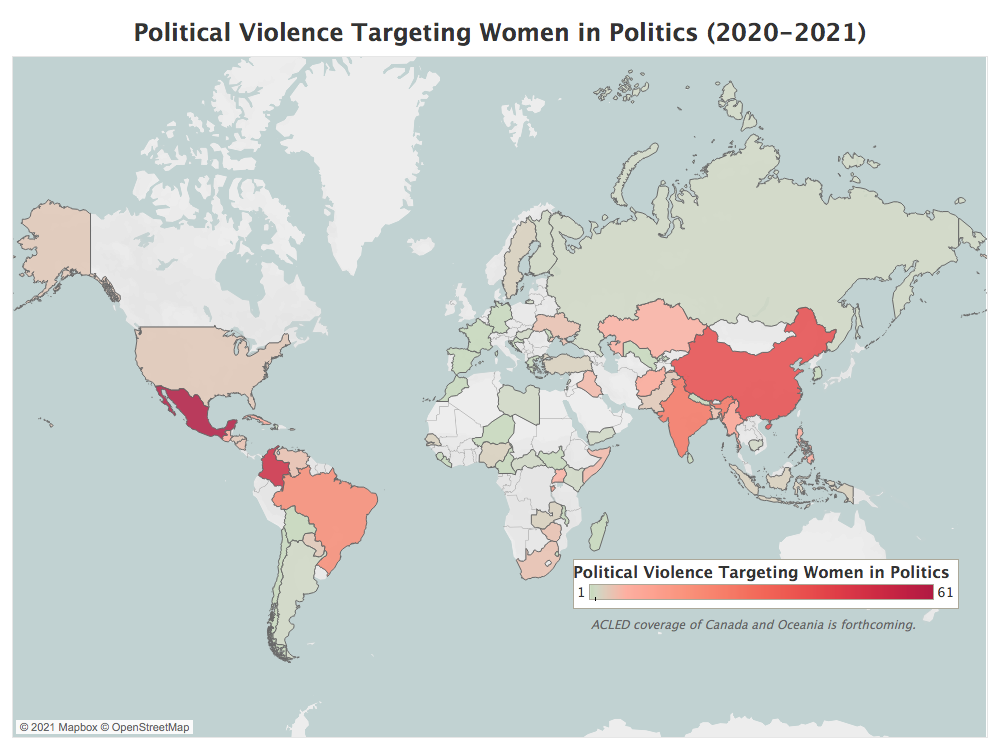 If you would like to use ACLED data and analysis, please review our Terms of Use & Attribution Policy. For more information about ACLED methodology, please check our updated Gendered Associate Actor FAQ sheet and our full Resource Library.