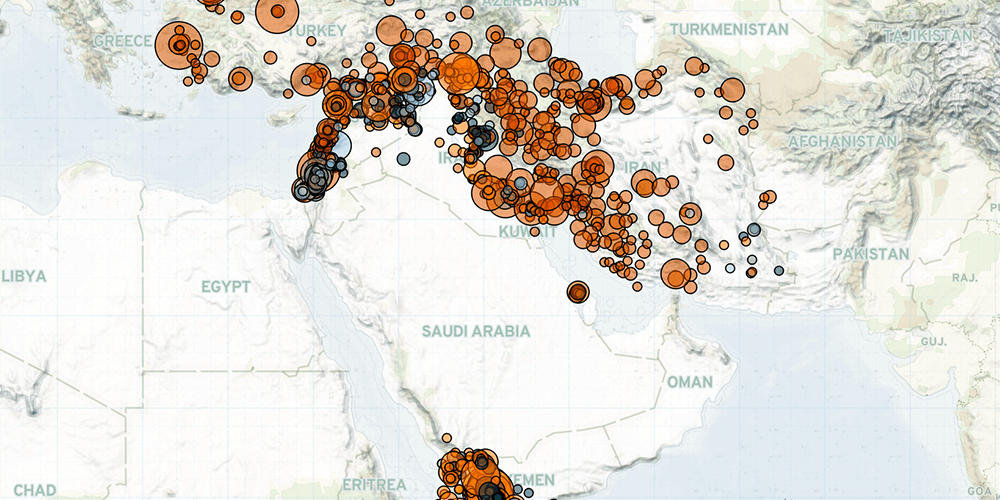 Over the past month in the Middle East, the UAE-backed Giants Brigades launched an offensive against Houthi forces in Shabwah governorate in Yemen, while Houthi forces seized a UAE-flagged vessel in the Red Sea. Also in Yemen, clashes in Marib governorate and Saudi-led coalition airstrikes on Sanaa city continued, while a Houthi air attack killed two civilians in Saudi Arabia. In the Saudi city of Jeddah, a blast of unclear origin prompted French authorities to open a terrorism probe. In Syria, Russian airstrikes on greater Idleb led to civilian fatalities. Meanwhile, pro-Iran militia groups shelled several bases and positions held by Global Coalition forces in Syria and Iraq, prompting a response from Coalition forces in Syria. Islamic Revolutionary Guard Corps (IRGC) forces clashed with Baloch militants in Iran’s southeast region. Meanwhile, Iranian teachers held nationwide protests demanding higher salaries. The Fatah and Hamas movements clashed in a refugee camp in Lebanon at a funeral procession. Elsewhere, in Palestine, numerous clashes broke out between armed Palestinians and Israeli soldiers in the West Bank, while renewed border clashes erupted in the Gaza Strip.

In Yemen, UAE-backed Giants Brigades redeployed from the west coast to Shabwah governorate over the past month and launched ‘Operation Southern Cyclone’ (Al Arabiyah, 2 January 2022). With the support of sustained Saudi-led coalition airstrikes, Giants forces recaptured both Usaylan and Bayhan districts from Houthi forces,1At the time of publication, Giants Brigade forces also captured Ain district, the last of the three districts in Shabwah that Houthi forces had taken over from pro-Hadi forces in September 2021. leading to a 563% spike in violence last week relative to the past month in the governorate (see ACLED’s Early Warning Research Hub for more). This follows the replacement of the acting Shabwah governor in late December 2021 by a tribal leader who had returned to Yemen in November, after living in the UAE for the past six years. As governor Awad al Awlaqi also enjoys close ties with the UAE-backed secessionist Southern Transitional Council (STC), this signals a new reality in Shabwah governorate at the onset of 2022: the STC now seems to be the dominant player in this former Hadi stronghold.

Conversely, political violence continued to decrease in Hodeidah governorate over the past month, reaching its lowest levels last week since April 2018. On 2 January, however, an unprecedented development took place in the Red Sea, as Houthi forces hijacked a UAE-flagged landing craft within Yemeni waters, off Zubayr island. The Saudi-led coalition denounced the event as an act of “piracy” and claim that the ship was carrying medical equipment from a field hospital (Saudi Press Agency, 3 January 2022). Houthi forces published pictures of the ship’s supposed cargo that showed armored vehicles and ammunition (Yemen Press Agency, 3 January 2022).2 Houthi forces have not yet released the ship at the time of publication.

In Marib governorate, clashes continued to the south of Marib city over the past month, centered around the eastern Balaq mountain range that was seized by Houthi forces in early December. Despite the continuation of a sustained Saudi-led coalition air campaign against Houthi forces, the frontlines remained stable. To the west of the city, pro-Hadi forces registered their first territorial gains since August 2021 last week, as clashes picked up in Al Kasarah and Al Mashjah fronts during the past month.

Elsewhere in Yemen, the Saudi-led coalition continued its air campaign against Houthi drone and ballistic missile sites in Sanaa city over the past month. Last week was the ninth consecutive week that Saudi-led coalition airstrikes hit the Yemeni capital, marking the first time this has happened since mid-2018. On 5 January, Houthi forces reported that one of the strikes killed three civilians as it hit a mosque in the west of the city.

In Saudi Arabia, Houthi forces continued to launch drone and ballistic missile attacks during the past month, one of which resulted in the death of two civilians as a Houthi projectile struck Samtah city. This is the first recorded civilian death as a result of a Houthi air attack on Saudi Arabia since June 2019. Meanwhile, on 30 December, a mysterious blast went off under a French vehicle involved in the Dakar rally in the city of Jeddah, seriously injuring the driver. While Saudi authorities claim that there were no criminal suspicions around the incident, France has opened a “terrorism investigation” into the explosion (Reuters, 4 January 2022).

In northwest Syria, Russian airstrikes impacted areas in southern and western Idleb, as well as the western Aleppo countryside, in late December and early January. A Russian airstrike on a makeshift IDP camp in Jisr Ash-Shugur area in western Idleb resulted in the deaths of 12 civilians, including three displaced children. Meanwhile, in northeast Syria, Turkish troops and the Turkey-backed Syrian National Army (JWS) increased their attacks against the Syrian Democratic Forces (QSD) along existing fronts in the Ras Al Ain area of Al Hasakeh province over the past month. Clashes and exchanges of shelling barrages led to the displacement of civilians from Abu Rasin area toward safer areas in Al Hasakeh city. In the Syrian desert, the Islamic State (IS) increased attacks against regime and pro-regime militia forces across the last three weeks in the Homs, Ar-Raqqa, and Deir ez-Zor provinces, resulting in dozens of fatalities. Four Russian soldiers were also killed in a major IS attack against a regime and Russian convoy near Al Qusaybah fields in Deir ez-Zor.

In southern Syria, unidentified gunmen continued to target civilians and regime military and security personnel across Dar’a province. Civilians were targeted in just over half of the 41 political violence incidents recorded over the past month across Dar’a, resulting in at least 19 civilian fatalities. Meanwhile, in As-Sweida city, clashes took place between regime forces and local gunmen near police headquarters in late December, resulting in the deaths of a local militia commander and a regime soldier. This comes after regime forces had arrested a man the day prior, causing unrest in the city. Separately, Israeli forces shelled a regime-controlled radar station south of Shahba town in As-Sweida countryside, killing a regime soldier and injuring others.

Meanwhile, pro-Iran militias have targeted Global Coalition forces based in Syria and Iraq on several occasions since 3 January, marking the second anniversary of the assassination of the IRGC commander Qassem Soleimani and Popular Mobilization Forces commander Abu Mahdi Al Muhandis in a US airstrike in Baghdad. In Syria, Iran-aligned militias shelled Omar oil fields in Deir ez-Zor with three rockets. Coalition forces responded with shelling the areas from which the indirect fire originated (The Washington Post, 5 January 2022). Further, between 4 and 6 January, several coalition airstrikes targeted pro-Iran militia positions across the province including in Tabni, Masrab, and Quriyeh areas, resulting in casualties. In Iraq, pro-Iran militias launched attacks targeting bases housing Coalition forces in Ain Assad Airbase in Anbar province, as well as the Victory Base Complex in Baghdad International Airport. Militias used rockets and explosive-laden UAVs in the attacks. One of the rocket attacks on Ain Assad was claimed by the Shiite militia Qasem Al Jabarin. Coalition anti-air defense systems intercepted most rockets and UAVs, and no casualties were reported in any of the aforementioned attacks (Al Jazeera, 1 January 2022).

This round of escalation follows the withdrawal of Global Coalition combat forces from Iraq on 29 December, although coalition forces continue to maintain an advise, assist, and enable force in Iraq conducting non-combat operations (The New Arab, 29 December 2021). The decision to withdraw combat forces comes after the final round of the strategic dialogue between the US and the Baghdad Government in July 2021 (Al Jazeera, 26 July 2021). Meanwhile, roadside explosive attacks targeting coalition convoys doubled over the past month when compared to the month prior. The targeting comes during the withdrawal, as unknown militants targeted coalition convoys en route to Iraq’s borders with Kuwait and Syria in Basrah and Anbar provinces.

In Iran, the IRGC clashed with Baloch militants affiliated with the Shahbakhsh tribe in the restive southeast province of Sistan and Baluchestan and in neighboring Kerman over the past month. During the hostilities, the IRGC launched an airstrike targeting the group in Rigan county, marking the first time that Iranian military forces have conducted a drone attack on Iranian soil (IranWire, 28 December 2021). A Baloch militant leader was also killed during a 24-hour IRGC siege and artillery fire in Kurin county in early January, with local sources claiming two civilians were also among the fatalities (Iran International, 1 January 2022). The predominantly Sunni Muslim Sistan and Baluchestan province near the Pakistani and Afghan borders has long been plagued by unrest from both drug smugglers and Baloch Sunni militants.

In another development, teachers held hundreds of protests across Iran demanding the implementation of a salary ranking plan that would increase their wages. In response to the protests, the Iranian parliament approved legislation on 15 December guaranteeing teachers salaries equivalent to 80% of that of university faculty members (RFE/RL, 15 December 2021). However, protesters reject the proposed raise and vow to continue their movement, suggesting the proposed raise is not sufficient amid high inflation in the country (Akhbar Rooz, 16 December 2021). The salary ranking plan demanded by teachers would increase their wages by approximately 700 to 1,600 USD a month depending on their qualifications, while the proposed increase only amounts to an increase of approximately 11 USD a month (Iran International, 16 December 2021).

In Lebanon, Fatah members opened fire on attendees at the funeral procession of a Palestinian Hamas affiliate in the Burj el Shemali refugee camp, prompting an armed clash. Four Hamas members were killed in the clashes. It is unclear why Fatah members opened fire. The Fatah and Hamas movement have long been rivals, since a 2007 election where Hamas defeated Fatah during elections in the Gaza Strip (Al Jazeera, 12 December 2021). The Fatah leadership in Lebanon has suspended all contact with Hamas since the attack (Jerusalem Post, 14 December 2021).

Also across the West Bank, there was an uptick in Israeli-Palestinian violence over the past month. Palestinians engaged in at least 10 armed clashes – including stabbing and car ramming attacks – with Israeli security forces over the past month. Attacks were also carried out against Israeli settlers, including a deadly shooting near the illegal settlement outpost of Homesh on 16 December, in which an Israeli settler was killed. An increase in settler violence was also reported near the northern city of Nablus, with settlers raiding several Palestinian villages. Amid the intensification of violence, the Israel Defense Forces issued new procedural rules for engaging with Palestinian rioters in the West Bank, allowing soldiers to shoot them even after they have thrown their weapons or have attempted to escape the scene (Times of Israel, 27 December 2021).