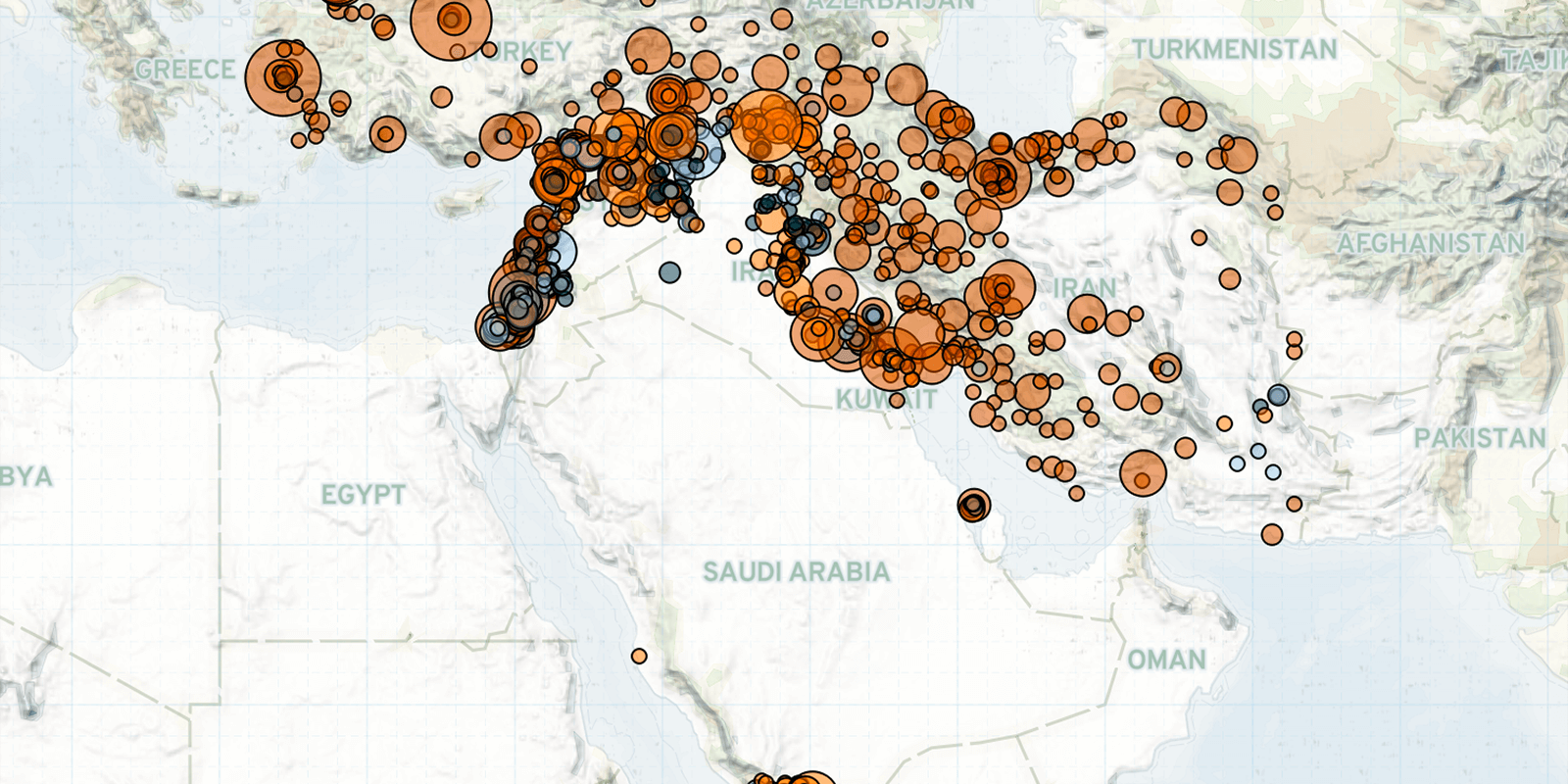 Last week in the Middle East, Giants Brigades forces entered Marib and Al Bayda governorates in Yemen after defeating Houthi forces in Shabwah. In Syria, unidentified gunmen detonated three IEDs in cities controlled by Turkey-backed factions in Aleppo province. In Iraq, Asaib Ahl Al Haq fighters discharged small arms fire to disperse rioters attempting to prevent the erection of a memorial for the late Iranian and Iraqi commanders killed by a US strike in January 2020. In Turkey, several attacks against migrants were observed. Teachers and judiciary employees carried out widespread protests in Iran, calling for improved working conditions. Meanwhile, in Palestine, a car-ramming attack injured an Israeli soldier and in a separate incident, an elderly Palestinian died after being beaten by soldiers. Nationwide protests erupted in Lebanon over worsening living and economic conditions.

In Yemen, political violence increased significantly last week, reaching the highest recorded levels since March 2021. This increase was partly due to an increase in events in Marib governorate, where Houthi forces lost large swathes of territory in the southern district of Harib to Giants Brigades forces. In the northwest of the governorate, pro-Hadi forces launched attacks against Houthi forces in the Raghwan district, while clashes between Houthi and pro-Hadi forces subsided south of Marib city around the Balaq mountain.

The Giants Brigades offensive in Harib district was made possible by their earlier defeat of Houthi forces in Ain district in neighboring Shabwah governorate last week. On 10 January, the Giants Brigades announced the end of the third phase of ‘Operation Southern Cyclone’ that they had launched at the beginning of the year, reportedly expelling Houthi forces from all their positions in Shabwah governorate (Al Amaliqah, 10 January 2022).

From newly captured areas in Shabwah, Giants Brigades forces also entered the outskirts of Al Bayda governorate in Naman district last week. Saudi-led coalition airstrike events on Al Bayda governorate also increased significantly last week,1 Note that one airstrike event can include several airstrikes and that the number of airstrikes can greatly vary from one event to another. As ACLED is an event-based dataset, ACLED records airstrike events rather than airstrikes. This ensures consistency in the data, especially given the overall rare reporting on exact airstrike counts. signaling that the next push against Houthi forces may focus on Al Bayda. Elsewhere in the governorate, Al Qaeda in the Arabian Peninsula (AQAP) claimed three IED attacks targeting Houthi forces in As Sawmaah and Dhi Naim districts. These were the first AQAP claims of 2022. The above events resulted in a 744% spike in violence last week relative to the past month in Al Bayda governorate (see ACLED’s Early Warning Research Hub for more).

In Saudi Arabia, last week was the first week since November 2021 that the country was not the target of Houthi air attacks. It was also the first week since November 2021 that no Saudi-led coalition airstrikes on the Yemeni capital, Sanaa, were reported. One coalition airstrike event did, however, hit a hospital to the south of Sanaa city, injuring four medical staff.

In Syria, several IEDs were detonated by unidentified armed groups in areas controlled by Turkey-backed forces in Aleppo province, including in Afrin, Azaz, and Al Bab cities. Two opposition fighters and one civilian were killed, and several other civilians were wounded in the attacks. Meanwhile, Turkish drones launched several airstrikes on Ain Al Arab city and countryside in eastern Aleppo. Most of the airstrikes targeted Syrian Democratic Forces (QSD) positions in the city and nearby villages, while one airstrike impacted a civilian area and wounded two civilians. In the Idleb enclave, regime forces stepped up indirect fire attacks on the Idleb countryside, prompting opposition rebels to respond with artillery and rocket fire. There were no Russian airstrikes reported last week on the enclave. This contributed to an increase of 119% in violence in Idleb last week relative to last month (for more, see ACLED’s Early Warning Research Hub).

In eastern Syria, clashes and exchanges of shelling barrages between the Syrian National Army (JWS) and Turkish forces on one hand and QSD on the other increased last week in the Tell Abiad area of Ar Raqqa, although no advances were made by either side. This contributed to an increase of 142% in violence in Ar Raqqa last week relative to last month (for more, see ACLED’s Early Warning Research Hub).

In Iraq, 150 to 200 rioters attempted to prevent the erection of a memorial for the late Islamic Revolutionary Guard Corps commander Qassem Soleimani and Popular Mobilization Forces leader Abu Mahdi Al Muhandis in Kut city last week (Rudaw, 8 January 2022). Asaib Ahl Al Haq fighters used live ammunition to disperse the riot and injured two. The erection of the memorial coincided with the anniversary week of the US drone strike that killed Soleimani and Muhandis on 3 January 2020. Between 9 and 13 January, anti-US militants also conducted 12 roadside IED attacks targeting Global Coalition convoys including in Baghdad, Babil, and Al Muthanna provinces. These attacks are a continuation of heightened militant activity, which began in the first week of January to mark the anniversary of the assassination. These attacks in Baghdad, in addition to clashes between Iraqi Security Forces and Islamic State (IS) militants, contributed to a 278% spike in violence last week in Baghdad relative to the past month (see ACLED’s Early Warning Research Hub for more).

Last week in Turkey, there was an increase in mob violence targeting migrants. In Ankara, an Afghan family was attacked by unidentified means, leading to injuries. Meanwhile, in Esenyurt, Istanbul, around 30 people attacked the shop of a Syrian migrant family following a dispute between Syrian and Turkish groups in the area by rock throwing, though reportedly causing only material damages. Also in Istanbul, a 19-year-old Syrian refugee was killed when unidentified assailants from the neighborhood broke into the house where he lived, assaulted residents, and stabbed him in the chest. Eight people have been detained in relation to the attack, including three Afghan nationals (Al Jazeera, 12 January 2022). Refugees in Turkey have been increasingly targeted by hate crimes, as locals hold them responsible for the country’s economic crisis (France 24, 12 January 2022).

In Iran, teachers continued to protest last week over the government’s failure to implement a salary ranking plan that would raise their wages. Protesters were dispersed and arrested by police forces in at least three locations. Teachers reject a government proposal to increase their salaries last month, as the increase only amounted to approximately 11 USD, in contrast to the 700 to 1,600 USD they demand (Iran International, 16 December 2021). Similarly, judiciary employees launched nationwide protests last week over low wages and the government’s rejection of a contract extension plan.

In Palestine, an 80-year-old man died of a heart attack after being detained, handcuffed, and beaten by Israeli soldiers in Jiljiliya village last week during a raid on the village. It is unclear why he was detained. The man was a dual US citizen and the US State Department has since requested clarification on the incident from Israel (Haaretz, 12 January 2022). Also, an unidentified Palestinian carried out a car-ramming attack against Israeli soldiers near the Halamish settlement in the West Bank, wounding a soldier and leading to his arrest.

Lastly in Lebanon, labor and transportation unions led nationwide demonstrations that erupted against worsening living and economic conditions, and the record depreciation of the national currency against the US dollar. Drivers and transport sector workers blocked several major highways demanding the government reinstate subsidies on fuel and other products (Peoples Dispatch, 14 January 2022). Demonstrations erupted after the Lebanese pound fell to a record low of 33,000 LBP to 1 US dollar last week (Naharnet, 17 January 2022).