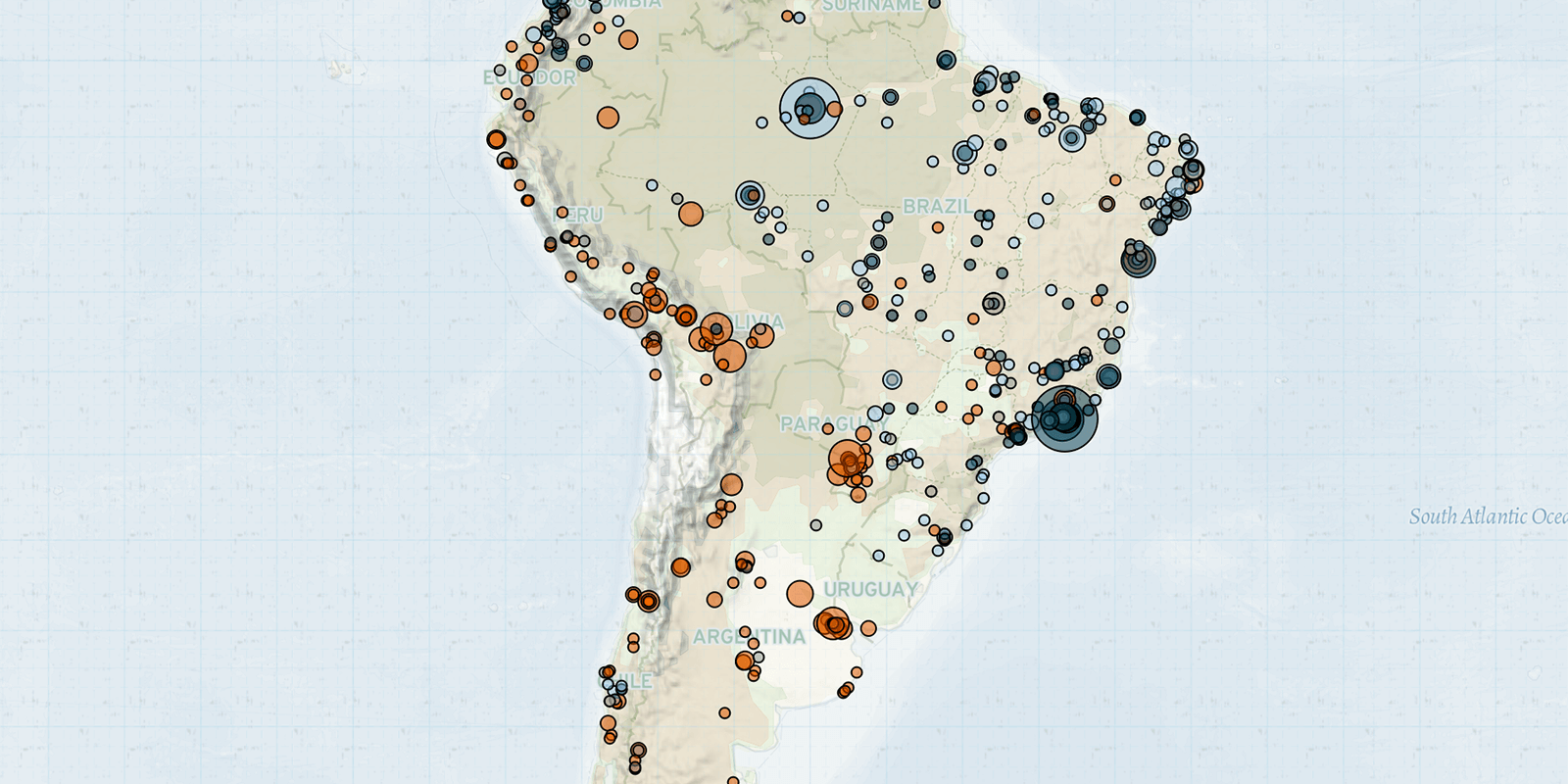 Last week in South America, violence remained at similar levels compared to the week prior, while demonstrations increased by over a quarter. In Brazil, military forces and civil police occupied two favelas in Rio de Janeiro in a major operation to regain territorial control from drug trafficking and militia groups. In Venezuela, tensions on the border with Colombia increased as the National Liberation Army (ELN) launched several operations in Apure state. In Colombia, violent attacks against civilians continue to take place. Furthermore, clashes between armed groups took place in Valle del Cauca department and a car bomb detonated outside government offices in Arauca department. In Chile, four forestry and agricultural workers were killed by unknown perpetrators in the Araucanía and Biobío regions one day after the senate extended the state of emergency in Chile’s southern regions (Biobio, 22 January 2022).

In Brazil, on 19 January, 1,200 military and civil police personnel occupied Rio de Janeiro’s Jacarezinho community and its surroundings in a major operation launched to regain control of the region from the Red Command (CV) (Folha de S. Paulo, 19 January 2022). As part of the same operation, military and civil police also occupied the Muzema community, currently under de facto territorial control of a police militia group (UOL, 19 January 2022). The governor of Rio de Janeiro ordered the occupation as part of a program called ‘Integrated City,’ aiming to renew efforts to crack down on organized crime groups (Folha de S. Paulo, 19 January 2022). On 21 January, only two days after the military occupation, a shoot-out between military police and the CV was registered in the area. Casualties from the clash remain unknown. Jacarezinho has previously been the site of prominent deadly violence involving state forces. In May 2021, a police raid of the favela resulted in 29 deaths, the most lethal operation in Rio’s history, drawing sharp criticism from human rights groups (Folha de S. Paulo, 7 May 2021).

In Colombia, the Gulf Clan and the ELN clashed for three consecutive days last week in Buenaventura municipality, Valle del Cauca department. Due to curfews and movement restrictions imposed by armed groups, Afro-Colombian communities and Indigenous groups who inhabit the region have been caught in the crossfire. These trends contributed to the 180% increase in violence in Valle del Cauca last week relative to the past month that is flagged by ACLED’s Subnational Surge Tracker, which first warned of a surge in violence in the department earlier this month. Violence in Valle del Cauca is both common and highly volatile; it is considered an area of ‘extreme risk’ by ACLED’s Volatility and Risk Predictability Index.

Elsewhere, clashes between the 33rd FARC dissident front and state forces were reported in Hacari and Tibu municipalities in the Norte de Santander department, with no fatalities reported. The group has a significant presence in the department, often clashing with security forces in an attempt to control drug trafficking routes. In Ocaña municipality, unidentified armed men shot and killed three members of the same family; all of the victims had noted increased violence in the area due to clashes between armed groups and military forces. Violence in Norte de Santander has been common though not volatile; however, last week it became more volatile, resulting in a shift from a place of ‘consistent risk’ to being considered an area of ‘extreme risk’ by ACLED’s Volatility and Risk Predictability Index.

Furthermore, on 19 January, a car bomb detonated in the urban area of Saravena municipality, in Arauca, near the Venezuelan border. One person was killed, and 20 others were injured in the attack. The explosion damaged several buildings, including government offices and the headquarters of a human rights organization. The region is the site of an ongoing conflict between the ELN and dissidents of the Revolutionary Armed Forces of Colombia (FARC) over the control of illicit economies along the Venezuelan border (Colombia Reports, 5 January 2022). In footage released by the press, FARC dissidents of the 28th Front claimed responsibility for the attack, expressing it was a critical strike against ELN urban structures operating in the area (El Universal, 21 January 2022). A few days before the attack, the 28th Front’s leader recorded a message threatening to attack different social organizations in Saravena (El Colombiano, 20 January 2022). These trends contribute to the 300% increase in violence in Arauca last week relative to the past month that is flagged by ACLED’s Subnational Surge Tracker. Moreover, with presidential and regional elections scheduled for 13 March, the number of attacks against civilians remains high, with at least 20 attacks and 36 fatalities reported last week across Colombia. These trends contributed to the 59% increase in violence in Colombia last week relative to the past month that is flagged by ACLED’s Conflict Change Map, which warned of a surge in violence in the country earlier this month.

Meanwhile, in Venezuela, tensions in the border state of Apure continued to intensify last week due to an offensive launched by the ELN. Approximately 300 ELN fighters, reportedly equipped with Russian military technology, including drones, have advanced across the state, seizing control of multiple farms and small villages (Diario El Tiempo, 16 January 2022). Among the group’s targets was La Gabarra border village, where 50 militants seized control of a town traditionally controlled by the pro-government guerrilla group Patriotic Forces of National Liberation (FPLN) (El Pitazo, 18 January 2022). Another target was the nearby Puerto Paez locality, where ELN attacks have led to the forced displacement of at least 110 civilians to the bordering Vichada department in Colombia (El Carabobeno, 17 January 2022; Periodico del Delta, 13 January 2022). In response to these developments, the Venezuelan military deployed more than 700 additional troops to Paez municipality in an attempt to halt the group’s advance (El Carabobeno, 17 January 2022). ACLED’s Conflict Change Map warned of a surge in violence in Venezuela earlier this month

Finally, in Chile, four forestry and agricultural workers were ambushed and killed in the Araucanía and Biobío regions last week. Although the perpetrators remain unknown, Indigenous Mapuche militias have launched numerous attacks on forestry companies in these regions. For decades, the Mapuche people have claimed that their territory has been illegally requisitioned by agriculture and forestry companies acting with state complicity (Reuters, 10 July 2021) (for more, see this ACLED Analysis piece: Understanding Indigenous Conflict in Chile). These trends contributed to the 380% increase in violence in Chile last week relative to the past month that is flagged by ACLED’s Conflict Change Map. Amid the violence, on 19 January, the senate extended the ongoing state of emergency in four southern regions for another 15 days (Biobio, 22 January 2022). The state of emergency covers Biobío and Arauco provinces in the Biobío region, as well as Cautín and Malleco in the Araucanía region. These provinces have been in a state of emergency over the Mapuche conflict since September 2021; the state of emergency allows the deployment of military forces to patrol areas with high Indigenous militia activity (Biobio Chile, 1 October 2021).