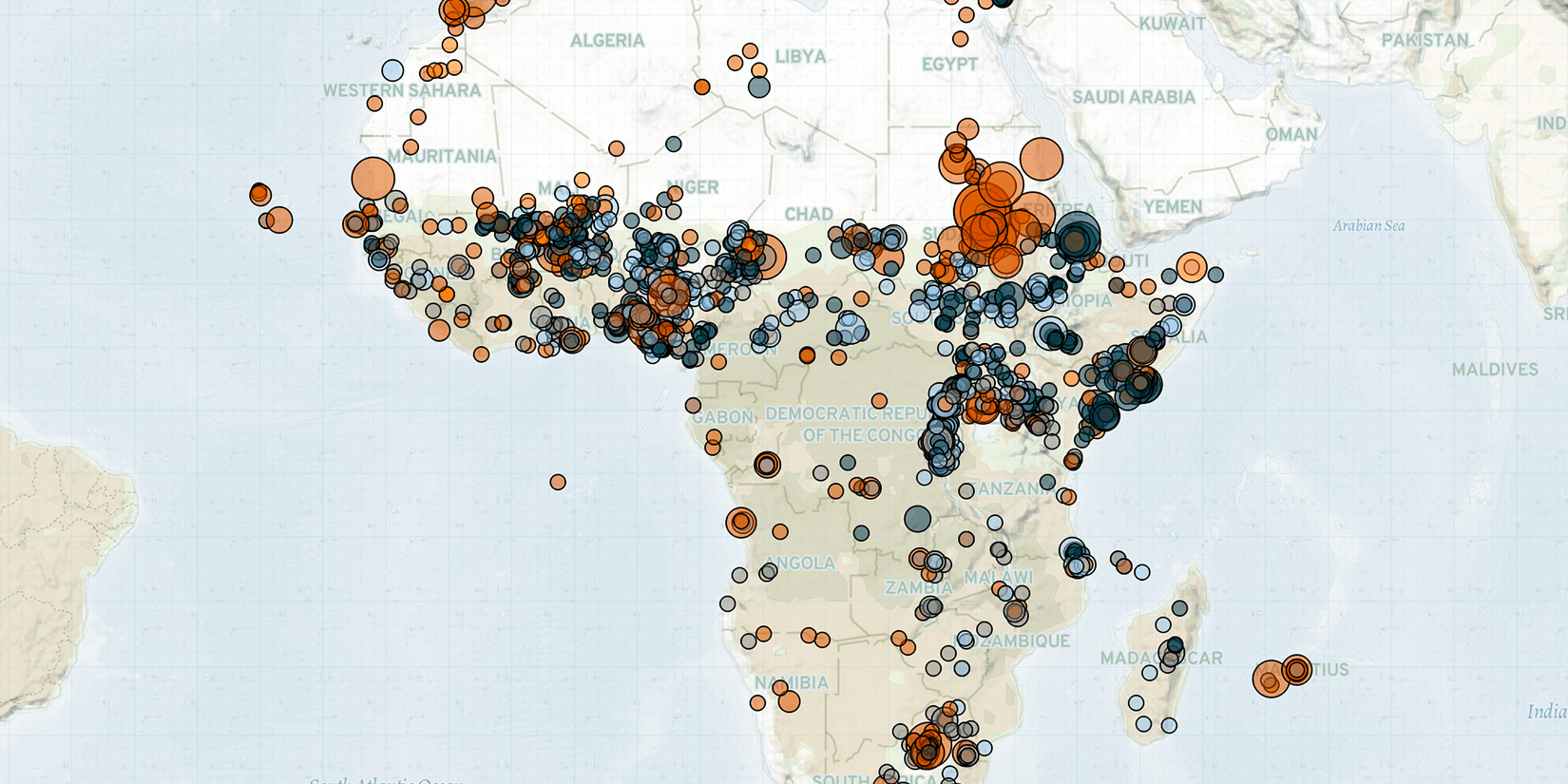 In Burkina Faso, French Operation Barkhane forces increased operations in the Nord and Est regions, killing scores of presumed JNIM militants including some affiliated with Ansaroul Islam. Airstrikes against Islamist militants included bombardments by French forces between the departments of Tansarga and Diapaga, while Burkinabe forces carried out airstrikes around Ouendoupoli and Niynfoagma, respectively in the Nord and Est region. Burkinabe soldiers liberated about ten civilians taken hostage by JNIM militants in Tankoualou. Ongoing violence from suspected Islamic State West Africa Province (ISWAP) Greater Sahara faction militants continued with attacks on civilians and Volunteers for the Defense of the Homeland (VDP) in the Sahel and Center-North region. Meanwhile, JNIM pursued its campaign of targeting education and telecommunications infrastructure in East, Center-East, Boucle du Mouhoun, and Southwest regions. ​​

In Mali, French-led Takuba and military forces conducted a joint operation between Menaka and Gao regions, which resulted in at least 25 fatalities among Islamist militants. JNIM launched a major offensive against ISWAP Greater Sahara militants in the Gourma region, which killed over a dozen ISWAP militants and left several JNIM militants wounded. In the area of Tedjerit of Menaka region, French aerial bombings destroyed military equipment belonging to Movement for Azawad Salvation Chamanamas faction (MSA-C).

In Libya, unknown gunmen attacked the vehicle of the country’s interim Prime Minister, Abdul Hamid Al Dbeidah, in Tripoli. The incident took place hours before the parliament was due to convene for the election of a new prime minister.

In Nigeria, the military operations against gunmen in the northwestern states shifted after the courts declared these militant groups as “terrorists” (Guardian Nigeria, 5 January 2022). Military forces used joint ground operations and airstrikes, leaving scores of fatalities in Kaduna state among local militants and others fleeing from Niger state. Attacks on civilians in Niger state increased last week following increased violence from suspected ISWAP or Boko Haram fighters, recording the most political disorder in the country and scores of fatalities including children. ACLED’s Subnational Threat Tracker flagged a 246% increase in violence in Niger state last month relative to the past year. The Subnational Tracker first warned of increased violence to come in Niger in the past month.

In the Democratic Republic of Congo, military operations against the Allied Democratic Forces (ADF) continued in the provinces of Ituri and North Kivu. Last week, the Congolese army (FARDC) and UN peacekeepers (MONUSCO) killed more than a dozen ADF rebels near Mangina town, located at the border of these two provinces. In parallel, the Ugandan armed forces (UPDF) moved into ADF-dominated areas in Ituri province while they fired missiles and bombs against the rebels in the territory of Irumu. In Rutshuru territory of North Kivu, presumed elements of the Alliance of Congolese Resistance Forces (AFRC) exchanged fire against the Democratic Forces for the Liberation of Rwanda (FDLR). Local sources report the clashes erupted following the incursion of the AFRC in the locality of Nyamitwitwi in early February. Elsewhere, in South Kivu, several elements of the Ngumino and Twirwaneho were killed during clashes as the FARDC regained territory in the Tanganyika sector of Fizi.

In neighboring Burundi, military forces killed at least 20 soldiers who refused to cross the border into the DRC to combat the Resistance to the Rule of Law in Burundi (RED-Tabara). Since December 2021, Burundian soldiers have been deployed in the province of South Kivu to fight the group, culminating in a string of deadly clashes throughout the month of January.

In South Sudan, the security situation deteriorated over the past week in the wake of a peace agreement reached in mid-January between the government and the Kitgweng faction of the Sudan’s People Liberation Movement-In Opposition (SPLM-IO). In the north-east of the country, SPLM-IO loyalists clashed against IO Kitgweng as well as government-aligned forces in Nasir and Longochuk counties of Upper Nile state. While violence in Upper Nile has not been common, it has become increasingly volatile, resulting in a shift from a place of ‘low risk’ to being considered an area of ‘growing risk’ by ACLED’s Volatility and Risk Predictability Index. Fighting was also reported in Koch county in Unity state, with some accounts describing the clashes between government forces (with allied militia) and IO loyalists, and others between IO loyalists and IO Kitgweng.

In Sudan, amid continuing anti-coup demonstrations across the country, violence escalated in North Darfur state where several deadly attacks were reported by the militia targeting civilians. Moreover, unknown gunmen attacked joint security forces at the UN headquarters in El Fasher, killing four people. Clashes between “Arab-identifying” militias and Fur militia over stolen cattle were also reported in the state. As flagged by ACLED’s Volatility and Risk Predictability Index, North Darfur has become increasingly volatile, resulting in a shift from a place of ‘consistent risk’ to being considered an area of ‘extreme risk.’

In Somalia, an Al Shabaab militant detonated a suicide vest targeting Somaliland election delegates near the presidential palace in Mogadishu, killing at least six people and injuring more than a dozen. The incident comes amid a string of election-related attacks since the beginning of the year. In the meantime, attacks by Al Shabaab militants on government security forces, Jubaland security forces and the African Union Mission in Somalia (AMISOM) forces continued in southern Somalia, with government forces overtaking two villages in Lower Shabelle.