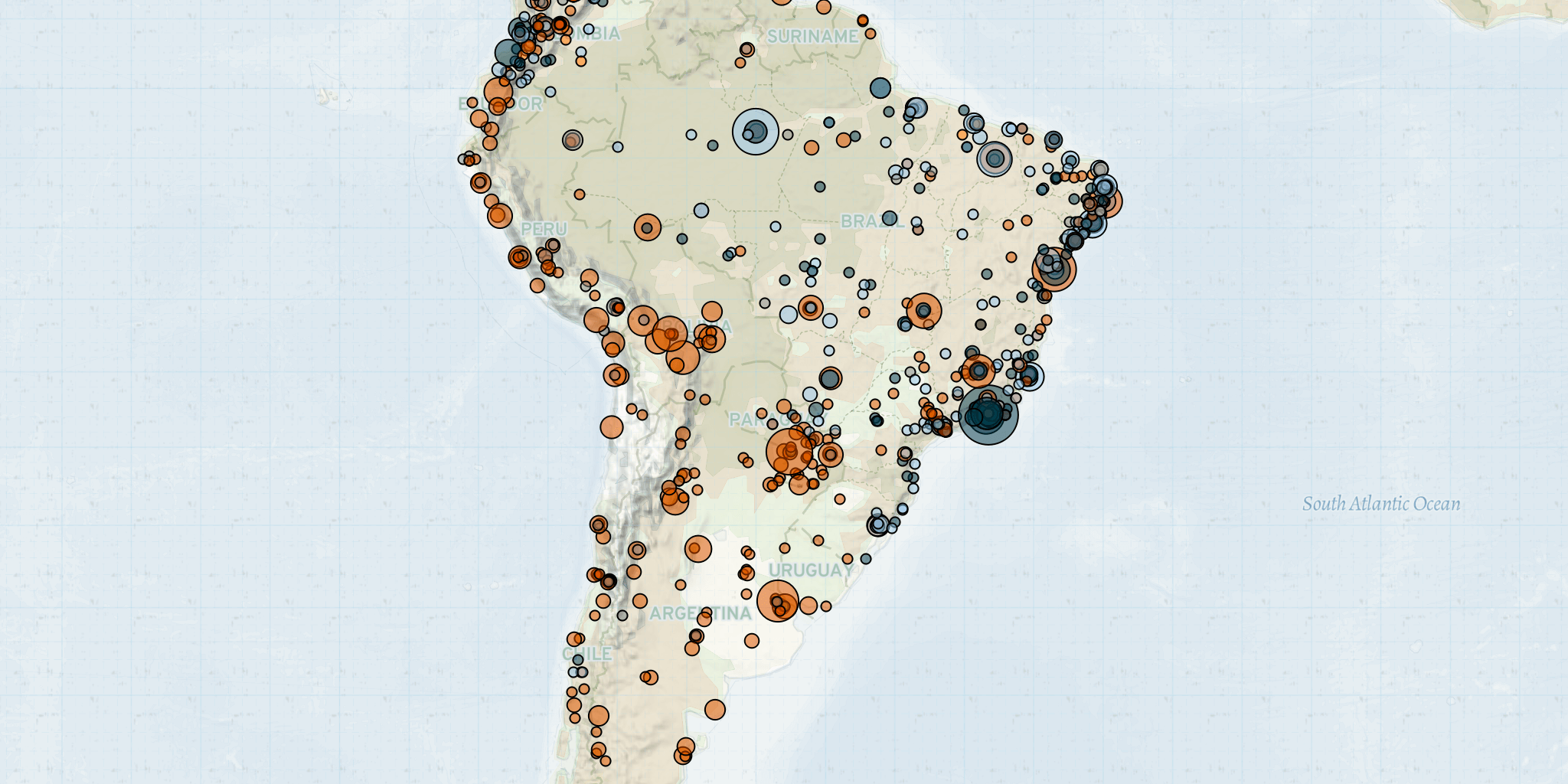 Last week in South America, both violence and demonstrations decreased across the region compared to the week prior. In Colombia, electoral-related violence continued in Norte de Santander department, with unidentified gunmen killing a local campaign coordinator. Meanwhile, clashes between state forces and guerrilla groups were reported in Norte de Santander and La Guajira departments, while rebel groups continued to fight among themselves in Cauca department. In Brazil, violence continued unabated in Bahia state, with several fatalities reported. At the same time, violence increased in Goiás state as drug trafficking groups fought against state forces. Finally, demonstrations against the Russian invasion of Ukraine and in solidarity with Ukraine were reported across multiple countries in the region.

In Colombia, the number of violent events decreased by over half last week compared to the week prior. Nevertheless, electoral violence and ongoing turf wars continued, contributing to the 28% increase in violence in the country over the past month relative to the past year flagged by ACLED’s Conflict Change Map; the tool first warned of increased violence to come in the country last month.

Electoral-related violence continued ahead of regional elections scheduled for 13 March and presidential elections on 29 May, most notably in Norte de Santander department. In Convención municipality, unidentified armed individuals shot a member of the Democratic Center political party (Centro Democrático, in Spanish) dead. The victim, a local campaign coordinator, had previously requested a government security detail in response to earlier death threats (Infobae, 4 March 2022). Elsewhere in Norte de Santander, military forces clashed with members of the National Liberation Army (ELN) in the rural area of Tibú municipality during a successful army operation to capture the head of ELN finances (La Opinion, 28 January 2022). These recent reports of violence contribute to the 121% increase in violence in Norte de Santander last month relative to the past year flagged by ACLED’s Subnational Threat Tracker, which first warned of increased violence to come in the department last month. Violence in Norte de Santander has become increasingly volatile, resulting in a shift to it being considered an area of ‘extreme risk’ by ACLED’s Volatility and Risk Predictability Index.

Meanwhile, in Cauca department, dissidents of the Revolutionary Armed Forces of Colombia (FARC) continued to clash with the ELN last week, with fighting recorded throughout the week in Guapi municipality. While no casualties have been reported thus far, civilians have hung white flags on their windows to call for a ceasefire as they are forced to stay confined indoors to avoid being caught in the crossfire (El Espectador, 28 February 2022).

In La Guajira department, unidentified armed men shot and killed three Wayuu Indigenous people in a drive-by shooting in Maicao municipality. Three days later, police forces and Gulf Clan members clashed in the same city, resulting in the deaths of two Gulf Clan members. While violence in La Guajira has not been common, it has become increasingly volatile, resulting in a shift from a place of ‘low risk’ to being considered an area of ‘growing risk’ by ACLED’s Volatility and Risk Predictability Index.

In Brazil, violence continued at similar levels last week compared to the week prior. In Salvador city, Bahia state, military police and drug traffickers engaged in an armed clash in São Marcos neighborhood, resulting in the deaths of three suspects. A day later, another military police intervention led to the killing of three other suspected drug traffickers in the Gamboa community. While state forces claim the victims were drug traffickers, residents have claimed the victims were not involved in criminal activities (UOL, 1 March 2022). Following the operation in Gamboa, residents blocked the streets with rubble and waste to demonstrate against the killings. Another sixteen fatalities were reported in Bahia state last week, stemming from targeted attacks against civilians and armed clashes between drug trafficking groups and state forces.

Elsewhere in Brazil, three members of a drug trafficking group exchanged fire with military police forces last week in Goiânia city, Goiás state. All three drug traffickers were killed. The military police operation was launched after the same group killed a civilian in Albino Boaventura sector. Two other fatalities were reported in the state last week, stemming from a targeted attack against civilians. Violence in Goiás has become increasingly volatile, resulting in it being considered an area of ‘growing risk’ by ACLED’s Volatility and Risk Predictability Index. Located in the center of Brazil, Goiás serves as an important drug trafficking route as it borders five Brazilian states and the Federal District, allowing for the distribution of drugs coming from Bolivia and Paraguay (Jornal Opção,14 April 2019). Currently, the First Capital Command (PCC) is the dominant organized crime group in the state.

Finally, in Venezuela, protesters took to the streets across the country on 27 February in protest against the Russian invasion of Ukraine and in solidarity with Ukrainian citizens. The protests were called by several opposition political parties, including Citizens’ Meeting (Encuentro Ciudadano, in Spanish), Popular Will (Voluntad Popular), and Justice First (Primero Justicia). Protests were reported in Apure, Barinas, Cojedes, Delta Amacuro, Lara, Monagas, and Yaracuy states. In Caracas city, they gathered outside the Russian Embassy and decried what they described as “Russian war crimes” and denounced the government of Nicolás Maduro for supporting the invasion (El Carabobeno, 27 February 2022; La Patilla, 27 February 2022). On 3 March, protesters also gathered outside the office of the European Union delegation in Caracas, led by self-declared interim President Juan Guaidó and other opposition figures. Maduro’s ongoing support for Russian President Vladimir Putin has further inflamed existing anti-Maduro opposition (France24, 1 March 2022; France24, 3 March 2022). Protests against the Russian invasion of Ukraine were also reported in Brazil, Bolivia, Colombia, Paraguay, Peru, and Uruguay.