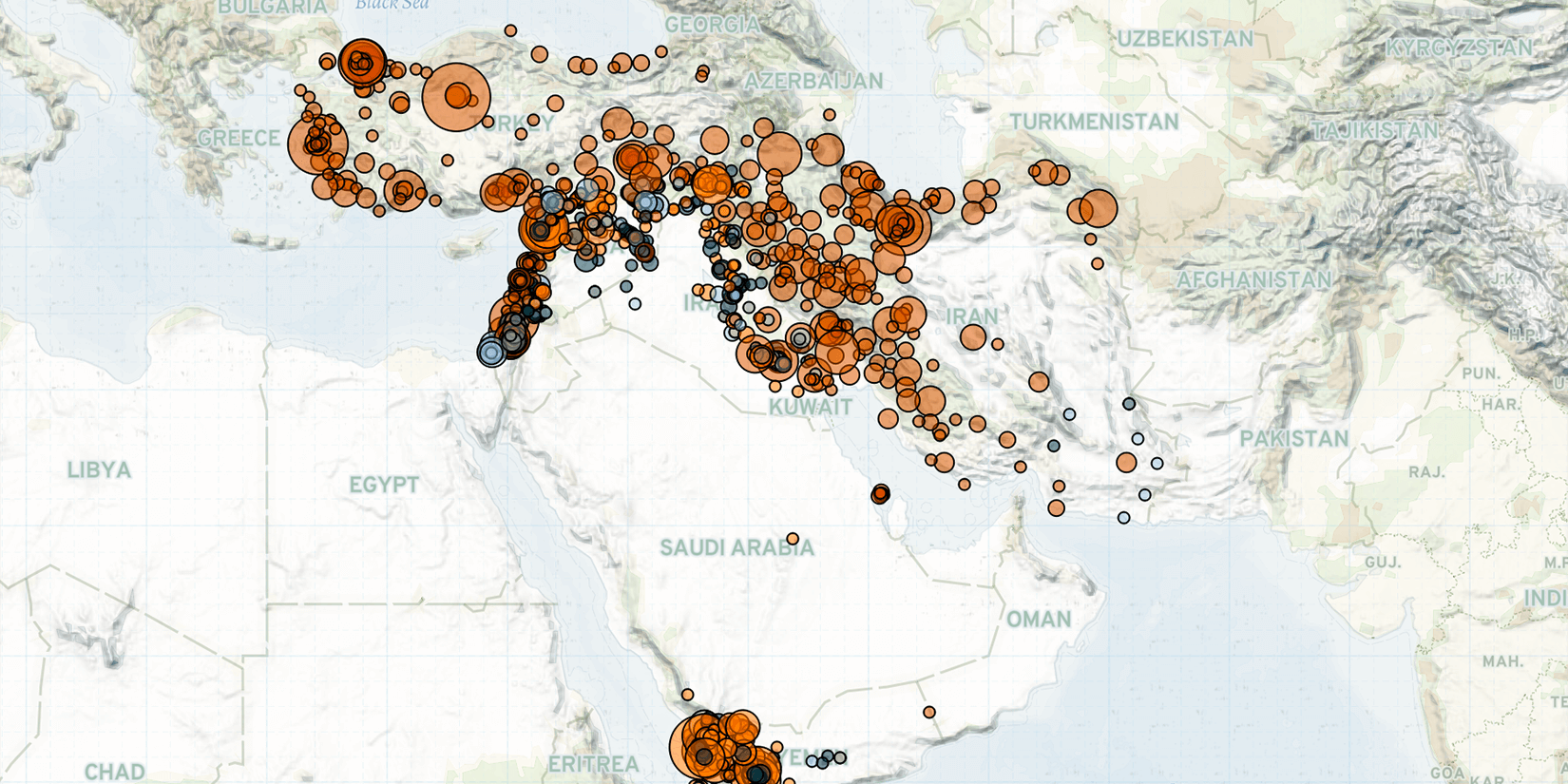 Last week in the Middle East, political violence remained at relatively stable levels in Yemen, although it was characterized by a significant increase in confrontations between Houthi and pro-Hadi forces. In Syria, violence against civilians significantly increased throughout the country. In Iraq, Iranian forces targeted the American consulate in Erbil city with ballistic missiles in retaliation for an Israeli airstrike on Islamic Revolutionary Guard Corps (IRGC) positions in Syria. In Palestine, Israeli forces killed two Palestinians during raids in refugee camps in the West Bank and East Jerusalem. In Israel, an allegedly armed Bedouin was killed during a clash with Israeli border police. In Turkey, Kurdish militants attacked and injured Turkish police officers in Hakkari and Diyarbakir provinces.

In Yemen, Houthi forces made territorial gains against pro-Hadi forces in Abs, Haradh, and Midi districts last week amid renewed offensives in the Hajjah governorate, claiming to have killed at least 80 Sudanese and 15 Saudi soldiers (Ansar Allah, 14 March 2022; Ansar Allah, 16 March 2022). These are the first recorded clashes between Houthi and pro-Hadi forces in Midi district since June 2019. Last week’s offensives contributed to the 478% increase in violence in Hajjah governorate over the past month relative to the past year that is flagged by ACLED’s Subnational Threat Tracker. The Tracker first warned of increased violence to come in Hajjah in the past month amid a failed pro-Hadi offensive in February. Clashes between Houthi and pro-Hadi forces also picked up in Marib governorate last week, concentrated around the Balaq mountain range. Houthi forces claim to have advanced towards the strategic Falaj checkpoint, which represents the southern gateway to Marib city (YNP, 12 March 2022).

Elsewhere in Yemen, Houthi forces claim to have advanced against pro-Hadi and Saudi forces in the Yemen-Saudi border region last week, in the direction of Ar Raboah city and the Ad Dair region in Saudi Arabia (Yemen Press Agency, 15 Mars 2022). Also in the north of the country, Houthi forces reportedly deployed drones, ballistic missiles, and launch pads in Al Jawf governorate throughout last week (Yemen Window, 18 March 2022). This could indicate that Houthi forces are preparing to launch new attacks on Saudi Arabia after a hiatus last week.

In Abyan governorate, the convoy of a senior military leader in the secessionist Southern Transitional Council (STC) came under attack last week, in an event that was later claimed by Al Qaeda in the Arabian Peninsula (AQAP) (Twitter @Dr_E_Kendall, 21 March 2022). This is the first AQAP attack against STC-affiliated forces since the kidnapping of a Shabwani Elite fighter in June 2021.

In Iraq, Turkish airstrikes slightly decreased last week, with notable decreases in Barwari Bala and Amadiya districts in Duhok province. However, airstrike activity increased significantly in Nerwa Rekan district in Duhok. Violence in Duhok is common and highly volatile; ACLED’s Volatility and Predictability Index considers it an area of ‘extreme risk.’ Turkey also resumed airstrikes in Erbil province last week after a pause the week prior.

In Palestine, Israeli security forces killed two Palestinians during clashes with local residents last week as they raided Palestinian refugee camps in the West Bank and East Jerusalem. Israeli border police clashed with Palestinians during a raid into the Balata refugee camp east of Nablus, killing one Palestinian teenager and shooting and injuring three others. In East Jerusalem, Palestinian residents of the the Qalandia refugee camp clashed with Israeli forces after they raided their camp. Israeli forces shot and killed one Palestinian and injured six others with live bullets during the clashes. ACLED’s Conflict Change Map first warned of increased violence to come in Palestine in the past month.

In Israel, Israeli police forces clashed with armed Bedouins in the Israeli Bedouin town of Rahat last week. Undercover forces from the border police and Shin Bet — Israel’s internal intelligence agency — exchanged fire with three armed Bedouins during an operation in Rahat. One of the Bedouins was killed and the other two escaped. The police’s internal affairs department opened an investigation into the shooting after evidence contradicting the official narrative on the incident emerged, suggesting the possibility that the Bedouin was shot in the back (Haaretz, 17 March 2022).