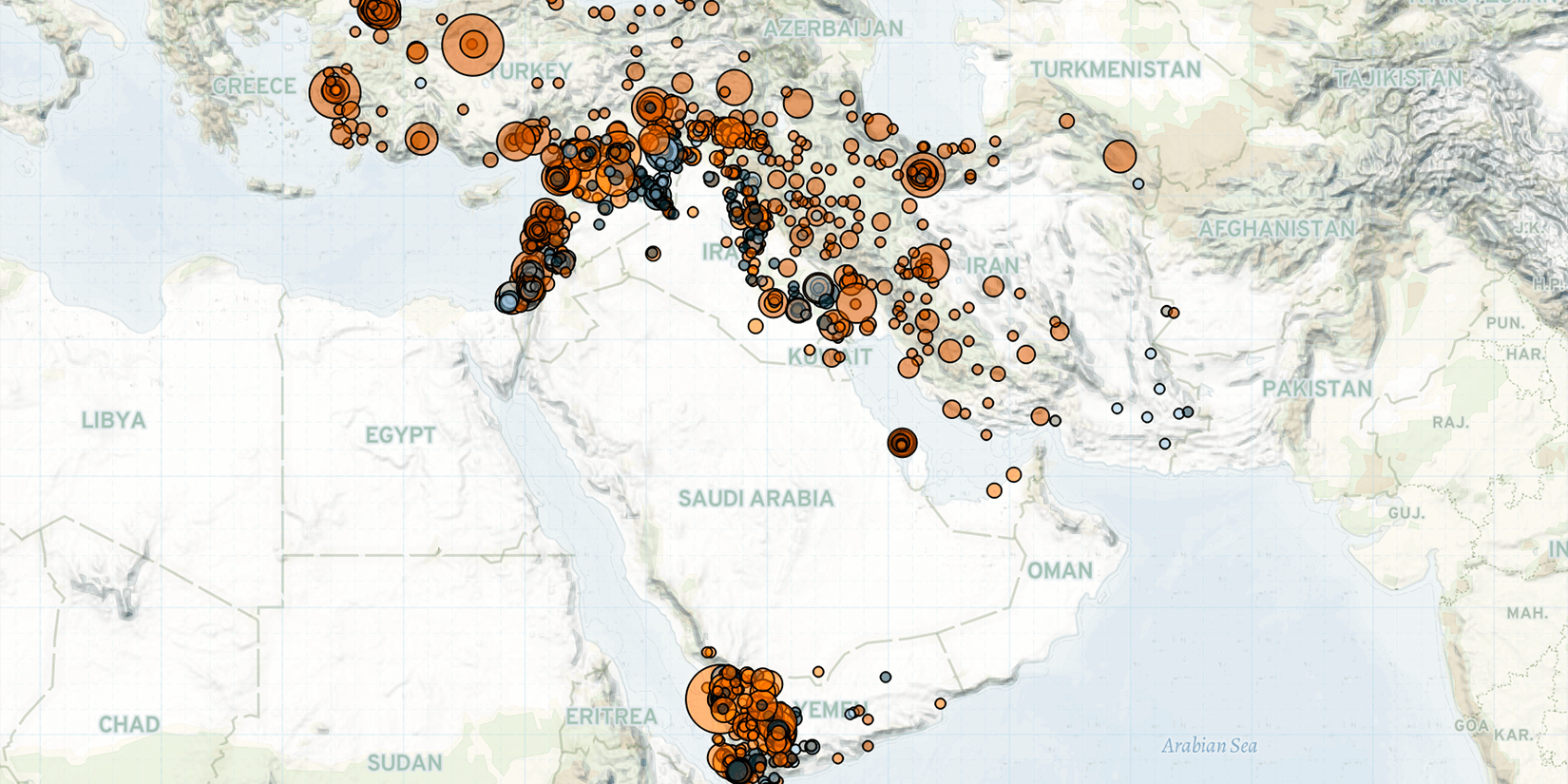 Last week in the Middle East, no Houthi attacks were reported in either Saudi Arabia or the United Arab Emirates (UAE) for the first time in months. In Yemen, overall levels of political violence decreased significantly, despite remaining high in Hajjah governorate. In Syria, Israeli forces conducted a missile strike against Iranian forces, as reported fatalities from explosives and war remnants spiked. In Iraq, violence in Maysan province decreased last week after two weeks of escalation. In Palestine, Israeli settlers and police clashed with Palestinian demonstrators in East Jerusalem, while two Palestinians were killed in clashes with Israeli forces elsewhere in the West Bank. Meanwhile, Israeli forces shot down Hezbollah- and Hamas-operated surveillance drones as they entered Israeli airspace, while another drone managed to fly over Israel undisturbed.

In Yemen, political violence in Marib governorate decreased last week for the fourth consecutive week, reaching its lowest levels since September 2021, as clashes between Houthi and pro-Hadi forces continue to subside. Contrastingly, clashes between local tribesmen and pro-Hadi forces erupted in the Marib valley and around the Safer oil fields, resulting in the deaths of several tribesmen and the potential for further escalation.

In Hajjah governorate, political violence remained at high levels last week, as Houthi forces broke a siege that pro-Hadi forces had imposed on Harad city the week prior, and regained control of recently lost territory. By the end of last week, clashes between Houthi and pro-Hadi forces had also erupted along fronts in Abs district. The reignition of these fronts in recent weeks has led to a 702% in violence in Hajjah governorate in the last month relative to the past year, flagged by ACLED’s Subnational Surge Tracker.

Meanwhile, Saudi-led coalition airstrikes on and around Sanaa city continued last week, including on the Houthi-run telecommunications ministry, which the coalition accuses of being used to conduct drone attacks (Reuters, 14 February 2021). Despite a decrease in such attacks last week compared to previous weeks, these continued airstrikes contribute to increases in violence of 156% and 497% in Amanat al Asimah and Sanaa governorates, respectively, last month relative to the past year, flagged by ACLED’s Subnational Threat Tracker. The Subnational Tracker first warned of increased violence to come in the governorates Hajjah, Amanat al Asimah, and Sanaa in the past month.

Elsewhere in Yemen, a convoy of trucks suspected to be carrying weapons to pro-Hadi forces was attacked by unidentified gunmen twice last week, while on its way from Al Mahrah governorate to Marib governorate. These attacks, which come after a previous attack on the convoy the week prior, lead some observers to suggest that this shipment might be carrying weapons that could tilt the balance of power in favor of pro-Hadi forces in Marib (Twitter @NickJBrumfield, 17 February 2022).

Meanwhile, As Sweida province experienced a significant decrease in violent demonstrations last week. The decrease comes as demonstrators denouncing the deterioration of basic services within the Druze-majority areas agreed to indirectly negotiate with the Syrian regime through religious intermediaries (Syrian Observer, 18 February 2022). Violent or destructive demonstrations had contributed to a 235% increase in violence in As Sweida over the past month relative to the past year, flagged by ACLED’s Subnational Surge Tracker.

In northern Syria, Turkish forces and opposition groups continued to shell areas surrounding the Operation Peace Spring area last week at a similar pace to the week prior, but shifted their focus from Al Hasakeh province to Ar Raqqa province. Meanwhile, Turkish airstrikes in northern Iraq increased and changed their focus from Ninewa and Erbil provinces to Duhok province. This shift in focus contributes to the 122% increase in violence in Duhok over the past week relative to the past month, as flagged by ACLED’s Subnational Surge Tracker. Violence in Duhok is both common and highly volatile; it is considered an area of ‘extreme risk’ by ACLED’s Volatility and Risk Predictability Index.

In Iraq, violence almost halved last week, as IED attacks, targeted killings, and armed clashes all decreased. Maysan province also experienced a decrease in violence after a month of escalations. While violence in Maysan has not been common, it has become increasingly volatile, and is now considered an area of ‘growing risk’ by ACLED’s Volatility and Risk Predictability Index – a result of tribal violence and political assassinations. The decrease last week took place after the Iraqi army and police tightened security measures in Maysan province to combat the increasing tribal violence.

Last week in Palestine, clashes erupted involving Palestinian residents, Israeli settlers, and police in East Jerusalem and the West Bank. In East Jerusalem, settlers and a far-right Likud Knesset member set up a makeshift office, on a plot of land belonging to an evicted Palestinian family in Sheikh Jarrah, to protest the torching of a settler home in the area. In response, Palestinian residents and their supporters demonstrated against the settlers and clashed with the Israeli police, resulting in injuries to dozens of Palestinians. The police imposed a curfew on the area and dismantled the makeshift office to reduce tensions (Times of Israel, 13 February 2022). Elsewhere, Israeli security forces clashed with Palestinian demonstrators and gunmen in Silat al Harithiyah, as they attempted to demolish the house of a Palestinian convicted of killing a settler last December. A 17-year-old Palestinian was killed during the clashes. Lastly, another Palestinian was killed during clashes between Israeli forces and Palestinian rioters that began after the rioters threw rocks at a military post at the entrance of An Nabi Salih. Violent events in East Jerusalem and the West Bank have driven the 33% increase in violence in Palestine over the past week relative to the past month that is flagged by ACLED’s Conflict Change Map.

In Israel, two Hezbollah and one Hamas-operated surveillance drones attempted to enter Israeli airspace last week. The Israeli military shot down the two drones as they crossed into Israeli borders, but the third — launched by Hezbollah from southern Lebanon — entered Israeli airspace and flew for 40 minutes before flying back inside Lebanon (Jerusalem Post, 19 February 2022). In response, Israeli jets entered Lebanese airspace to pursue the drone and flew as far as Beirut (Haaretz, 18 February 2022).