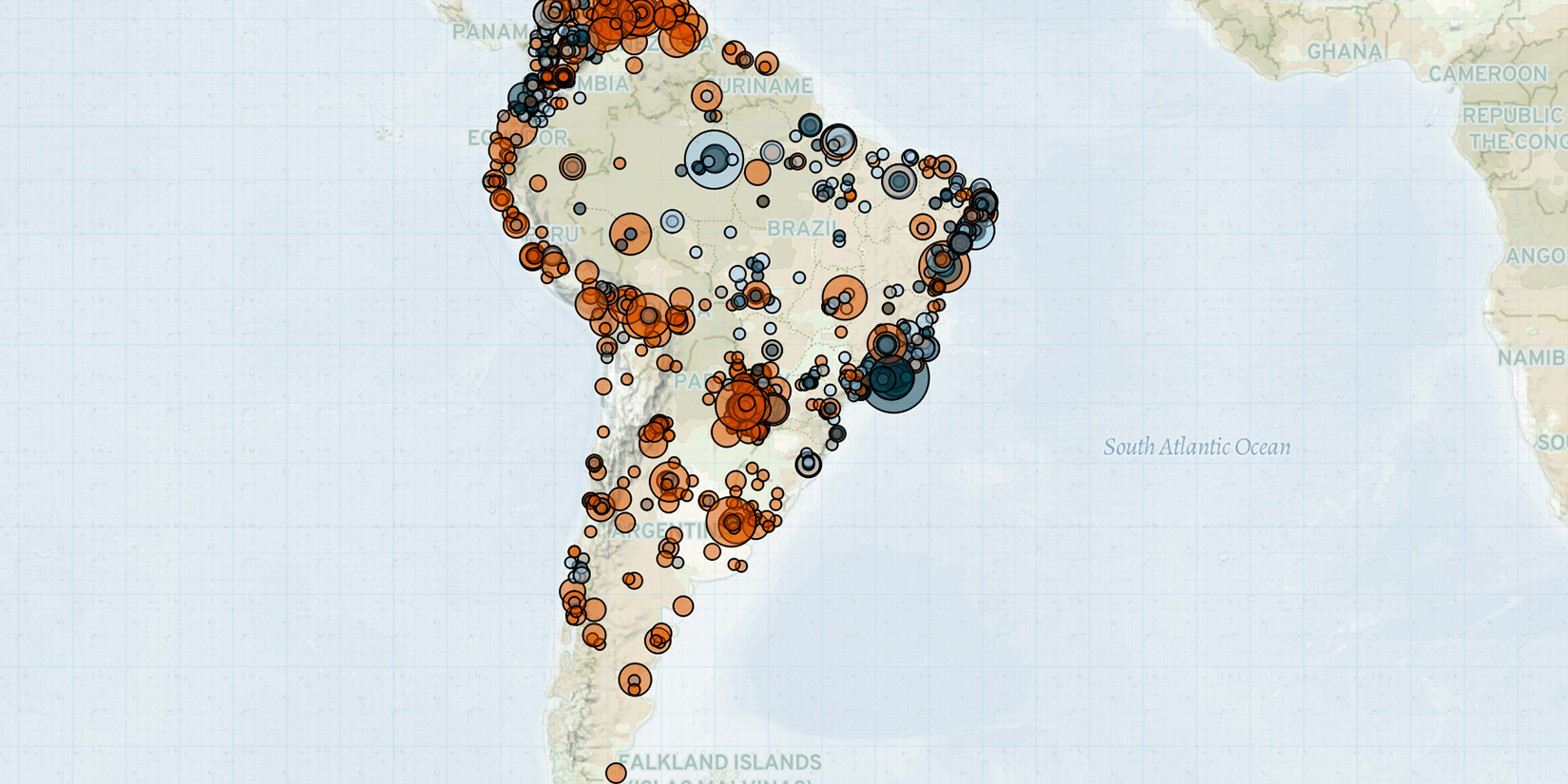 Last week in South America, violence remained at similar levels compared to the week prior, while demonstrations significantly increased, driven mainly by nationwide demonstrations against fuel price increases in Paraguay. In Argentina, protest levels also increased as civil society organizations led national rallies against what they saw as an insufficient increase of the minimum salary. Meanwhile, presidential primaries and legislative elections took place in Colombia amid continued violence. In Brazil, teachers took to the streets to demand a salary raise, while military police operations drove increased violence levels in Sergipe state. Finally, in Venezuela, anti-government protesters called for free and fair presidential elections.

In Paraguay, demonstrators took to the streets last week against a recent increase in fuel prices. Truck drivers led massive rallies and blocked several highways across the country with their trucks, claiming that the price increase was unsustainable for working Paraguayans (Ultima Hora, 14 March 2022). Over 95% of the protests were peaceful; however, in some localities, drivers set fire to tires and threw rocks at the windshields of cars attempting to break blockades. No police intervention was reported. On 18 March, some truck drivers’ unions suspended their blockades after the government promised a reduction in diesel prices and drafted a new bill to subsidize fuel tariffs (ABC Color, 18 March 2022). However, drivers claim they will continue to strike until a final agreement is signed (ABC Color, 18 March 2022).

In Argentina, members of the Polo Obrero and Barrios de Pie civil society organizations, among others, led nationwide protests last week against a recently-announced increase in the minimum living wage. Demonstrators rejected the government’s projected 40% annual increase in wages, which workers claim is insufficient to maintain a decent living standard (La Nación, 15 March 2022). Protesters also reinforced their rejection of the government’s agreement with the International Monetary Fund (IMF) (Clarín, 15 March 2022). Under the new deal, Argentina would progressively reduce its fiscal deficit from 3% in 2021 to just 0.9% in 2024 (La Nación, 10 March 2022). Protesters claim the deal will increase poverty and make working-class people bear the expenses of fiscal adjustments (La Nación, 10 March 2022). In Buenos Aires, the organizations started a camping site and sit-in protest in front of the Ministry of Social Development. There were no reports of violence or destruction, nor police intervention.

Meanwhile, violence continued in the southern regions of Chile amid ongoing Indigenous militia activities. On 15 March, unknown shooters attacked the convoy of newly-appointed Interior Minister Izkia Siches in the Mapuche community of Temucuicui, Araucanía region. While no casualties were reported, a pamphlet was later found at the attack site demanding the release of arrested Mapuche individuals (La Nación, 15 March 2022). In the Biobío region, members of the Mapuche armed organization Weichan Auka Mapu (WAM) set agricultural warehouses on fire in the Contulmo and Paicavi areas. ACLED’s Conflict Change Map first warned of increased violence to come in Chile in the past month.

Presidential primaries and legislative elections took place on 13 March in Colombia, with leftist Senator Gustavo Petro, from the Historic Pact political coalition, heading a significant advantage over other presidential candidates (El Pais, 14 March 2022). Petro secured the nomination for the Historic Pact with more than 80% of votes (Reuters, 13 March 2022). Petro is a former member of the 19th of April Movement, a guerrilla group that demobilized in the late 1980s (El Espectador, 12 October 2021). Controversy surrounded the legislative elections, as political parties reported irregularities during the vote count and independent observers claim to have identified confusion among voters due to flaws in the ballot design (Colombia Reports, 19 March 2022). In rural areas of Santa Marta, in Magdalena department, former paramilitary group Self-Defense Conquerors of Sierra Nevada — also called “Los Pachenca” — declared an ‘armed strike’ (paro armado, in Spanish) to prevent voters from reaching the polling stations (El Espectador, 13 March 2022). There were reports of roads being blocked with tree logs and hooded armed men intimidating civilians across rural roads.

Amid the elections, violence continued unabated in Antioquia department last week, with unidentified armed individuals holding 15 poll workers hostage in Murindo municipality. In Ituango municipality, military forces clashed with the 18th Dissident Front of the Revolutionary Armed Forces of Colombia (FARC), resulting in the deaths of one dissident and one soldier. A day later, military forces clashed with Gulf Clan members in the same area, resulting in the deaths of two soldiers. While violence in Antioquia has been common, it has become increasingly volatile, resulting in a shift from a place of ‘consistent risk’ to being considered an area of ‘extreme risk’ by ACLED’s Volatility and Risk Predictability Index. ACLED’s Subnational Surge Tracker first warned of increased violence to come in Antioquia in the past month.

In Brazil, teachers carried out nationwide demonstrations last week, demanding the implementation of a salary readjustment that was granted by the federal government. States and municipalities must approve the readjustment before it can be implemented, with many cities and states claiming that they lack the funds to accommodate the readjustment (CNN Brasil, 4 February 2022). In several cities, teachers also went on strike to push for the readjustment.

In Sergipe state, military police shot and killed a young man and tortured and injured another resident during an operation in Aracaju city last week. Soldiers claim that the man was killed in a shoot-out, a version denied by community members from the Homeless’ Workers Movement (MTST) (Brasil de Fato, 16 March 2022). Two other fatalities were also reported in the state last week, stemming from a clash between state forces and drug traffickers in Propriá municipality. At least 11 fatalities have been reported in Sergipe so far in March 2022, stemming from targeted attacks and clashes between drug traffickers and state forces. The recent trends contribute to the 235% increase in violence in Sergipe last month relative to the past year flagged by ACLED’s Subnational Surge Tracker. The Tracker first warned of increased violence to come in Sergipe in the past month.

Finally, in Venezuela, anti-government protests took place outside local National Election Council offices across the country on 17 March. The protests were organized by the Let’s Save Venezuela movement (Salvemos Venezuela, in Spanish) to demand free and fair presidential elections. The movement comprises a coalition of seven anti-Maduro opposition political parties, with the support of self-declared interim President Juan Guaidó (Efecto Cocuyo, 16 February 2022).