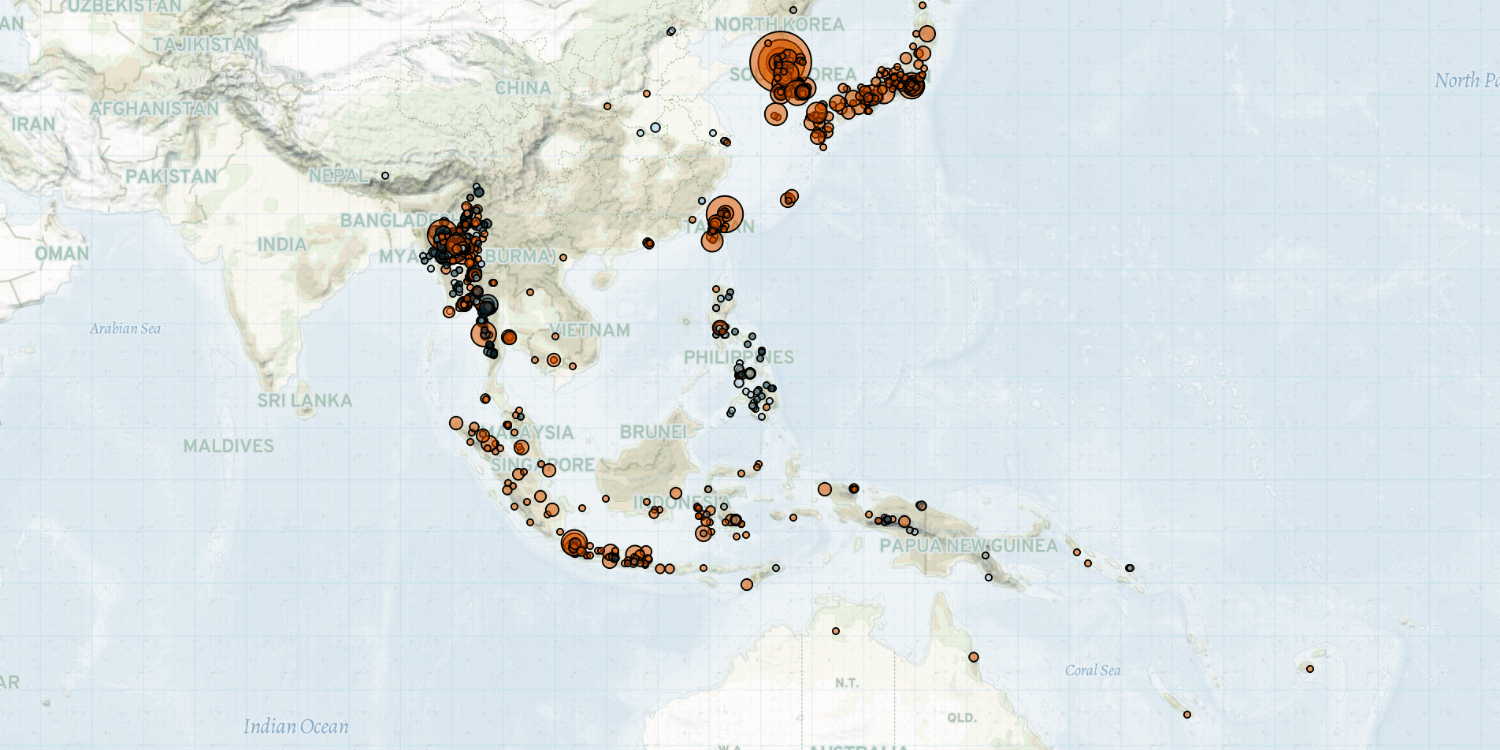 Last week in the East Asia Pacific region, heavy fighting broke out in Myanmar between the military and ethnic armed organizations (EAOs), and other armed groups, in Kayin and Kachin states. North Korea tested a banned intercontinental ballistic missile (ICBM) for the first time since 2017. In Indonesia, fighting between state forces and the separatist West Papua National Liberation Army (TPNPB) was reported amid ongoing demonstrations against the proposed creation of new provinces in Papua. In China, several demonstrations against COVID-19 lockdowns erupted following the implementation of stricter lockdown measures. In Malaysia, a detainee died in police custody amid high concerns of police brutality, as NGOs took to the streets to urge the Malaysian government to establish an Independent Police Complaints and Misconduct Commission (IPCMC). In South Korea, there were multiple protests reported demanding improvements to mobility and disability rights. In Australia, demonstrations demanding action against climate change surged in the aftermath of floods in eastern Australia.

In Myanmar, intense fighting broke out between the Myanmar military and several Karen armed groups in southern Myawaddy township in Kayin state last week. On 21 March, the combined forces of the Karen National Union/Karen National Liberation Army (KNU/KNLA), Democratic Karen Buddhist Army (DKBA [Buddhist]), and Karen National Defence Organization (KNDO) launched an offensive in Maw Khee village, Myawaddy township, seizing control of a military outpost. Meanwhile, heavy military artillery fire into Htee Hmu Htet village, following clashes with the KNU/KNLA, left a teenage girl dead and three other civilians injured. Fighting has escalated in the neighboring areas of southern Myawaddy and northern Kawkareik townships after the KNU issued a letter on 7 March demanding the Myanmar military withdraw its troops from the area (Karen News, 7 March 2022). These trends contribute to the 127% increase in violence in Kayin over the past week relative to the past month, as flagged by ACLED’s Subnational Surge Tracker. Kayin state is considered an area of ‘extreme risk’ by ACLED’s Volatility and Predictability Index, where violence is both common and highly volatile.

Elsewhere, in Kachin state, the Kachin Independence Organization/Kachin Independence Army (KIO/KIA) attacked a security checkpoint located along the Myitkyina-Mandalay Road in Myitkyina township last week. Following that, the military responded by conducting aerial bombardment in the area. A police officer was killed and four civilians were injured during the fighting. On 24 March, the military fired multiple rounds of artillery at the KIO/KIA headquarters in Lai Zar town on the Myanmar-China border, some of which fell on the Chinese side of the border. The offensive comes after reports that the military is planning to drive KIO/KIA troops out of the area in order to build a strategic road that connects to the Chinese border (Kachin News Group, 21 March 2022). Since 12 March, the Myanmar military has deployed 300 soldiers to the area, with additional backing from a military-supported People’s Militia Force (PMF) from Waingmaw (Kachin News Group, 17 March 2022). Like violence in Kayin, violence in Kachin is also both common and highly volatile, making it an area of ‘extreme risk’ by ACLED’s Volatility and Predictability Index; 10 of Myanmar’s 15 administrative territories are home to such common and highly volatile violence, making it the country with the most administrative divisions at such ‘extreme risk’ in the world.

On 24 March, North Korea test-fired the Hwasong-17, a new type of ICBM, from the Sunan area towards waters off the east coast of North Korea, near Japanese territorial waters (AP, 25 March 2022). The test is the twelfth missile launch this year and the first ICBM test since November 2017, ending their self-imposed moratorium on testing long-range missiles (Channel News Asia, 24 March 2022). The projectile flew for a longer time at a higher maximum altitude than the previous ones and may be able to reach targets across the entire US territory (ABC News, 25 March 2022). Multiple governments, including South Korea, the US, and Japan, condemn the launch as a breach of the moratorium and obligations under numerous UN Security Council resolutions (RFA, 24 March 2022). South Korea’s military responded with live-fire drills of its missiles, underscoring a revival of tensions as nuclear negotiations remain frozen (AP, 25 March 2022).

In Indonesia, police from the Mobile Brigade Corps clashed with TPNPB rebels last week in Baya Biru district, Paniai Regency, Papua province. According to Indonesian authorities, no casualties resulted from the clash (Tribunnews, 21 March 2022). The TPNPB, however, claims to have killed an officer and to have set fire to a police post (Suara Papua, 22 March 2022). A day later, on 20 March, the rebels set fire to houses that belonged to traditional miners, health workers, and teachers in the same district (Kompas, 21 March 2022). The TPNPB is opposed to central government development projects in the region and has targeted people accused of working for the government. ACLED’s Subnational Surge Tracker first warned of increased violence to come in Papua in the past month. Meanwhile, demonstrations against the proposed creation of new provinces in Papua continued last week in Indonesia. Papuan students held protests in Java, Papua, and Kalimantan.

In China, rioting erupted in Shenzhen and Shanghai last week in response to strict government measures to suppress a growing COVID-19 outbreak, with rioters tearing down tents at mass COVID-19 testing sites and scuffling with healthcare workers. In Shanghai, over a hundred nurses also went on strike and protested, demanding better protection in a newly-converted COVID-19 quarantine facility (CLB, 22 March 2022). As Omicron infections surge in China, several cities have imposed travel bans and lockdowns as part of a ‘zero-tolerance COVID-19’ policy (New York Times, 14 March 2022).

In Malaysia, a Chinese ethnic detainee died on 23 March in police custody in Seberang Perai prison, Sungai Jawi, Penang, after being arrested for a drug-related offense a day before. The cause of death remains unknown (Free Malaysia Today, 23 March 2022). Malaysian police have come under fire over recent years following allegations of excessive brutality (Vice, 21 July 2021). The latest death in custody comes as activists criticize the government’s failure to support investigations into police misconduct (Malaysiakini, 22 March 2022). On 22 March, members of the Coalition for Clean and Fair Elections (Bersih) and Suara Rakyat Malaysia (SUARAM) NGOs held a protest in front of the Malaysian parliament to criticize the government’s refusal to set up the IPCMC.

In South Korea, protesters affiliated with Solidarity Against Disability Discrimination (SADD) staged multiple protests in Seoul subway stations throughout last week, demanding measures to improve disability mobility rights and a budget for disability rights. SADD has led an ongoing demonstration movement since 3 December 2021, when it held a subway ride protest to coincide with the International Day of Disabled Persons. Since the initial protest on 3 December, ACLED records 29 SADD-led subway ride demonstration events. While they have gained political backing from progressive politicians — for example, a Justice Party politician attended a protest last week — the demonstrations have drawn criticism for disrupting metro services during commute hours. As part of their campaign, SADD also urged the Presidential Transition Committee of the newly-elected Yoon Seok-yeol last week to promote their rights (Hankook Ilbo, 22 March 2022).

In Australia, demonstrations calling for immediate actions on climate change surged last week in response to severe floods in eastern Australia that have resulted in 22 deaths and the displacement of hundreds of families since late February (New York Times, 24 March 2022). Dozens of climate demonstration events were held across the country on 25 March, including a ‘School Strike 4 Climate rally’ outside Kirribilli House, the prime minister’s official second residence, in Sydney. The demonstrations coincided with a global day of climate action organized by the Fridays For Future movement (Sydney Morning Herald, 25 March 2022), with demonstrations demanding action for climate change also reported in Indonesia and South Korea.