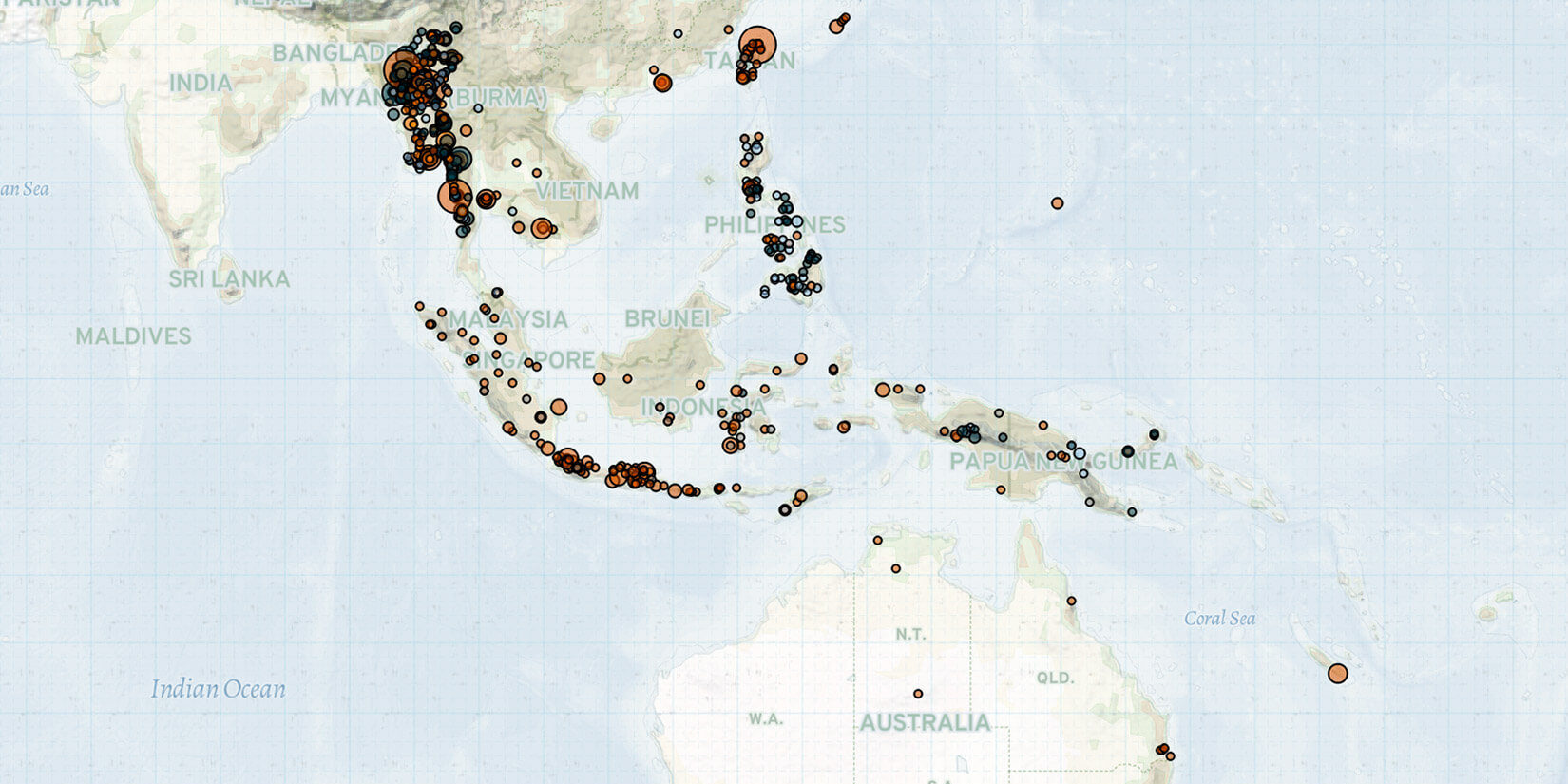 A number of new developments took place over the past two weeks in the East Asia Pacific region. In Myanmar, fighting between the military and resistance groups continued amid the emergence of new pro-junta militias. North Korea held a large military parade and conducted its 14th missile test of 2022. Islamist and rebel violence were recorded in the Philippines and Indonesia. In China, riots erupted in Shanghai amid stringent COVID-19 lockdowns. In Japan, demonstrations were held across the country to oppose revisions to the constitution. In South Korea, the main opposition People Power Party (PPP) held multiple demonstrations against prosecution reform. In Singapore, hundreds of people held a protest demanding the abolition of the death penalty. Meanwhile, labor unions across the region held rallies to mark International Workers’ Day on 1 May.

In Myanmar, new pro-military militias have emerged in recent weeks and carried out targeted attacks on civilians with reported connections to the National League for Democracy (NLD) party and the National Unity Government (NUG) (Radio Free Asia, 10 May 2022). Among the new actors is the Thway Thauk Apwe: Blood Comrades Group, which has carried out attacks in Yangon and Mandalay regions. The group has labeled its attacks “Operation Red.” Badges with the group’s name have been found on the bodies of its victims. Several NLD party members and supporters were targeted and killed by the group in the past two weeks (Radio Free Asia, 27 April 2022). The emergence of new actors can indicate a change in the conflict environment, and they often pose the greatest threat to civilians. For more on new actors in Myanmar and the region, see ACLED’s Emerging Actor Tracker.

Fighting also continued between the military and resistance groups in several locations across the country. In Chin state, local chapters of the Chinland Defense Force (CDF) fought the military across several townships, attacking a junta convoy along the Matupi-Mindat road. Violence in Chin state is both common and highly volatile; it is considered an area of ‘extreme risk’ by ACLED’s Volatility and Risk Predictability Index.

In Sagaing region, fighting was reported between the military and a coalition of local defense forces in southern Kale township. In Katha township, a combined force of the All Burma Students’ Democratic Front (ABSDF) and a local PDF clashed with military soldiers encamped in Mingalar Thukha village, forcing them to retreat to Katha town (Burma News International, 5 May 2022). Violence in Sagaing is both common and highly volatile; it too is considered an area of ‘extreme risk’ by ACLED’s Volatility and Risk Predictability Index.

In Tanintharyi region, clashes were reported across several townships between the military and resistance groups fighting alongside the KNU/KNLA and Karen National Defence Organization (KNDO). The military has recently sent reinforcements to five townships – Myeik, Tanintharyi, Dawei, Thayetchaung, and Palaw – and has increased inspections along the Myeik-Dawei-Palaw road. The KNU/KNLA Brigade 4, which operates in the region, has warned of increasing tensions in the area (Burma News International, 25 April 2022).

North Korea test-fired a suspected ballistic missile from Sunan of Pyongyang towards the ocean off the country’s east coast on 4 May (VOA, 4 May 2022). The weapon test — the 14th such test this year — came ahead of the 10 May inauguration of new South Korean President Yoon Suk-yeol. Yoon has vowed to solidify South Korea’s military alliance with the US to better cope with increasing North Korean nuclear threats (AP, 4 May 2022). Meanwhile, on 25 April, North Korea held a military parade in Kim Il Sung Square, Pyongyang, to celebrate the 90th anniversary of the founding of the Korean People’s Revolutionary Army (Radio Free Asia, 29 April 2022). During the parade, North Korean leader Kim Jong-un declared that North Korea would continue to bolster its nuclear capacity (AP News, 26 April 2022).

In the Philippines, the military carried out a major air and ground operation on 27 April against the Dawlah Islamiyah – Maute Group in Butig town, Lanao del Sur province, leading to the deaths of five militants and one government soldier. The military carried out the operation amid reports that the rebel group might be planning to disrupt the presidential elections on 9 May (Manila Bulletin, 29 April 2022). Meanwhile, there was renewed fighting between the government and the communist New People’s Army (NPA), with clashes centering on the Bicol and Caraga regions. The persistence of the fighting is still likely due to the military’s last-minute drive against the NPA as Duterte’s term comes to a close (Philippine Daily Inquirer, 9 December 2021). ACLED’s Conflict Change Map first warned of increased violence to come in the Philippines in the past month.

The Philippines entered the end of the election campaign season ahead of elections on 9 May. Election-related violence was recorded over the past two weeks, largely driven by disputes over local-level positions.1 The results of the election in the Philippines will be covered in the next ACLED Regional Overview.

Clashes between state forces and Islamist and rebel groups were also reported in Indonesia over the past two weeks. In Central Sulawesi province, state forces killed a member of the Islamic State (IS)-linked East Indonesia Mujahideen (MIT) in an armed clash reported in Sausu district, Parigi Moutong regency. Meanwhile, armed clashes between the West Papua National Liberation Army (TPNPB) and state forces continue to be reported across Papua province. ACLED’s Conflict Change Map first warned of increased violence to come in Indonesia in the past month.

In China, riots erupted in Shanghai amid the extended COVID-19 lockdowns in the city over the past two weeks. On 5 May, several hundred workers at an Apple factory clashed with security guards and authorities and stormed past isolation barriers after being banned from leaving the facilities for over a month (Radio Free Asia, 6 May 2022). In a separate incident, Shanghai residents under lockdown clashed with police on 3 May amid accusations that a supermarket was profiting from food donations provided by other provinces. China has been enforcing full or partial lockdowns in at least 27 cities since last month, affecting up to 180 million people across the country (CNN, 29 April 2022). While violence in Shanghai has not been common, it has become increasingly volatile, resulting in a shift from a place of ‘low risk’ to being considered an area of ‘growing risk’ by ACLED’s Volatility and Risk Predictability Index.

In Japan, over a dozen protest events related to the revision of the Japanese constitution were recorded across the country on 3 May, the anniversary of the ratification of Japan’s pacifist constitution. The demonstrations come in response to a proposal by the ruling Liberal Democratic Party to modify the constitution to allow Japan to acquire the capability to strike enemy bases (Japan Times, 27 April 2022). Protesters demand that the current constitution, which renounces war and the use of force, remain unchanged (for more on this, see this ACLED infographic). The government has proposed to amend Article 9 in order to define the role of the Self Defense Forces (SDF), the de facto military of Japan.

In South Korea, lawmakers of the main opposition PPP demonstrated against a push by the ruling Democratic Party (DP) to reduce, and ultimately abolish, the national prosecutors’ office’s investigative powers (Korea Herald, 27 April 2022). Between 30 April and 2 May, PPP lawmakers picketed in front of the office of the president to urge the president to veto prosecution reform legislation (YNA, 2 May 2022). Despite the prosecutors’ and PPP’s strong objections, the National Assembly passed the revisions to the Prosecutors’ Office Act and Criminal Procedure Act on 30 April and 3 May, respectively. Prosecution reform was one of the most significant promises of the outgoing Moon Jae-in administration (YNA, 3 May 2022).

In Singapore, hundreds of people held a peaceful protest at the Speakers’ Corner at Hong Lim Park on 25 April (Mothership, 26 April 2022), urging the government to abolish the country’s death penalty. The protest follows the executions of two drug traffickers on 27 and 29 April. The Speakers’ Corner is the only place where Singaporeans can legally protest.

Lastly, demonstrators took to the streets across the East Asia Pacific region to mark International Workers’ Day on 1 May. Demonstrations were held in the Philippines, Indonesia, Malaysia, South Korea, Japan, Taiwan, Thailand, and Australia. In Australia, International Workers’ Day rallies were held across the country between 30 April and 2 May, with hundreds to thousands of demonstrators joining demonstrations in major cities, including Adelaide, Brisbane, Melbourne, Newcastle, and Sydney (Green Left, 1 May 2022).