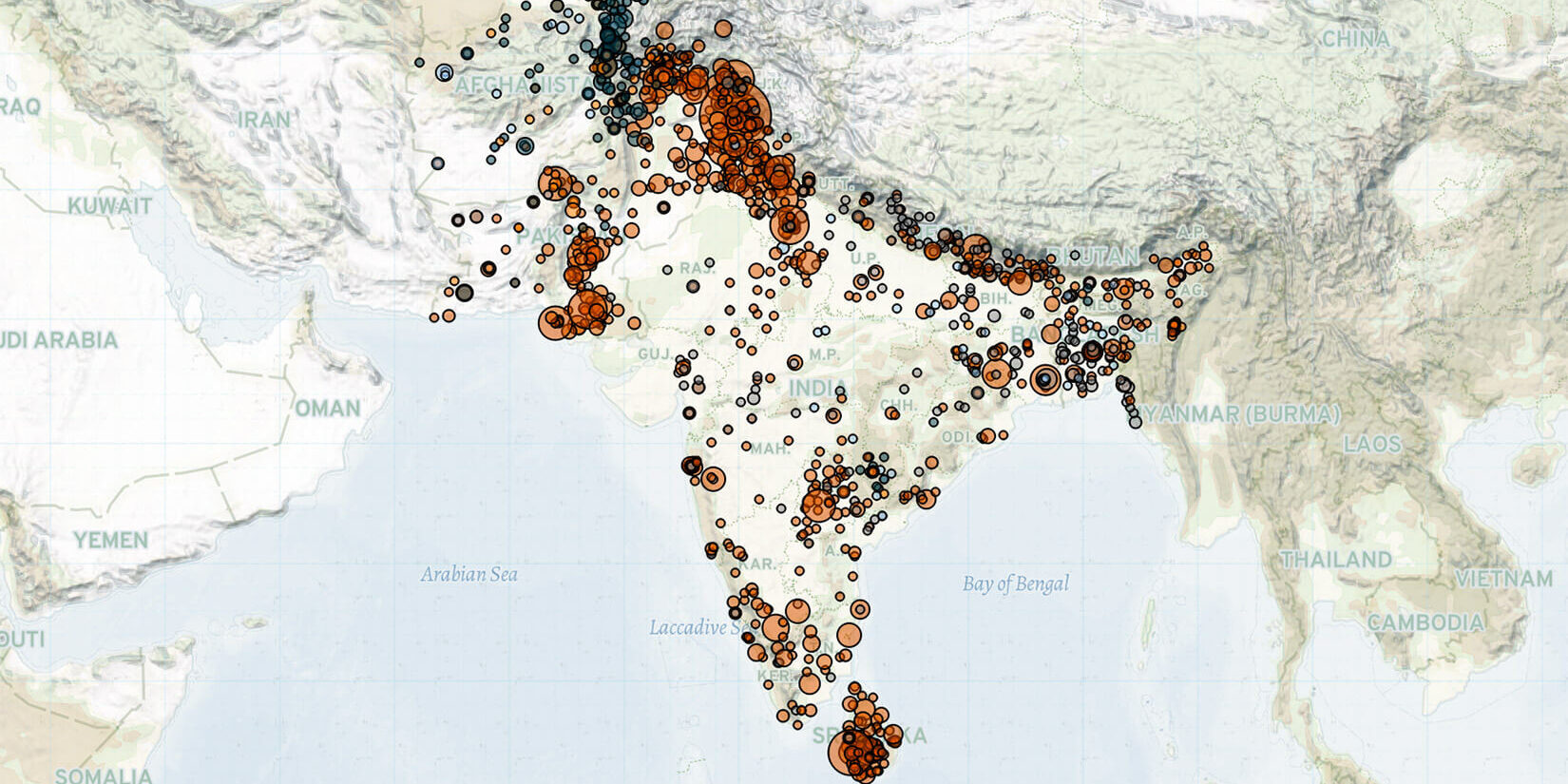 A number of new developments took place over the past two weeks in South Asia and Afghanistan. In Afghanistan, Taliban forces came under attacks from Islamic State (IS) and anti-Taliban groups, while multiple explosions around Eid Al Fitr resulted in the deaths of over 60 people. In Pakistan, Baloch separatists launched attacks in Balochistan and Sindh provinces, including a Baloch Liberation Army (BLA) suicide bombing targeting Chinese nationals in Sindh. Elsewhere, Tehreek-i-Taliban Pakistan (TTP) clashed with state forces and targeted civilians in Khyber Pakhtunkhwa. Meanwhile, IS conducted attacks against security forces, civilians, and TTP militants across several provinces. In Sri Lanka, the government imposed a state of emergency for the second time in less than two months as demonstrations intensified over the country’s worst economic crisis in decades. In India, Naxal-Maoists clashed with state forces and targeted civilians in the Red Corridor, while communal clashes broke out in Rajasthan and Gujarat states. In Nepal, election-related violence broke out in Gandaki, Karnali, Lumbini, Province 1, and Sudurpashchim provinces ahead of the local elections on 13 May. In Bangladesh, intra-party clashes broke out between rival factions of the Bangladesh Awami League (AL) in Chittagong, Khulna, and Rajshahi divisions.

In Afghanistan, the National Resistance Front (NRF) increased attacks against the Taliban in the northern provinces over the past two weeks, especially in Baghlan, Panjshir, and Takhar. The group claims to have seized Taliban checkpoints, bases, and villages in Pul-e-Hisar district of Baghlan province, Warsaj district of Takhar province, and Darah district of Panjshir, with clashes resulting in dozens of Taliban and NRF fatalities. These trends contribute to the 157% increase in violence in Panjshir last week relative to the past month as flagged by ACLED’s Subnational Surge Tracker. The Subnational Tracker first warned of increased violence to come in Panjshir, as well as Takhar, in the past month.

Additionally, the Afghanistan Freedom Front (AFF), the National Liberation Front of Afghanistan (NLFA), and IS targeted the Taliban across the country. The AFF claims to have attacked Taliban forces in Kabul, Laghman, and Parwan provinces, including an operation on the Taliban intelligence headquarters in Badghis province. Meanwhile, the NLFA, an anti-Taliban group that declared its formation in February, has claimed several attacks against the Taliban in Kabul, Kandahar, Khost, and Paktia provinces. In Khost, the NLFA claims to have killed 12 Taliban members, including the chief of Alisher district. Taliban officials ignored NLFA claims, instead claiming that a fire occurred at the Alisher district military base (Etilaat e Roz, 2 May 2022). IS also attacked Taliban forces in northeastern Afghanistan, including attacks in Kabul, Kunar, and Nangarhar, killing at least nine Taliban members.

Meanwhile, armed groups continued to carry out attacks against civilians over the past two weeks, especially targeting minority Muslim communities ahead of the Muslim holiday of Eid Al Fitr on 30 April. IS militants carried out deadly explosive attacks targeting Shiite Muslims in Balkh province and Kabul, killing at least 11 people in Mazar-i Sharif city on 28 April. Meanwhile, in the deadliest attack thus far in 2022, unidentified militants detonated an explosive during Friday prayers at a mosque in Kabul city on 29 April, killing 50 Sufi Muslims. Further explosive attacks targeted power pylons in Kabul and Parwan provinces, causing power outages across 11 provinces during Eid Al Fitr (Al Arabiya News, 30 April 2022). While some of the explosions were claimed by IS, the attackers of the other attacks remain unknown.

In Pakistan, Baloch separatists launched attacks in Balochistan and Sindh provinces over the past two weeks. In Sindh, a suicide bomber targeted a vehicle carrying Chinese nationals in Karachi district on 26 April, killing four people, including three Chinese nationals. Claiming responsibility for the attack, the BLA warns of further violent attacks on Chinese targets in the country (Al Jazeera, 27 April 2022). Chinese nationals and interests are often targeted by Baloch separatists, due to Beijing’s increasing economic footprint in resource-rich Balochistan (Reuters, 26 April 2022). The BLA also claims that the attack was the first suicide attack perpetrated by a woman in the Baloch insurgency (The Guardian, 26 April 2022). In Balochistan, at least one fatality and multiple injuries were reported across separate attacks involving Baloch separatist groups, including the BLA, Baloch Liberation Front (BLF), and the Baloch Republican Guard (BRG). Meanwhile, BLF and BRG militants destroyed mobile phone towers and a railway track across several districts. Violence in Balochistan is both common and highly volatile; it is considered an area of ‘extreme risk’ by ACLED’s Volatility and Risk Predictability Index.

In northwestern Pakistan, TTP militants clashed with state forces, and targeted security forces and civilians with explosive and grenade attacks, in Khyber Pakhtunkhwa province during the past two weeks. Multiple fatalities were reported across separate attacks in a number of districts in the province. Meanwhile, armed assailants from Afghanistan attacked a Pakistani military check post along the border in North Waziristan district, killing three soldiers and injuring four others. The incident comes after Pakistan issued a statement on 17 April saying cross-border attacks from Afghanistan targeting its security forces have significantly increased in recent weeks (Government of Pakistan, 17 April 2022).

Meanwhile, IS militants targeted security forces and civilians in a number of districts across Balochistan, Khyber Pakhtunkhwa, and Punjab provinces. Multiple fatalities were reported in these attacks. The militants also conducted an IED explosion targeting TTP militants in Bajaur district in Khyber Pakhtunkhwa, killing one militant and injuring three others.

In Sri Lanka, demonstrators intensified anti-government demonstration activity in the past two weeks, demanding the resignation of President Gotabaya Rajapaksa and Prime Minister Mahinda Rajapaksa. Sri Lanka is facing one of its worst economic crises in recent decades. A deteriorating currency and acute shortages in fuel, pharmaceuticals, cooking gas, and hours of power cuts have culminated in protests across the country (Newsfirst, 14 March 2022). Amid the demonstrations, police used teargas and water cannons to disperse students who were attempting to storm the national parliament. As the demonstrations escalated, President Rajapaksa declared a state of emergency for the second time in five weeks (The Guardian, 6 May 2022). Meanwhile, hundreds of trade unions held a nationwide general strike on 28 April across the country, demanding the resignation of the government (Al Jazeera, 29 April 2022).

In India, Naxal-Maoists clashed with state forces and targeted civilians in the Red Corridor over the past two weeks. Multiple fatalities were reported across separate attacks involving Naxal-Maoist rebels, including the Communist Party of India (Maoist) and the People’s Liberation Front of India (PLFI) in Bihar, Chhattisgarh, and Jharkhand states. ACLED’s Subnational Threat Tracker first warned of increased violence to come in both Bihar and Jharkhand in the past month.

Meanwhile, communal clashes involving Hindu and Muslim groups broke out in Rajasthan and Gujarat states in the past two weeks. Several clashes between members of Hindu and Muslim communities broke out in Rajasthan over the raising of religious flags during celebrations of the Hindu festival of Parashuram Jayanti on 3 May and the Muslim holiday of Eid Al Fitr. In Gujarat, at least one fatality was reported in clashes between Hindu groups over the use of loudspeakers outside temples. These trends contribute to the 150% increase in violence in Rajasthan and 129% increase in violence in Gujarat last week relative to the past month flagged by ACLED’s Subnational Surge Tracker, which first warned of increased violence to come in the latter in the past month.

In Nepal, election-related clashes broke out in Gandaki, Karnali, Lumbini, Province 1, and Sudurpashchim provinces in the past two weeks, ahead of the local elections on 13 May. The clashes contributed to the 174% increase in violence in Nepal last week relative to the past month, and the 64% increase in violence last month relative to the past year, as flagged by ACLED’s Conflict Change Map, which first warned of increased violence to come in the country in the past month. Multiple injuries were reported across separate incidents of mob violence involving Communist Party of Nepal (Maoist Centre), Nepali Congress (NC), Communist Party of Nepal (Unified Marxist-Leninist), and Communist Party of Nepal (Unified Socialist) supporters. Rivalries within and between political party factions vying for influence can often lead to violence in Nepal (for more, see this recent ACLED report). Election-related violence has driven the significant increase in violence in these five provinces over the past week relative to the past month; ACLED’s Subnational Surge Tracker first warned of increased violence to come in all these provinces last month.

In Bangladesh, inter-factional clashes broke out between rival groups of AL supporters amid internal power disputes in Chittagong, Khulna, and Rajshahi divisions in the past two weeks. At least 21 AL members were injured across clashes in several districts of Chittagong, while four people were killed and at least 20 were injured in Kushtia district in Khulna. In Pabna district in Rajshahi, at least five policemen were injured in a clash between two groups of AL members, contributing to the 140% increase in violence in Rajshahi over the past week relative to the past month, as flagged by ACLED’s Subnational Surge Tracker. Violence in Rajshahi is both common and highly volatile; it is considered an area of ‘extreme risk’ by ACLED’s Volatility and Risk Predictability Index.

Lastly in South Asia, protests marking International Workers’ Day on 1 May were held by labor groups across the region in Pakistan, India, Sri Lanka, and Bangladesh.