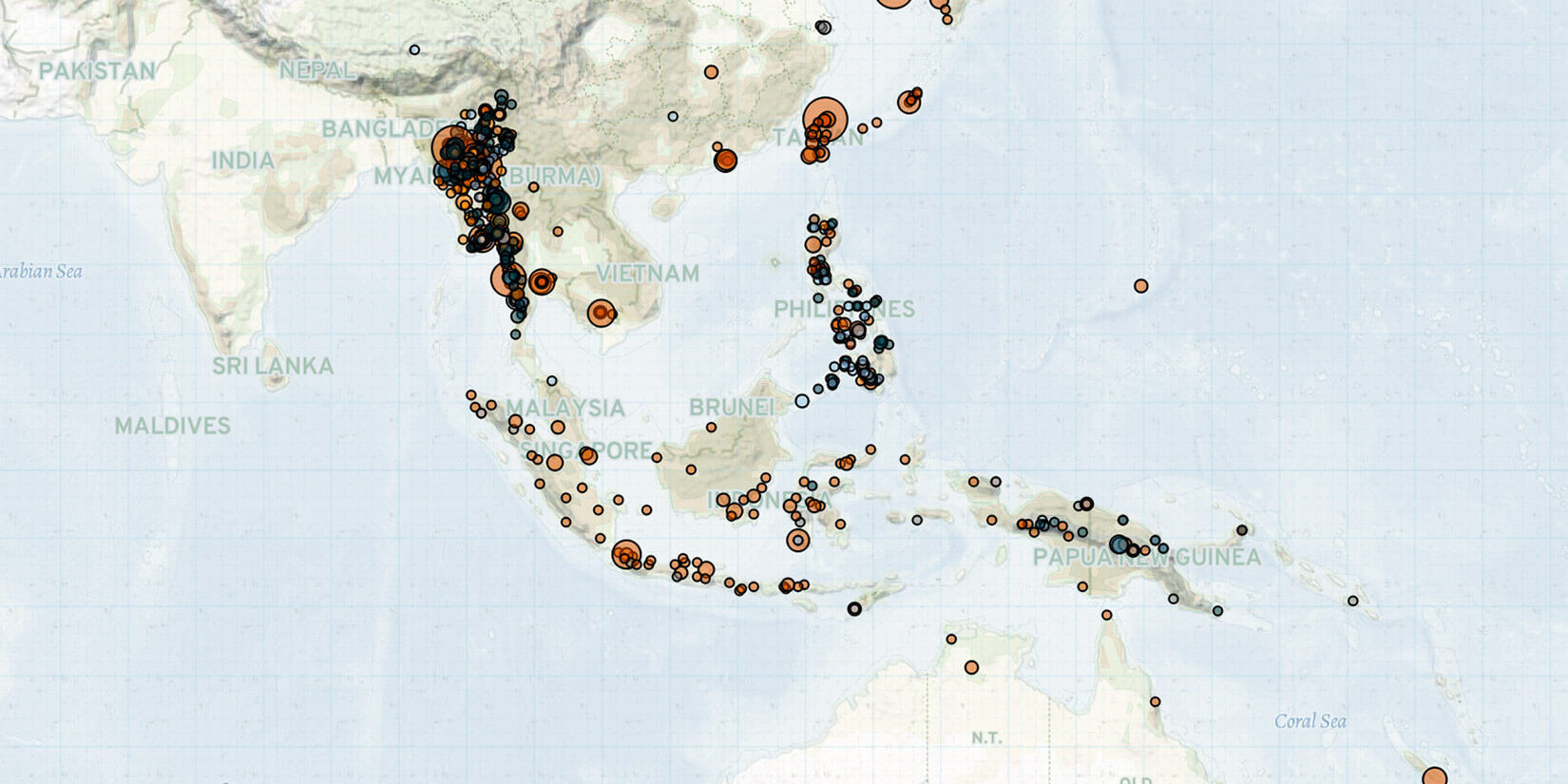 Last week in the East Asia Pacific region, conflict continued in Myanmar between the military and ethnic armed organizations (EAOs). In the Philippines, overall levels of political violence and demonstrations decreased compared to the week prior despite ongoing outbreaks of election-related violence. In Papua New Guinea, inter-clan violence continued for a second consecutive week. In Indonesia, farmers demonstrated across the country to demand the revocation of a ban on palm oil exports. In China, demonstrations against COVID-19 lockdowns erupted in Beijing. In South Korea, left-wing groups held multiple anti-US protests to coincide with US President Joe Biden’s visit to Asia. Anti-US sentiment also contributed to nationwide demonstrations in Japan on 15 May, marking the anniversary of the return of Okinawa to Japan. In Australia, protests opposing the main political parties were reported in several locations across the country ahead of the federal election on 21 May.

In Myanmar, fighting continued in eastern Kayin state last week, where combined Karen National Union/Karen National Liberation Army (KNU/KNLA) and Cobra Column forces raided and seized the Thay Baw Boe military base in Myawaddy township. Raiding forces killed five soldiers, including the base’s deputy commander, captured seven soldiers, and seized weapons (Myanmar Now, 20 May 2022). The military responded to the raid with airstrikes and artillery fire. The Thay Baw Boe base had previously been under KNU/KNLA control until 1990, when the Myanmar military seized control of the base (Irrawaddy, 19 May 2022). Violence in Kayin state is both common and highly volatile; it is considered an area of ‘extreme risk’ by ACLED’s Volatility and Risk Predictability Index.

Elsewhere, in Rakhine state, the Myanmar military carried out security checks and arrested people with alleged links to the United League of Arakan/Arakan Army (ULA/AA) last week, amid heightened tensions between the two forces. On 15 May, in Chin state, the ULA/AA fired at a military aircraft delivering food supplies to a military base in Than Htaung village of Paletwa township, leading to fighting between the two sides. The ULA/AA has warned that clashes between the ULA/AA and the Myanmar military could “resume at any time” (Myanmar Now, 17 May 2022). The ULA/AA has rejected the military’s invitation to EAOs to attend peace talks and instead recently held a virtual meeting with the National Unity Government (Development Media Group, 20 May 2022). Many other EAOs have also rejected the peace talks called by the military, viewing them as an attempt by the military to sow division between the groups and the broader anti-coup resistance (The Diplomat, 26 April 2022).

In Nay Pyi Taw, the Nay Pyi Taw People’s Defense Force (PDF) — under the command of the National Unity Government — and an unidentified local guerilla force bombed a group of military supporters gathering for a pro-military rally; six people were injured. Meanwhile, state forces carried out a mass arrest in Yangon region. The military arrested over 40 people, including supporters of the National League for Democracy (NLD), those participating in the Civil Disobedience Movement (CDM), and their relatives in Kawhmu township between 16 and 17 May (Radio Free Asia, 17 May 2022).

In the Philippines, overall political violence and demonstration levels decreased last week, following nationwide elections the week prior. However, election-related violence continued to be reported ahead of special elections scheduled for Lanao del Sur Province, Bangsamoro Autonomous Region in Muslim Mindanao (BARMM) on 24 May. Special elections were scheduled for 14 barangays (villages) in Lanao del Sur province, after regular polls on 9 May were declared void by the Commission on Elections due to irregularities and election day violence (Manila Bulletin, 22 May 2022). In the lead-up to the special elections, a grenade attack on the election headquarters of a mayoral candidate was recorded on 19 May in Barangay Tangcal, one of the barangays holding special elections. These trends contribute to the 309% increase in violence in BARMM last month relative to the past year flagged by ACLED’s Subnational Threat Tracker. The Subnational Tracker first warned of increased violence to come in BARMM in the past month.

In Papua New Guinea, inter-clan violence continued last week in Enga province. On 14 May, Aiyala clan militiamen shot dead three men from the Nomali clan as they salvaged belongings from a lodge in Paiam that was burnt down during deadly clashes between Aiyala and Nomali clan militias the week prior. At a peace negotiation meeting in Porgera on 17 May, Nomali community leaders agreed not to retaliate and to allow the authorities to charge the perpetrators (The National, 19 May 2022). ACLED’s Emerging Actor Tracker flagged several communal militia groups, including the Aiyala clan militia, as emerging actors over the past month in Papua New Guinea. The presence of emerging actors indicates a change in the conflict environment, with civilians often bearing the burden of such new activity.

In Indonesia, farmers across the country took to the streets last week to oppose the government’s palm oil export ban due to drops in their incomes. On 28 April, Indonesia, one of the world’s top palm oil exporters, introduced a ban on palm oil exports to control soaring prices of cooking oil on the domestic market (Reuters, 17 May 2022). The demonstrators, however, argue that this has led to a drastic drop in palm fruit prices. Following nationwide demonstrations, President Joko Widodo’s government announced on 19 May that the ban would end the following week (Al Jazeera, 20 May 2022).

In South Korea, demonstrations calling for the withdrawal of US military forces from the country were held last week, coinciding with US President Biden’s summit with new South Korean President Yoon Suk-yeol on 20 May. Protesters affiliated with the Anti-American Alliance, mainly comprised of the People’s Democracy Party (PDP), held a demonstration march in Seoul, calling for the withdrawal of US forces from South Korea. Likewise, the Korean Progressive University Student Union members took to the streets in opposition to the alliance between South Korea and the US, objecting to extensive military drills and increased weapons deployment.

In Japan, anti-US military protests were also held across the country last week, coinciding with the 50th anniversary of the return of Okinawa to Japan on 15 May. Demonstrators opposed continued US military presence in Okinawa, expressing concerns over environmental pollution resulting from US military activity, instances of sexual violence involving US troops, and military accidents. Anti-US military base protests are one of the largest protest trends in Japan.

In Australia, protests in opposition to the country’s two major political parties, the Liberal Party and the Labor Party, occurred across multiple states in the lead-up to the federal election on 21 May. The largest of these was a gathering of several thousand people at a ‘freedom rally’ in Perth on 14 May, calling for voters to shun both major parties in favor of smaller parties (West Australian, 14 May 2022).