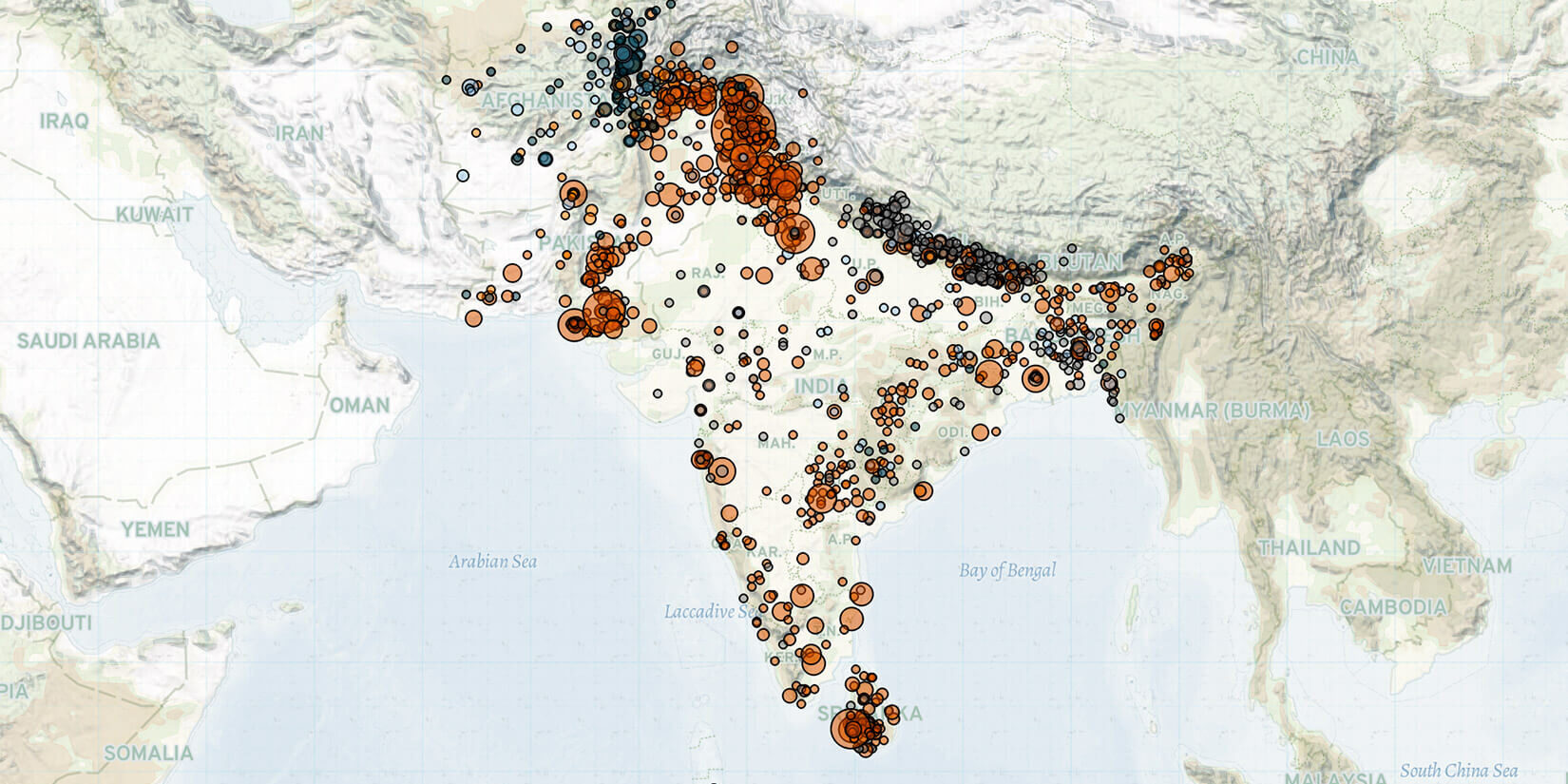 Last week in South Asia and Afghanistan, the Taliban came under attacks from anti-Taliban groups and Islamic State (IS) in Afghanistan. The group also clashed with the Tajik military along the border as the Pakistani military conducted cross-border shelling into Afghanistan, injuring civilians. In Pakistan, Baloch separatists continued to target state forces and civilians in Balochistan province, while security forces conducted operations against Tehreek-i-Taliban Pakistan (TTP) militants in Khyber Pakhtunkhwa. In Sri Lanka, anti-government demonstrations continued amid the country’s worst economic crisis in decades. In India, Naxal-Maoist rebels targeted state forces and development projects in the Red Corridor, while demonstrations against the recent targeted killing of a Kashmiri Pandit were held in Jammu and Kashmir (J&K). In Nepal, poll-related clashes continued across several provinces following the conclusion of local elections on 13 May.

In Afghanistan, anti-Taliban groups continued to attack the Taliban across the country last week. The Afghanistan Freedom Front claimed to have killed and injured multiple Taliban members in Baghlan and Kandahar province, while the Afghanistan Liberation Movement attacked the Taliban in Ghazni province. Additionally, unidentified groups killed five Taliban members in Sheberghan city of Jowzjan province and at least four more on the Kunduz-Baghlan highway. The National Resistance Front (NRF) also continued to clash with the Taliban last week, although the number of NRF-Taliban clashes decreased compared to the week prior. According to some experts, the decline in these clashes may be the result of the Taliban’s offensive and mobilization of special units to Panjshir in recent weeks, although the NRF continues to control large parts of the province (India Today, 21 May 2022).

In a separate development, Taliban forces clashed with Tajik forces in Hazrati Imam Sahib district of Kunduz province last week, along the border with Tajikistan. Further details of the incident, including any resulting casualties, remain unknown. While this is the first reported clash between Taliban government forces and the Tajik army, Taliban forces have clashed with other neighboring militaries in recent months. Since coming to power, the Taliban has engaged in border clashes with Turkmen, Iranian, and — more frequently — Pakistani state forces. Meanwhile, in Kunar province, Pakistani forces shelled Nari district, wounding at least six children. Despite ongoing outbreaks of violence, experts suggest that neighboring countries are unlikely to escalate such tensions to avoid further instability in the region (World Politics Review, 23 May 2022).

Meanwhile, IS targeted Taliban forces in Kabul, Nangarhar, Takhar, and Kunar, inflicting at least six fatalities. IS also opened fire on members of the Shiite Muslim community in Kunduz city on 19 May, killing two people. The following day, an explosive went off during the funeral of the victims, wounding at least three more civilians. This attack was not claimed by any group. These attacks and Taliban-Tajik military clashes contribute to the 167% increase in violence in Kunduz last week relative to the past month as flagged by ACLED’s Subnational Surge Tracker. The Subnational Tracker first warned of increased violence to come in Kunduz in the past month.

​​In Pakistan, security forces conducted operations against TTP militants in Khyber Pakhtunkhwa province last week, resulting in multiple fatalities across separate clashes in a number of districts. Clashes between state forces and the TTP contributed to the 107% increase in violence in Khyber Pakhtunkhwa last week relative to the past month, as flagged by ACLED’s Subnational Surge Tracker. The Subnational Tracker first warned of increased violence to come in Khyber Pakhtunkhwa in the past month. Despite the surge in violence, the TTP announced an extension of a ceasefire with Pakistani state forces on 18 May, after the two sides held an initial round of talks hosted by the Taliban government in Afghanistan (Al Jazeera, 19 May 2022). The ceasefire, which began on 10 May, has been extended to 30 May. The Pakistan government has not yet commented on the talks (The News, 18 May 2022).

Meanwhile, in Balochistan province, Baloch separatists continued to target security forces and civilians with both remote violence and direct attacks last week. Multiple fatalities were reported across separate attacks involving Baloch separatist groups, including the Baloch Liberation Army (BLA) and the Baloch Nationalist Army (BNA), in a number of districts. TTP and Baloch separatist activity contributed to the 35% increase in violence in Pakistan over the past week relative to the past month, as flagged by ACLED’s Conflict Change Map.

In Sri Lanka, anti-government demonstrations over the country’s ongoing economic crisis continued in several provinces last week, despite decreased levels of violence compared to the week prior. Demonstrators continued to push their anti-government campaign, rejecting the appointment of new Prime Minister Ranil Wickremesinghe of the United National Party (UNP). Meanwhile, the government revoked the country’s state of emergency on 20 May, 14 days after its imposition on 6 May (Colombo Page, 21 May 2022). Sri Lanka has been facing one of its worst economic crises in recent decades, with a deteriorating currency, regular power cuts, and acute shortages in fuel, pharmaceuticals, and cooking gas (Newsfirst, 14 March 2022).

In India, Naxal-Maoist rebels used remote violence against state forces and targeted development projects in the Red Corridor last week. Rebels injured a member of the Chhattisgarh Armed Force (CAF) in an IED attack in Chhattisgarh state and set ablaze multiple vehicles engaged in the construction of roads and bridges in Maharashtra and Jharkhand. Naxal-Maoist rebels also killed a former cadre — and suspected police informer — in Gadchiroli district, Maharashtra. Heightened Naxal-Maoist activity contributed to the 112% increase in violence in Maharashtra last month relative to the past year, as flagged by ACLED’s Subnational Threat Tracker.

Elsewhere in India, members of the Kashmiri Pandit community held demonstrations across several districts in J&K last week against the targeted killing of a Kashmiri Pandit by militants in Chadoora town in Badgam district on 12 May. Meanwhile, Lashkar-e-Taiba (LeT) militants hurled a grenade at a liquor store owned by a member of the Hindu community in Baramulla district, killing one person and injuring three others.

In Nepal, election-related clashes continued across several provinces last week, including Province 1, Bagmati, and Madhesh provinces, following the conclusion of the local elections on 13 May. Multiple injuries were reported across separate incidents of mob violence involving Communist Party of Nepal (Maoist Centre), Nepali Congress (NC), Communist Party of Nepal (Unified Marxist-Leninist), Democratic Socialist Party (LSP), People’s Socialist Party Nepal (JSPN), and Communist Party of Nepal (Unified Socialist) supporters. These clashes contributed to the 617% increase in violence in Nepal last month relative to the past year, as flagged by ACLED’s Conflict Change Map, which first warned of increased violence to come in the country in the past month. Rivalries within and between political party factions vying for influence can often lead to violence in Nepal (for more, see this recent ACLED report).