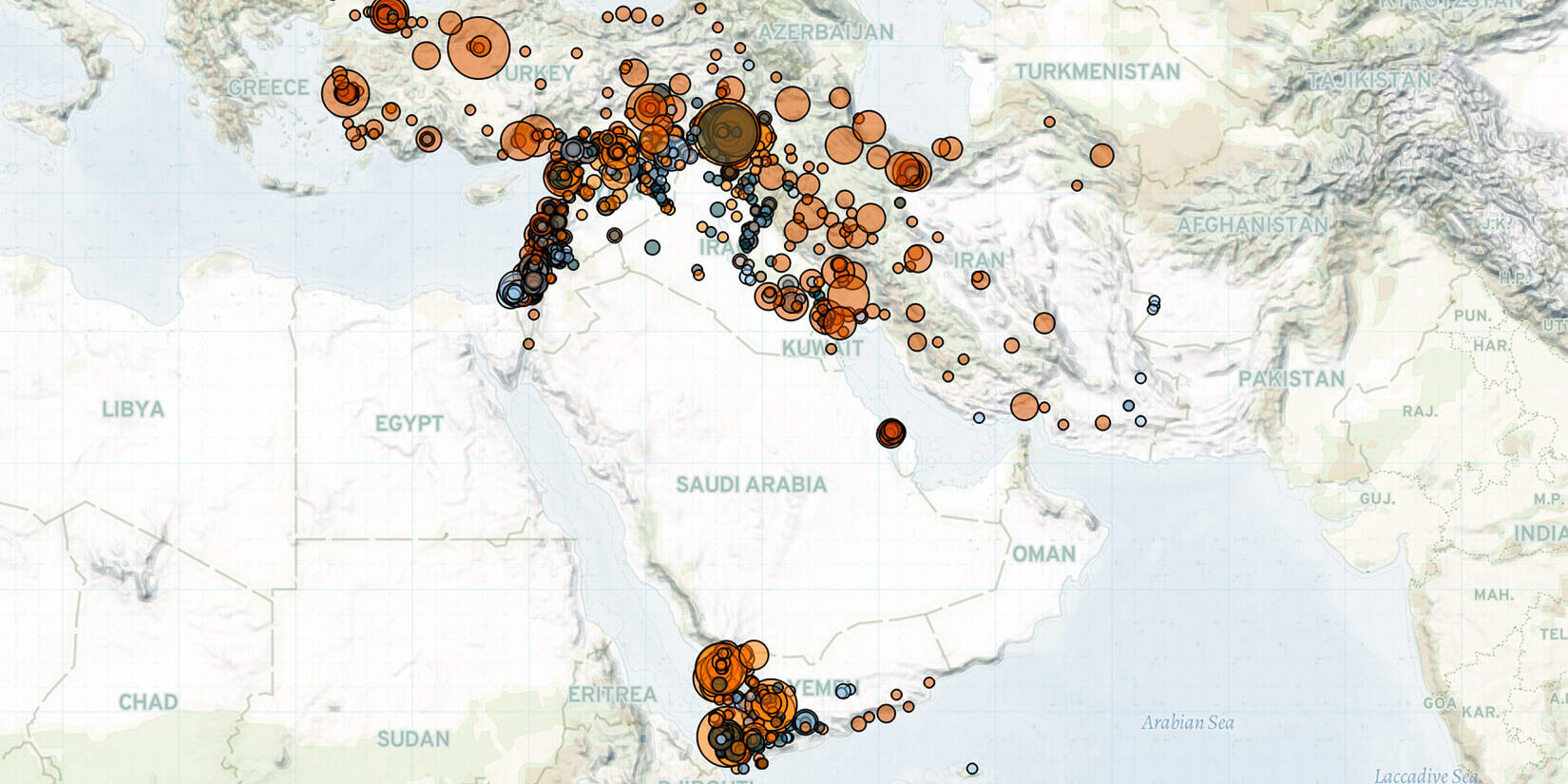 Last week in the Middle East, political violence decreased in Yemen after it reached its highest levels since the start of the UN-mediated truce the week prior. In Iraq, state forces increased counter-Islamic State (IS) activity. In Syria, IS resumed its targeting of regime forces in the Syrian desert. In Palestine, four clashes were recorded between Israeli forces and Palestinian militants in the West Bank, leaving three Palestinian gunmen dead. In Turkey, Turkish forces clashed with Kurdistan Workers Party (PKK) militants, while health workers organized at least 12 protest events across the country to demand improved salaries and job conditions. In Iran, protest activity significantly increased nationwide.

In Yemen, political violence decreased last week after it reached its highest levels since the start of the UN-mediated truce the week prior, with notable decreases in Ad Dali and Sadah governorates. Fluctuations in truce violations have been common in both governorates (see ACLED’s Yemen Truce Monitor for more on truce violations). Despite last week’s decrease, recent increases in Sadah contribute to a 111% increase in violence in the governorate in the past month relative to the past year flagged by ACLED’s Subnational Threat Tracker, which had first warned of increased violence to come earlier in the past month.

In Marib governorate, political violence increased last week for the second consecutive week, with clashes between Houthi and Internationally Recognized Government forces taking place on the Al Kasarah and Al Mashjah fronts west of Marib city. Clashes also took place to the north and to the northwest of Taizz city, as well as in the Thirah front in Abyan governorate.

At the political level, UN Special Envoy for Yemen Hans Grundberg briefed the UN Security Council on 14 June on developments during the first two months of the truce and presented his plan of action for the remaining month and a half of the truce extension. During the briefing, Grundberg also highlighted the truce’s ongoing fragility, including the lack of progress on reopening roads in Taizz, for which he urged the Houthis to respond to the UN proposal (Office of the Special Envoy of the Secretary-General for Yemen, 14 June 2022) (for more on the impacts of the truce on political violence during its first two months, see this ACLED analysis piece). News also emerged last week that direct talks between senior Houthi and Saudi officials had resumed in May to discuss border security arrangements (Reuters, 14 June 2022).

In Syria, IS militants increased their attacks against regime forces in the Syrian desert last week. Attacks centered on regime positions in the deserts of Deir Ez Zor and Tanf in Rural Damascus, where three regime fighters were killed. Meanwhile, Turkish military operations against Syrian Democratic Forces (QSD) and People’s Protection Units (YPG)-controlled areas in northern Syria declined for the second consecutive week, with Aleppo province continuing to be the main focus of the operation. ACLED’s Subnational Threat Tracker first warned of increased violence to come in both Rural Damascus and in Aleppo in the past month. Violence against civilians also increased in the country, particularly in the QSD-controlled areas of Ar Raqqa and Al Hasakeh provinces and rebel-controlled areas in Aleppo province, where the head of a humanitarian organization was killed in an IED attack in the city of Al Bab.

Meanwhile, Iraqi state forces, including the Popular Mobilization Forces, increased operations against IS militants in Iraq last week. Iraqi forces conducted airstrikes against IS in Kirkuk and Salah Al Din and destroyed IS hideouts in Anbar and Diyala provinces. This violence contributed to the 64% increase in violence in Iraq in the past month relative to the past year flagged by ACLED’s Conflict Change Map, which first warned of increased violence to come in the country in the past month. Violence targeting civilians also increased.Unidentified militants shot and killed three civilians in separate attacks in Baghdad city, while attacks targeting civilians also took place in Kerbala, Qadissiya, Najaf, Duhok, and Thi Qar provinces. Attacks in Duhok and Thi Qar, including an IED attack targeting a government bank employee in the latter, contribute to the 189% and the 180% increases, respectively, in violence in both provinces last week relative to the past month flagged by ACLED’s Subnational Surge Tracker. The Subnational Tracker first warned of increased violence to come in both provinces in the past month.

Meanwhile, in northern Iraq, Turkey escalated its air campaign against the PKK last week, reversing a four-week trend of declining fighting between the two. In Duhok specifically, while violence has been common, it has become increasingly volatile, resulting in a shift from a place of ‘consistent risk’ to being considered an area of ‘extreme risk’ by ACLED’s Volatility and Risk Predictability Index.Turkish airstrikes also destroyed a Sinjar Resistance Units headquarters in Ninewa province and killed high-value PKK targets in Salah Al Din province.

Meanwhile, Turkish health workers organized protests in at least 12 cities across the country last week to demand better salaries and work conditions. Various medical unions and groups joined the protests, including the Trade Union of Employees in Public Health and Social Services (SES), Ankara Medical Chamber (ATO), Turkish Medical Association (TTB), and the Family Physicians Association Federation (AHDF) (Mezopotamya Agency, 15 June 2022). These protests are in part a response to the rising anger of broad sections of the working class against inflation and social inequality, as well as being a part of a global movement of strikes and protests by health care workers (Balkan Insight, 15 June 2022).

In Palestine, Israeli forces clashed with Palestinian gunmen on four separate occasions last week, with clashes in Hebron, Nablus, and Jenin governorates in the West Bank. During a clash in the Jenin refugee camp, Israeli forces killed three Palestinian militants and injured 10 others. In recent months, the Jenin refugee camp has become a hotbed of increased violence between Israeli forces and Palestinian gunmen and rioters (Al Monitor, 20 May 2022). This contributed to the 59% increase in violence in Palestine in the past month relative to the past year flagged by ACLED’s Conflict Change Map, which first warned of increased violence to come in the country in the past month.

In Iran, nationwide protest activity increased by more than half last week compared to the week prior, driven by teacher protests. The protests, which are organized by the Coordinating Council of Teachers Syndicates, and have been ongoing since last April, demand the government fully implement a teacher salary ranking bill, equalize pension payments, and release imprisoned teacher activists.