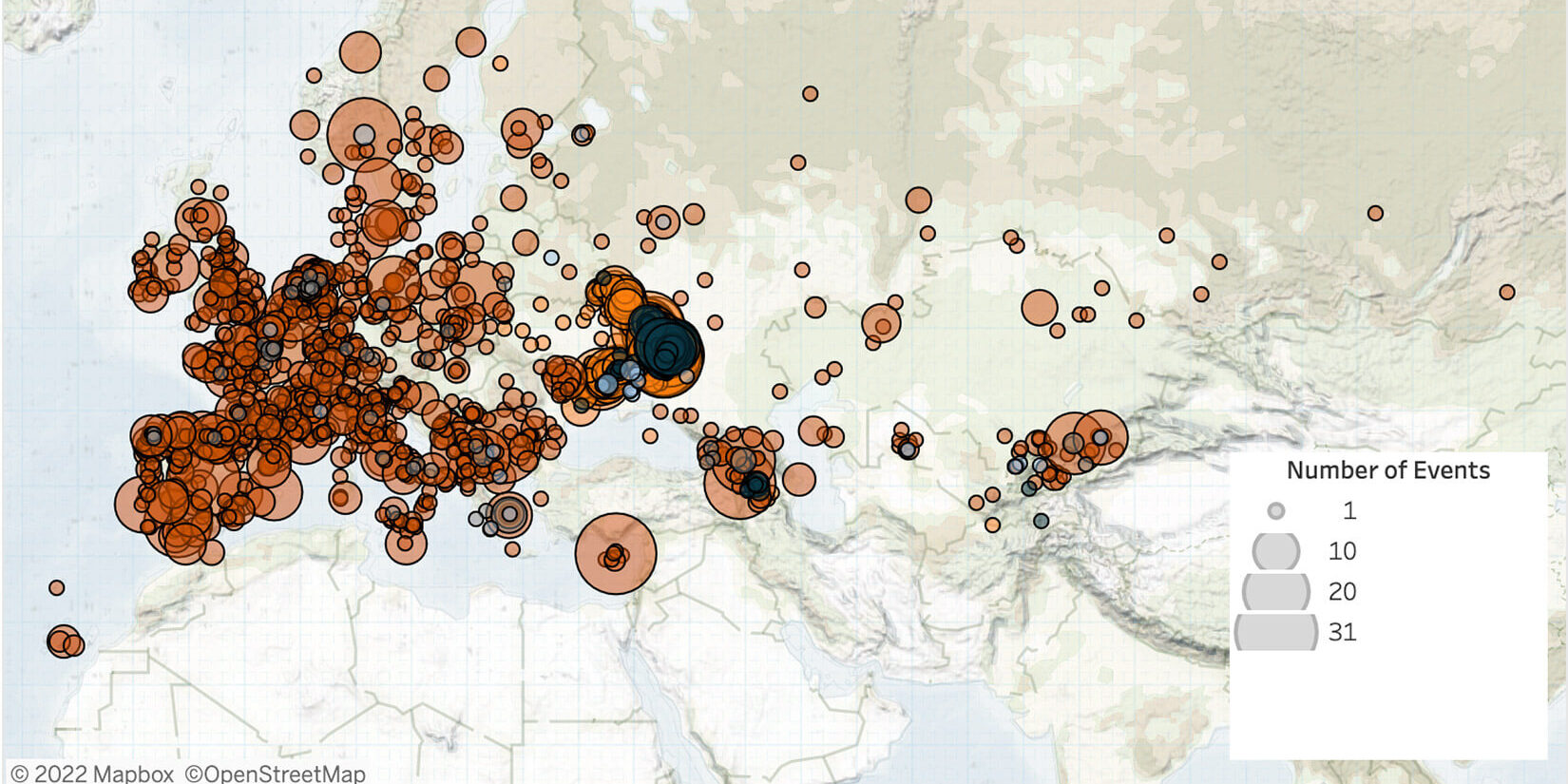 Last week in Europe, the Caucasus, and Central Asia, the Russian military invasion of Ukraine continued, as further evidence of unannounced mobilization efforts for the war surfaced in Russia. Anarchist groups clashed with riot police in Greece. Climate-related protests were held amid a heat wave across the region. In the United Kingdom, anti-racist demonstrations against the government’s Rwandan asylum plan resurfaced. In France, marches continued to be organized by the Tibetan community to demand justice following the stabbing of one of their members.

In Ukraine, fighting between Russian and Ukrainian forces continued in the eastern and southern regions of the country last week. Russian forces continued offensive operations in the Donetsk region, particularly in the areas of Siversk and Bakhmut, but have not secured any significant territorial gains (ISW, 22 July 2022). Ukrainian forces destroyed several Russian ammunition depots and military bases in the Kherson, Mykolaiv, Donetsk, and Luhansk regions last week (Zaxid.net, 21 July 2022). In Kherson, Ukrainian forces struck and seriously damaged the Antonivskyi bridge, a key for supplying Russian troops in southern Ukraine (Reuters, 20 July 2022).

Meanwhile, Russian forces continued to target civilian infrastructure with shelling and missile strikes last week. More than 50 civilians were killed by Russian forces in the Donetsk, Kharkiv, Dnipropetrovsk, Mykolaiv, and Zaporizhia regions last week.1Fatality numbers are frequently the most biased and poorly reported component of conflict data; they can vary considerably and are often the subject of debate given the strategic incentives to over- or underestimate these numbers, as well as the significant logistical difficulties in collecting accurate data, among other factors (for more, see this piece by ACLED in Washington Post, 2 October 2017).

Separately, on 22 July, Ukraine and Russia signed a deal brokered by the United Nations and Turkey aimed at resuming shipments of Ukrainian grain and mitigating the global food crisis. The agreement includes security assurances from Russia and Ukraine to ensure the safe passage of commercial ships from three Ukrainian ports in the Odesa region (Washington Post, 22 July 2022). Less than 24 hours after signing the deal, Russian forces struck the port’s infrastructure in Odesa with two missiles, while two other missiles were shot down by Ukrainian forces (Washington Post, 23 July 2022).2 ACLED data are currently updated as of 22 July 2022; this event will be included in next week’s data release.

In Russia, the governors of Belgorod, Bryansk, and Kursk regions continued to report fire on villages and checkpoints in the border area, resulting in the death of one civilian. This violence contributed to the 38% increase in violence in Russia last week relative to the past month flagged by ACLED’s Conflict Change Map, which first warned of increased violence to come in the country in the past month. The Russian government also continued its policy of ‘hidden mobilization’ of troops to make up for the losses suffered by Russian forces in Ukraine. Although further troop mobilization has not been officially announced, the Federal Service for Labour and Employment advertised in mid-June around 22,000 military contractor positions through its employment platform (Caucasian Knot, 21 July 2022). Additionally, an inmate of a penal colony in Adygea was beaten up by other inmates on orders of the administration as a punishment for having passed information about military recruitment in prisons to human rights groups (RFE/RL, 17 July 2022). Moreover, at least 234 Russian soldiers, who refused to fight and have demanded the termination of their contracts since February, were placed in illegal detention centers in the Luhansk region in Ukraine to prevent them from returning to Russia (Meduza, 21 July 2022).

In Greece, activists staged several demonstrations last week against the release on bail of a prominent director and stage actor convicted of raping minors. During a demonstration on 22 July, members of anarchist groups clashed with riot police in the central Athens neighborhood of Exarchia during a march against the release of the director and other recent cases of attempted rape (To Pontiki, 23 July 2022). Local residents accuse police of using excessive force against the demonstrators, including beating and deploying tear gas, water cannons, and stun grenades; over 50 demonstrators were detained (To Pontiki, 23 July 2022b).

Demonstrations prompted by the consequences of the unprecedented heat wave rippling through Europe were also observed across the region last week (New York Times, 18 July 2022). Environmental protests were recorded in France, Germany, the Netherlands, and the United Kingdom, where activists condemn the lack of government action to mitigate climate change, which would help prevent extreme temperatures. In Italy and Spain, protest actions were organized to denounce state management of the drought emergency and wildfires, respectively (Il Resto Del Carlino, 21 July 2022; The Guardian, 25 July 2022). Climate protests were also recorded in Denmark, Estonia, Finland, and Sweden.

In the United Kingdom, nine anti-racist demonstration events against the Rwandan asylum plan were recorded last week. The government’s five-year trial scheme previously sparked a wave of countrywide protests after it was announced in April and ahead of the scheduling of its first deportation flight, which was ultimately canceled due to legal challenges on 14 June. Critics argue that the policy, which provides for the deportation of some asylum seekers to Rwanda for the processing of their claims, constitutes a breach of the European Convention on Human Rights and has contributed to spreading racism against asylum seekers in the country (BBC News, 18 July 2022; Morning Star, 24 July 2022).

In France, for the second consecutive week, members of the French and several other European Tibetan communities gathered in Paris and in Normandy to demand justice for a Tibetan hospitality worker who was stabbed to death by his Chinese employers. While the reasons for the attack are still being investigated, a spokeswoman for the French Tibetan community said the crime had ‘revived old wounds’ among the community (Le Figaro, 18 July 2022). Meanwhile, rioting, which first began around French National Day celebrations, continued to be recorded across the country. Last week, rioters threw various projectiles, including mortar fireworks, at law enforcement officers and buildings, and set garbage bins and vehicles on fire in some instances.