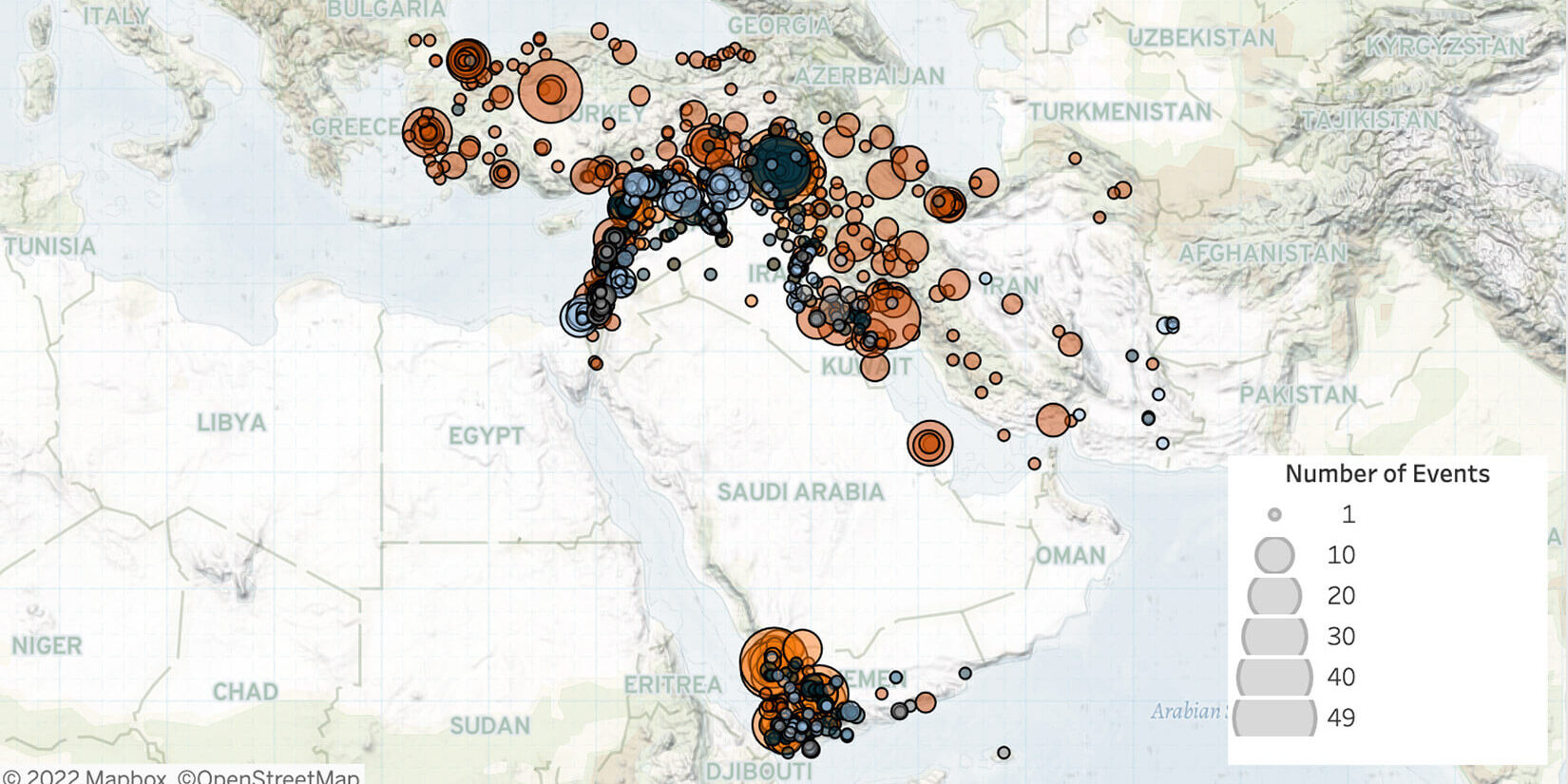 In Yemen, violence levels increased last week, driven by notable increases in Marib and Hodeidah governorates. In Hodeidah, along with increased shelling on the frontlines in the south of the governorate, last week saw the highest number of remote explosive, landmine, and IED events of the year. These developments contribute to the 121% increase in violence in the governorate over the past week relative to the past month, as flagged by ACLED’s Subnational Surge Tracker. In Sadah governorate, reports of Saudi cross-border fire last week contributed to the 100% increase in violence in the governorate in the past month relative to the past year flagged by ACLED’s Subnational Threat Tracker. The Tracker first warned of increased violence to come in Sadah in the past month.

At the political level, UN Special Envoy for Yemen Hans Grundberg intensified his efforts to extend the UN-mediated truce beyond 2 August (Office of the Special Envoy of the Secretary-General for Yemen, 21 July 2022). There was still no progress reported on the reopening of roads in Taizz and other governorates.

Separately, clashes took place between Houthi forces and local tribesmen in Al Bayda governorate last week. The clashes erupted out of a week-long siege imposed by Houthi forces on Khubzah village, after Houthi forces accuse residents of killing a Houthi fighter who had been found dead nearby (Al Masdar, 19 July 2022). Despite this, Houthi sources claim that the clashes arose from a security campaign against Al Qaeda in the Arabian Peninsula (AQAP) (Yemen Press Agency, 20 July 2022).

In Shabwah governorate, clashes erupted between factions loyal to the Political Leadership Council (PLC) in the governorate’s capital, Ataq, last week. Some sources claim that forces are preparing for a larger outbreak of violence between the Special Security Forces, affiliated with the Islah Party, and the Shabwani Defense Forces, affiliated with the UAE-back Southern Transitional Council (STC) (Al Khabar Al Yemeni, 20 July 2022).

Meanwhile, armed clashes and shelling between regime forces and rebel and Islamist factions increased significantly in the frontline areas in Hama, Aleppo, Idleb, and Lattakia provinces last week. Violence was most pronounced in Idleb province, where regime shelling killed two Ansar Tawhid fighters and Russian airstrikes killed eight displaced civilians. The increase in violence was also driven by a surge in shelling on the frontlines of Lattakia, which had experienced a steady decline in violence over the past several weeks. These trends contributed to the 243% increase in violence in Lattakia last week relative to the past month flagged by ACLED’s Subnational Surge Tracker, which first warned of increased violence to come in Lattakia in the past month.

In Iraq, an artillery strike killed nine civilians and injured 29 others in Zakho district of Duhok last week. Both Turkey and the PKK denied responsibility for the attack (ABC News, 22 July 2022). Following the strike, militants launched attacks on Turkish bases, including attacks by Liwa Ahrar Iraq and Awliya Al Dam in Ninewa and Dohuk provinces. Fighting between Turkish forces and the PKK contributed to the 134% increase in violence in Duhok in the past month relative to the past year flagged by ACLED’s Subnational Threat Tracker, which first warned of increased violence to come in Duhok in the past month. The strike also contributed to a significant increase in demonstrations in cities across Iraq, with demonstrators calling for the boycott of Turkish goods and the severing of diplomatic relations with Turkey. Demonstrations turned violent in Baghdad city where hundreds rioted for two days and attempted to forcibly enter the Turkish embassy, leading to clashes with Iraqi police (Reuters, 21 July 2022).

Elsewhere, Islamic State (IS) and unknown militants carried out attacks on Iraqi state forces in Salah Al Din province last week, including an IS attack on federal police in Mutaibijah district that left six personnel dead. These attacks contribute to the 220% increase in violence in Salah Al Din last week relative to the past month flagged by ACLED’s Subnational Surge Tracker, which first warned of increased violence to come in Salah Al Din in the past month.

In Turkey, four PKK members and one Turkish soldier were killed in violent events last week. In Diyarbakir, Turkish gendarmerie forces clashed with PKK militants in Lice and Hani districts, killing four militants. Meanwhile, a gendarmerie soldier was killed after a PKK-planted IED detonated in the Catak district of Van province. This violence contributed to the 43% increase in violence in Turkey in the past month relative to the past year flagged by ACLED’s Conflict Change Map, which first warned of increased violence to come in the country in the past month.

In Palestine and Israel last week, Israeli forces engaged in cross-border hostilities with Hamas and other Gaza-based militants. On 16 July, Hamas militants fired rockets towards the Israeli city of Ashqelon, north of Gaza. Israeli forces intercepted one of the rockets, but three others fell on empty plots of land. Israel conducted two airstrikes against Hamas military manufacturing sites in and near Gaza city in retaliation, damaging the sites and nearby civilian homes, without any reports of casualties. On 19 July, unidentified Palestinian militants in Gaza opened machine gun fire towards Netiv Haasara in Israel, damaging a locksmith’s workshop. In response, Israeli forces carried out airstrikes against Hamas observation posts and shelled a site belonging to another Palestinian armed group near Bayt Hanun, causing material damage. These trends contribute to the 105% increase in violence in the Gaza Strip over the past week relative to the past month, as flagged by ACLED’s Subnational Surge Tracker.

Meanwhile in the West Bank, unidentified armed individuals injured former Palestinian Deputy Prime Minister Nasser Al Shaer during a failed assasination attempt last week in Kafr Qallil in Nablus governorate. Hamas accuses the Fatah movement of carrying out the attack (Times of Israel, 22 July 2022). Al Shaer, who is a member of Hamas and a lecturer at An Najah University, was also attacked last month and taken to a hospital after he tried to stop plain-clothed security officers (affiliated with the Palestinian Authority/Fatah) from violently dispersing a student rally on campus.