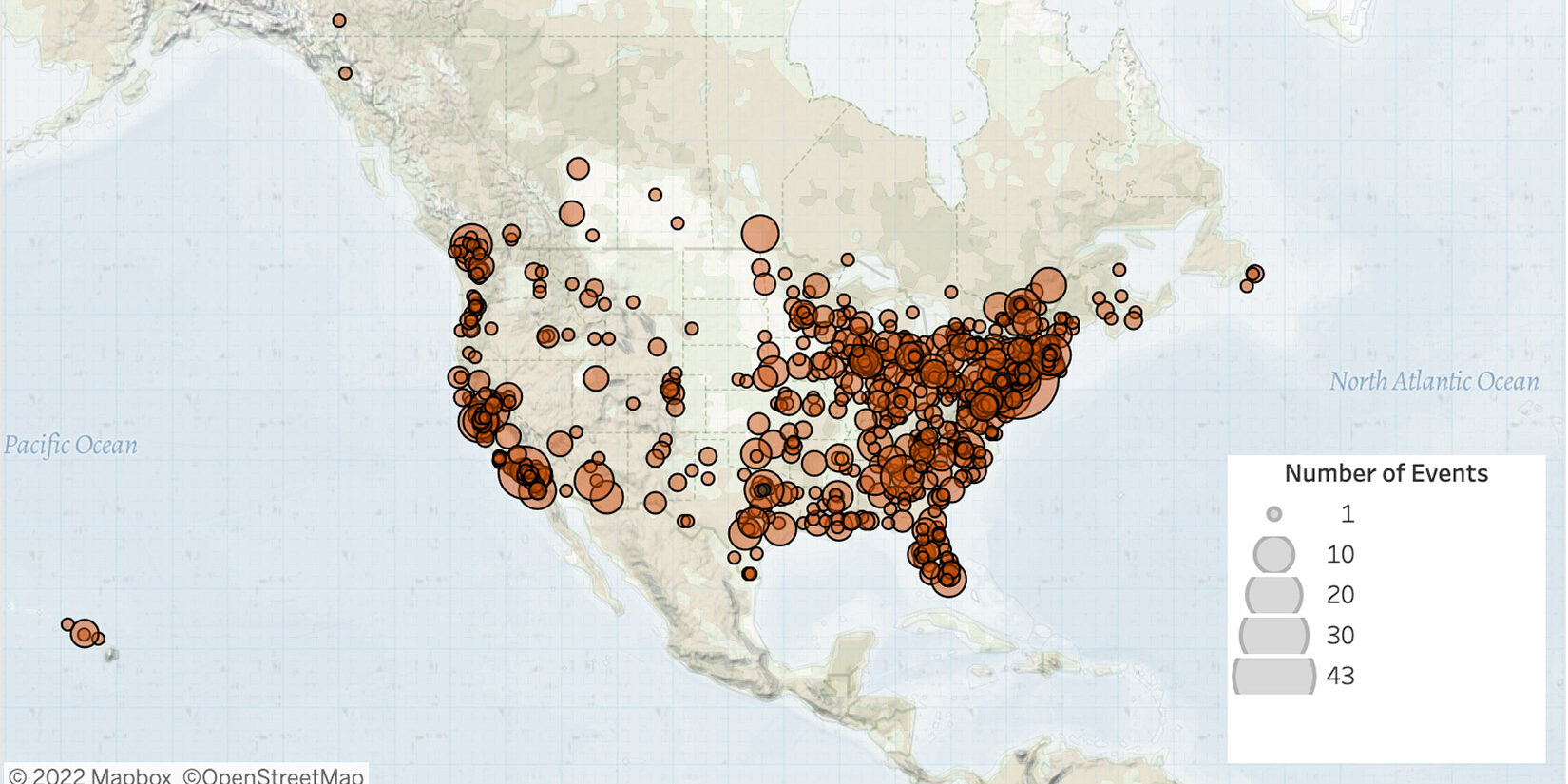 Last week in the United States and Canada, demonstration activity decreased in both countries to some of the lowest levels seen so far this year. In both countries, demonstrations by labor groups calling for better pay and working conditions constituted the largest share of events last week. In the United States, reported far-right militia and militant social movement activity remained relatively stable during the week, while white supremacist groups significantly increased activity compared to the week prior.

In Canada, demonstration activity moderately decreased last week, reaching its lowest level since the first week of 2022. Demonstrations by labor groups — including the United Steelworkers (USW), the Professional Association of Quebec Government Engineers (APIGQ), and the International Union of Elevator Constructors (IUEC) — calling for improved working conditions made up the largest share of demonstration activity. Meanwhile, members of the Ukrainian diaspora and their supporters demonstrated in at least four cities against Canada’s decision to return repaired turbines to Germany for use in the Nord Stream 1 pipeline, which transports natural gas from Russia (CBC News, 17 July 2022).

In London, Ontario, a group of people carrying Canadian flags physically disrupted a Wortley Village Pride event on 16 July, shouting homophobic comments at attendees of the event. London police arrested one man, who was charged with possession of a dangerous weapon and causing a disturbance, in relation to the incident (CTV News, 19 July 2022). Police also stated that a hate crime investigation is underway after a man was reported to have exited his vehicle and swung a two-by-four at attendees, while a woman shouted insults directed towards the LGBT+ community (CTV News, 18 July 2022).

In the United States, demonstration levels last week reached their lowest point of the year. Demonstrations in support of access to abortion declined for the fourth consecutive week, though demonstrations still took place in at least 21 states and in Washington, DC. Most notably, during a march from the Capitol building to the Supreme Court in Washington, DC, on 19 July, police arrested and issued citations to 35 people — mostly for crowding, obstructing, or incommoding — including 17 Democratic members of Congress (Washington Post, 19 July 2022).

Multiple acts of political violence were also reported last week, including a mass shooting in Indiana and police shootings in California and New York. These incidents contributed to the 68% increase in political violence events in the United States during the past four weeks relative to the weekly average for the past year flagged by ACLED’s Conflict Change Map, which first warned of increased violence to come in the country earlier in the past month.

On 17 July, a gunman armed with two rifles, a pistol, and over 100 rounds of ammunition opened fire at the Greenwood Park Mall in Greenwood, Indiana, killing three people and injuring two others before he was shot and killed by an armed bystander (CNN, 19 July 2022). Police have not released definitive information regarding a motive for the mass shooting; however, the gunman may have posted about his plans in the lead-up to the shooting on the 4chan message board (Vice, 20 July 2022).

On 18 July, officers with the Los Angeles Police Department (LAPD) shot and injured an unarmed Black man near Leimert Park in Los Angeles, California. The LAPD has not yet released detailed information regarding the events leading up to the shooting, except that they were responding to a call related to an assault with a deadly weapon. The man was not armed but was carrying a “black metal latch actuator” (Los Angeles Times, 20 July 2022). Witness accounts state that officers attempted to stop the man while he was walking, and then fired three shots towards his back as he ran away (NBC Los Angeles, 20 July 2022). In the Bronx, New York, an off-duty corrections officer fatally shot an 18-year-old in the face on 22 July. Though police have not provided a clear reason for the shooting, the officer, who has since been arrested and charged with murder, reportedly claims that he was shot in the back with a “water gel pellet,” an incident that may be related to a recent TikTok trend. The victim was found unresponsive with a toy “water gel pellet” gun a half-mile from the scene of the shooting (Washington Post, 22 July 2022).

Meanwhile, several incidents targeting the Jewish community were also reported last week. In New York, assailants shot a BB gun and, in one instance, threw eggs from a moving vehicle at five members of the Orthodox Jewish community in at least three separate incidents in Ramapoon on 17 July. Four people were arrested on charges that included hate crimes in relation to the incident (CBS News, 20 July 2022). This marks at least the 11th incident of political violence targeting Jewish people in 2022 — more than five times as many incidents as the previous year. Meanwhile, several neighborhoods in Georgetown County, South Carolina, were littered with anti-Semitic flyers around 22 July, though officials did not release any information regarding the specific content or origin of the flyers (ABC News, 22 July 2022).

In Fayetteville, Georgia, a home rented by members of a Black separatist organization, the Black Hammer Party, was raided by a SWAT team in response to a report of a person inside being held against their will by the group. An 18-year-old man was found dead inside, reportedly from a self-inflicted gunshot wound. The leader of the Black Hammer Party, Gazi Kodzo, was arrested and faces multiple charges, including aggravated sodomy, false imprisonment, kidnapping, aggravated assault, and others, according to the Fayetteville Police Department. One other person was arrested, also on charges including kidnapping and false imprisonment (The Daily Beast, 21 July 2022).

Reported far-right militia and militant social movement activity remained relatively stable last week compared to the week prior. On 16 July, the Lions of Liberty, an Oath Keepers breakaway group, held a recruitment and public information meeting in Prescott, Arizona. Elsewhere in Arizona, after a two-month lull in reported activity, Veterans on Patrol (VOP) conducted a patrol along the border with Mexico near Sasabe in Southern Arizona around 19 July, during which they claim to have encountered a migrant and handed them over to US Border Patrol officers. Meanwhile, on 18 July, the Proud Boys participated in an anti-abortion demonstration outside of a Norwalk-La Mirada School District meeting in Norwalk, California, over a proposal to place a clinic with Planned Parenthood services at a high school campus in the district.

Reported activity by openly white supremacist organizations increased last week compared to the week prior. On 17 July, Patriot Front members placed leaflets promoting the group on vehicles in Chicago, Illinois. The group also held sparring training events in undisclosed locations on 20 July in northern Texas and southern California, and on 22 July in northern Utah and central Oklahoma. This marks the group’s first recorded activity in Utah. On 16 July, members of the neo-Nazi Nationalist Social Club 131 New England group stood with a banner with white supremacist messaging in Kittery, Maine, where they also distributed flyers promoting the group. On 19 July, members of the group also dropped a similar banner over an I-95 overpass in Kennebunk, Maine. As part of efforts to spread their message and reach new audiences, offline propaganda by white supremacist groups, such as flyering and banner drops, has been on the rise (for more, see this ACLED report on the evolution of far-right activity in the United States).