Nigerians will go to the polls in 2023 amidst a host of economic, environmental, and security challenges. Many regions of the country are confronted with rampant insecurity. The northern states are engulfed in long-standing violence, with violent jihadist groups, criminal gangs, and other armed groups engaging in deadly attacks against local communities. In the south, civil unrest continues against the backdrop of ongoing violence between farmers and herders, and insurgent campaigns. Additionally, as campaigning for national and state elections ramps up, large rallies could heighten the existing security challenges and exacerbate partisan and factional tensions. Taken together, ongoing instability across Nigeria is therefore likely to affect the conduct of the upcoming elections. 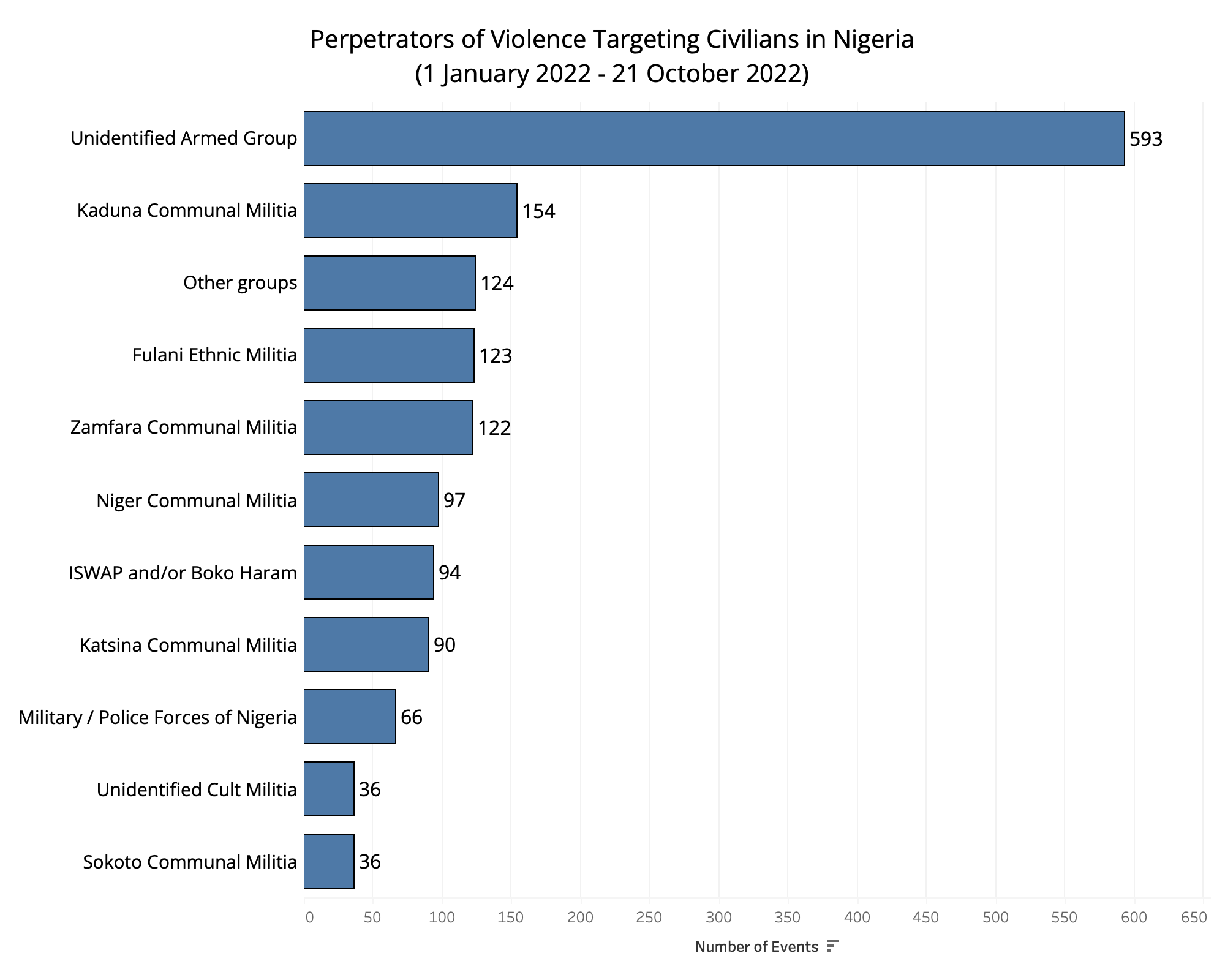 Close to 40% of all events targeting civilians in Nigeria in 2022 were perpetrated by unidentified armed groups. These events were typically less lethal than those perpetrated by other groups, with an estimated 21% of reported fatalities attributed to unidentified armed groups. Taken together, however, communal militias in five states – Kaduna, Zamfara, Niger, Katsina, and Sokoto – were responsible for nearly the same proportion of violence targeting civilians, but resulted in over half of total reported fatalities in 2022.

Frequent militia attacks have been reported across the North West. The modus operandi of the militias active in the region largely involves sporadic attacks on villages as well as forced abductions of civilians. While Kaduna, Kebbi, Sokoto, and Kano states reported such attacks in recent weeks, Zamfara state was particularly vulnerable to attacks, with 42 abducted and 35 reportedly killed over three separate incidents in the Bukkuyum area alone. Government responses to insecurity in the North West have largely consisted of kinetic military approaches, and focused primarily on Kaduna state, where Nigeria’s oldest military division is stationed. One example of the government’s approach is an airstrike conducted by the Nigerian military against militants who were meeting under tree covers in the northwest of Mando, in the Birnin Gwari LGA of Kaduna state.

The main security concerns in the North Central region are linked to elevated levels of banditry, militias, and kidnapping. In the past two weeks, reports of banditry and kidnapping have been ubiquitous in the region, including in the Federal Capital Territory. Militant and criminal activities close to the federal capital might trigger a resolute security response from the government, which aims to assuage both domestic and international concerns over spreading insecurity. In a significant development, the Defence Command claimed to have raided a hideout and clashed with an unidentified armed group in Awe LGA in Nassarawa state.

Federal troops carried out a series of coordinated attacks against ISWAP and other insurgents affiliated with Boko Haram in the region. On 9 October, the Nigerian Armed Forces conducted an airstrike against an unspecified number of jihadist militants in Kafa town in the Damboa LGA of Borno state. Days later, dozens of militants were reportedly killed as the army repelled two ISWAP attacks in Bama and Ngala LGAs of Borno. Another offensive was launched along the Kumshe-Banki road in the Bama LGA of Borno, where the army said it inflicted several fatalities on the militants. ISWAP and Boko Haram’s activities in the North East remain a cause for concern as insurgents wage attacks against government forces and set up checkpoints. An improvised explosive device along the Maiduguri-Damboa-Chibok road that reportedly killed and injured several people attests to the ongoing threat for road travel in the area.

The South West continued to remain susceptible to inter-communal clashes, mob violence, and unrest. Over the past few weeks, demonstrations were held in all states of the region, with occasional violent escalation in the area of Lagos. As no party holds control of the region, electoral violence is expected to continue in the coming months. Yet, there are also opportunities for peace in the region. Ekiti and Osun states held off-cycle elections this year, meaning that the potential for electoral violence is diminished as those states will not hold governorship elections in 2023.

In the South East, unknown gunmen were responsible for multiple attacks against security targets and civilians. Enugu, Ebonyi, and Anambra are among the states that witnessed the most attacks during the reporting period. In one such attack, an armed group shot and reportedly killed four soldiers in the Iyiachi community of Enugu State. Some of these attacks are attributed to the secessionist IPOB, which has ramped up its insurgency against the federal authorities in recent months. Yet, with the electoral competition exacerbating factional divisions, there are concerns that political parties could be behind such unclaimed attacks against their opponents. On 9 October, gunmen killed a youth leader of the APC in the Igbo-Eze South LGA of Enugu State, while another attack targeted LP members in Igbo-Eze North LGA. In Abakaliki town of neighboring Ebonyi state, members of Ebubeagu – a security outfit created in April 2021 in the South East’s five ethnic Igbo states – shot at the convoy carrying the LP gubernatorial candidate.