2023 began with a new round of violent events that led the chairman of Nigeria’s Independent National Electoral Commission (INEC) to raise concerns – later denied – over a possible postponement of the elections. Among the reported incidents were attacks against INEC offices and staff, assassinations of candidates, and violent incidents between party supporters. Military operations against jihadist and bandit groups in the North West and North East also caused dozens of casualties. On the political front, INEC has also made several key announcements in the lead-up to the election. Notably, they announced the total number of confirmed registered voters and an extension to the collection of permanent voters’ cards at the ward level. Political parties and politicians continue to prepare for the upcoming election, unveiling platforms with diaspora and diplomatic communities and announcing prestigious endorsements. 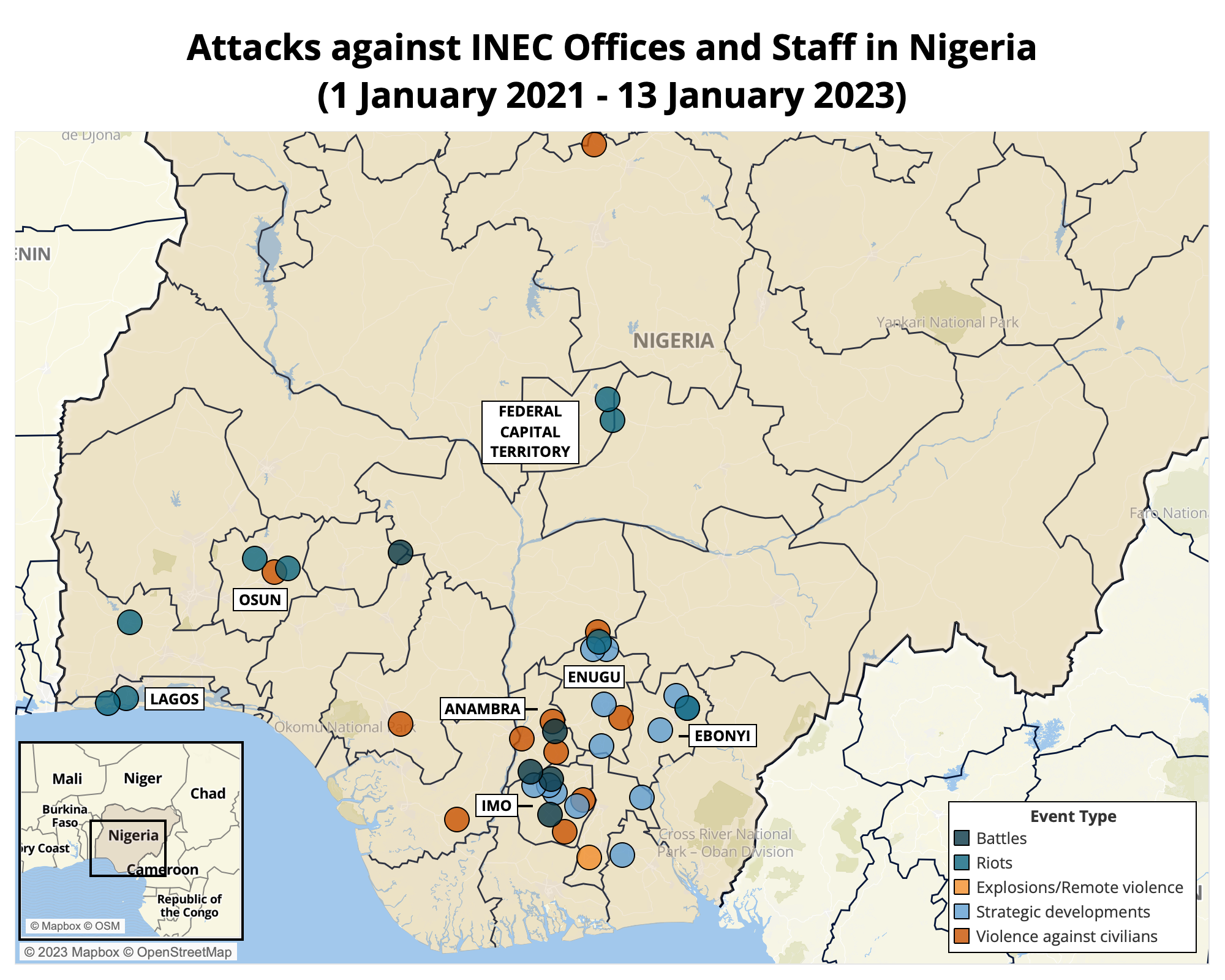 In recent years, offices of Nigeria’s INEC have often been the target of violent attacks. ACLED records at least 134 incidents involving INEC offices and staff between 2019 and 2022.1ACLED figures differ from those provided by INEC, which reported 50 incidents between 2019 and 2022. This discrepancy is attributed to INEC’s different catchment, which does not include “attacks on election duty officials” (The Cable, 17 December 2022). Among these events are lootings, arson attacks, shootings, as well as abductions and assassinations of electoral officers. The number of attacks was highest in the run up to the last elections in 2019 (65 recorded events), followed by 2020 (32 events), 2021 (19 events) and 2022 (18 events). The 2019 election cycle was associated with a significant spike in the violence, with 47 events recorded between February and March 2019. Another 14 were recorded in Bayelsa and Kogi states during the November 2019 gubernatorial elections. Polling stations across central and southern Nigeria were also targeted during the #EndSars movement in 2020. More recently, violence targeting INEC facilities has clustered in the South East, which was home to over two-thirds of the total events recorded between 2021 and 2022. Nigerian police have blamed the recent string of attacks targeting polling stations and INEC staff in the South East on the IPOB. The secessionist group, however, has distanced itself from the violence, reaffirming its intention to boycott the elections. The violence has continued through 2023. Another four attacks – two in Edo state and one each in Anambra and Enugu – were recorded by ACLED during the first half of January 2023.

Military forces continued to wage heavy offensives against militants in the North West. On 12 December, the Nigerian Air Force fired rockets at and destroyed the house of a Kaduna militia leader called Alhaji Lawan around Ligarma, in Igabi LGA of Kaduna state. The Nigerian Air Force provided additional support to ground troops conducting clearance operations in the area. Several militiamen were reportedly killed, and their camps were destroyed. Ground forces, including police, supported the air operation by blocking the roads leading to the LGAs and conducting house-to-house searches to prevent the militias from fleeing the assault. A botched airstrike by the Nigerian military reportedly killed an estimated 64 people in Mutumji, a village situated in Maru LGA of Zamfara. The victims reportedly included armed bandits as well as civilians, among them women and children. The air force intervened on 18 December after residents of Malele, Ruwan Tofa, and Yan-Awake communities called on the military to protect them from raiding bandits. Other security incidents were reported in Katsina state, where militants attempted to abduct residents from the Dutsinma area, and in Sokoto, where gunmen reportedly killed three men and abducted another 10 near Sabon Birni.

A string of abductions were reported across the North Central region. On 21 December, unidentified gunmen abducted a woman from her house in Ogane-Aji-Anyigba in Dekina LGA, Kogi state. The kidnappers initially made a ransom request of two million Nairas (NGN) before settling for a sum of 300,000 NGN (about US$650). On 10 January, an unidentified armed group abducted another 15 people in Kwara state, including a community leader from the Oluwalose community. The kidnappers invaded the community on motorcycles and took the victims.  Abductions did not spare even the Federal Capital Territory. On 3 January,  an unidentified armed group reportedly killed one of the 16 people that were abducted on 11 November as they were returning to Kuje. Another four men were abducted on 1 January in Kubwa LGA.

The North Central states also grappled with a new round of pastoralist-farmer conflicts that have long marred the region. On 14 December, an unidentified armed group killed cows belonging to Fulani pastoralists in Adaka community of Benue state, after the cows reportedly invaded residents’ rice farms. In a separate development, on 8 January, Fulani gunmen reportedly killed a farmer in Eshijiko, Kwara state, after the farmer urged the pastoralists to drive cows away from his land. The killing provoked a reprisal attack that resulted in many Fulani settlements being set on fire.

Nigerian military forces continued to engage with jihadist groups in the North East. During the reporting period, the Nigerian army claimed to have killed hundreds of militants in Borno state as a result of several airstrikes and ground operations. Boko Haram’s dominant faction, the Islamic State West Africa Province (ISWAP), also claimed to have waged several attacks against the troops of Operation Hadin Kai. In Borno state,  ISWAP also claimed to have set a church and six houses ablaze. In a separate development, internecine fighting broke out on 30 December between ISWAP and the Group for the Propagation of the Prophet’s Teachings and Jihad (JAS) faction of Boko Haram led by jihadist commander Bakura Doro. The fighting escalated when JAS militants attempted to drive ISWAP fighters out of their positions in Abadam LGA, near the border in the Lake Chad Basin. Elsewhere across the region, unidentified militants abducted three people in Garin Dogo community, Taraba state. A ransom of 60 million NGN (about US$130,000) was paid, but the abductees, three siblings, were reportedly murdered.

Violent clashes broke out in the South West region, involving members of rival cult militias. Between 28 December and 3 January, members of the Black Axe cult and the Eiye confraternity clashed in Ojo LGA, Lagos state, after a member of the Black Axe – also known as Aye – was reportedly murdered in the town of Igbede. At least two people reportedly died in the ensuing clashes. Additionally, a PDP chieftain was killed in Oyo township after alleged APC supporters attacked him in his residence. The APC denied party supporters were responsible for the killing and demanded a police investigation. Other unrest was reported in the region, with the Yoruba Nation Agitators demonstrating at the Gani Fawehinmi Freedom Park in Ojota, Lagos, demanding the creation of the Oduduwa Republic as a separate nation for the Yoruba ethnic group.

An armed group suspected to consist of Fulani herdsmen attacked the train station in Igueben, Edo state, abducting 31 passengers waiting to board a train. The assailants, armed with AK-47 rifles, invaded the train station and fired multiple shots, injuring some passengers before retreating into the bush. Police forces and vigilantes later rescued five victims, including a retired police officer, a woman, and three kids. In a separate development, unidentified gunmen shot at the PDP youth mobilization officer in Rivers state on his way home. Additionally, a former Edo State House of Assembly member was abducted in Ubiaja, in Esan South East LGA of Edo state, while traveling to Abuja. There were also reports of attacks against INEC centers in Edo state. Demonstrations were instead reported in Benin City, Edo state, where pensioners dressed in black attire demanded the overdue payments, and Yenagoa in Bayelsa state, where LP members protested the refusal of the state government to conduct local elections.

Reports of election-related violence also emerged in the South East. On 16 December, an LP candidate was murdered in Onuimo LGA, reportedly when unidentified gunmen invaded his residence. Additionally, internecine fighting erupted on 26 December in Ebonyi state between loyalists of the state APC chairman and the House of Representatives candidate for Afikpo North/South federal constituency. Three people were reportedly killed: a policeman, a community youth leader, and the APC chairman’s younger brother. On 12 January, an unidentified armed group, consisting of alleged APC supporters, attacked NNPP members in Abakaliki, Ebonyi state, during a grassroots consultation rally. The INEC office in Enugu South was also the target of a violent attack on 15 January, which reportedly led to the death of a policeman. The gunmen attempted to raid the office, but were prevented from accessing the main building due to the joint intervention by police and military forces. In other developments, turf wars between suspected cult militiamen reportedly claimed at least five deaths in Anambra state between 2 and 4 January.