The ramping up of election-related activities – campaigning, town halls, and rallies – coincided with an uptick in election-related violence over the past three weeks. There has been an increase in the number of violent incidents involving political party affiliates, party supporters, and election profiteers in the run-up to the election. The situation has been deemed serious enough to warrant a review of election and security strategies by the Independent National Electoral Commission (INEC), the National Security Adviser (NSA), and other stakeholders. INEC Chairman Mahmood Yakubu called on security agencies to act swiftly by arresting and prosecuting the perpetrators of election-related violence in accordance with the law, and to reinforce security around electoral personnel and infrastructure. These developments come at a time of increased socio-economic instability, with the National Bureau of Statistics announcing that 130 million Nigerians currently live in poverty. 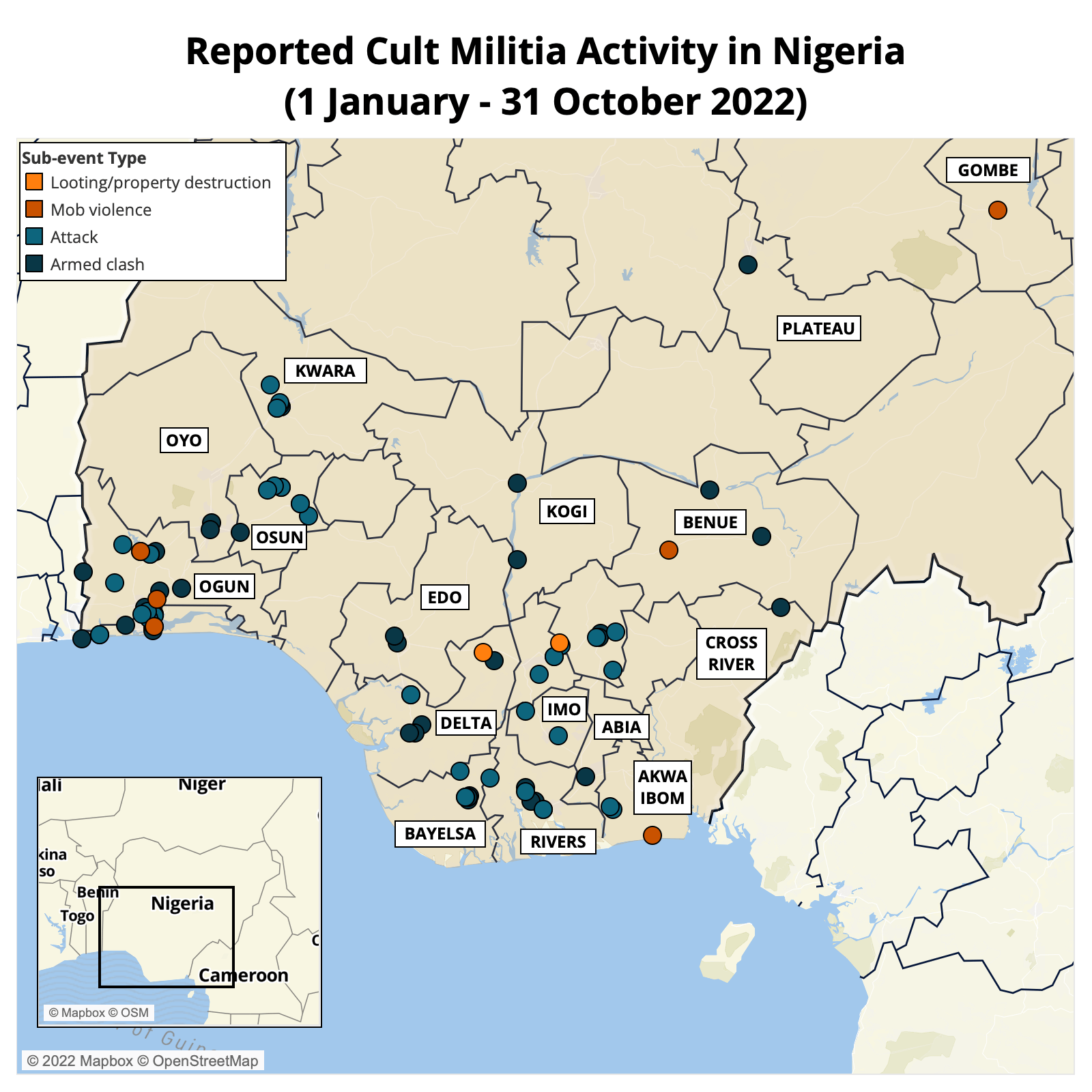 Violent cult militias and student fraternities operate in several states across southern Nigeria. These cults, which often operate outside universities and in secrecy, wage frequent attacks against former or other cult members and engage in criminal activities such as human and drug trafficking. They include groups such as the Black Axe, Eiye (which means bird in Yoruba language), Icelanders, Greenlanders, and Vikings. Between January and October 2022, ACLED records close to 130 violent events involving cult militias, resulting in approximately 200 reported fatalities. The southern states of Delta, Lagos, Ogun, and Osun account for half of the total events recorded by ACLED in 2022, although cult militias were also reported to operate in some central states such as Benue, Kogi, and Kwara. There are concerns that cult members could be hired to commit violence against political opponents ahead of the 2023 election. Rivers Governor Wike warned in August that political parties and candidates were enlisting hired arms to inflict “mayhem, thuggery or violence” in Rivers state in preparation for the electoral campaign.

Security forces ramped up attacks against militias and bandits in the region. During the reporting period, Nigerian troops reportedly killed Dogo Maikasuwa and Kachalla Gudau, two bandit leaders active in Kaduna state. Both commanders led large groups of foot soldiers that engaged in kidnappings and killings in the Chikun and Kachia LGAs. There were also reports of armed clashes between farmers and herders, and attacks against civilians. On 7 November, unidentified armed groups of pastoralists and farmers clashed in Minjibir LGA, Kano, with at least two people killed and 10 displaced from their communities. In Zamfara state, a local militia reportedly killed at least 19 people in an attack on civilians in Riyoji village in the Dauran Birnin Tsaba area on 23 November 2022. According to media reports, the assailants shot at the victims while they were trying to escape from the village.

As the election draws closer, ongoing violence in the region continues to involve farmers, herders, local militias, and security operatives. Niger state has become a hotspot for militia violence, with multiple reports of militias attacking, vandalizing, and looting residents and farmer communities during the reporting period. A joint security task force consisting of soldiers and self-defense militants was deployed in response to the continued violence in the state, clashing with over 50 local gunmen at Chibani, in the Shiroro LGA of Niger state. On 22 November, an unidentified armed group attacked and reportedly killed eight civilians when they invaded the locality of Kwatas, in the Bokkos LGA of Plateau state. Several people were also wounded by the assailants, who shot indiscriminately during the attack. Separately, incidents of electoral violence were also reported across the North Central region. Over 50 members of a local defense militia armed with machetes and dane guns attacked All Progressives Congress (APC) supporters in Otukpo LGA of Benue state, injuring many. On 11 November 2022, unidentified gunmen suspected to have ties with the APC destroyed campaign billboards of the LP candidate for the House of Representatives in Okpo, Ikeje, Ibana, and other locations in Kogi state. In Kwara state, “political thugs,” suspected to have links with the APC, attacked the convoy of the PDP gubernatorial candidate in the town of Shao, in Moro LGA. Some members of the candidate’s staff were hospitalized. A local APC spokesperson denied the accusations.

In the North East, there were multiple reports of violence against women perpetrated by Boko Haram militants. At least 10 women were reportedly killed in Borno state after militants affiliated with Boko Haram accused them of practicing witchcraft. An additional 30 women were kidnapped to allegedly hold them responsible for killing the militant commander’s children. On 10 November, Boko Haram militants fired indiscriminately and abducted another two women in Jere LGA, Borno state. At the same time, Nigerian military forces announced that they conducted successful counterterrorism operations against the militants in the North East. State forces operating under the banner of Operation ‘Hadin Kai,’ alongside militants of the Civilian Joint Task Force, carried out continued attacks against the Islamic State in West Africa Province (ISWAP) and Boko Haram. On 24 November, Nigerian troops ambushed JAS fighters near Mafa, in Borno state, reportedly killing five militants and capturing one. For its part, ISWAP conducted two attacks against Nigerian troops near the Nigerien border, killing an estimated 29 soldiers on 19 November. The complex attacks targeted two Nigerian army bases in the vicinity of Malam Fatori, in Abdama LGA of Borno state, and resulted in several vehicles destroyed and weapons seized.

In the South West, electoral violence was reported in the past three weeks against the backdrop of ongoing tensions between and within parties. A mob suspected to be affiliated with a political party set fire to the local offices of the INEC in Osun state. INEC buildings and campaign offices have often become the target of violent actions ahead of the elections. An ongoing strike launched by the Academic Staff Union of Universities (ASUU) drew several staff and students of Obafemi Awolowo University to the streets of Ile-Ife in Osun state. The participants protested against the federal government’s no-work-no-pay policy and the non-payment of their salaries during the ASUU strike. In a separate incident, unknown gunmen wearing military uniforms ambushed a bus on the Lagos-Ibadan expressway, injuring some travelers before they fled the scene after a shootout with police forces.

In the South South region, unrest continued as residents held demonstrations over poor service delivery by the federal and state governments. On 17 November, residents from Oke-Oroma community protested in Benin City, the capital of Edo state, over the proposed demolition of their properties. Five demonstrators were arrested by police. Elsewhere, leaders of internally displaced communities held protests at the office of the Environmental Rights Action in Yenagoa, Bayelsa state. They claim neglect by the state government, which has not sent relief assistance to their camps. On 25 November, thousands of former Niger Delta militants under phase one and two of the presidential amnesty program blocked Mbiama road in Rivers state over the delisting of 7,000 beneficiaries of the program and the refusal to pay their monthly stipends. While these protests were largely peaceful, there was an isolated incident of violent protests in Rivers state where a mob of over 30 rioters attacked supporters of the PDP presidential candidate who were mounting a campaign billboard in Eberi community, critically injuring one person.

Unidentified armed groups continued to be a major source of insecurity in the region. During the reporting period, unknown gunmen reportedly killed the traditional ruler of Obudi Agwa and two chiefs when they invaded the palace at Obudi-Agwa in Imo state. The victims were in a cabinet meeting when they were ambushed. The killings have sparked widespread outrage in the region. The Indigenous People of Biafra and its militant wing, the Eastern Security Network, have denied involvement in the attack. On 22 November, an unidentified armed group abducted the All Progressives Grand Alliance’s candidate for the Ahiazu state constituency in Imo state, Nduka Anyanwu, while he was on his way to Ahiazu. He was released on the same day. The region has also seen a rise in activity by Ebubeagu, a joint security outfit formed by the southeastern governors to counter rising insecurity in the region. In November, the Ebubeagu abducted Chief Abia Onyike, a journalist and former commissioner affiliated with the PDP in Ebonyi state. Onyike is a spokesperson for the PDP gubernatorial candidate in Ebonyi, Ifeanyi Chukwuma Odii, who is critical of the administration of Governor David Umahi. These recent actions have raised concerns over the Ebubeagu’s actions, with accusations of abducting, torturing, and killing opposition members and suspected militants.