With the general elections approaching, two major issues have dominated the news cycle during the first half of December. First, the increase in violence targeting facilities run by the Independent National Electoral Commission, Nigeria’s election management body. The violence has raised concerns about the safety of electoral officials, as well as the feasibility of holding elections across the country. Second, the electoral campaign has further polarized the media environment, with attacks against allegedly partisan outlets. Such attacks call into question the relations between governments and ‘non-friendly’ media institutions. 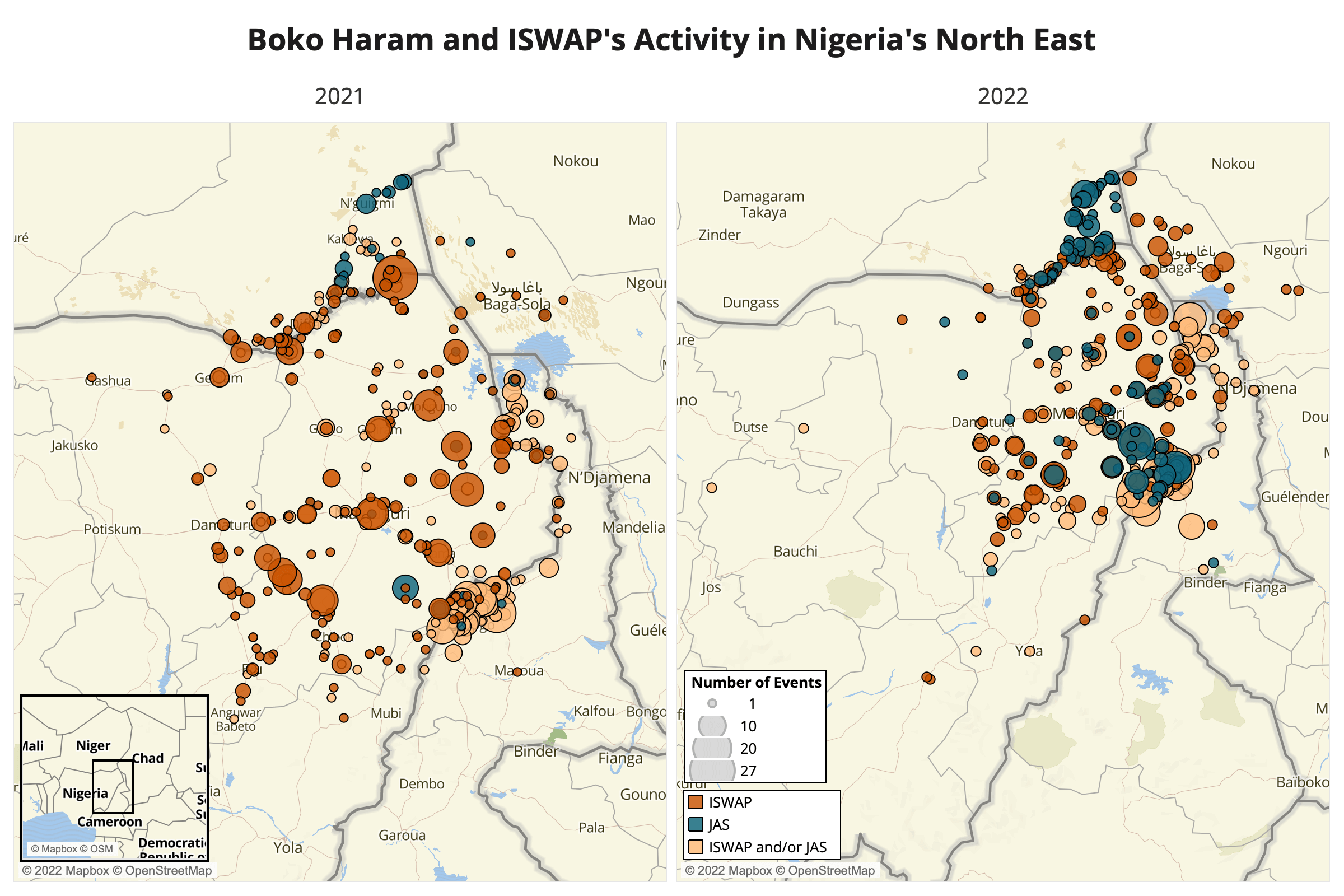 Recent infighting in the North East between Boko Haram’s JAS faction – formerly led by the late Abubakar Shekau – and the Islamic State offshoot in the region, Islamic State West Africa Province (ISWAP), highlights the transformation of the jihadist group over the past two years. JAS has significantly weakened since Shekau’s reported death in May 2021, with many of its fighters either surrendering to the Nigerian authorities or switching allegiance to ISWAP. Some have reorganized into smaller groups, such as the Bakura faction operating in the northern part of the Lake Chad Basin and other former Shekau supporters active along the Nigerian-Cameroonian border, largely engaging in attacks against civilians. ISWAP has instead taken advantage of Boko Haram’s dwindling force to expand its operations from the Lake Chad Basin into areas formerly controlled by Boko Haram, including the Sambisa Forest area to the south of the state capital Maiduguri.

Militia violence continued to affect civilian security across the region. A Zamfara-based militia attacked civilians in Zurmi reportedly killing 19 people, while in Kaduna gunmen reportedly killed 11 people in Rafin Sarki, in Giwa Local Government Area (LGA). Two other incidents involving militias in Sokoto resulted in the reported deaths of 12 people. A clash between Nigerian troops and a Kaduna militia in Giwa resulted in the death of five militiamen and the rescue of more than a dozen abducted women and children. Several attacks were politicized, with the Kebbi state government accusing PDP supporters of setting fire to a food vending business linked to the leader of the Labour Party’s presidential campaign committee in Kebbi state. The Zamfara state government instead claimed that PDP supporters destroyed APC-owned properties in Gusau during a rally organized by the PDP gubernatorial candidate. The party has rejected both instances, but parties will likely continue to trade accusations in the run-up to the elections.

The region also experienced continuing violence during the reporting period, despite a decrease in overall reported fatality numbers. On 1 December, operatives of a joint task force presumed to be composed of soldiers, police, and a local defense militia clashed with a Niger militia working for a militia leader called Alhaji Leyi at Gaskiya Bana in Muya, Niger state. This clash resulted in an estimated 20 militiamen reportedly killed, with five abductees and over 300 cattle recovered from different locations. In an election-related incident, suspected APC loyalists working for the Kogi state governor destroyed the campaign billboards of the Kogi Central PDP senatorial candidate in Adavi LGA.

Clashes between Nigerian military forces and militant groups were reported in the North East, as well as internecine fighting within the jihadist camp. Borno state was a hotbed of this violence, with fighting between Boko Haram and ISWAP militants recorded for over a week. One of the deadliest incidents was reported on 5 December, when fighters allegedly associated with Boko Haram reportedly killed 33 wives of ISWAP-affiliated militants in a reprisal attack. ISWAP fighters had laid an ambush for the Boko Haram fighters, which instead attacked the women. This fatal ambush followed a 4 December raid by Boko Haram fighters on ISWAP positions. The raid led to armed clashes in various locations of Gwoza LGA, and resulted in an estimated 23 ISWAP fighters reportedly killed in the violence, with their weapons, motorcycles, and bicycles seized.

Road transport workers have gained an increasingly important role in the run-up to the elections and have been involved in multiple violent incidents in the South West. On 28 November, a wing of the National Union of Road Transport Workers (NURTW) close to the PDP attacked members of a rival APC-linked faction in coordinated attacks at four different motor parks in Osogbo, Osun state. PDP militants stormed the parks, which are under the authority of APC loyalists, claiming that the NURTW conspired against the new governor’s election. One union member sustained machete cuts, his car was set on fire, and perpetrators fired gunshots indiscriminately. While the APC claimed that over 500 of its members were wounded in the incidents, other sources reported that only 10 persons were hurt. On the same day, a number of properties, including campaign billboards belonging to the APC presidential nominee in Osogbo, were also destroyed by unidentified perpetrators. Separately, on 3 December, rioters with suspected APC links attacked Labour Party supporters at a campaign rally in Lakowe town, Lagos state. The rioters arrived in a bus and were armed with various weapons including cutlasses, sticks, and stones, which they used to wound several people present at the rally.

Most activity recorded across the South South involved peaceful demonstrations, including protests against educational institutions following recent strikes over the non-payment of salaries. Yet, on 8 December, an unidentified armed group numbering between 30 – 200 suspected to be political militants raided the home of former Senator Lee Maeba, a member of the PDP presidential campaign council in Port Harcourt in Rivers state. While Maeba was not home, the perpetrators beat his elder brother, destroying five vehicles, and fired gunshots indiscriminately. Maeba claimed that the assailants made this attempt on his life because of his affiliation with the PDP presidential candidate. He also suggested that the assailants were working for state Governor Nyesom Wike (on Governor Wike’s role in the upcoming elections, see the 7-27 November Situation Summary). The state commissioner of Information instead accused Maeba of staging the attack. In a separate incident, suspected armed Fulani pastoralists killed a local civilian at Obelle, Rivers state, on 2 December, in a likely reprisal attack against locals after some of their cows were allegedly killed due to an argument over grazing on people’s farms in the area.

Several attacks on INEC facilities were reported in the South East region during the reporting period. On 1 December, policemen guarding an INEC office repelled militants attempting to burn an INEC office in Orlu, Imo state. The assailants, suspected to have links with the separatist Indigenous People of Biafra, invaded the area, shot sporadically, and threw an explosive device that damaged the security post of the office, before they were chased by the policemen. This was followed by another arson attack on another INEC office in Oru West, Imo state, by an unidentified armed group on 4 December. The most recent attack was by unknown gunmen On 12 December, the INEC reported an attack at their headquarters in Owerri, Imo state. An unknown gunman threw a fire bomb at the office, setting it partially on fire, with no casualties reported.1This event occurred outside the timeframe for ACLED data currently available, but will be included following the next data release. The frequency of these attacks has led to concerns about the security of election materials and officials in the state.