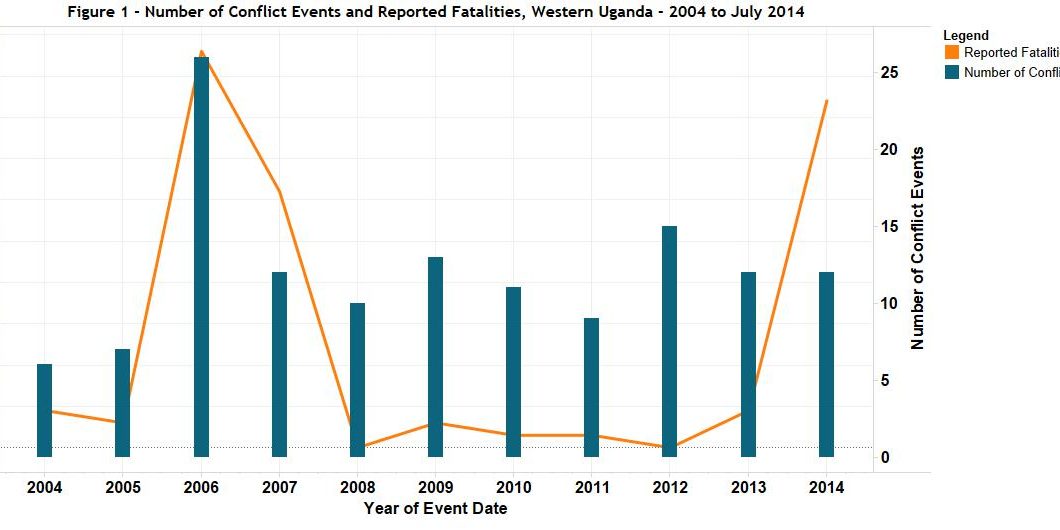 On 5 July 2014 Western Uganda, specifically the Rwenzori region covering the districts of Kasese and Bundibugyo, experienced an episode of intense violence. Armed assailants reported to be a Bakonzo militia attacked villages, police units and army barracks. By the end of the day the death toll was over 70 and included civilians, state forces and some of the attackers themselves. Mass graves related to the violence and its aftermath are still being uncovered. Figure 1 shows that the event has made 2014 the second most lethal year in the Western region of Uganda in the past decade, and the year is not yet finished.

In Western Uganda as a whole, communal and ethnic militias are relatively inactive. Historically the vast majority of political violence has been due to rebel groups such as the Allied Democratic Forces (ADF), who were concentrated in the region in a campaign against the Ugandan government. As Figure 2 shows, since 1997 ethnic militias have been responsible for a small fraction of the violent events in both the Kasese and Bundibugyo districts. While this fraction increased as the ADF insurgency wound down, the aggregate amount of ethnic militia violence remains small.

Early analyses suggest that the violence stems from the conflicting jurisdictions of the regions traditional kingdoms. In May 2014, Musuveni financed and recognised the coronation of the King of Bamba (MRGA, 2014). The Bakonzo have long argued that the Bamba fall under the jurisdiction of their Rwenzururu kingdom, while the Bamba and neighbouring groups have repeatedly refused to recognise the Bakonzo monarchy as their cultural leaders (Kagenda, 2014). Rival claims of sovereignty had previously resulted in small-scale clashes but the events of 5 July could mark a departure from the dominance of small scale generally non-fatal events. Graves, reportedly containing the bodies of Bakonzos killed in reprisals, have been uncovered (ABC, 2014).
The Bakonzo monarch, King Mumbere, called a press conference in mid-July to distance himself from the attacks. However during the conference Mumbere wore military fatigues and directly challenged to the Ugandan state forces to arrest him (Kagenda, 2014; Sserunjogi & Kahungu, 2014). This may be a sign that Bakonzo nationalism, which in the past has fuelled violent secessionist movements, may be entering a new stage of militancy.
References