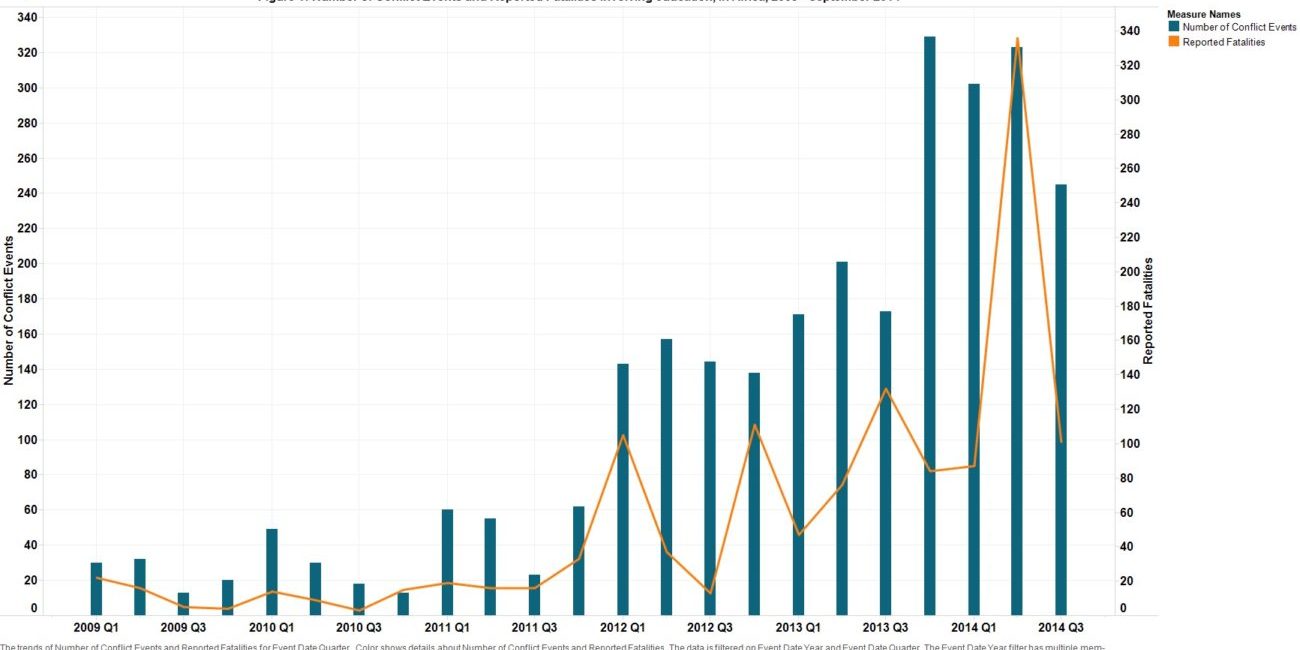 Following the announcement on the 16th October that the Nigerian government had negotiated the release of over 200 schoolgirls kidnapped from Chibok in Nigeria, the global trend of deliberate and recurrent attacks against schools and education in conflict-affect areas has received renewed attention. In Nigeria from 2012 – 2014, the ACLED dataset recorded an average of 156 school-related fatalities per year, with many of these attacks attributed to Boko Haram.

From 2009 to the second quarter of 2014, the ACLED dataset shows a steady rise in both the number of conflict events and reported fatalities that are centred around educational facilities (see Figure 1). Schools and universities across Africa are often sites of nascent, non-violent protests by students and staff, violent episodes of rioting, and are occasionally intentional targets of rebel groups for kidnapping, recruitment and political attacks.  Military forces that occupy educational infrastructure can jeopardise the safety of schoolchildren whilst restricting their right to education.

Both battles and violations against students and schools are clustered in Sub-Saharan Africa, with Nigeria, Sudan, Zimbabwe and Somalia amongst the most volatile countries (see Figure 2). Whilst the Democratic Republic of Congo has witnessed slightly fewer events than these countries, the intensity of civilian targeting has resulted in very high death tolls of education workers. Since 2009, these attacks have largely been perpetrated by the FDLR who have carried out abductions and killings on teachers and students in the South Kivu province. In comparison, North Africa’s conflict landscape is dominated by riots and protest events that have centred in universities across the region.

Attacks against educational facilities are not simply limited to non-state actors. Figure 3 demonstrates that over 67% of battles involving schools or educational facilities in Somalia involved state forces, who frequently use schools to establish military bases.  The occupation of educational infrastructure by military forces can “blur the lines between civilian and military installations” (HRW, 2011), placing civilians, who are often children, in the direct line of fire of militant groups. The establishment of military bases in schools can provoke other rebel groups to target them, which are often situated in residential areas. Other than the immediate effects of civilian casualties during conflict in educational environments, the ‘militarisation of educational space’ (Atha, 29 September 2014) serves to directly and indirectly impact civilian livelihoods in a number of ways.
First: A United Nations Office for the Coordination of Humanitarian Affairs report stated that up to August 2014, 1,188 schools had been closed in conflict-affected states in South Sudan (UNOCHA, 2014). This figure does not include those schools which were occupied by armed forces, reinforcing the severity of consequences that displacing actors have on civilians access to education (HRW, 2014). The closure of schools, and full, or partial occupation by state forces can have a significant impact on a child’s education, thus negatively impacting economic development.
Second: Strategies of targeting schools can disrupt pupils, affecting their educational attainment through fear of attacks from both militant groups and security forces. In Cameroon, threats and attacks by Boko Haram led to a drop in school attendance with students actively avoiding school in the Nigeria border region (Atha, 29 September, 2014). Furthermore, military and state forces that are stationed near schools and university premises are not only subject to attacks, but can create a repressive atmosphere. The presence of police forces and tighter security measures exacerbated tensions in Egypt last week when students held nationwide rallies at the start of the university term, with many violently dispersed by police forces. The Ministry of Higher Education employed FALCON, a private security company, to conduct screening checks at universities to maintain security. These added restrictions helped to spur student clashes.
References