Remote-Violence, Bombings and Conflict Part 3: Overall Trends in the Use of Improvised Explosive Devices 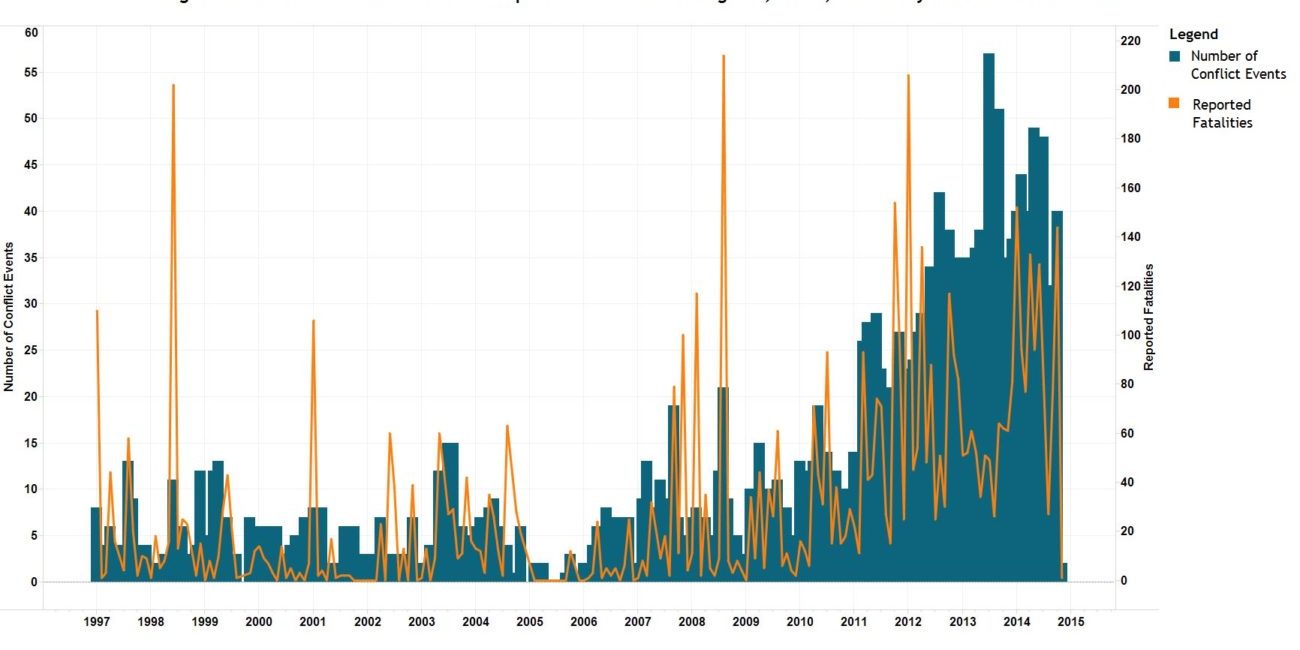 The use of improvised explosive devices (IEDs) in conflict zones across has become increasingly prevalent over the past few years (Norton-Taylor, 3 July 2014). Conflict in Africa mirrors this global trend, as the number of discrete events involving IEDs grew from 9 reports in 2005 to 468 in 2013. The number of fatalities resulting from IED attacks also increased in 2014, and accounts for 1009 fatalities, the highest on record in the ACLED for such events.

However, the relationship between IED attacks and fatalities is not linear (Figure 1). In 2012, 974 fatalities resulted from 356 discrete events, compared to 644 fatalities resulting from 468 events in 2013. Previous studies of IED attacks have previously found a weak relationship between the number of attacks and the number of fatalities. One of the main reasons for this is that the lethality of an IED is dependent upon the ability of state forces to disarm or dispose of the bomb (START, 2012). The increase in fatalities between 2013 and 2014 is due to the growth of unrest in areas such as Libya and Nigeria, where the presence of external forces and expertise has been limited, particularly in comparison to other IED hotspots such as Mali or Somalia.

Theorists have argued that IEDs function well as symbolic weapons, which can be used to demonstrate a regime’s vulnerability to violence or a government’s inability to protect its citizens (McCormick and Giordano, 2007). By targeting agents of the state, civilians, popular monuments or symbols, conflict actors can use IEDs to undermine confidence in the government and coerce public opinion and government policies (Merari, 1993). The data supports these theories: 31.8% of IED-related conflict events involve political militias using these weapons against civilians, while 26.49% involve political militias and state forces.

On the subnational level, IED-related events show a locational bias towards urban areas. Of the most active locations for IED-related violence, the vast majority are urban areas housing a population of over 150,000 (Figure 3). Subnational IED hotspots include urban areas such as Jos, Kano, Tripoli and Algiers. Urban areas create a severe security predicament for governments and IEDs that successfully detonate in these areas will cause more casualties and more effectively demonstrate the inability of the government to maintain security.
IEDs, while not purely the preserve of weak actors, are a low-cost tactic that is attractive to non-state conflict actors with a limited capacity for direct conflict (ACLED, 29 October 2014). The growth in IED usage could be due to non-state conflict actors becoming increasingly weak when compared to state forces. Over the past decade political militias have overtaken rebel groups as the primary non-state actor. Political militias now involved in 21.71% of conflict events, as opposed to 8.78% for rebel forces. Political militias typically lack the capacity or will to take control of the state. For these actors, the IED is an ideal tool to either damage state forces with minimal risk or to coerce the state without controlling it. It may be the case that as governments consolidate more control over their territory and as credible attempts to usurp state power decrease, IED-related attacks will become a more frequent fixture of African conflicts.
References