Rape as a Weapon of Political Violence, Part 2: Where, When, and by Whom is This Tactic Used? 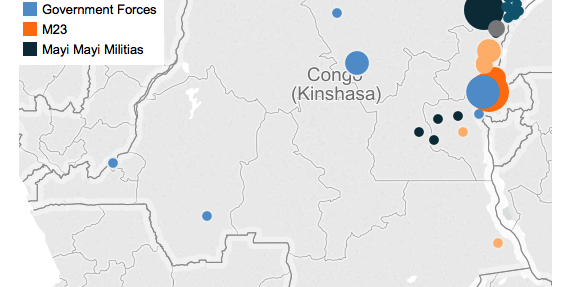 Sexual violence (e.g. rape) is a conscious strategy frequently employed by armed groups to torture and humiliate opponents, terrify individuals, destroy societies though inciting flight from a territory, and to reaffirm aggression and brutality, specifically through an expression of domination (Bastick et al., 2007; UN, 2015).
In order to torture opponents, sexual violence can be used to gain control over victims, in an effort to ensure compliance. This can in turn serve to punish or humiliate an enemy.

“When committed against women and girls, sexual violence is often intended to humiliate their families and communities, wherein women and girls are ‘bearers of honour’, and men are shamed for failing to protect ‘their’ women.  It is used as a means of destroying family and community structures, most overtly when armed groups commit public rapes in front of the community, force family members to witness each other’s rape, or even force people to commit acts of sexual violence against their own family members” (Bastick et al., 2007).

Sexual violence, especially when conducted in a large-scale within a specific area, can serve to incite flight from the given territory, especially as terror will be instilled within the local population.  Above all, “rape is not an aggressive expression of sexuality, but a sexual expression of aggression…a manifestation of anger, violence and domination” (Seifert, 1992).  “Sexual violence can serve to affirm aggression and brutality in armed forces and groups,” at times encouraged or tolerated as a ‘morale booster’ or a ‘reward for bravery’ (Bastick et al., 2007).
In addition to its use during times of conflict, sexual violence can have further negative ramifications post-conflict.  “Sexual violence has serious social consequences for survivors, their families and communities. In most (if not all) societies, the victims are severely stigmatized” (Bastick et al., 2007).  During peace processes, especially when amnesty is granted to former combatants, “impunity for acts of sexual violence committed during the conflict might perpetuate a tolerance of such abuse against women and girls, as a long-lasting legacy of conflict” (Bastick et al., 2007).
By searching for conflict events within the ACLED dataset related to rape, one can identify   situations where sexual violence is used. However, given the stigma that can be associated with being a survivor of rape, these instances are assumed to be underreported with the number of actual instances being much higher.
DR-Congo is referred to by the UN as the “rape capital of the world” (BBC, 2010) – a result of the prevalence of sexual violence in the country, especially in eastern DR-Congo (Washington Post, 2007) (see Figure 1).  Research from the American Journal of Public Health says that a total of 12% of the female population of DR-Congo has been raped at least once (Peterman, Palermo, and Bredenkamp, 2011).  The Congolese army (FARDC) is a large perpetrator of this offense, responsible for numerous instances of rape as a weapon of violence.  Human Rights Watch (2009) states,

“FARDC soldiers have committed gang rapes, rapes leading to injury and death, and abductions of girls and women. Their crimes are serious violations of international humanitarian law. Commanders have frequently failed to stop sexual violence and may themselves be guilty of war crimes or crimes against humanity as a consequence.”

Rape is used by the army to affirm aggression and brutality, especially when used as a ‘morale booster’ or as a reward.  Soldiers are told to ‘go and rape women’ by commanders, and report ‘feeling free’ after the deed (The Independent, 2014); given the impunity enjoyed by perpetrators, soldiers can continue to reaffirm dominance through the use of this tactic (Human Rights Watch, 2014).  “Sexual violence in conflict is used by the military as a way of weakening opposition;” instances of rape in which objects (e.g., sticks, bottles, rifle butts, bayonets) are used are especially about “an experience of horror and power,” used to humiliate opposition (The Independent, 2014).

Based on ACLED data, the M23 and the FDLR groups in DR-Congo are the primary rebel instigators of rape as a weapon of political conflict. The M23 was a militant rebel group formed as a mutiny of armed Congolese forces in 2012, which may suggest why this group capitalizes on a similar tactic of violence. Numerous instances of rape involving the group are reported in 2012.  This violent tactic may hence be an expression of domination in an effort to gain notoriety, especially in the nascent stages of the movement.  The FDLR, meanwhile, exhibits numerous instances of this politically violent tactic in 2014.  Johnson and Schlindwein (2014) suggest that these instances are largely “punitive operations”, enacted to exact revenge and to humiliate their opponent. Though the UN has plans to support a military operation against the group, doubts were raised last month given that DR-Congo named a general accused of rape to head the offensive (Reuters, 2015), suggesting that a focus on targeting perpetrators of rape may not end up at the forefront of the operation.
Mayi Mayi militias – multiple community-based militias found in Eastern DR-Congo – often use rape as a violent tactic to incite flight from a territory.  In a USIP report in which Mayi Mayi soldiers were interviewed, Kelly (2010) suggests that these groups cite rape as motivation to fight, and may see civilians as a resource that can be exploited.
In recent years, there has been a growing trend in the use of rape as a weapon of war in Sudan, especially in the Darfur region (see Figure 2).  These acts are largely perpetrated by political militias (e.g., pro-government militias, the Rapid Support Forces, the Janjaweed). Rape as a form of political violence is confined almost exclusively to Darfur, and this tactic is used primarily as a means of instilling terror in individuals in the region.  In recent years, internally displaced persons and refugees are at an increasingly high risk of being targeted.  The Sudanese military is also responsible for the use of this tactic.  Earlier this month, Human Rights Watch (2015) reported that at least 221 women and girls were raped in the north Darfur town of Tabit in a 36-hour period last October.  “Tabit is largely ethnic Fur and has been under the control of rebel armed groups in recent years” (Human Rights Watch, 2015) so the events were likely a result of seeking to punish and weaken opposition.

Since 2013, the use of rape in conflict situations in the Central African Republic and South Sudan has been markedly high.  2014 was an especially dangerous year for individuals with higher than average reported instances of rape being used as a weapon of political violence. In CAR during 2013, most instances were attributed to the Séléka militia and Séléka rebel coalition. In 2014, the Anti-Balaka as well as the Fulani ethnic militias began to engage in high rates of rape. Continued fighting and displacement have left individuals extremely vulnerable, and recent commitments from governments, UN agencies, and NGOs to prioritize protecting women and girls from sexual violence remain underfunded (IRIN News, 2014), as the crisis in CAR remains largely ignored by the international community (The Guardian, 2013).
South Sudan too has experienced high rates of rape as a weapon of political conflict in recent years, especially at the hands of government and rebel forces.  The UN’s envoy for sexual violence in conflict (Zainab Bangura) recently said she has not witnessed a situation worse than South Sudan in her 30 years’ experience, citing impunity as a main reason for the extreme sexual violence in the region (Huffington Post, 2015) and drawing comparisons with Liberia, Somalia, Sierra Leone, the Democratic Republic of Congo, the Central African Republic, and Bosnia, where “women’s bodies were weapons in the frontlines of conflict.” The UN reports that victims as young as two have been raped in South Sudan (Reuters, 2014) in what can only be viewed as an effort to punish and humiliate one’s enemy within a civil war setting.  Numerous instances of sexual violence in ethnically-motivated attacks against ethnic Dinka, Nuer, and other communities have been reported (Amnesty International, 2014; Human Rights Watch, 2014), likely in efforts to instil terror in populations.
Given the ‘effectiveness’ of rape as a weapon of political violence in demoralizing opposition, instilling fear in populations, and reaffirming aggression and domination – and frequent impunity for this crime – no real consequences are faced by perpetrators.  Rape will likely continue to be an effective tactic as long as incentives exist to engage in brutality.

Part 1 of blog posts in this series can be accessed here.