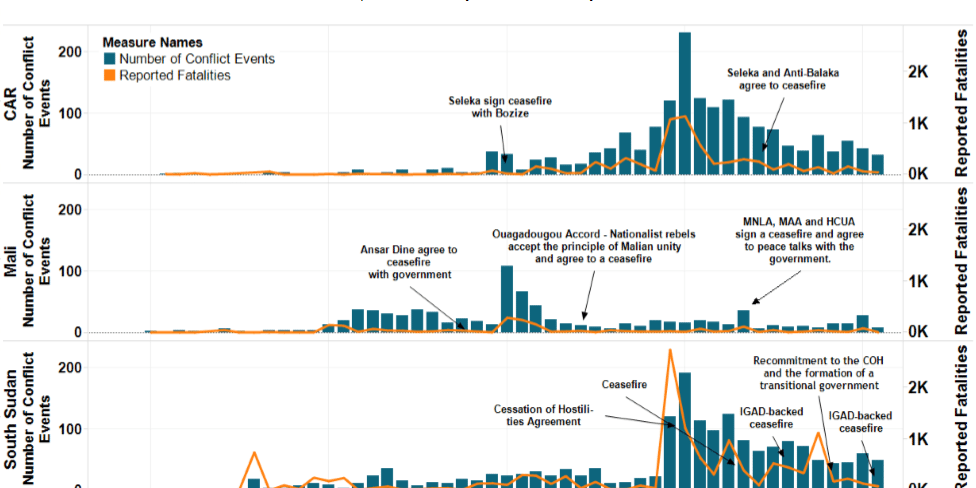 In the past half-decade, multiple peace agreements and ceasefires have been implemented in various African countries to solve ongoing political conflicts on the continent. The most notable examples during this period are Mali, Central African Republic and South Sudan. In spite of direct engagement from the international community as mediators, and often-willing participation in negotiations by the belligerents of the conflict, political violence often endures in these countries.
Some have argued that ceasefires can be detrimental to the political resolution of conflict, as they enable the warring sides to solicit aid and logistics, enabling them to be more militarily effective in the next wave of attacks (Stevenson, 17 February 2014).
Figure 1 shows that while violence is rarely eliminated in the aftermath of a ceasefire, an increase in overall violence is not a foregone conclusion. In Mali, violence spiked after Ansar Dine agreed to a ceasefire agreement with the government in late 2012, only to renege on the agreement in early 2013 (BBC, 12 March 2013). However, this was largely due to the involvement of French forces in dislodging Islamist rebel groups from the area. Furthermore, the nationalist National Movement for the Liberation of Azawad (MNLA) signed ceasefire agreements with the government in June 2013 and May 2014. Although both ceasefires were broken, MNLA activity declined in aggregate terms from 72 conflict events in 2012 to 28 conflict events in 2014. Similarly, while the multiple ceasefire agreements in South Sudan have failed to ensure a lasting peace, neither have they resulted in an overall increase in violence. Instead, violence continues to decrease in the aftermath of a ceasefire before spiking again. Nevertheless, violence is decreasing in the long term. 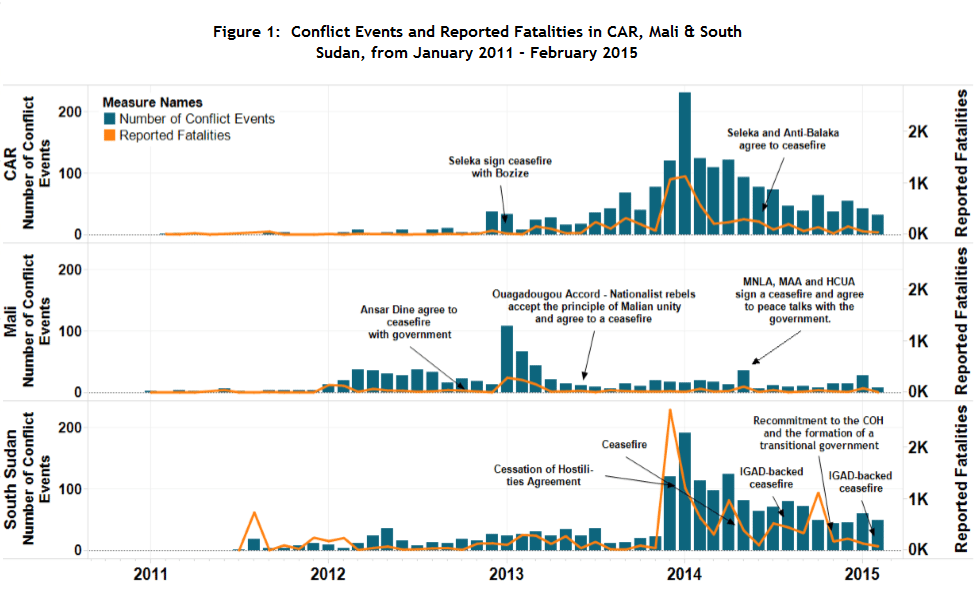 In contrast, the Central African Republic witnessed a huge spike in violence months after the rebel Seleka coalition signed a ceasefire agreement with the incumbent ruler Francois Bozize (VOA, 2013). The rebels accused Bozize of not honouring the agreement and ousted Bozize from Bangui in March 2013. However, levels of violence remained comparatively low in the immediate aftermath of the breaking of the ceasefire, but increased significantly after rebel leader Michel Djotodia dissolved Seleka (BBC News, 25 February 2015).
The highly active Anti-Balaka militia emerged around this time, suggesting that the problem is not related to the failure of the ceasefire but rather the problems faced in demobilising the armed elements of Seleka and the attempts by the Kwa Na Kwa party to regain control.
The need for repeated ceasefires in many African conflicts may be due to the fluctuating bargaining position of each side. Fighting is not determinative, and this provides each side with an incentive to renege on ceasefires and make new demands when its position is comparatively strong.
De Waal (2009) argues that political violence in Africa often serves as a means to bargain their access to political power and economic resources. Mehler (2007) similarly argues that factions will use violence, or the threat of violence, to extract value from the incumbent regime as a type of ‘violence rent’. Through this interpretation, ceasefires and peace agreements can be conceived as a means through which central governments assess the strength of potential challengers and offer rewards accordingly. Figure 2 shows the number of battles by month in Central African Republic and Mali. The events are distinguished by whether there were territorial victors during the time period. If one side acquiring territory is interpreted as a shift in their relative bargaining position, ceasefires may not hold if there is either a decisive shift in territory or continual territorial volatility.

The Seleka coalition, prior to the December 2012 ceasefire, were in a very strong bargaining position. The rebels had ousted government forces from vast swathes of territory and were within 100 kilometres of Bangui. Given this position, the Seleka coalition could confidently restart hostilities when Bozize reportedly failed to adhere to the stipulations of ceasefire (VOA, 2013).
In South Sudan, ceasefires were broken in February 2014, May 2014, July 2014, November 2014 and February 2015. This consistent breaking of agreements has been accompanied by a territorial conflict in which both sides have consistently gained and lost territory. Bentiu, the site of much of South Sudan’s oil reserves, has changed hands between government and opposition forces several times since fighting began (D’Urso, 8 August 2014). This has resulted in the continual fluctuation of each side’s bargaining position. During the Ouagadougou Accords, the nationalist Tuareg rebels accepted that Mali should remain a unitary state. However, after seizing Kidal from the army in May 2014, the rebels began to push for a peace settlement involving federalism and a higher degree of separation between Azawad and the rest of Mali (Africa Confidential, 24 October 2014).
There are additional factors contributing to the fragility of ceasefires and peace agreements in Africa: representatives and leaders of active groups are often unable to exercise complete control over their forces. In Central African Republic, in spite of the ceasefire, Anti-Balaka commanders have not been able to exercise control over their armed followers (African Arguments, 14 August 2014). Similarly, in South Sudan, the violation of ceasefire agreements has been attributed to aligned, but autonomous militias such as the White Army (The Guardian, 12 May 2014). This lack of control extends into the internal politics of these groups. The Seleka coalition is split between two factions, one led by Djotodia and the other led by Zoundecko (AfricanArguments, 14 August 2014). Zoundecko rejected the July ceasefire, arguing that the Seleka signatories had not right to sign on his behalf. The Anti-Balaka is similarly split between a moderate wing open to negotiation and a minority group, aligned with Bozize, which has continued the fight (Welz, 2014). Ceasefires and peace agreements often seek to enforce stasis on situations in which the balance of power is consistently shifting. Because of this, it is likely that ceasefires in these volatile conflicts will continue to be broken.