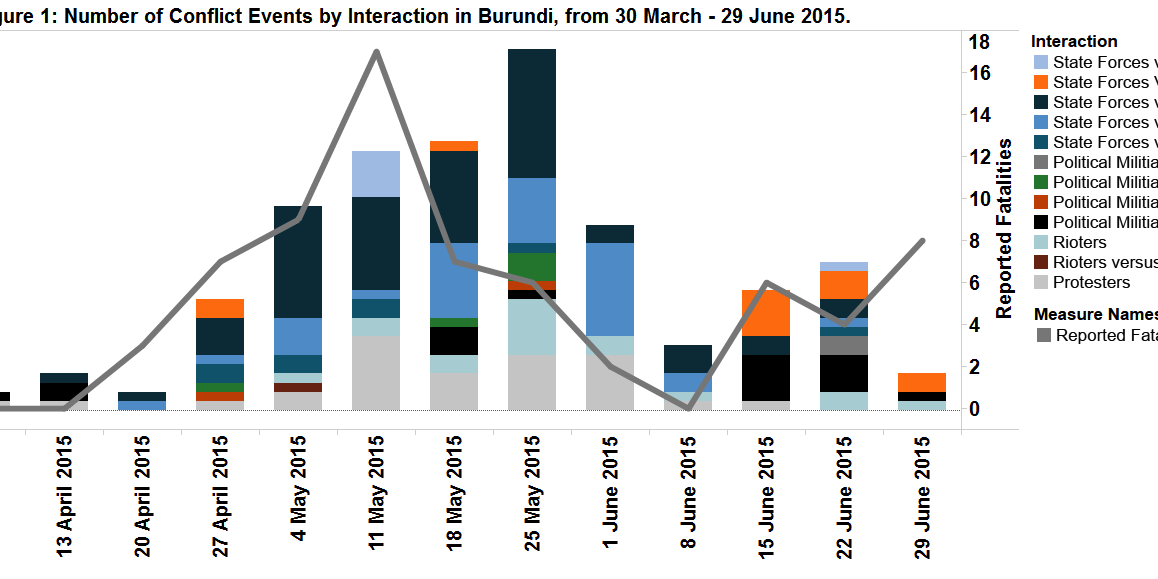 The political crisis in Burundi is entering its 14th week and though aggregate levels of political violence have decreased since May when mass rioting and protests took hold of the capital, the forms of political violence employed by the varying sides of the political divide have become more lethal (see Figure 1). The riots and protests  were sparked by President Nkurunziza’s bid to stand for a third term in office, an act deemed unconstitutional by the political opposition and large segments of the wider population. Riots and protests have largely subsided due to concentrated efforts by the police to subdue dissent in the opposition enclaves of Musaga and Kanyosha within Bujumbura (Africa Confidential, 26 June 2015).

Instead dissent and political violence has taken on a more insurgent character with unidentified groups attacking the police and civilians with grenades and gunfire. As a result, the violence has been at its most lethal since early May when the attempted coup by ex-Chief of the Army Staff Major General Godefroid Niyombare provoked pitched between different factions of the military (Africa Confidential, 14 May 2015).
The length of the political crisis may be responsible for the shift in tactics by anti-Nkurunziza actors. Similar political crises occurred in Burkina Faso and DR-Congo when Presidents Blaise Compaoré and Joseph Kabila both tried to extend their tenure beyond the constitutional limit. However, popular protest in Burkina Faso led to the ousting of Compaoré within two weeks while Kabila was eventually blocked by his own legislature, resolving the political deadlock in under a month (ACLED, 23 June 2015).
Despite National Council for the Defence of Democracy-Forces for the Defence of Democracy (CNDD-FDD) obtaining a ¾ majority in the legislature during the 2010 elections,  Nkurunziza has used purges within the CNDD-FDD, and threats against Supreme Court judges, to ensure that there is no institutional block against his candidacy (The Guardian, 5 May 2015; Africa Confidential, 29 May 2015; Colombo et al., 2014). With both popular demonstrations and institutional protocol proving ineffective, it appears as if the opposition is resorting to insurgent tactics to pressure the government.
However, the death of prominent opposition leaders such as Jean Paul Ngendakumana indicates that it is not only the political opposition engaging in targeted attacks (Hatcher, 28 June 2015).
Another recent dynamic has been the spread of violence outside of the capital, with targeted attacks taking place in Ngozi, Kirundo and Muyinga. This diffusion is likely due to legislative and local elections, which were held on the 29th of June.  Many of the events have involved grenade attacks against polling stations and resulted in the destruction of electoral infrastructure. The opposition have boycotted these elections, but the experience of the ineffectual 2010 boycott may be motivating opposition activists to damage electoral property and make a valid ballot impossible (Al Jazeera, 30 June 2015).