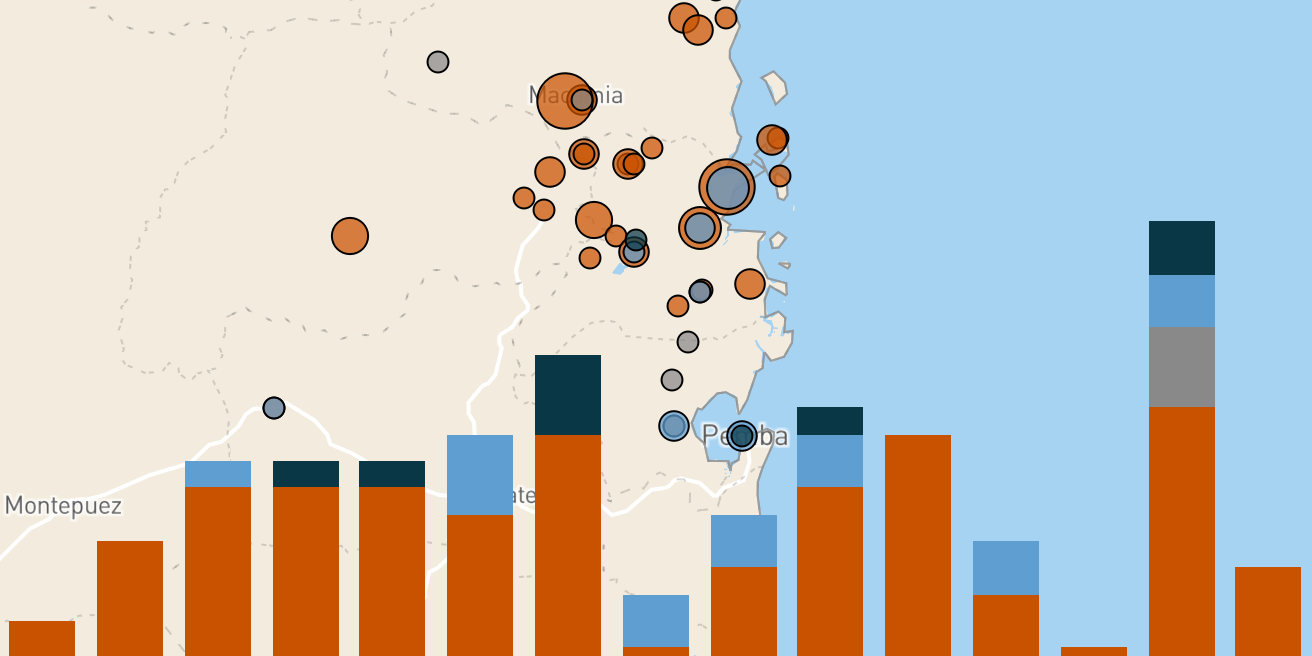 Last week saw a lull in insurgent attacks, with only three attacks reported, none resulting in any civilian fatalities. Insurgents burned homes and a fuel station in Mussomero and Namirumo, both in Quissanga district, on 20 May. Both Mussomero and Namirumo were largely deserted when the attacks took place. In Macomia district, insurgents attacked Koko on the afternoon of 24 May, confiscating food from the village but neither killing civilians nor burning homes.

The lull is not out of character for the conflict, which has often seen periods where insurgents regroup following periods of high activity. There is no indication that the drop in attacks is the result of any particular success on the government’s part, nor of a strategic shift on the part of the insurgents. Instead, the story of the week has been of a slow, continued government advance through Quissanga and Muidumbe districts (see Government Response, below), with insurgents withdrawing ahead of government forces rather than engaging in major combat. In Miangalewa, Muidumbe district, for example, insurgents remained in the town and were playing football with locals as recently as 20 May, but were gone by the time government forces arrived on 22 May. The ease with which insurgents have evaded advancing security forces suggest that they continue to receive good intelligence about government movements.

Insurgent tactics appear unchanged in the attacks that did take place last week, targeting homes and transportation infrastructure and gathering resources for the insurgency. Fears that the insurgents are increasingly targeting Christian religious infrastructure, after insurgents looted a house for Benedictine monks and burned a Catholic hospital under construction in a 12 May attack on Awasse, Mocimboa da Praia district, were dismissed by the bishop of Pemba Dom Luiz Fernando Lisboa, who pointed out that the Awasse attack also targeted other buildings near the monks’ home. The Islamic State certainly emphasizes attacks against Christians in its messaging, but there is little to suggest that this emphasis is driving insurgent targeting decisions on the ground.

Last week saw two developments that shed new light on — and raised new questions about — the role that non-Mozambican organizations and individuals play in the Cabo Delgado insurgency. First, two girls who had been kidnapped by insurgents from Ulo, Mocimboa da Praia district, escaped the insurgency and gave an interview upon reaching Mocimboa da Praia (Zitamar News, 19 May 2020). The girls spoke of being held in a large insurgent base under dense tree cover on the Messalo River, and claimed that fighters there were from a range of nationalities — although they did not specify what countries they were from outside of Mozambique. Their report dovetails interestingly with the report of another woman who escaped from insurgent captivity in Macomia district and gave an interview with Pinnacle News saying that insurgents she was with spoke a range of languages spoken in Mozambique (Pinnacle News, 21 May 2020), including languages prominent in the north such as Kimacua, Kiswahili, and Kimwani as well as Changana, which is primarily spoken in the south, but no language more “foreign” than Kiswahili. The reports suggest that the insurgency is fairly diverse in terms of area of origin and that the insurgency’s foreign fighters might be based together, rather than distributed among insurgent units. Further data on the makeup of the insurgency comes from the Mozambican attorney general Beatriz Buchili, who told Parliament last week that, of the 60 accused insurgents her department is keeping in pre-trial detention, 50 are Mozambican, six Tanzanian, two Somali, and two Kenyan (Jornal Noticias, 20 May 2020).

Second, Al Qaeda suddenly took an interest in Mozambique, acknowledging an attack on “Mokimboua” (likely Mocimboa da Praia) at the beginning of Ramadan on their unofficial al Tabhat media channel. The mention was not a clear claim of responsibility, nor were there any deadly attacks in Mocimboa da Praia district at all within a week of the start of Ramadan, much less one that killed 12 Mozambican security force members as al Tabhat described. It is too early to speculate on how much interest Al Qaeda will take in Cabo Delgado going forward, but it is certainly an aspect of the conflict to watch.

Last week, Mozambican security forces continued their slow advance on towns and villages recently controlled by insurgents. Sources close to the government claimed that security forces overran an insurgent base near Mussomero, Quissanga district, on 21 May. Civilians reported government action on the ground in Muidumbe district, with troops making stops in Miangalewa and Xitaxi before returning to their base at Litamanda.

These actions follow a new pattern of combined arms operations for security forces, in which government infantry is supported by helicopters operated by the South African private military company Dyck Advisory Group. In Quissanga district, civilians reported hearing gunfire and explosions near Cagembe on 19 May, and the next day residents of Tapara and Tororo were warned to remain in their homes to avoid being targeted by helicopters. The pattern repeated in Muidumbe district, with helicopters firing on ground targets near Litamanda and Xitaxi and then soldiers investigating the damage caused afterwards. In Muidumbe, soldiers discovered three abandoned insurgent roadblocks and two dead bodies between Litamanda and Xitaxi, a distance of about 10 kilometers.

These advances have done little to improve civilian life in the conflict zone. Civilian mobility is still very low. The northbound bus terminal in Pemba remains largely empty, with few wishing to travel even to areas now ostensibly under government control, and buses traveling from Macomia now charge $7.25 per person to travel, a huge expense for most local residents. Worse, civilians fleeing the conflict are now being asked to pay local leaders $1.45 for a declaration of residence in order to be legally recognized as refugees (Pinnacle News, 26 May 2020). New measures of the economic toll of the conflict are emerging, including a new report from Mozambican NGO Center for Public Integrity finding that, between 2018 and 2019, tax revenues in Cabo Delgado fell 27.6% (Center for Public Integrity, 24 May 2020). In the same period, social spending in the province was cut in half, while security spending more than quadrupled, making it even harder for the government to meet the province’s dire social needs.

Civilians continue to abandon their homes in droves as a result of the fighting. The government set up five new internally displaced persons centers in southern Cabo Delgado to help accommodate people fleeing the violence, but the centers are already overwhelmed (Zitamar News, 18 May 2020). Built to house 6,000 people, they reportedly currently hold more than 18,000. Those 18,000 are themselves just a fraction of the overall IDP population in Cabo Delgado, which some estimates now put at over 200,000. The IDP centers pose a new problem for the government: protecting the camps. Four of these new centers are in Quissanga district, where attacks have been frequent. Though insurgents have not attacked major IDP camps thus far, they are an inviting target, as they are important government infrastructure, contain food aid ripe for looting, and likely house civilians that the insurgency suspects collaborate with the government.

On a strategic scale, last week saw signs of movement in the government’s recent effort to bring in regional assistance to deal with the insurgency. Mozambican president Filipe Nyusi attended a special meeting of the Troika that leads the Southern African Development Community’s (SADC) Organ on Politics, Defence, and Security on 15 May, which produced a vague but open-ended statement in support of Mozambique’s counterinsurgency goals. South African foreign minister Naledi Pandor confirmed on 22 May that South Africa and Mozambique are in talks over how South Africa can provide assistance in the conflict. The South African military’s 43 Brigade is undertaking a planning effort to conceptualize how the South African military might assist Mozambican security forces, according to sources. 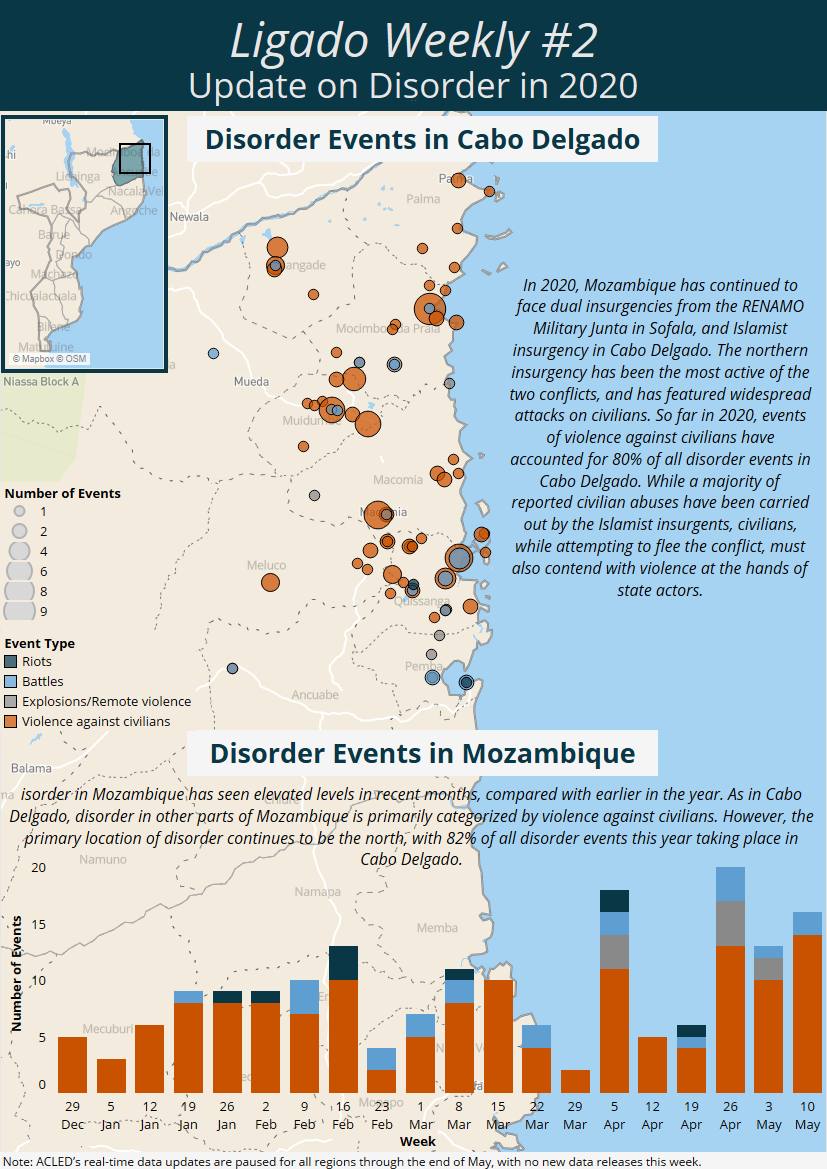