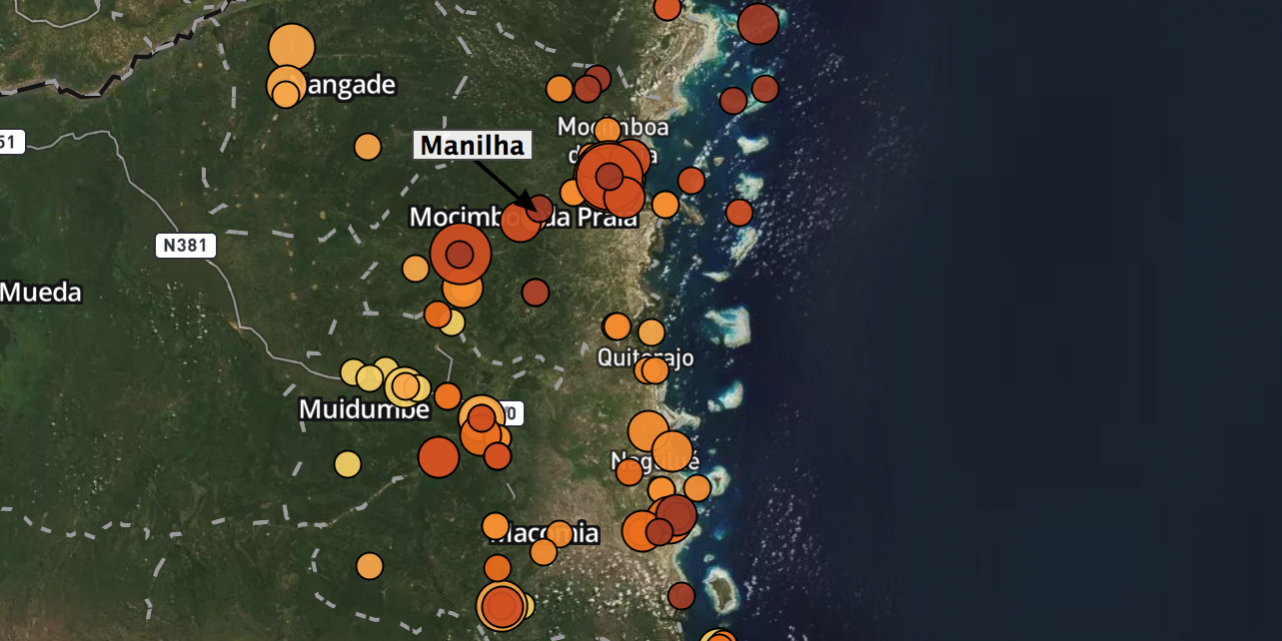 Insurgents in Cabo Delgado were active last week, with 17 insurgency related events reported across three districts in Mozambique’s troubled northeastern province. Little, if any, territory changed hands, but insurgents did seem to strengthen their hold on the area around Mocimboa da Praia town, while at the same time working to cut off Palma town from the rest of the province.

On 7 September, in Rueia, Macomia district, insurgents burned several homes and made off with chickens and goats from the village. The attacks in coastal Macomia district continued on 8 September, when insurgents entered Olumboa in the early evening. The villagers fled into nearby mangroves, but insurgents still managed to injure one villager and kidnap a number of women. The attackers then reportedly burned 72 homes in the village, leaving just three standing, and stole three dhows. That night, insurgents also arrived in nearby Nambo, temporarily capturing two local government officials. The officials were able to get away when an armed man appeared. The insurgents captured and beheaded the man. They then burned many homes, killing a young woman who was sleeping in one of the houses. Government troops engaged the insurgents as they were leaving Nambo, but no casualties were reported.

The next day, 9 September, insurgents again struck nearby, this time at the village of Pamuto. No details are yet available on the Pamuto attack. In Palma district, insurgents entered Ilha Vamize for the second time in five days. Arriving by rowboat, insurgent fighters gathered up local civilians and told them to flee the island. The attackers then burned a number of homes and killed a displaced person who was living on the island after he recognized members of the raiding party. A raid on Ilha Metundo was also reported that day, with homes burned, but no casualties reported.

By 11 September, insurgents were back on Ilha Vamizi, with seven attackers arriving by motorized dhow. There were no injuries in the raid, but insurgents burned about 30 homes and looted a tourist site.

Insurgents were also targeting the western route into Palma on 11 September, adding to the pressure they had already applied to the southern route into the town. That day, insurgents attacked a village near Pundanhar, western Palma district, and ambushed two vehicles on the road. No casualty reports have yet emerged from those attacks. The next day, the shooting near Pundanhar continued, with insurgents holding up three vehicles carrying passengers and goods westbound from Palma towards Mueda. In one ambush, about 30 kilometers west of Palma town, a vehicle was destroyed and two Somali passengers beheaded. In another, closer to Pundanhar, two trucks were forced off the road. A military source told Agence France-Presse that two passengers died and many were injured when one of the trucks hit a tree. The trucks had been traveling without an escort, the source said, because security forces “assumed that the route was safe.” Following the attacks, civilian transport stopped between Palma and points west. Insurgents also continued their attacks on the southern route to Palma on 12 September, injuring two civilians in a raid on Maganja, Palma district. Maganja sits near the tip of the Afungi peninsula, where the French energy major Total’s liquified natural gas project infrastructure is based.

On the afternoon of 13 September, insurgents attacked Ningaia in eastern Macomia district, burning homes and stealing food and other goods. After leaving Ningaia, the insurgent group went to nearby Manica, which they had last raided on 6 September, and stole chickens and cookware.

More information also emerged last week about the fighting between insurgents and government forces at Awasse, Mocimboa da Praia district on 5 September. Military sources told Carta de Mocambique that over 200 government troops headed east on the N380 toward Mocimboa da Praia town were turned back by an insurgent ambush at Awasse. There are still no casualty estimates from the fight, but insurgents did destroy two government vehicles. Given that fighting last week along that section of the N380 took place at Manilha, further east than Awasse, it seems that government troops did regain control of Awasse in the intervening days.

There was a sharp increase in international attention on human rights abuses by government forces in Cabo Delgado last week. On 9 September, Amnesty International released a statement describing five videos and three photographs the organization obtained that show Mozambican troops committing “shocking violence.” The videos and photographs, which the organization has not yet released but have appeared in part on social media,  reportedly show “the attempted beheading, torture and other ill-treatment of prisoners; the dismemberment of alleged opposition fighters; possible extrajudicial executions; and the transport and discarding of a large number of corpses into apparent mass graves.” The perpetrators wear Mozambican security force uniforms, carry standard issue weapons, and speak Portuguese and Shangaan, the most common language in southern Mozambique, leaving little doubt as to their identity.

Despite the evidence, the Mozambican Defence Ministry attempted to deflect blame onto the insurgency, arguing that the videos were a false flag operation by the insurgents to discredit government troops. Amnesty International rejected that interpretation, saying that the visual and audio evidence make it clear that the perpetrators are government soldiers and police. The Defence Ministry statement also falsely accused Amnesty International of ignoring insurgent abuses in the conflict. In fact, the organization has been condemning insurgent human rights abuses going back to June 2018.

Shortly after the Amnesty statement came out, another video depicting horrific violence by government troops appeared. The new video, undated, but plausibly geolocated to Awasse, Mocimboa da Praia district, shows soldiers beating and then shooting to death a naked woman after chasing her down a road. The  government’s response to the video will be covered in full in the next Cabo Ligado weekly report, but so far the Defence Ministry has only said they will investigate the authenticity of the video.

The actions depicted in these videos serve only to isolate government troops, both from the civilians and prisoners who bear the brunt of their abuses and from the international community, which will find it difficult to directly support units with demonstrably poor human rights records. That isolation will likely be a major hindrance for the government in the conflict going forward.

In Macomia town, a sense of normalcy is slowly being restored, even as insurgent attacks continue in the eastern part of the district. The district capital celebrated Victory Day, a Mozambican national holiday, on 7 September. A small group of fewer than 10 public servants laid a wreath to commemorate the day, and the local government hosted a football match. Yet, at the end of the match, signs of the conflict remained in Macomia town. Dignitaries, who had visited for the Victory Day events, returned to Pemba rather than staying in town, and prices for basic goods remained inflated due to the danger to merchants’ supply chains. Elsewhere in the district, things are worse; sources say that Quiterajo is a ghost town that locals consider to be under insurgent control, and raids are still frequent in the Mucojo area on the coast.

Some 800 Mozambican civilians displaced by the conflict, many of them from Mocimboa da Praia, have temporarily settled in the Mtwara region of Tanzania, where the government has made a camp for them in the coastal town of Msimbati. Refugees report being directed to the camp by local authorities after arriving in Tanzania by sea. The camp is not associated with the United Nations High Commissioner for Refugees, but instead seems to be an independent project of the Tanzanian government. The Tanzanian government has not confirmed the existence of the camp. Yet with Tanzania’s recent deployments to the border demonstrating increased interest in controlling cross-border movements, gathering Mozambican refugees in a central, easily monitored location would fit the Magufuli government’s pattern of policy responses to the Cabo Delgado conflict.

For displaced people who fled south instead of north, the Alberto Chipande Foundation is funding a $249,000 infrastructure project in Metuge district to bring improved schooling, health care, and drinking water to the Ngalanga resettlement area. Chipande, a Mozambican independence war hero who famously fired the first shot of the independence war at Chai, Macomia district, is now a major political and financial player in Cabo Delgado. Money from Chipande and other Frelimo figures will likely continue to supplement government outlays dedicated to serving displaced civilians.

Mozambican president Filipe Nyusi met with Patrick Pouyanné, the CEO of Total, on 12 September to discuss the company’s continued investment in Mozambican natural gas. The readout of the meeting reaffirmed Total’s commitment to starting gas production in Cabo Delgado in 2024, a positive sign for Nyusi’s push to bring gas projects online. The Cabo Delgado conflict was not mentioned in the readout, but Total announced separately that it will launch tenders to find companies to supply its Joint Task Force with Mozambican government forces that will be in charge of security for Total’s project.

Around 7 September 2020 (between 6 September – 7 September) members of an Islamist militia attacked Rueia (Macomia, Cabo Delgado). The group caused heavy damage in the village.

On 8 September 2020, members of an Islamist militia attacked Nambo (Macomia, Cabo Delgado). The group set several houses on fire; beheaded a man and burnt another to death.

Around 8 September 2020 (between 7 September – 9 September), members of an Islamist militia attacked the island of Vamizi (Palma, Cabo Delgado). Houses and boats were set on fire. A report indicated that a woman was kidnapped, while other stated that a man was killed. The island currently houses several IPDs.

Around 9 September 2020 (between 8 September – 9 September), members of an Islamist militia attacked Olumbua (Macomia, Cabo Delgado). The group raided and set houses on fire; most of the population had left the village prior to the attack. No reports on injuries and/or fatalities.

On 10 September 2020, members of an Islamist militia attacked the village of Maputo (Palma, Cabo Delgado). The population fled to Muite. No fatalities and/or injuries reported.

On 11 September 2020, members of an Islamist militia attacked a village near Pundanhar (Palma, Cabo Delgado). No fatalities and/or injuries reported.

On 11 September 2020, members of an Islamist militia attacked the island of Vamizi (Palma, Cabo Delgado). Houses, a lodge, and boats were set on fire. The island currently houses several IPDs. No reports on fatalities.

On 12 September 2020, FDS forces clashed with an Islamist militia in Manilha (Mocimboa da Praia, Cabo Delgado) as the security forces were traveling to Mocimboa da Praia. No report on fatalities and/or injuries.

On 12 September 2020, members of an Islamist militia ambushed a vehicle, near the 10 Congresso production facility, close to Palma (Palma, Cabo Delgado). Two people were killed.

On 12 September 2020, members of an Islamist militia opened fire on two vehicles on a road leading to Pundanhar (Palma, Cabo Delgado). A civilian was shot and injured. 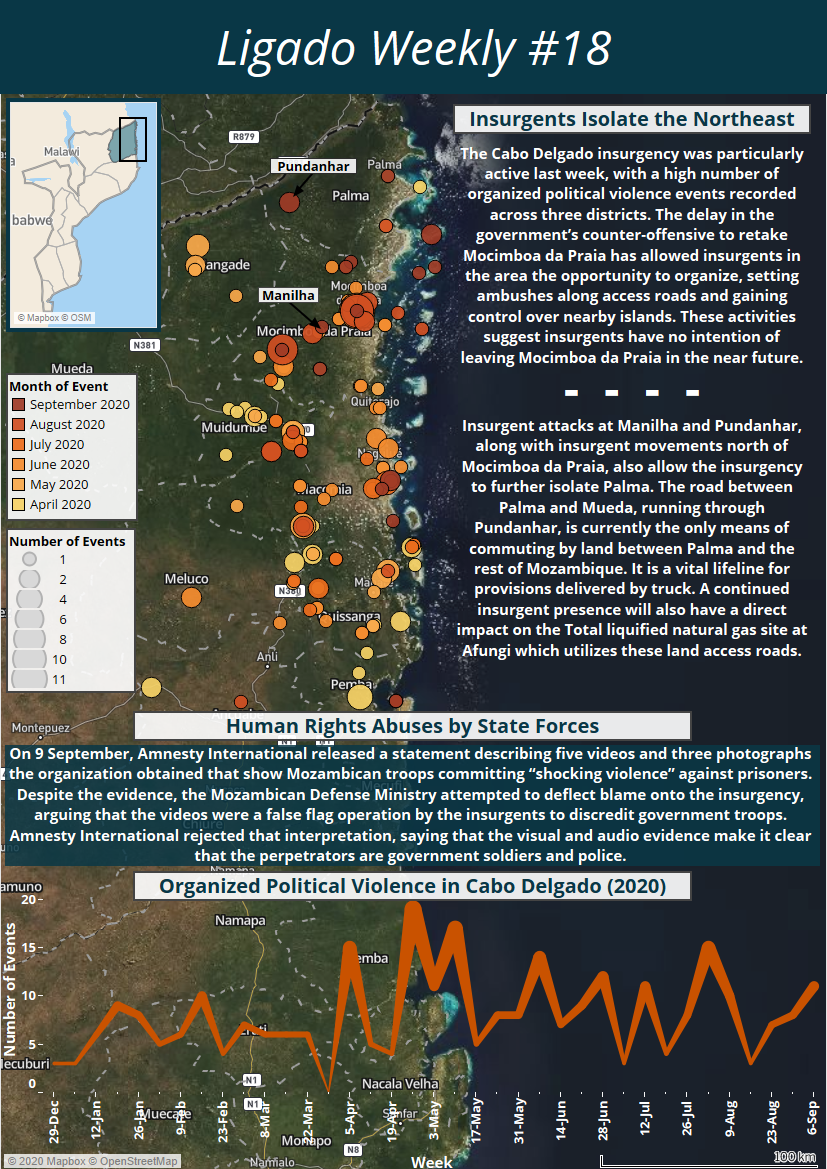