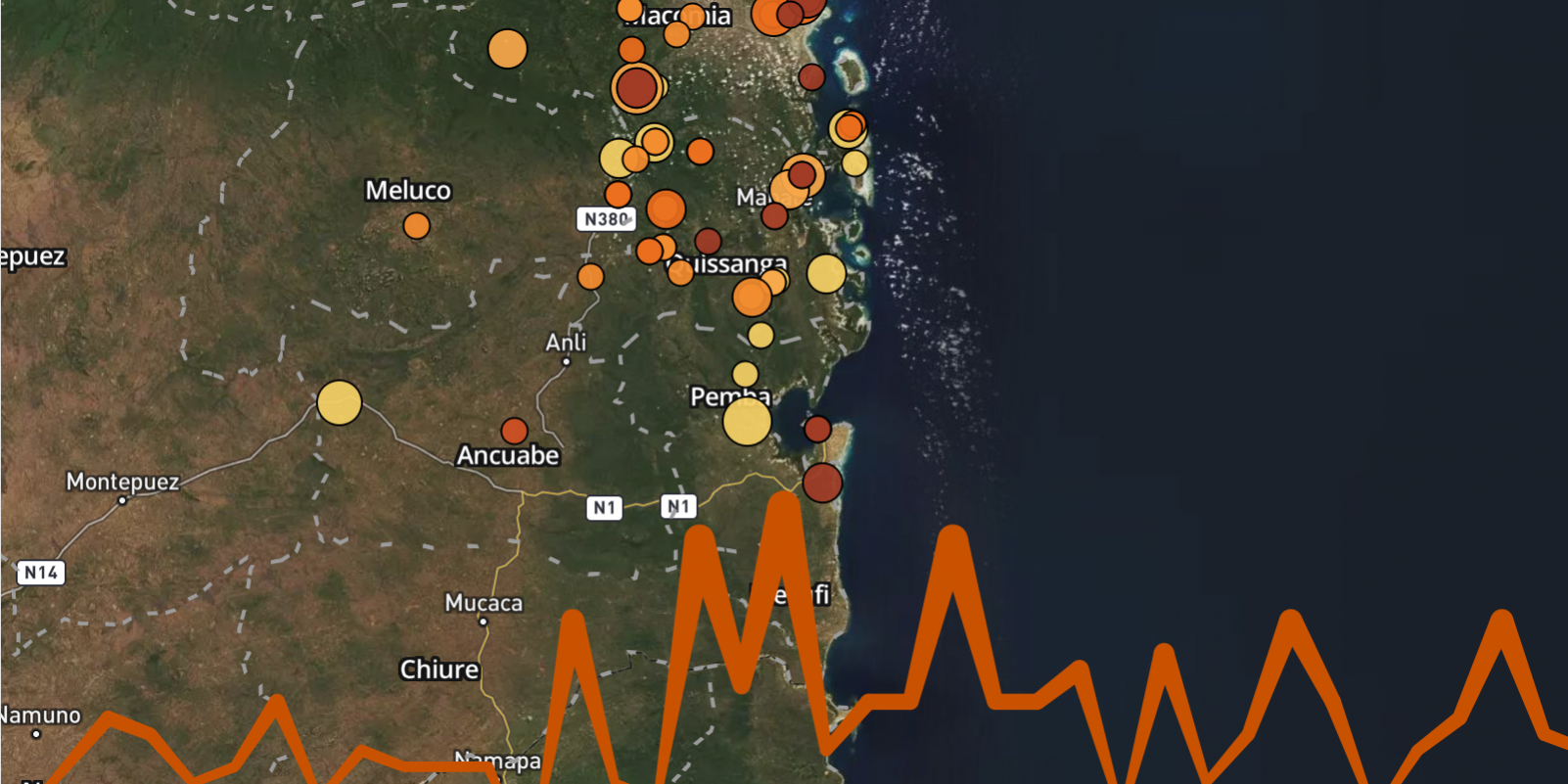 Insurgents once again extended their reach south last week, striking civilians in Quissanga district while also conducting operations in Palma, Mocimboa da Praia, and Macomia districts. Palma town remains under threat of being cut off from the rest of Mozambique as attacks on land routes into the town continue. The Mozambican government, in response to the ongoing violence, has taken its most concrete steps yet toward inviting official international assistance in the conflict.

On 22 September, insurgents beheaded five civilians on the outskirts of Novo Cabo Delgado, Macomia district. The victims had been tending their fields when insurgents set upon them. A local source speculates that the attackers are also responsible for the deaths of two men whose bodies were found near Litamanda, Macomia district on 20 September. There was also an undated report of an attack taking place at some point last week on the village of Chai, Macomia district in which insurgents tortured civilians before sending them to Macomia town to relay a message that government troops should withdraw.

The same day as the Novo Cabo Delgado attack, insurgents resumed attacks on civilians in Quissanga district for the first time since 1 July, striking at Cagembe. Details of that attack and an attack two days later on Bilibiza, also in Quissanga district, can be found below in the Incident Focus section.

On 24 September, insurgents killed a worker for state electrical utility Electricidade de Mocambique (EdM), who was working on an electricity line in Awasse, Mocimboa da Praia district. Attackers also burned an EdM vehicle and forced other employees to run away, abandoning their work.

The same day, farther north, insurgents clashed with government troops outside of Palma town in the village of Naliendele. Reports differ on the number of fatalities from the firefight, with one report claiming that five government soldiers were killed. Another report indicated casualties on both sides, with two Mozambican soldiers killed and another three wounded.

Also in Palma district, more travelers on the road between Palma and Nangade were found dead after a 24 September insurgent attack. Three civilians traveling by motorbike to Pundanhar were waylaid by insurgents on the road and killed. Insurgents also torched another vehicle on the same road that day. The attacks come after traffic on the Palma-Nangade road, which is now the last remaining land route connecting Palma town to the rest of Mozambique, resumed after being halted following other insurgent killings earlier in the month.

The pro-government website Noticias de Defesa issued an unconfirmed claim that government troops killed 19 insurgents in a 23 September operation in Pundanhar, Palma district. According to the website’s account, soldiers disguised themselves as insurgents and infiltrated an insurgent wedding before opening fire.

The 22 September attack on Cagembe, Quissanga district marked the end of a months-long period of relative peace in Quissanga. Since a government offensive there in May, which included the capture of an insurgent base near Cagembe, the rate of insurgent attacks had dropped considerably compared to the first months of 2020. Before last week, the last incidence of insurgent violence against civilians ACLED recorded in the district took place on 1 July.

Despite the ostensibly improved security situation in Quissanga, insurgents entered Cagembe on 22 September and gathered civilians there to accuse them of looting the nearby former insurgent base. They then proceeded to kill two civilians and beat several others.

Two days after the Cagembe attack, on 24 September, insurgents appeared in force in the village of Bilibiza, about 20 kilometers to the south, also in Quissanga district. According to one source, they arrived disguised as Mozambican security forces. In Bilibiza, insurgents held a similar meeting to the one held in Cagembe, accusing locals of stealing from a nearby abandoned base. They demanded people turn over their money and mobile phones and abducted a number of children before directing people to leave the village. Then, they burned down nearly every home in Bilibiza. Casualty reports differ for the attack. Public reports say that eight civilians were killed, though one source put the number at 40.

Bilibiza and the surrounding area had been the site of the government’s signal security success, with the arrival of government troops in May allowing civilians who had been displaced from the area to return to their fields by mid-August. The attack of 24 September is a major reversal for the district. Sources report that 700 people arrived in displaced person camps in Metuge after fleeing Bilibiza last week, leaving their fields and putting both refugee support resources and food production under greater pressure. The Famine Early Warning System already rates Quissanga district as being in a state of food insecurity crisis for the final quarter of 2020.

The attack also calls into question the government’s ability to maintain its security gains. Mozambican president Filipe Nyusi assured the country in a 25 September speech that state security forces had “strongly repelled” an attack on Bilibiza, but this account is not borne out by reports from people on the ground. Instead, it seems that insurgents were able to slip in and out of an area that the government had cleared months ago with no immediate consequences. The only reported government response to the Cagembe and Bilibiza attacks came on 26 September, when helicopters operated by Dyck Advisory Group attacked suspected insurgents near Tanganhangue, Quissanga district, about 20 kilometers east of Cagembe. No information about casualties is available. The threat posed by renewed attacks in Quissanga — and the government’s inability to prevent them — is already being felt outside the district. Some people in Macomia town slept in the bush after hearing news of the Bilibiza attack, fearing an insurgent strike from the south.

The ongoing attacks on the westbound road from Palma town have increased tensions in the town and made life more difficult for civilians there. A curfew remains in place, and civilians are not permitted to be outside after 4pm. Food prices are rising as supplies dwindle, and gasoline prices in the town are now nearly five times the rate set by the Mozambican government. According to multiple sources, some Palma residents have been issued arms as a step to guard against growing security concerns. The reports are not clear as to the source of the weapons, but if they come from the government, then it is a sign that the state is expanding its strategy of arming local militias. The government has so far remained silent on the issue of local militias.

Hardships continue in other conflict-affected areas as well. There were mass blackouts in Nangade and Mueda districts last week, with Nangade going without power for at least six days. A shorter power cut also hit parts of Meluco, Quissanga, Ibo, Macomia, Muidumbe, Mocímboa da Praia, and Palma districts. In Ibo district, a government permit is now required to enter or exit Ibo island, part of an effort to protect residents from the insurgent raids that have been reported on islands further north along the Cabo Delgado coast.

The government had two Cabo Delgado civilians who were arrested for collaborating with the insurgency appear before reporters last week, to recount their experiences of interacting with insurgents. One, a resident of Montepuez, said that he received calls from his brother-in-law asking for information about government troop movements, which he refused to provide. Another, a merchant who traveled frequently between Pemba and Mocimboa da Praia, said that insurgents called and asked him to help identify youth who could be recruited into the group. He claimed to have refused, but admitted to informing his alleged insurgent contact — a Tanzanian citizen — about troop movements in Metuge. Both denied being members of the insurgency themselves.

The public relations gains that the Mozambican police may have made from putting the alleged collaborators on television were undermined by police chief Bernardino Rafael, who admitted in a 26 September press conference that Mozambican forces “are not physically there” in Mocimboa da Praia town. The admission came while Rafael was attempting to deny that insurgents exercise control over Mocimboa da Praia or any other town in Cabo Delgado. Given the price Mozambican security forces paid to try to hold Mocimboa da Praia, the government’s inability to reestablish a presence in the town does suggest that insurgents continue to hold at least a degree of control over the area.

On the international front, the Mozambican government formally requested support from the European Union (EU) to help its counterinsurgency effort in Cabo Delgado. Specifically, the letter requests assistance in the form of counterterrorism training and logistics, technical training, and medical equipment. The letter also appealed for humanitarian assistance for people displaced by the conflict. The government’s letter comes on the heels of a resolution from the European Parliament that urged Mozambique to coordinate an international response to the conflict. Portuguese Foreign Minister Augusto Santos Silva welcomed the letter, saying he is “confident that the EU will respond positively.” He pledged his government’s support for fulfilling Mozambique’s request. Portugal takes over the EU Council presidency in January.

President Nyusi, in his 23 September address to the United Nations General Assembly, stuck to his longtime position that he welcomes international counterterrorism cooperation against transnational threats. He made no mention, however, of the possibility of foreign intervention in Mozambique, and, the EU letter notwithstanding, his government appears to remain opposed to foreign boots on the ground in Cabo Delgado.

However, that reticence does not apply to Mozambican troops receiving foreign training and equipment. A report emerged last week that a South African company has been supplying both in the form of three attack helicopters, four mine resistant armored vehicles, and training programs at farms in South Africa. The report, which is unconfirmed, did not include the name of the company, but did say that the contract it is operating under was signed at the company’s offices in the United Arab Emirates, perhaps in an attempt to keep the deal quiet.

On 20 September 2020, two bodies were found near Litandacua (Macomia, Cabo Delgado). They were allegedly killed by insurgents.

On 24 September 2020, an employee of an energy company was killed by insurgents in Awasse (Mocimboa da Praia, Cabo Delgado), while working on an energy line with other colleagues, who escaped the attack. The attackers set a vehicle on fire.

On 24 September 2020, insurgents clashed with FDS forces in Bilibiza (Quissanga, Cabo Delgado). The group reportedly beheaded five civilians and kidnapped 200 people, the majority women. They destroyed houses and other properties in the city.

On 24 September 2020, two people were killed by insurgents at the entrance to Pundanhar (Palma, Cabo Delgado). The group also set a car on fire.

On 26 September 2020, clashes between insurgents and FDS forces, with support from DAG, were registered in mangroves between Quissanga (Quissanga, Cabo Delgado) and Tandanhague leading to Quirimba and Ibo islands. The group reportedly shot at four helicopters and a plane, with unverified references to rocket launchers being used. No reports of injuries or fatalities. 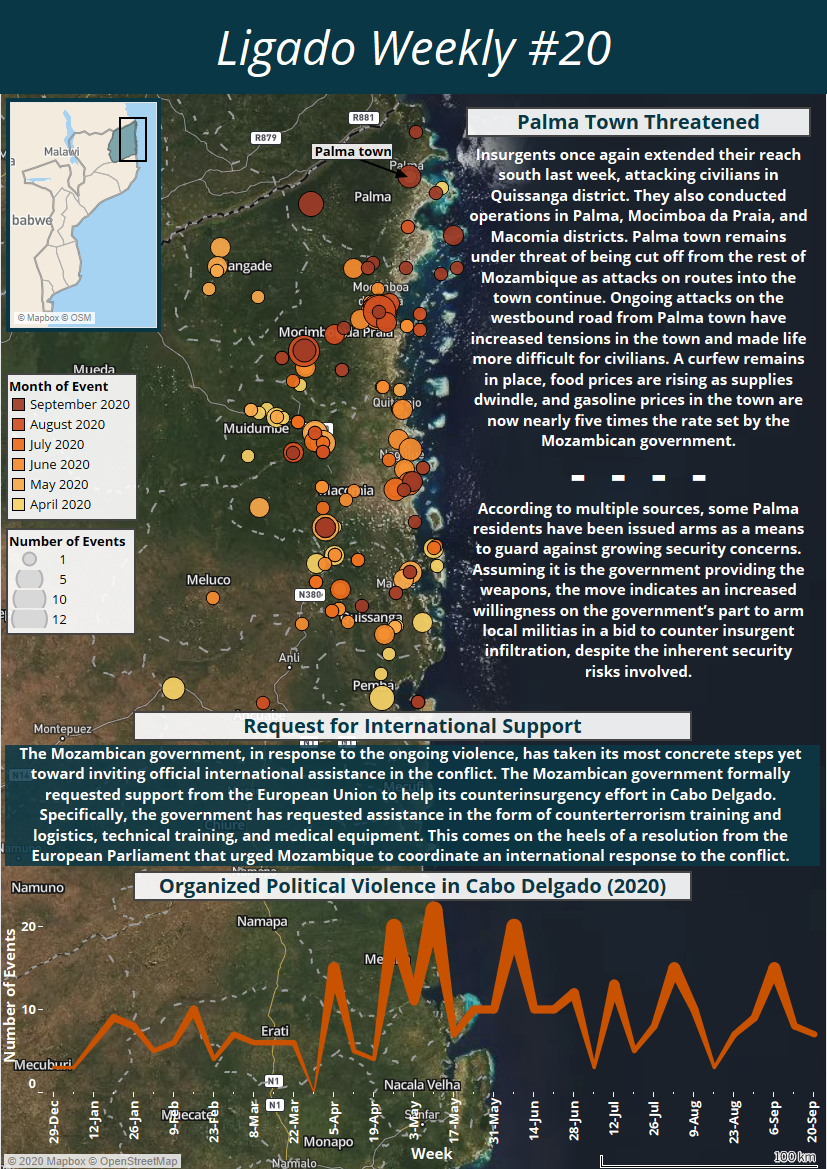 ACLED is the highest quality and most widely used real-time data and analysis source on political violence and demonstrations around the world. Practitioners, researchers, and governments depend on ACLED for the latest reliable information on current conflict and disorder patterns.
29 September 2020
Share
TweetShare on Twitter Share on FacebookShare on Facebook Share on LinkedInShare on LinkedIn