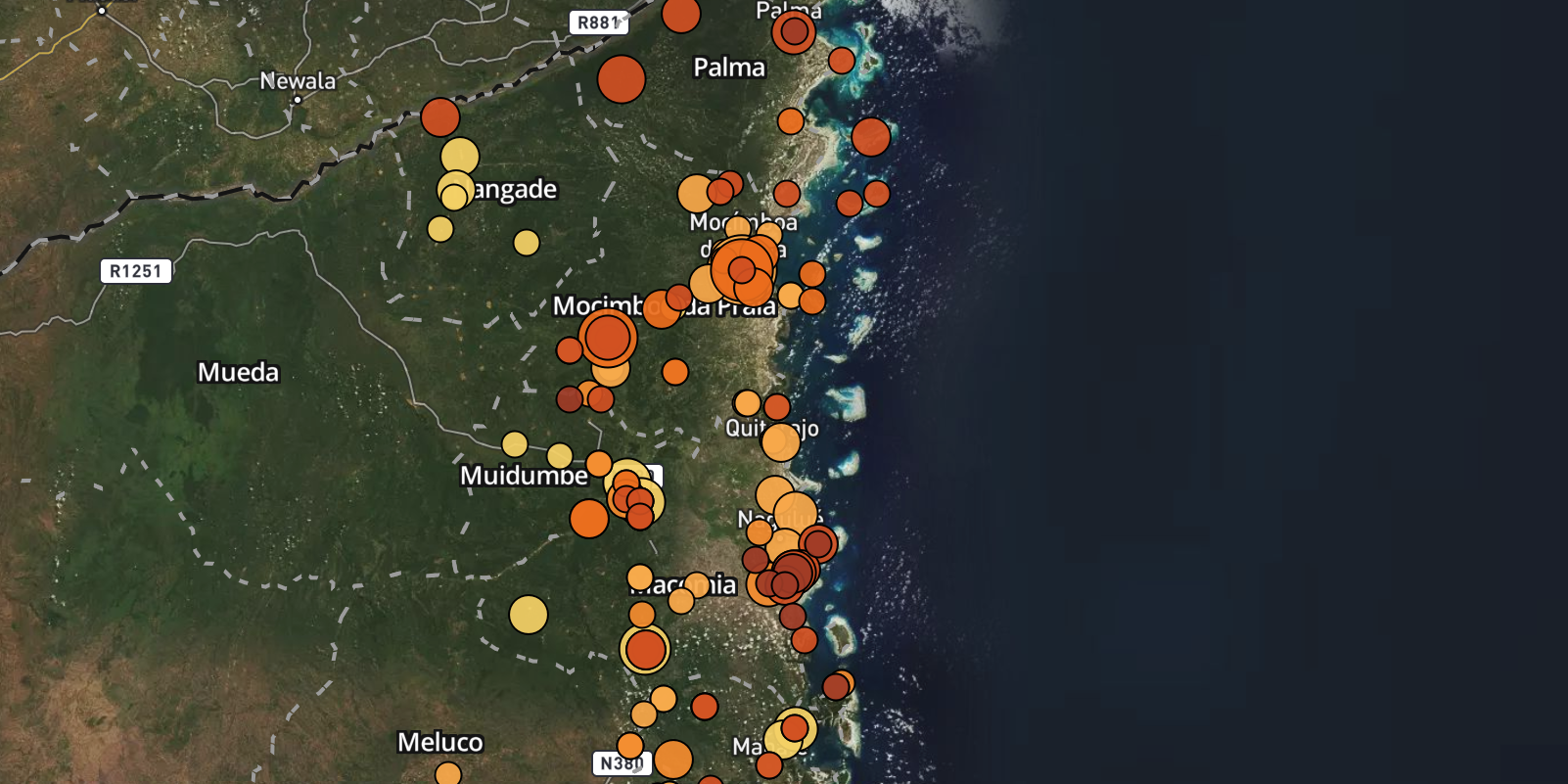 The Cabo Delgado insurgency largely remained within its areas of control in the last week, leading to a dramatic reduction in the frequency of insurgent attacks. The only insurgent attack reported last week in Cabo Delgado was in Mucojo, Macomia district on 11 October. After traveling through the surrounding villages of Guludo, Naunde, and Olumboa, insurgents entered Mucojo town, where they killed two civilians and stole dried fish and salt. As Cabo Delgado enters its lean season, when food production is scarce, these kinds of food-gathering attacks will likely become more common even as the frequency of attacks fluctuates.

The Mucojo attack followed reports on 9 October that insurgents had established several roadblocks along the route between Mucojo and Macomia town. Civilians fleeing Naunde for Macomia said that they passed barricades made of tree trunks ten separate times between Mucojo and their destination. The civilians also complained that government troops in Macomia were more interested in preventing them from entering the district capital than in going to protect Mucojo and other settlements in the eastern half of the district.

Otherwise, it was largely Mozambican security forces doing the shooting last week. On 5 October,  soldiers found two young men talking on a phone after curfew in Palma town. The young men tried to flee when the soldiers arrived, but the soldiers shot and killed them. Local civilians reported hearing the sound of more gunfire that night as well.

By the early morning of 8 October, a combined force of soldiers, police, and local militias had begun a ratissage operation in Palma town, pulling people from their homes on suspicion of being associated with the insurgency. Some people were returned quickly to their families, but others have not been seen since. The operation is reminiscent of the security services’ approach in Mocimboa da Praia town when the government was last in control there. Frequent, brutal raids there led to many civilians being killed and wounded, and others being forced to flee. In the end, Mocimboa da Praia fell to a concerted insurgent advance anyway.

At the same time the raids were beginning in Palma, Pinnacle News reported that Dyck Advisory Group helicopters were involved in operations against insurgents on unspecified islands off the coast of Cabo Delgado. Pinnacle’s government source said that the operations targeted areas where insurgents had displaced fishing villages, and that insurgents were killed, though the source declined to say how many. According to the source, the government was able to locate the insurgents using signals from cell phones the insurgents stole from civilians during a recent attack in Bilibiza, Quissanga district. Other sources have confirmed the government’s use of cell phone location data to gather intelligence.

New information also came to light last week about earlier incidents. During the 30 September attack on Mucojo town, insurgents targeted the local government barracks, killing at least 10 security service members. Civilians discovered their bodies upon returning to the town. During the occupation of Pangane, Macomia district on the same day, insurgents killed two soldiers and five civilians. During the 3 October insurgent attack on Magaia, Muidumbe district, the local militia that thwarted the attack managed to capture five insurgents.

In response to Mozambique’s official request for assistance in Cabo Delgado, the European Union (EU) last week delivered a letter to the Mozambican government pledging to provide humanitarian and security support in the conflict. The security assistance will be the first official international intervention specifically directed at improving the government’s ability to fight in Cabo Delgado.

Details of what the EU will provide are still to be determined, but the EU ambassador to Mozambique Antonio Sánchez-Benedito Gaspar told reporters that the eventual support package will be  “more aid in terms of training, logistics and medical services for the forces that are fighting terrorism in northern Mozambique.” Gaspar was quick to quash the idea that European troops will be fighting on Cabo Delgado, going as far as to say that “the arrival of European military personnel in the country is not on the agenda.” This suggests that even training operations might take place outside of Mozambique.

The move raises questions about human rights concerns, as many of the Mozambican units currently deployed in Cabo Delgado have been implicated in the killings and abuses of civilians and prisoners. If the EU takes on a major training program for Mozambican security services, it runs the risk of enabling and implicating itself in further abuses. Support to military units that commit human rights abuses with impunity is illegal under United States law, but the EU has no equivalent regulation, which means there is no immediate legal impediment to providing training support. It remains to be seen which EU member states will be involved in supporting Mozambique, and whether their own laws concerning training of human rights abusers, if they exist, will be a stumbling block in executing a support agreement.

In other regions around the world, despite the lack of regulations, the EU has sometimes acted to shield itself from association with abusive military units by conditioning its support on respect for human rights. Some security assistance agreements have stipulated that human rights training must be part of the curriculum, and have included language threatening withdrawal of support if units that have been trained commit abuses. No details of the EU-Mozambique agreement are yet available, but similar stipulations may end up in an eventual deal.

Human rights abuses will likely also be noticeably absent from a parliamentary inquiry into violence in Cabo Delgado and central Mozambique, which is set to be released at the end of the month. Renamo members of parliament, anticipating a report focused exclusively on insurgent atrocities, have demanded another parliamentary inquiry to investigate abuses by government forces. The opposition party tried to launch a similar inquiry in May and were stonewalled by Frelimo. They are hoping that recent video evidence of government abuses will create a groundswell of support for a new investigation.

In other areas, however, the government is more open to new programs to address the conflict. Judge Geraldo Patrício, the judge who has overseen all of the criminal cases brought against prospective insurgents, called for special training for judges dealing with terrorism cases. The cases, he said, are particularly complex and require a different set of skills than those in which most judges are trained. He also said that terrorism cases should not begin with a presumption of innocence for the accused. This is concerning from a human rights perspective and likely reflective of the pressure Mozambican president Filipe Nyusi has put on the judiciary to produce convictions against alleged insurgents. This pressure mounted after Patrício himself acquitted 131 defendants accused of supporting the insurgency for lack of evidence.

The World Bank’s new country director for Mozambique, Idah Pswarayi-Riddihough, chose the day after the three-year anniversary of the start of the Cabo Delgado conflict to release an op-ed stating that, when it comes to the prevention of violent conflict, “prevention is better than the cure.” While the time for prevention may have passed, Pswarayi-Riddihough pledged that the Bank would pursue it anyway, noting that Mozambique is now eligible for an extra $700 million in funding to “address the underlying causes of fragility and conflict.” That money would likely be spent in association with Mozambique’s new Integrated Northern Development Agency (known by its Portuguese acronym ADIN).

Added humanitarian and development spending, however, will come too late for many displaced people living on the islands off the Cabo Delgado coast. After the occupation of Pangane, where a large number of displaced people had been living, many fled to nearby Ilha Matemo. There, with food supplies stretched and sanitation inadequate, diarrhea has once again become a threat. Two people have died from diarrhea in the past week on Ilha Matemo. Pangane, where many of those on Ilha Matemo escaped from, had been the site of a major cholera outbreak until a government public health team was able to land there in early August.

Part of the overcrowding problem on Ilha Matemo stems from the Ibo district government’s decision to prevent displaced people from entering nearby Ibo Island. The officials are concerned that allowing new people onto the island will bring in insurgent infiltrators. The fears follow threats by insurgents to civilians in coastal villages near Mucojo that they will soon attack Matemo and Ibo.

The humanitarian situation in the conflict-affected districts of the mainland is likely no better, however. A Carta de Mocambique report finds that 3,000 people walked from the Mucojo area to Macomia town following the recent attacks. Twelve people died of hunger along the way. The same report cites sources in international aid organizations saying that insurgents have beheaded 14 community leaders, destroyed 25 health centers, and burned 50 schools over the course of the conflict.

Another forthcoming study looks at the humanitarian situation and threat of conflict outside of Cabo Delgado. Researchers from the Institute of Social and Economic Studies presented a preview of their findings last week, based on interviews with people in Cabo Delgado’s neighboring Nampula and Niassa provinces. Though no attacks have taken place in those provinces, the researchers found evidence that insurgents have effective recruiting cells there. Furthermore, the researchers warned, the conditions of a fragile humanitarian situation and weak state infrastructure that helped foster the insurgency in Cabo Delgado also exist to varying extents in Nampula and Niassa. The researchers involved have long pointed to Nampula and Niassa as support areas for the insurgency.

On 5 October 2020, members of the FDS opened fire on two people suspected of being insurgents in Palma (Palma, Cabo Delgado). One of the suspects was killed.

Around 8 October 2020, DAG helicopter attacks against insurgents were reported in the mangrove between Ibo and Quirimba islands (Ibo, Cabo Delgado). According to government sources, an undisclosed number of fighters were killed. 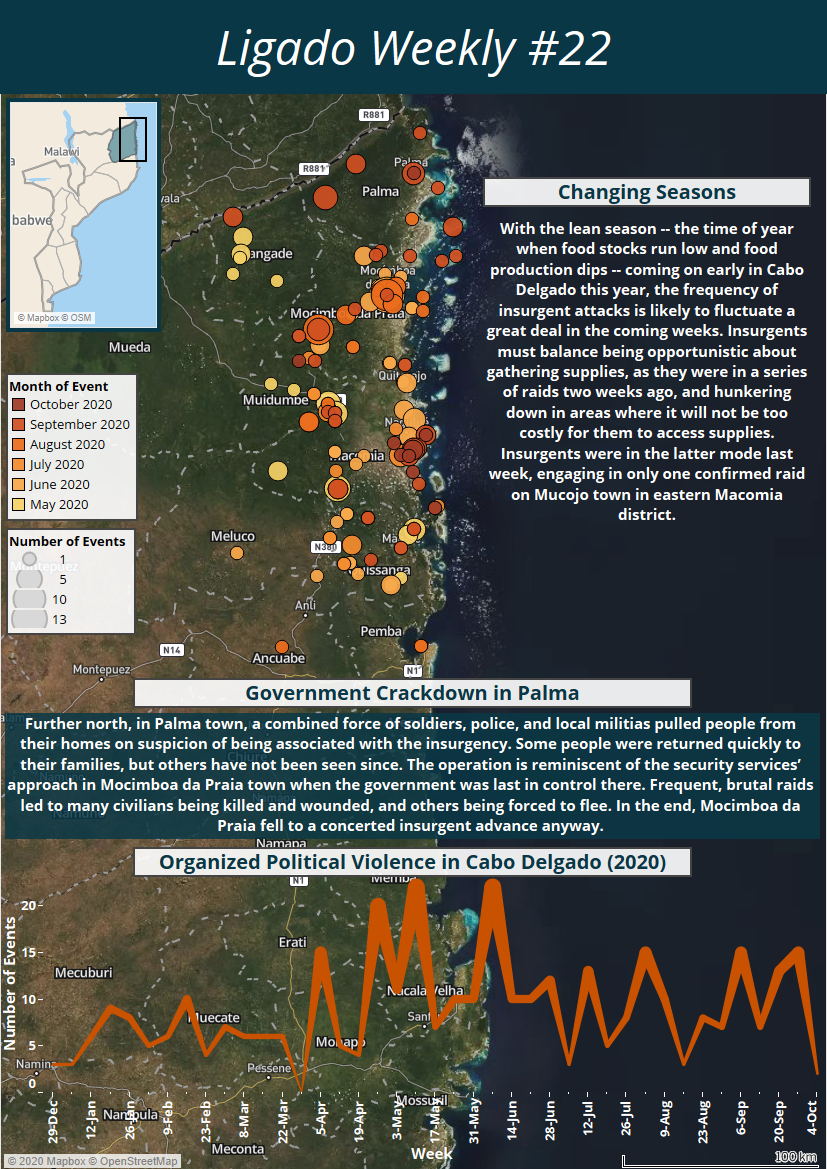 ACLED is the highest quality and most widely used real-time data and analysis source on political violence and demonstrations around the world. Practitioners, researchers, and governments depend on ACLED for the latest reliable information on current conflict and disorder patterns.
13 October 2020
Share
TweetShare on Twitter Share on FacebookShare on Facebook Share on LinkedInShare on LinkedIn