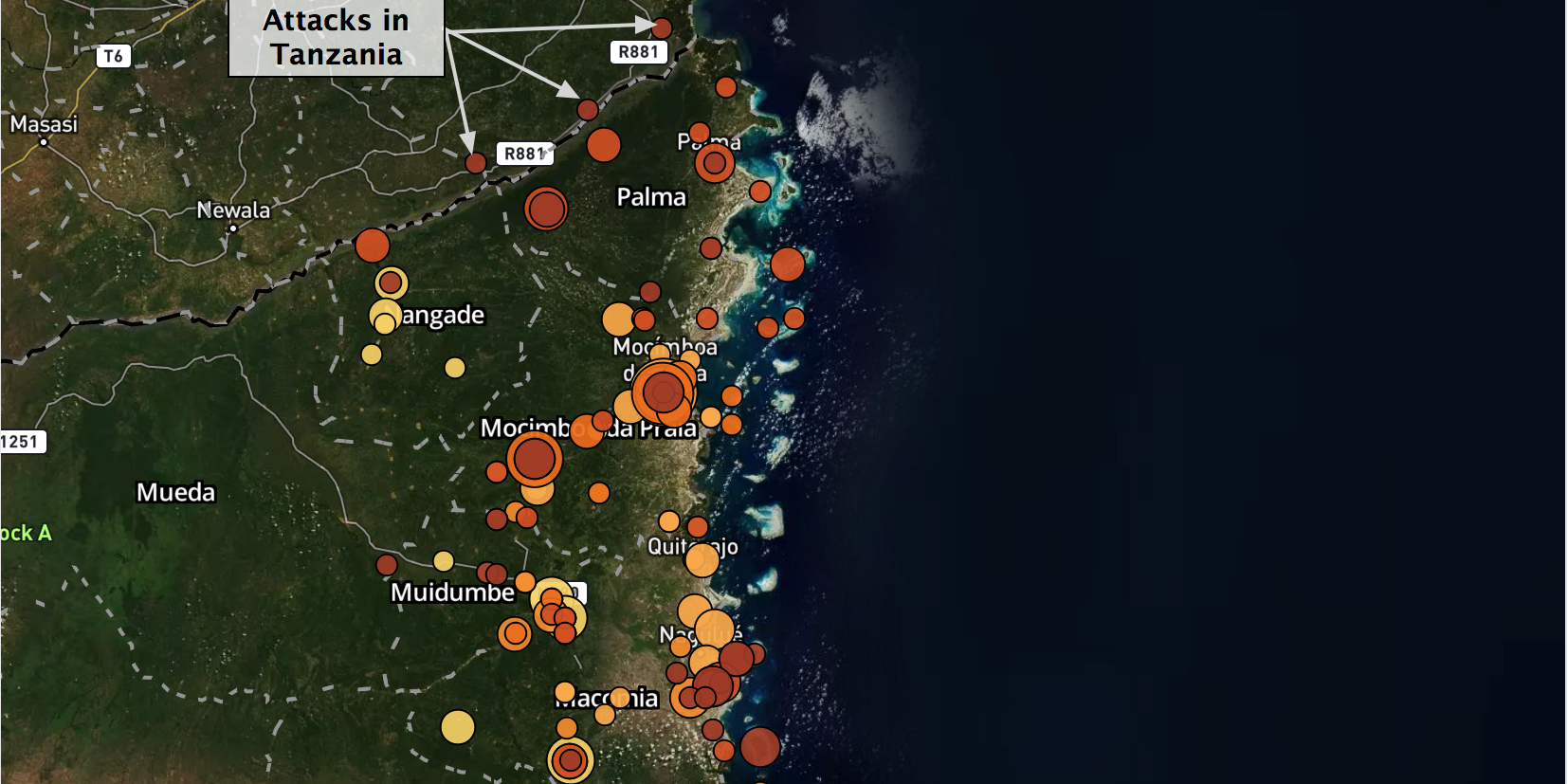 Insurgents returned to Tanzania last week, claiming to have attacked three villages in Mtwara region on 28 October. The raids on Michenjele and Mihambwe, and a third village that may be Nanyamba — all within 20 kilometers of the Rovuma river which forms the border with Nangade district in Mozambique — resulted in a number of buildings burned down and a police station looted. The Islamic State (IS) issued a claim the same day, saying the organization attacked three “Christian villages” in southern Tanzania.

Further south, on 31 October, insurgents attacked seven villages in Muidumbe district: Magaia, Muatide, Nchinga, Miteda, 24 de Marco, Muambula, and the district capital of Namacande. Insurgents decapitated five civilians and kidnapped children in Nchinga. They killed three civilians in Miteda and one in 24 de Março. In Namacande, insurgents burned the homes of local government figures and clashed with Mozambican security forces and local militias during an occupation of the town that lasted into 1 November. Also on 1 November, shots were reported in Namacule, Namande, and Nampanha villages in western Muidumbe district.

IS claimed the Muidumbe attacks as well, releasing a statement on 1 November saying that its fighters had occupied “Muidumbe town” (presumably Namacande, the seat of the district) and defeated a contingent of Mozambican soldiers there. The claim coincided with an order from the administrator of Muidumbe district telling public sector employees in the district to return to work by 1 November. The order claimed the area was now safe again following attacks on the district in April this year.

Insurgents also attacked Pundanhar, Palma district on 31 October. No casualties were reported. The next day, a government patrol ran into an insurgent ambush near Pundanhar that resulted in casualties on both sides, though numbers of fatalities are not yet known.

In addition to the threat of insurgent attack, civilians in Pundanhar had to contend with indiscriminate fire apparently coming from Tanzanian forces last week. On 29 and 30 October, Mozambican civilians reported rockets landing in villages in Nangade and Palma districts, apparently fired from the Tanzanian side of the river. The munitions hit Mandimba village on 29 and 30 October, injuring at least nine civilians, and near Pundanhar on 30 October, where at least three civilians were injured. The Mozambican government has not yet made a public comment on these incidents, but they would represent a serious violation of Mozambican sovereignty if the rockets were fired by Tanzanian government forces. With tensions already high between Mozambique and Tanzania over the handling of the Cabo Delgado insurgency, injuries to Mozambican civilians by Tanzanian security forces — if the reports are accurate — would likely worsen relations between the two countries.

Reports also emerged last week offering new detail on recent insurgent attacks in and around the coastal village of Pangane, Macomia district. Insurgents detained over 200 people in Pangane, before separating children from their parents and taking them towards Quiterajo. Insurgents also conducted a public decapitation and forced locals to attend prayers led by a sheikh who had been captured in an earlier attack. In an attack on Ilha Makalowe, the insurgents preached to local civilians and prayed with their weapons close at hand. Civilians there recognized two insurgents, one from Pangane and one from nearby Quiterajo.

Maintaining road traffic westbound from Palma remains a challenge for government forces. On 27 October, Dyck Advisory Group (DAG) helicopters launched a counter offensive to reopen the road between Palma and Mueda. Civilians have been afraid to travel the route following repeated attacks near Pundanhar, which sits on the road. Whatever progress was made on 27 October was undone on 31 October, when the road was yet again closed after another insurgent attack on Pundanhar. On 1 November, DAG launched renewed air attacks on insurgents in Pundanhar. However, this did not prevent a deadly ambush on a government patrol on the outskirts of Pundanhar the same day.

The road closure poses a problem for Palma civilians. It limits the supplies coming into the town, which drives up prices. It likewise limits civilian mobility, leaving them more at the mercy of government forces garrisoned in the town. Supply prices are particularly sensitive to the safety of the western route because the other two overland routes into the town — to the south coming from Mocimboa da Praia and to the north coming from Tanzania — are effectively blocked for traders. Mocimboa da Praia is still a zone of insurgent control, while the Tanzanian government has banned food exports to Cabo Delgado over concerns that food supplies will end up with the insurgents. The price of fuel in Palma is now 400 meticais (5.48 USD) per litre, compared with around 63 meticais (0.86 USD) in Maputo.

Government forces have stepped up their harassment of civilians, resuming night searches of people’s homes after a short pause. In Palma recently, three people had their phones and money stolen by police special forces personnel during night raids.

To make matters worse for Palma civilians, the power to the town has been out for over a month, and refugees coming into the town from the area around Pundanhar are reportedly being forced to sleep out in the open as heavy summer rains begin.

The mayor of Pemba told reporters that the population of his city has jumped nearly 50% with the arrival of some 95,000 displaced people trying to escape the conflict in Cabo Delgado. Bemoaning how crowded the city has become, he suggested that all future refugees arriving in Pemba will be transferred to Ancuabe or Metuge districts, or to neighboring Nampula province. While this may be the mayor’s preference, there is no evidence of a concerted effort by the government to actually transport new arrivals to housing outside the city. Instead, police are reportedly attempting to ban reporters from photographing new arrivals on the beaches of Pemba’s Paquitequete neighborhood, in order to limit public knowledge of the growing displacement crisis.

The government offered competing narratives about the conflict the refugees are fleeing from last week. Interior Minister Amade Miquidade and Police Chief Bernardino Rafael both claimed that government forces struck an insurgent base in Mocimboa da Praia district that government sources call “Síria,” but they offered different accounts of the results of the operation. Miquidade said that the raid from 26 to 28 October killed 22 insurgents, including some leaders. Rafael, however, said that the operation had run until 29 October and killed 108 insurgents. Rafael also claimed that government forces destroyed 15 cars and trucks, 20 motorcycles, and three tons of food. No photographs or other evidence have emerged to show which account is closer to the truth.

Miquidade also tied the government’s reliance on foreign mercenaries to augment its counterinsurgency capabilities to the demands of natural gas companies. He told parliament that “new economic players have specific security dynamics, and the continuity of these investments requires specialization in means that we do not have.” Emphasizing the linkage between the mercenaries and the security needs of multinational energy companies is a curious political strategy, particularly in the wake of multiple incidents this year in which DAG helicopters have killed Mozambican civilians in operations far from the natural gas projects at Afungi.

Regionally, Zimbabwe’s ruling party ZANU-PF called on the Southern African Development Community (SADC) to invoke its mutual defense pact to allow for direct military intervention in Cabo Delgado. The statement does not appear to be a response to a renewed push for SADC action on the part of the Mozambican government. Indeed, Mozambique seems to have slowed its engagement with SADC since appealing to the European Union for assistance. Instead, in a fit of posturing, ZANU-PF appears to be attempting to leverage the prospect of regional assistance in Mozambique to pressure the United States (US) to lift sanctions against Zimbabwe. ZANU-PF spokesman Patrick Chinamasa, referring to debunked reports that a US diplomat asked Zimbabwe to send troops to Cabo Delgado, told reporters that “the hypocrisy of the US to ask Zimbabwe to assist Mozambique when they have placed sanctions on Zimbabwe is perplexing.”

On 26 October 2020, a sergeant from the Border Guard Unit of the police was killed during an insurgent attack in Pundanhar (Palma, Cabo Delgado).

On 27 October 2020, FDS forces clashed with insurgents in the Syria base, Mocimboa da Praia district (Cabo Delgado). According to the Interior Minister, 22 insurgents were killed during the three-day clash. The FDS destroyed a large amount of food and equipment seized from the base.

On 28 October 2020, FDS forces clashed with insurgents in the Syria base, Mocimboa da Praia district (Cabo Delgado). According to the Interior Minister, 22 insurgents were killed during the three-day clash beginning on 27 October. The FDS destroyed a large amount of food and equipment seized from the base.

On 29 October 2020, FDS forces clashed with insurgents in the Syria base, Mocimboa da Praia district (Cabo Delgado). According to the Interior Minister, 22 insurgents were killed during the three-day clash beginning on 27 October. The FDS destroyed a large amount of food and equipment seized from the base.

On 30 October 2020, 10 people were reportedly injured in Nangade (Nangade, Cabo Delgado) after ‘rockets’ were fired by Tanzanian armed forces in the region.

On 31 October 2020, an insurgent attack was recorded in Miteda (Muidumbe, Cabo Delgado). No reports on injuries and/or fatalities.

On 31 October 2020, insurgents clashed with FDS forces in Muidumbe (Muidumbe, Cabo Delgado). Multiple soldiers were killed or wounded; others were taken as hostages. ISCAP claimed responsibility for the attack.

On 31 October 2020, an insurgent attack was recorded in Namacande (Muidumbe, Cabo Delgado). No reports on injuries and/or fatalities.

On 31 October 2020, an insurgent attack was recorded in Pundanhar (Palma, Cabo Delgado). No reports on injuries and/or fatalities. 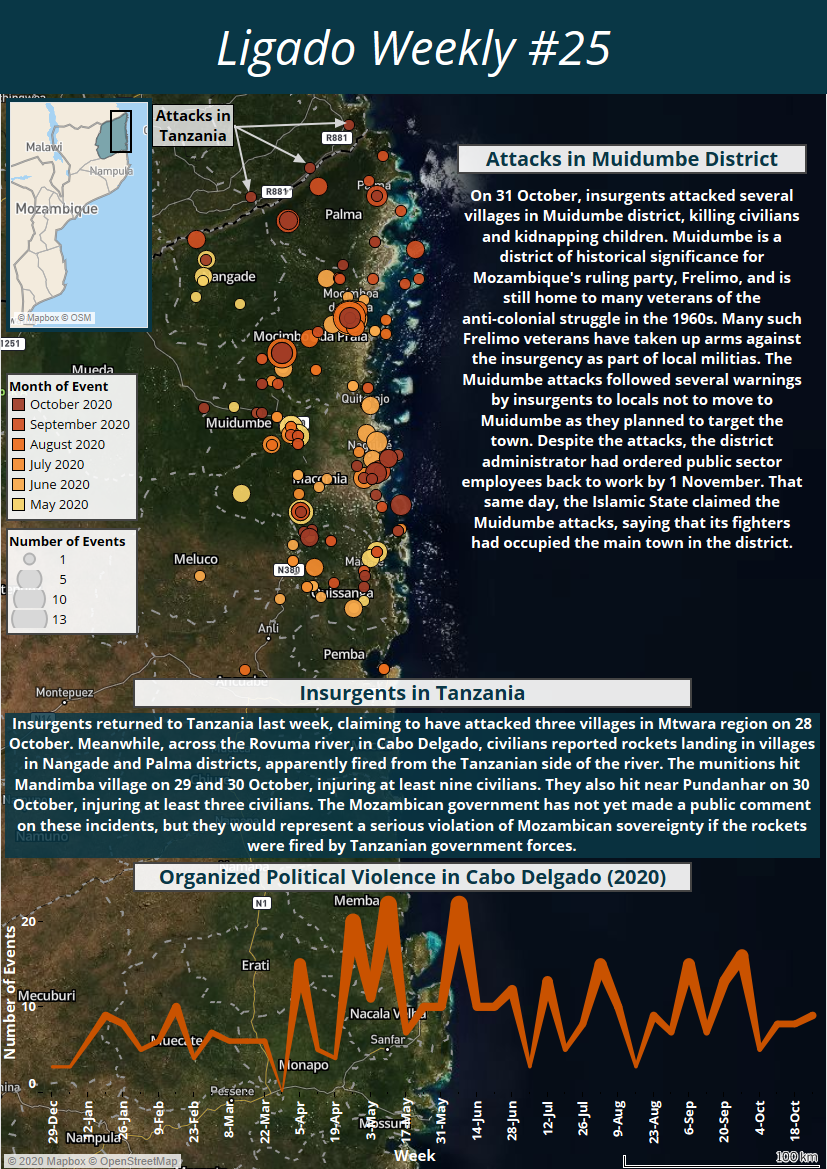