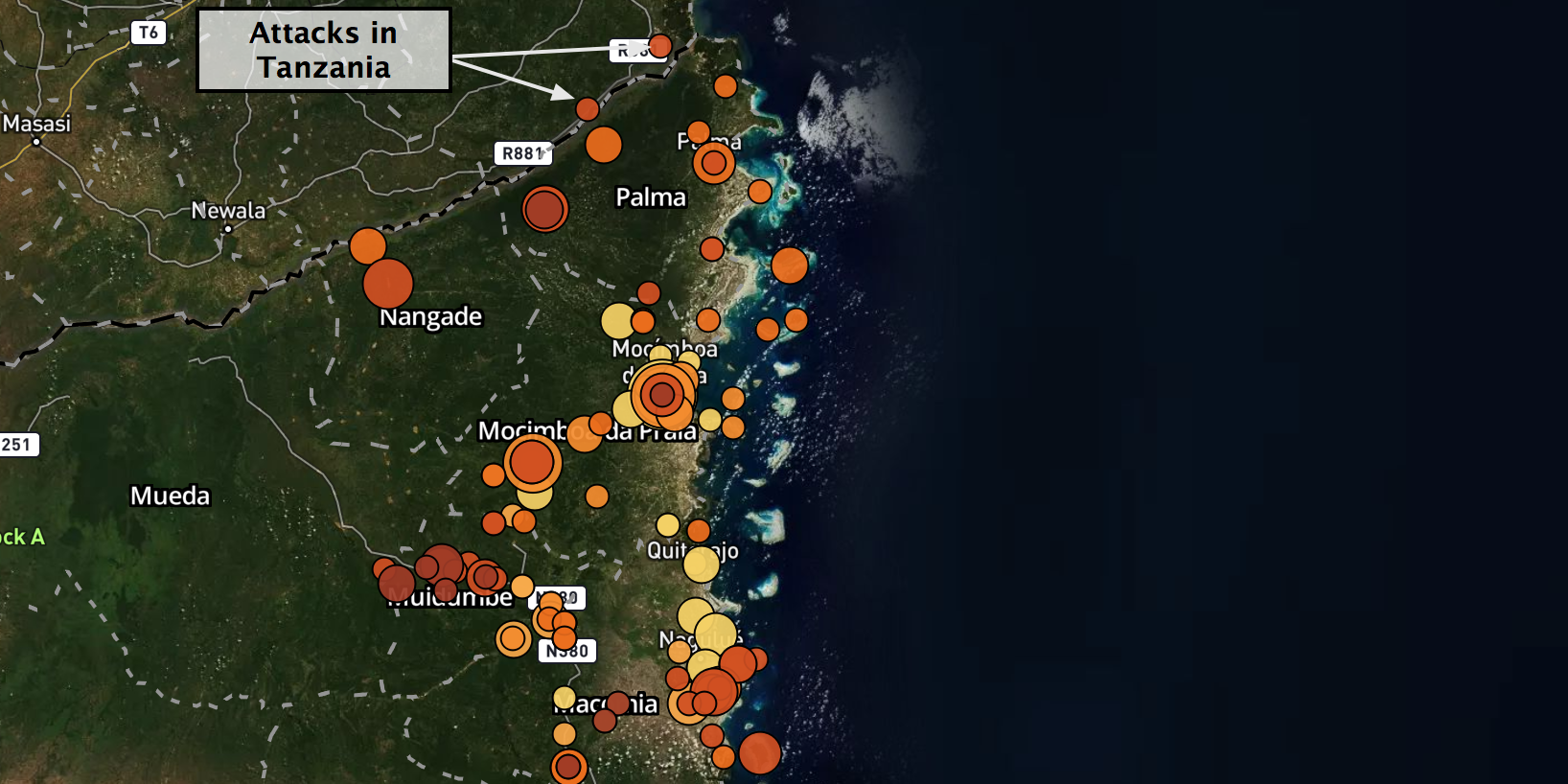 The battle for Muidumbe district continued last week, with three distinct actors involved: government forces, insurgents, and local militias. The militias, which are ostensibly on the government’s side, have sometimes found themselves forced to act in their own interests. Pinnacle News reported that on 10 November, in Matambalale, Muidumbe district, government troops opened fire on a local militia. The militia members did not have uniforms, and the soldiers assumed that the militiamen were insurgents when they took up a defensive position. The Pinnacle report mentioned casualties on both sides, but did not specify how many. It was the second firefight between government and militia forces in Muidumbe this month, following the clash in Lutete on 5 November. Government forces withdrew to Mueda afterwards the Matambalale incident, leaving a weakened militia to defend the village.

The next day, insurgents exploited that weakness, taking control of Matambalale and sending the militia on a retreat toward Mueda. No casualties have been confirmed, but a witness reports that at least one vehicle was burned.

The same day, 11 November, insurgents also occupied Miteda, which is on the same N381 road to Mueda that Matambalale sits on, roughly five kilometers closer to Mueda. No casualty reports from the Miteda attack are available.

No large scale attacks were reported outside of Muidumbe district last week, but tensions still ran high. On 12 November, in Nangade town, businessman Issa Ayubo was killed in his home by unknown gunmen. The assassins are widely thought to be government forces, as Ayubo and other informal traders have frequently been the target of harassment and threats by state security services who believe they fund the insurgency. Many have been arrested and then released after paying their captors, leading many locals to believe that the accusations against the traders are illegitimate. Ayubo himself had previously been the target of such an arrest, and was held for a month under suspicion of supplying food to insurgents, enduring harsh interrogations.

Information about earlier insurgent attacks also came to light last week. On 6 November, insurgents disrupted a funeral in Nturene, southern Palma district. The insurgents fired into the air to announce their presence and then forced mourners to surrender their clothes. The attackers kidnapped two women, including the mother of the deceased.

Seven of the nine community radio journalists who were reported missing following a 31 October attack on their radio station in Nangololo, Muidumbe district have reached safety. Two are still missing, and their colleagues have not heard news of their whereabouts.

More detail has also emerged about alleged mass beheadings at Muatide, Muidumbe district, which took place earlier in the month. The initial Pinnacle News report of the incident, which claimed that insurgents had beheaded well over 50 young people at a soccer field in the village, grabbed global headlines. United Nations Secretary-General Antonio Guterres condemned the massacre, as did French President Emmanuel Macron.

Despite the widespread coverage, details of the massacre remained opaque, with Pinnacle’s report — partially confirmed by Cabo Ligado sources — the only primary account of the incident. This led to skepticism and even denials from figures who should have been well-placed to ascertain the truth of the matter. Dom Fernando Lisboa, the Catholic Bishop of Pemba, acknowledged that there had been attacks in Muatide but said that “whoever makes such a claim [about 50 people beheaded on a soccer pitch] is risking a lot.” Cabo Delgado Governor Valige Tauabo went further, saying that no massacres have happened in the province since the Xitaxi massacre in April. “The government,” he said, “is concerned and with the population.”

Whatever the governor’s sources of information, they were not with the survivors of the massacre who appeared to confirm many of the details of the initial Pinnacle report to Voice of America. The survivors, who escaped to Mueda, told reporters that people were kidnapped from surrounding villages, brought to Muatide, and beheaded on the village soccer pitch. Some of those beheaded were teachers and other government workers, who had returned to the district to comply with the district administrator’s order that government services would resume by early December. The survivors could not offer a definitive answer for how many people were killed in the massacre, but they agreed that it was more than 50.

The beheadings in Muidumbe district, following the earlier Xitaxi massacre also in Muidumbe, confirms that insurgents treat Muidumbe civilians more severely  than they do civilians further east in Cabo Delgado. That could have to do with ethnicity and religion — the population of Muidumbe is both more Makonde and more Christian than other conflict-affected districts, and the Muatide massacre explicitly targeted young men involved in initiation rites as well as government workers — but it could also be the result of political or strategic concerns. Muidumbe residents are more supportive of the government than many civilians on the coast, as demonstrated by the high level of government-backed militia organization in the district. Furthermore, terrorizing Muidumbe and threatening nearby Mueda prevents government forces based in Mueda from leaving the town to put pressure on other insurgent positions in Mocimboa da Praia and Palma districts.

The promised attack has not yet materialized, but the threat has shifted the displacement situation on the western edge of the conflict zone. Thousands of displaced people who had been staying in Meuda — long thought to be relatively safe due to the government military base there — have moved south to Montepuez, joined by those fleeing recent fighting in Muidumbe. The price of a ticket from Mueda to Montepuez has doubled, and the commercial bus service Nagi has suspended service within Mueda district altogether for fear of attacks. A car transporting displaced people from Mueda to Montepuez crashed on 12 November, killing one and injuring several others.

Three commercial banks — Banco Comercial de Moçambique (BCI), Millennium BIM and ABSA — have closed their Mueda branches out of fear that they will be ransacked in the event of an insurgent attack. In Pundanhar, Palma district, which would likely be at the insurgents’ mercy if the military withdrew from Mueda, civilians have abandoned the village and the surrounding area.

Further north, the Mozambican refugees who were recently deported from Tanzania back to a border post on the Mozambican side of the border do not want to leave the border area, fearing for their safety if they are left in an insurgent-threatened region with no protection from Mueda. The government has said it will try to resettle them near the border area.

One of the concerns arising from the Cabo Delgado displacement crisis is that it moves people into areas where malaria is more prevalent. Médecins Sans Frontières head of mission in Mozambique Alain Kassa highlighted the threat to displaced people earlier in the month. A new study, based on data gathered in 2018, shows that malaria prevalence is much higher in the southern districts of Cabo Delgado, where displaced people are largely gathering, than in the northern, coastal districts where they come from. The study predicts that the southern part of the province has an over 80% chance of reaching malaria “hotspot” status, meaning that prevalence of the disease among children under five exceeds 20%. The onset of the rainy season, and the lack of adequate shelter for displaced people, makes this a major short-term risk.

There have been small steps forward in addressing the needs of displaced people. The civilians who had been left stranded on Paquitequete beach in Pemba in October after arriving from the conflict zone have finally been provided shelter after camping on the beach for a month. The government housed some of them in centers for displaced people in Metuge district, while others were brought to family members.

Attempts to further aid displaced populations have been hampered, however, by bureaucratic issues. Some international humanitarian workers have had trouble securing visas to enter Mozambique, which has left aid organizations short staffed.

In Maputo, Mozambique’s Attorney General announced that 12 Iranians who had been previously charged with drug smuggling after their ship, allegedly carrying 1,500 kilograms of heroin, was interdicted off the coast of Cabo Delgado will now also face terrorism charges. In addition to the drugs, the government now alleges the men were transporting AK-47s and other weapons to the insurgency. The Iranians were arrested in December 2019, and the government has made no suggestion that previously unavailable evidence against the men has emerged. It is unclear then why it took nearly a year to charge them if the evidence that they were smuggling guns is allegedly so strong.

On the international front, Zimbabwe’s ruling ZANU-PF party continues to make the case that it can offer assistance to Mozambique in Cabo Delgado in exchange for sanctions relief from the US. Addressing US President-elect Joe Biden by name, ZANU-PF spokesman Patrick Chinamasa said that “the sanctions have made us not intervene [in Cabo Delgado]. We are then asking the United States President-elect Joe Biden to remove the sanctions which he co-authored, if he’s intelligent enough.” Despite previous reports to the contrary, the US has not offered Zimbabwe sanctions relief in exchange for intervention in Cabo Delgado.

Around 10 November 2020, Islamist militia members clashed with prison guards at a prison in Macomia district (Cabo Delgado). No reports on injuries and/or fatalities.

On 10 November 2020, FDS forces clashed with members of an unidentified militia in Matambalale (Muidumbe, Cabo Delgado). No reports on injuries and/or fatalities.

Around 10 November 2020, Islamist militia members clashed with prison guards in the Mienze prison, in the Metuge district (Cabo Delgado). No reports on injuries and/or fatalities.

Around 10 November 2020, Islamist militia members clashed with prison guards in a prison in Mocimboa da Praia district (Cabo Delgado). No reports on injuries and/or fatalities.

On 10 November 2020, a clash between FDS forces and insurgents was reported in Muambula (Muidumbe, Cabo Delgado).

On 10 November 2020, a clash between FDS forces and insurgents was reported in Muatide (Muidumbe, Cabo Delgado). No reports on injuries and/or fatalities. 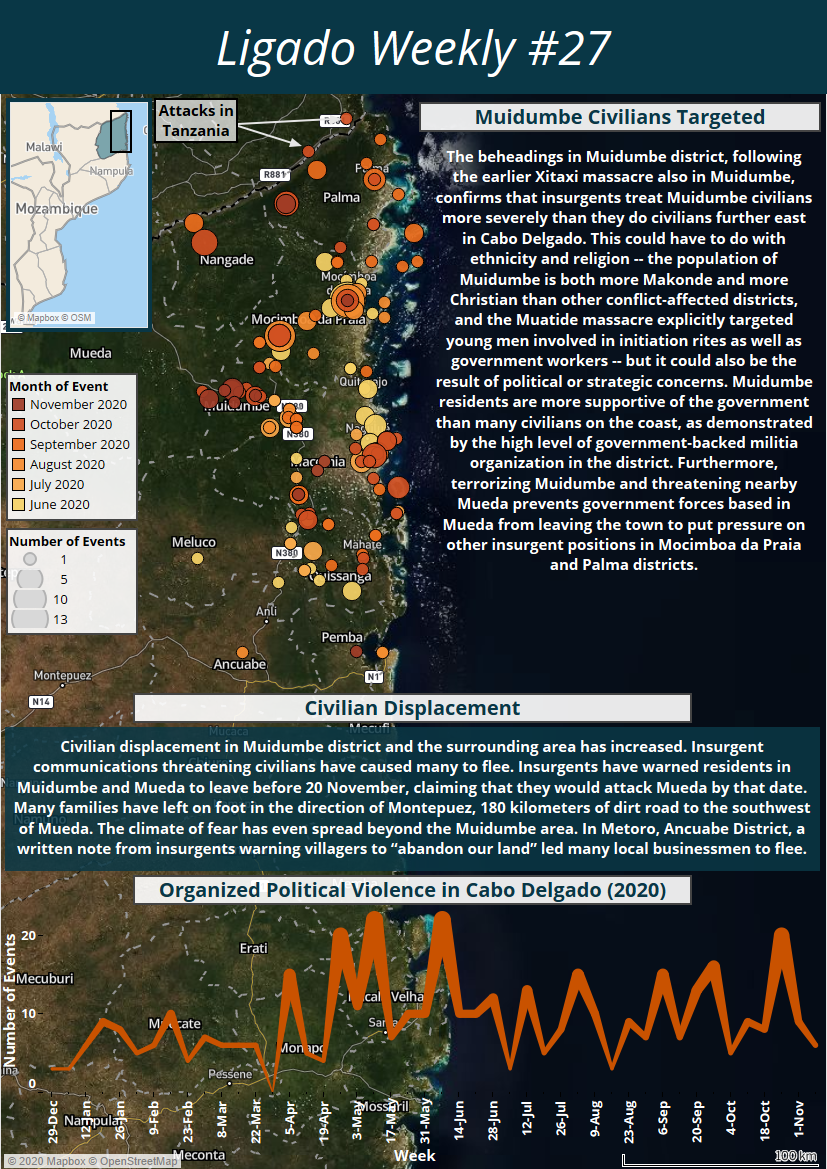