Insurgents in Cabo Delgado rolled back some apparent government progress last week, launching a raid on islands off of Palma and re-entering towns in Muidumbe district that government forces had recently occupied.

On 23 November, insurgents wearing Mozambican security force uniforms arrived by canoe on Ilha Quifuque, Palma District and attacked civilians there. Three civilian deaths were reported, and an unknown number of people were taken captive. The insurgents also attacked sailboats in the waters off Palma and Mocimboa da Praia districts during the raid, capturing at least seven boats and detaining at least 20 passengers. In one of the sailboat captures, reported by Pinnacle News, insurgents confiscated passengers’ cell phones in addition to abducting two people. The sailboats had left Pemba carrying food products north. The captives were taken to Mocimboa da Praia, where one managed to escape. The sailboat captures mark the first instances of sea piracy by the insurgents, and constrain yet another supply route to Palma. It is not clear whether insurgents have the capacity to pursue sea targets larger than sailboats, but the attacks pose a concern for government efforts to maintain human security in Palma. The government has temporarily banned food shipments by sea along the coast for fear of further attacks.

On 26 November, insurgents were back in Namacande, the district capital of Muidumbe, and nearby Muatide. Both towns had been the site of substantial insurgent violence against civilians in recent weeks, and had been re-occupied by government forces in a well-publicized offensive on 19 November. Whatever security gains were made during that offensive seem to have melted away, as insurgents were able to again successfully occupy both towns.

The next day there were clashes between government troops and insurgents in Namacande. No casualty reports are available from the fighting. By 29 November, the fighting had moved northeast to Ntushi, just 10 kilometers west of Mueda. Initial reports from the fighting indicated 18 Mozambican troops had been killed and that government security forces had retreated to Mueda. There has been no indication so far of further insurgent movement on Mueda itself.

In a speech at Mozambique’s Defense Ministry on 25 November, Mozambican President Filipe Nyusi expressed his “concern” that some reporters in the country are “being used to the advantage of the enemies.” Nyusi did not accuse any particular news organizations, but his words echo earlier accusations made by Frelimo allies against Mozambican outlets covering the Cabo Delgado conflict.

Nyusi also used his address to caution soldiers about sharing too much information on social media, where self-inflicted intelligence breaches have become a significant problem for the government’s operational security in Cabo Delgado. However, by conflating Facebook posts by soldiers and reporting by legitimate news sources, Nyusi seemed to suggest that reporters should be treated like soldiers who turn information over to the enemy — harshly. Indeed, Nyusi urged soldiers not to accept being “denigrated, deliberately or passively” by fellow troops or members of the media. Reporter Borges Nhamire — himself no stranger to the challenges of reporting on the Cabo Delgado conflict — said that Nyusi’s comments “give carte blanche to the army and local governments to be repressive with the press.” Given the government’s record on press freedom in the Cabo Delgado conflict up until now — multiple reporters abducted, some tortured, and foreign reporters consistently being denied visas and credentials — the prospect of carte blanche for press repression is worrying.

The comments also come at a crucial time for the legal structures underpinning press freedom in Mozambique. The national press law that was passed in 1991, which allows for independent media in the country, is due to be revised in the near future. At a public event last week, journalists called on the government to delay the revision, saying that it would be a threat to press freedom to change the law in the midst of two armed conflicts in Mozambique. Given Nyusi’s speech and some of the previous legal attempts to constrain the press during the Cabo Delgado conflict, their concerns are well-founded.

There was more worrying news for displaced civilians in Cabo Delgado last week, as the World Food Programme (WFP) declared that it will have to reduce the levels of food aid it has been providing to Cabo Delgado refugees as soon as this week, due to a lack of funding. The international community pledged $96 million to support WFP programming in Cabo Delgado, but the organization has only received $11.7 million of that so far. WFP had hoped to help meet the needs of Cabo Delgado’s growing displaced population by reaching 750,000 beneficiaries in the next year. The United Nations’ International Organization for Migration puts the number of displaced from Cabo Delgado above 469,000, including 45,000 who fled Muidumbe district in the last month. The WFP assistance would have gone to those displaced, as well as the families outside of the conflict zone that host them. The gap in funding is both an immediate concern for displaced people facing food insecurity and an indication of the trouble Mozambique’s Integrated Northern Development Agency may have collecting the $763.6 million in international money it has been promised from various donors, which is meant to fund support for displaced populations and other projects.

Lack of international funding is also hampering natural disaster response planning in Cabo Delgado. Mozambique’s National Institute for Disaster Management has not finished the mapping segment of its flood response plan in Cabo Delgado and other provinces, despite being in the midst of the rainy season. Institute director Luisa Meque promised that the mapping would be finished by this month, but said that her office is still awaiting pledged money from abroad. Flooding could severely restrict movement in Cabo Delgado, both for refugees trying to flee the violence and for government security forces trying to engage the insurgency.

In addition to food insecurity and the threat of flooding, displaced civilians who have escaped the conflict zone to southern Cabo Delgado are also facing a sanitation crisis. Nangua refugee center in Metuge district is now destroyed after a diarrhea outbreak there killed five people and caused a riot. A local leader was murdered in the riot under suspicion that he was responsible for the outbreak. It is unclear how the people who left the camp are now being housed, although one refugee told reporters that returning to the conflict zone was preferable to living in the conditions of the refugee center.

The desperate conditions faced by refugees are also increasing rates of child marriage in Cabo Delgado, according to an international aid organization that works on gender issues. In an effort to secure resources necessary to live, some families are offering girls as young as 11 for marriage. The organization also highlighted the increased risk of gender-based violence for displaced people living in cramped conditions in refugee centers or relatives’ homes.

Province-wide, the conflict and the resulting displacement crisis have largely ground economic activity to a halt, according to Nocif Magaia, the Cabo Delgado director of industry and commerce. Ruby mining, construction, and cashew growing — three major industries in Cabo Delgado — have slowed to a standstill even outside the districts most directly affected by the violence. The lack of licit economic activity, in combination with the growing desperation of many people immiserated by the conflict, will likely make the government’s attempts to control the illicit economy in Cabo Delgado more difficult.

There is some good news for Cabo Delgado civilians, however. Some 200 fishermen from Metuge district who had their equipment destroyed by Cyclone Kenneth in 2019 are now back at sea thanks to assistance from the provincial economic development agency. This should increase the supply of food in a district with a high concentration of refugees. Less concretely, provincial secretary of state Armindo Ngunga promised last week to build 100 new villages for refugees to live in, which would have better facilities than those on offer at the refugee centers. The timeline and budget for the project is unclear, but it is at best a long-term solution to an immediate problem and would certainly rely on outside donor funding to implement.

For refugees who have left Cabo Delgado, prospects are not necessarily much better. Some 815 refugees in Zambezia province are currently without support as they wait for the government to find them plots of land to live on. According to the government, the factor limiting resettlement is a lack of building materials with which to construct shelters for the refugees.

The regional response to the Cabo Delgado conflict remains unclear after the Southern African Development Community (SADC) held an extraordinary summit of its Organ on Politics, Defence and Security Co-operation on 27 November. Neither President Nyusi nor Tanzanian president John Magufuli attended the summit, and the summit communique concluded only that a “comprehensive regional response” to the crisis should be “considered urgently by the Summit.” It is not clear when a plan for such a response will be forthcoming. SADC did, however, release a plan last week for a regional Center to Combat Terrorism, which would act as a coordinating body to produce plans for regional responses to threats from terrorism. The Center plans to be operational by 2021. 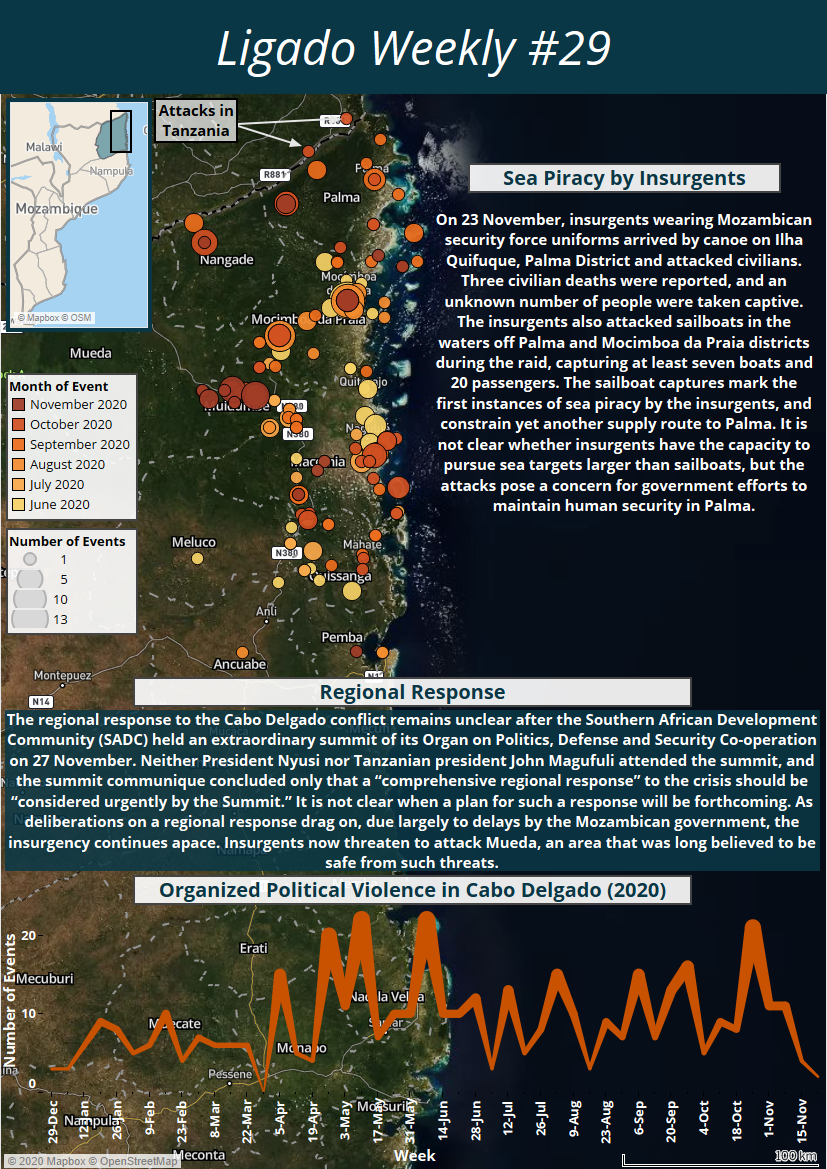