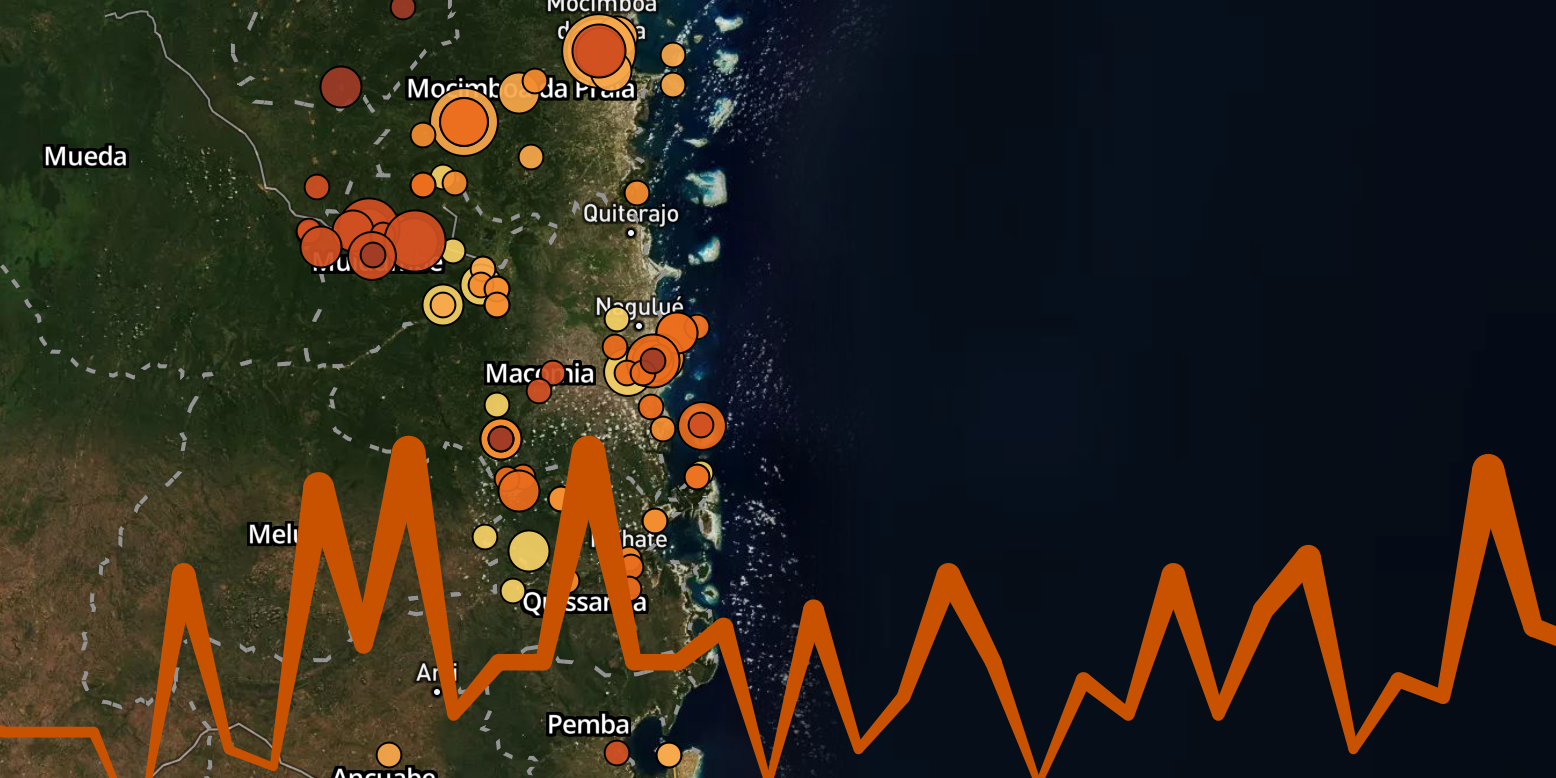 Insurgents struck close to the liquified natural gas (LNG) projects in Palma district on 7 December, arriving in the village of Mute, 25 kilometers south of Palma town, and burning homes. Government forces responded, backed by helicopters. Insurgents fought them back and remained in Mute through the night. One member of the state security forces was killed in the fighting, and three others were wounded. According to one source, insurgents used mortars and rocket-propelled grenades during the fighting.

On 8 December, the insurgents who had stayed the night in Mute moved north on the main road toward Palma, arriving in Ngueo, about two kilometers north of Mute. The attackers destroyed several houses, and residents fled north to Palma. The attacks at Mute and Ngueo caused Total to pause work on its nearby LNG facility out of concern for contract workers who are housed in Mute.

The same day as the attack on Ngueo, insurgents launched three attacks in Nangade district. In Mandimba, just across the border from Palma district near Pundanhar, insurgents ambushed a car carrying civilians from Palma to Nangade along the contested westerly route out of Palma. One person was killed, three were injured, and the insurgents kidnapped at least two women. The route to Palma temporarily shut down after the attack, but drivers were braving it once again by 11 December.

The other 8 December attacks in Nangade district took place in Nkongo and Ntamba, both south of Mandimba. In Nkongo, insurgents shot into the air to disperse civilians and then stole a number of motorbikes. In Ntamba, insurgents arrived in the village, but no casualty reports for the attack are available.

Insurgents undertook more resource-gathering raids in Macomia district last week, starting in Chai, an inland town in the north of the district, where eight insurgents held up a grocery store on 9 December, stealing food. The insurgents did not hurt anyone, telling civilians that they only wished to resupply their fighters. The next day, off the Macomia district coast, insurgents in a motor boat waylaid several fishermen. The men were set free in short order, but insurgents kept a portion of their fish.

On 12 December, insurgents went on a shooting spree through Nangade district. Traveling by motorbike, the attackers killed 14 civilians and destroyed four vehicles across the villages of  Namiune, 25 de Setembro, Naleke, Chicuaia Nova, Litingina, and Lukuamba. They also reportedly stole fuel from the villages they visited. The spree continued the next day in Samora Machel and Namuembe, but no casualty reports have emerged.

Government forces launched their own operations last week as well. In Pemba, police arrested six people accused of being associated with the insurgency. Searches of the detainees led to the recovery of three assault rifles, as well as bullets and substantial sums of cash.

On the Mocimboa da Praia coast, helicopters have been in action to destroy insurgent boats in the area. The government issued a warning to fishermen and traders not to sail too far north of Ibo district, as that section of the coast is now effectively a free fire zone against coastal marine traffic. Many of the boats that insurgents captured in Mocimboa da Praia harbor have now been destroyed. However, a downside of the operation for the government is that the no-go order has temporarily shut down the sea route to Palma, further isolating the town.

Information also came through last week about earlier attacks that had not previously come to light. A refugee who made his way to Pemba reported that insurgents based near Nchinga, Muidumbe district beheaded an elderly man in nearby Muambula on 6 December. The same group shot and injured a man in Muambula the next day.

A report last week from Africa Intelligence details a contract between the Mozambican military and the South African weapons manufacturer Paramount Group. According to the article, Mozambican President Filipe Nyusi and Defense Minister Jaime Neto personally negotiated the deal, through which Paramount will supply armored vehicles, helicopters, and training to Mozambican soldiers. The details of the report are unconfirmed, but there is already strong evidence of Paramount’s involvement with the Mozambican military. In late November, at least five Marauder-type armored vehicles, manufactured by Paramount, appeared in Mozambique.

The added hardware will be a welcome addition for the overstretched military, but the Paramount contract raises broader questions about the organization of Mozambique’s security services. With Paramount contracted to the Ministry of Defense and South African private military contractors Dyck Advisory Group (DAG) working for the Mozambican national police, the two wings of Mozambique’s security apparatus are now using competing companies to procure the same capabilities (helicopters, pilots, and training) for the same conflict.

In some ways this makes sense. DAG is working at the outer limits of its current capacity and not yet turning the tide of the conflict, so it follows that the security services would pursue another supplier. Yet, viewed through the lens of competition between the military and police, the dual contracts appear counterproductive. Evidence of friction between the police and the military abound. Police officers have complained about the fact that they do not receive the deployment bonuses being paid to soldiers, while the military has suffered casualties in friendly fire incidents with police-associated local militias. Joint operations between the two appear rare. The two services running parallel air assault operations is more likely to exacerbate this friction than to solve it.

The government announced last week that it has no money to contribute to its new Integrated Northern Development Agency (ADIN), which is meant to play a major role in addressing the underlying causes of the Cabo Delgado conflict. Though the agency expects to receive major funding from international donors, that money has been slow in materializing, which is part of the reason for ADIN’s slow start. To the extent that inefficient security contracting is taking up funds that could be going toward ADIN projects, it is hard to avoid the conclusion the parallel DAG and Paramount contracts reflect intra-governmental and intra-Frelimo power struggles more than strategic considerations.

The Mozambican government now puts the number of people displaced from their homes in Cabo Delgado at 560,626, according to a statement from the country’s Council of Ministers. That is a major increase from the government’s last public estimate in October of 435,000 displaced.

Some of the people now living on the outskirts of the conflict zone received some good news last week: the lights will soon be back on in parts of Nangade and Mueda, where Mozambique’s National Energy Fund is setting up solar panels to help alleviate a months-long blackout in the district capitals. The power cut is the result of insurgent sabotage against power lines running through Mocimboa da Praia district. The government has made numerous attempts to repair the lines, but have been turned away by insurgents each time. The solar panels will power some government buildings, but private electricity users will still have to rely on generators.

Relations between the government and refugees in other parts of the province, however, are becoming more strained. In Metuge district, people displaced from nearby Quissanga district are resisting government encouragement to return to their homes. Mozambican police chief Bernardino Rafael has been urging the over 40,000 refugees from Quissanga to “reoccupy” the district, saying that it is safe. Quissanga residents, however, are reluctant to trust Rafael’s promises after an earlier attempt to reoccupy Quissanga fell apart following renewed insurgent attacks.

To help make up the security deficit, some displaced civilians asked Mozambican Prime Minister Carlos Agostinho do Rosário for the government to issue them weapons so that they could defend themselves from insurgents. The prime minister refused their request, saying, “Firearms must be with … the Defense and Security Forces and with the people they trust.” The statement underlines the tension in the government’s strategy of arming civilian militias within the conflict zone — the government needs more manpower, but adding more armed actors to the situation risks the government, as do Rosário put it, “losing control of the situation.” Those considerations are thin comfort to displaced populations, however, who lack confidence in state security forces’ ability to protect them.

Their confidence has likely not been bolstered by the behavior of police in Pemba, who are meant to be investigating arriving refugees to ensure that there are no insurgents among them. Pemba residents report that rather than conducting any real vetting of refugees who land on Pemba’s beaches, police are instead demanding bribes to waive people through. The bribes are a quintessential piece of security force misconduct, simultaneously exploiting vulnerable civilians and threatening security in Pemba.

On the international front, donor countries are finding creative ways to contribute to Mozambique’s counterinsurgency effort without directly engaging with the messy realities of supporting Mozambican combat operations. Japan announced that it will donate over $1.8 million to build up a Mozambican coast guard capability in Cabo Delgado, with an aim toward protecting displaced civilians making their way out of the conflict zone by sea.

Portugal, however, is jumping directly into supporting Mozambique’s military effort. Portuguese Defense Minister João Gomes Cravinho said that a team from the Portuguese military would arrive in Mozambique in January to draw up a plan for Portugal to assist in training and logistics for the Mozambican armed forces. Cravinho also pledged that his government will use its upcoming European Union presidency to push that organization’s promised military and humanitarian assistance package for Mozambique.

On 10 December 2020, a group of six insurgents kidnapped an unspecified number of fishermen in Mucojo (Macomia, Cabo Delgado). The fishermen were released but their catch was seized. No casualties reported. 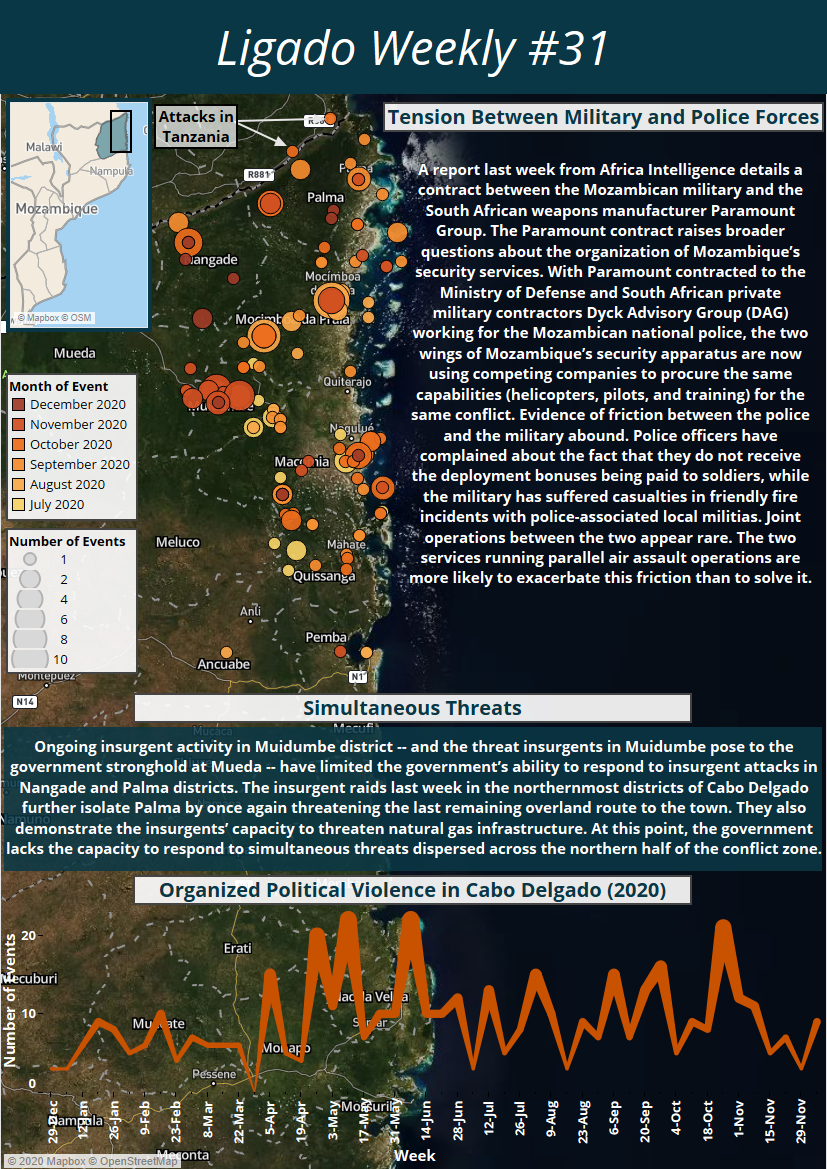