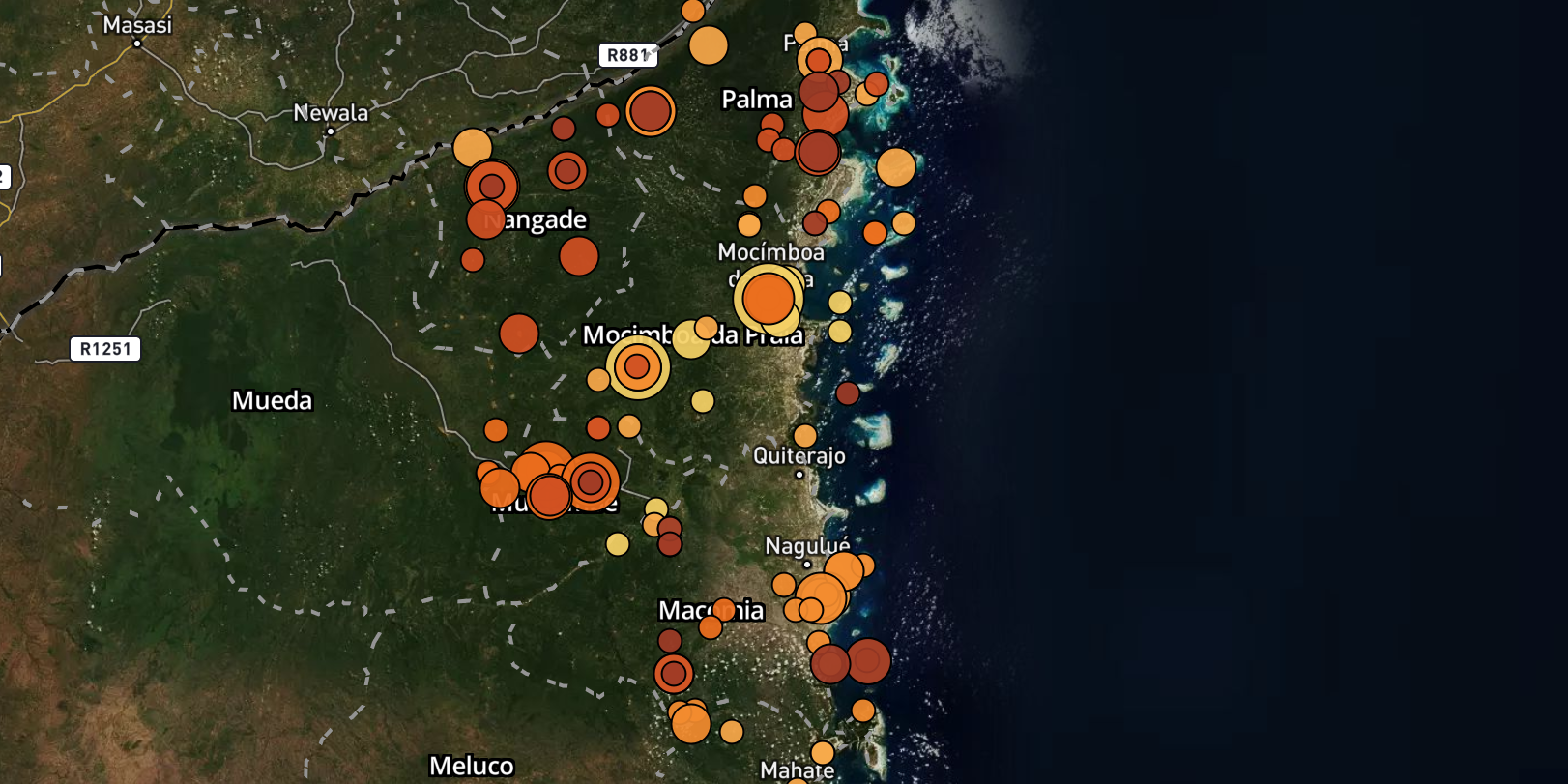 Nangade district was once again the epicenter of the Cabo Delgado conflict last week. The focus of insurgents, though, shifted somewhat from the R763 road in northern Nangade to the district’s southeastern border with Mocimboa da Praia district.

On 30 January, insurgents attacked the village of Nkonga, Nangade district, just west of the border with Mocimboa da Praia. No casualties have yet been reported from the attack, but insurgents stole food and burned homes in the village. Insurgents also returned the next day and renewed their assault. Government-backed militias active in Nangade district have reportedly mobilized to counterattack.

In addition, at some point during the week, there were clashes between government-backed militias and insurgents in Panjele, Mocimboa da Praia district, which is just east of the Nangade border and roughly 20 kilometers south of Nkonga. According to contacts in the militia, 27 insurgents were killed in the fighting, as were three militia members. Another two militia members were reported injured. The militias also recovered weapons from insurgents, including rocket propelled grenades and assault rifles. Given the reported casualty imbalance, the claim of insurgent deaths is likely inflated. Yet the clashes themselves are noteworthy, as the Mocimboa da Praia- Nangade border had not previously been a site of militia activity. It is unclear if the militia members were local to the area or traveled to fight in Panjele. The report noted that they turned the captured insurgent weapons over to government forces in Mueda, which suggests that the militia is at least associated with the police units running militia forces out of Mueda.

Despite the focus on the Mocimboa da Praia – Nangade border, insurgents did not ignore the R763 connecting Palma and Mueda last week. On 31 January, civilians discovered a roadblock built by insurgents on the section of the road between Pundanhar and Palma town.

New information also emerged last week about previously reported attacks in Nangade district. In the last Cabo Ligado weekly update, we reported an attack on Mandimba, Nangade district on 22 January that did not result in any casualties. According to people who fled Mandimba for Nangade town, insurgents actually arrived in Mandimba on 21 January and occupied the town until 26 January. During that time, the insurgents killed one civilian and two border police in Mandimba, in addition to looting the town. Civilians who escaped the area also reported that insurgents had beaten a number of civilians who they believed had collaborated with the government. In addition to speaking local languages, some insurgents reportedly spoke in Swahili and Somali.

Also during the occupation of Mandimba, insurgents killed three civilians in Namiune, 10 kilometers to the south of Mandimba. It is unclear if those casualties represent an update to the reported 21 January attack on Namiune or if they arose from a separate attack.

Recent accounts of conditions in insurgent camps from escaped civilians emphasize the resource squeeze the insurgents are in. A combination of lack of available crops during the lean season and mass displacement limiting the availability of lootable resources has left insurgents with few sources of food and other basic supplies. A new report from a survivor who was held by insurgents in Manilha, Mocimboa da Praia district suggests that it is not just supplies the insurgents lack, but money as well. The survivor reported that insurgents met with a Tanzanian who provides financial support to the insurgency, but who said at the meeting that no more funds would be forthcoming. The Tanzanian also reportedly urged insurgent fighters to return to their homes so that the organization would not have to feed them. Fighters were said to object to this, saying that they are not welcome in their homes because they joined the insurgency.

The survivor’s report is unconfirmed and lacks some crucial details about how the survivor overheard or learned of this meeting. However, to the extent that it comports to other accounts of insurgent lack of resources, it paints an interesting picture. Insurgent fighters are trapped in the insurgency, as they seem to lack the ability to move between insurgent camps and their home communities easily. There have been no reports of insurgents attempting to return home, and, Mozambican president Filipe Nyusi’s recent amnesty offer notwithstanding, insurgent deserters might reasonably expect to be killed if they enter government custody.

At the same time, reports of looting attacks have declined precipitously outside of the Palma-Nangade corridor in recent weeks. If insurgents in Mocimboa da Praia are not making up their supply deficit by looting or purchasing food on the black market due to a lack of funds, then their resource problem might become acute quite quickly. If the insurgent cash flow problem is, as reported, due to an interruption in foreign assistance, an interruption at such a crucial time might strain relations between the Mozambican core of the insurgency and external sponsors.

Insurgents are not the only ones hungry in Cabo Delgado. Tanzanian authorities have banned the sale of food to cross-border traders from Mozambique, according to merchants in Palma. One trader was arrested and held for two weeks for attempting to transport food bought in Tanzania back over the border into Palma. The Tanzanian government has given no reason for the ban, but it is likely part of a strategy to deny resources to the insurgency.

Whether or not it is succeeding as a war tactic, the ban is contributing to hunger among civilians in Palma. Between the lack of food imports from Tanzania and the dangers of travel on R763 between Palma and Mueda, Palma food supplies have decreased and prices jumped significantly. In a province where, even before the conflict, over half of the population was living on an income of less that 150 meticais ($1.90) per day, prices for staple foods like rice and flour have increased to 120 and 80 meticais per kilogram, respectively, as of 29 January.

In Metuge district, reports of deaths resulting from the diarrhea outbreak in refugee resettlement camps have begun to emerge. By 29 January, at least seven people had died of the disease at the 25 September Center, according to families living in the camp. Other deaths have occurred at the Ntacota and Taratara centers, but no count of the fatalities has been reported.

The Mozambican Bar Association heavily criticized the government’s approach to the Cabo Delgado conflict, including its treatment of displaced populations, in a new report on human rights in the province. The report highlights the dangers faced by women and girls who have been displaced by the conflict, pointing out the high rates of domestic violence, sexual harassment, and child marriage among displaced people. The Bar Association also derided the government’s lack of a clear counterterrorism strategy and accused the Nyusi administration of having “wasted opportunities or international cooperation in preventing and combating terrorism.” None of the charges in the report are new, but they add to the chorus of dissatisfaction from Mozambican civil society organizations over the direction of the conflict.

Some opportunities for international cooperation came closer to fruition last week. Portuguese Foreign Affairs Minister Augusto Santos Silva told journalists on 25 January that his recent meetings in Maputo had been successful and he expects a framework for European Union (EU) assistance to Mozambique in Cabo Delgado to be worked out “in the coming weeks.” Other reports, however, suggest that Mozambique has been slow to outline its needs to the EU. Speaking a day later to the European Parliament, Santos Silva made the case that intervening in Cabo Delgado is “an interest of the European Union… not just an internal issue in Mozambique.” He said that one of Portugal’s main goals as president of the European Council is to strengthen the EU’s cooperation with African countries, and with Mozambique in particular, to avoid “penetration and consolidation of international terrorist networks” in East Africa.

Portugal also expects to increase its bilateral security cooperation with Mozambique in the form of a new defense cooperation agreement to be signed in February. The agreement will replace an existing deal set to expire in February, and will include training of Mozambican military forces by Portuguese counterparts. A Portuguese technical team is in Maputo working out the details.

Rumors appeared last week that Total is considering shifting its logistical operations for its Mozambique liquified natural gas projects to the island of Mayotte, some 500 kilometers off the coast of Cabo Delgado. If Total did make the move to Mayotte, it would dash hopes in Mozambique that the French company’s gas project would bring with it a great deal of onshore economic activity. Total vigorously denied the rumor, but admitted that it is investigating how to incorporate Mayotte into its operations. Total also further reduced the number of workers at its Palma district construction site last week.

Any shift to Mayotte would generate maritime security concerns in the Mozambique Channel — concerns that the French Navy already seems set to address. Shortly after French Armed Forces Minister Florence Parly named the ship as one of the resources France could bring to bear in Mozambique, the frigate Nivôse interdicted a dhow laden with methamphetamines and heroin in the Mozambique Channel on 24 January. The operation does not seem to have been part of any formal maritime security agreement, but is indicative of France’s ongoing interest in the Cabo Delgado security situation.

Nigerian Foreign Minister Geoffrey Onyeama was in Maputo on 30-31 January and, in a meeting with Mozambican Prime Minister Carlos Agostinho do Rosário, offered to share his country’s expertise in fighting Islamist insurgencies. Setting aside questions of Nigeria’s qualifications to give advice in that arena given the current state of the conflict in the country’s north, the offer is significant as part of Nigeria’s campaign to lead the African Union’s Peace and Security Council, which may play a role in coordinating regional or continental assistance to Mozambique in the future. 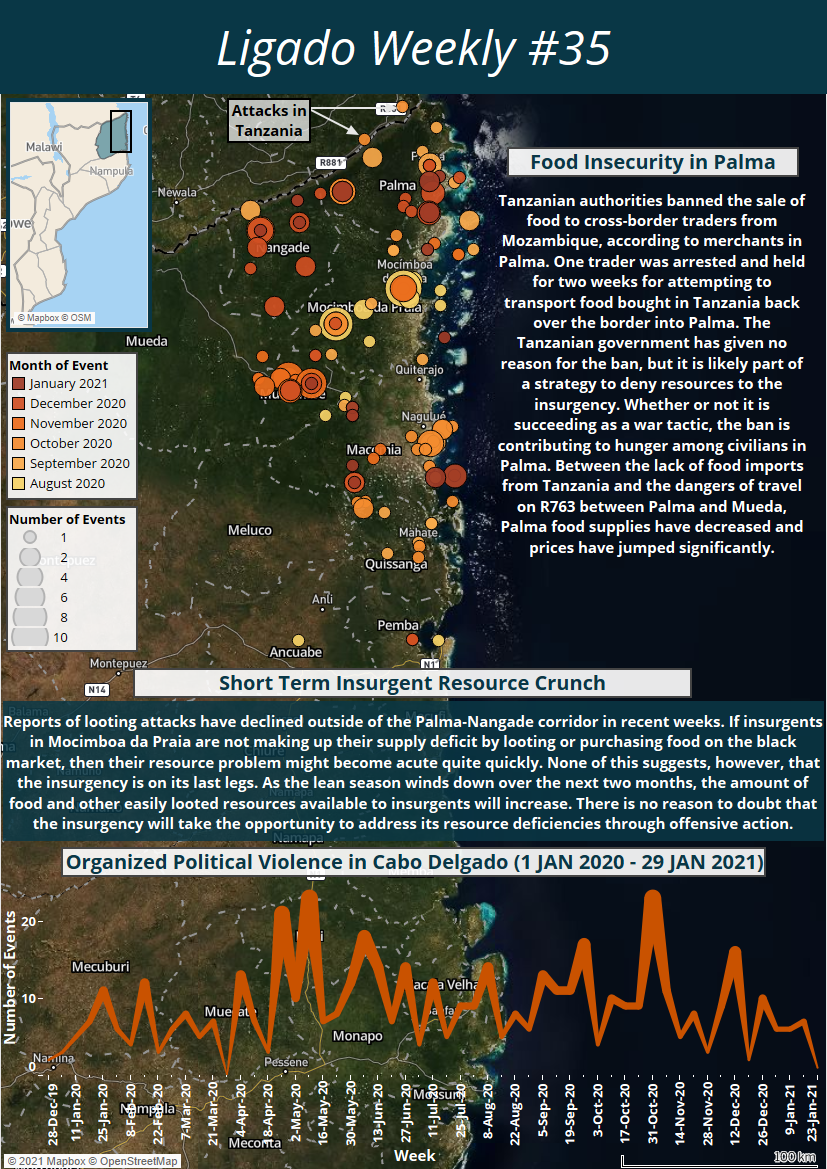