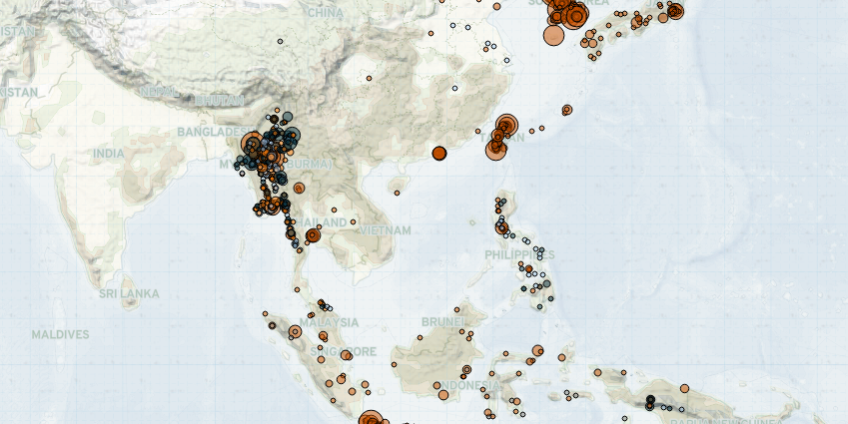 Last week in East and Southeast Asia, at least six civilians were injured as unidentified armed groups detonated multiple explosive devices at or near schools in Myanmar’s Kachin state. Meanwhile, clashes between military troops and local defense groups were reported in several townships in Sagaing region. In Indonesia, the separatist West Papua National Liberation Army (TPNPB) clashed with state forces at a military post in Yahukimo Regency, Papua province. Meanwhile, waves of labor demonstrations took place in Indonesia and South Korea. In Taiwan, a series of rallies were reported ahead of a referendum on 18 December. Lastly, in Thailand, an increase in the number of pro-government protest events was reported.

In Myanmar, explosions were reported in the vicinity of schools in Kachin state last week. On 26 November, at least six people — including teachers and students — were injured after an IED exploded as a school bus was turning into a high school in a village in Hpakant township, Kachin state. Two other incidents involving the use of Molotov cocktails and explosive devices were also reported in Kachin state on 24 November. No groups have claimed responsibility for the attacks. The explosions come as basic education schools were reopened on 1 November. Many students have refused to go back to school, viewing attendance as condoning the military junta (Aljazeera, 17 November 2021).

In Sagaing region, the military and the military-backed militia Pyu Saw Htee clashed several times with local defense groups last week along the Kalay-Gangaw Road. The military is attempting to secure this strategic road in order to send reinforcements and ammunition from central Myanmar (Myanmar Now, 24 November 2021). Notably, the chief minister for Sagaing region, appointed by the military junta, was attacked for a second consecutive week by local defense forces in the region. An attack against a junta-appointed minister was reported in Ayeyarwady region the week prior as well (Irrawaddy, 23 November 2021).

Meanwhile, fighting between the military and local defense groups led to a 233% increase in political violence in Kayah state last week compared to the prior month (see ACLED’s Early Warning Research Hub for more). Fighting between the military and the joint forces of the Karenni Nationalities Defense Force (KNDF) and Karenni National Progressive Party/Karenni Army (KNPP/KA) was concentrated in Demoso and Loikaw townships (Myanmar Now, 25 November 2021). Kayah state has seen significant battles since the military seized power in February (for more, see this ACLED report).

In Indonesia, a soldier was killed and another was wounded last week in an armed clash between the TPNPB and Indonesian military forces in Suru-Suru district, Yahukimo Regency, Papua province on 20 November. The military claims that the clash was the result of a rebel attack at a military post, staged in advance of West Papua Independence Day on 1 December (Kompas, 22 November 2021). Three days later, on 23 November, TPNPB rebels set fire to five shops in the Suru-Suru district, leading to the displacement of local health workers and Papuan residents (Tribunnews, 23 November 2021).

Also, in Indonesia, the number of labor demonstration events increased sharply last week, following the announcement of the monthly minimum wage for next year. Workers across the country took to the streets to demand higher wages, as regional raises fall in line with the central government’s guidelines of only 1% increase (Kontan, 25 November 2021). This represents only a fraction of the 5 to 20% increase requested by labor unions (The Jakarta Post, 17 November 2021).

Also, in Indonesia, the Constitutional Court decided that the Omnibus Law on Job Creation is contrary to the Indonesian constitution, thus declaring it to be a non-legally binding policy (Tempo, 25 November 2021). The law, enacted in 2020, is meant to cut red tape, make labor laws more flexible, and bring in investments to create jobs (Bloomberg, 25 November 2021). The controversial law, however, triggered waves of labor union-led protests criticizing the law for being mainly beneficial for investors and employers, and detrimental to labor rights (The Jakarta Post, 6 October 2020). While the decision does not nullify the law, it requires the government to amend certain aspects within a two-year period, or else the law will be permanently deemed unconstitutional (Bloomberg, 25 November 2021).

In South Korea, unionized truck drivers staged nationwide rallies last week, demanding the expansion of the safe freight rates system to cover all types of trucks and cargo​​. The safe freight rate system, which was designed to prevent dangerous driving and to guarantee minimum cargo load rates for truckers, is set to expire next year (The Korea Herald, 25 November 2021). Separately, the death of former President Chun Doo-hwan on 23 November triggered a series of protests condemning the former president’s role in a crackdown on the civil uprising in the city of Gwangju in 1980. A military crackdown on pro-democracy demonstrators protesting against martial law, imposed after a military coup in 1979 led by Chun Doo-hwan, left more than 200 people dead or missing in 1980, according to official figures (BBC, 7 November 2018).

In Thailand, the number of anti-government demonstration events continued to decrease last week after the Constitutional Court ruled against three protest leaders calling for the reformation of the monarchy on 10 November (ACLED, 17 November 2021). Meanwhile, the number of pro-government protest events increased last week, with demonstrators calling for a ban on Amnesty International Thailand over their vocal support for the protest leaders (Bangkok Post, 25 November 2021).