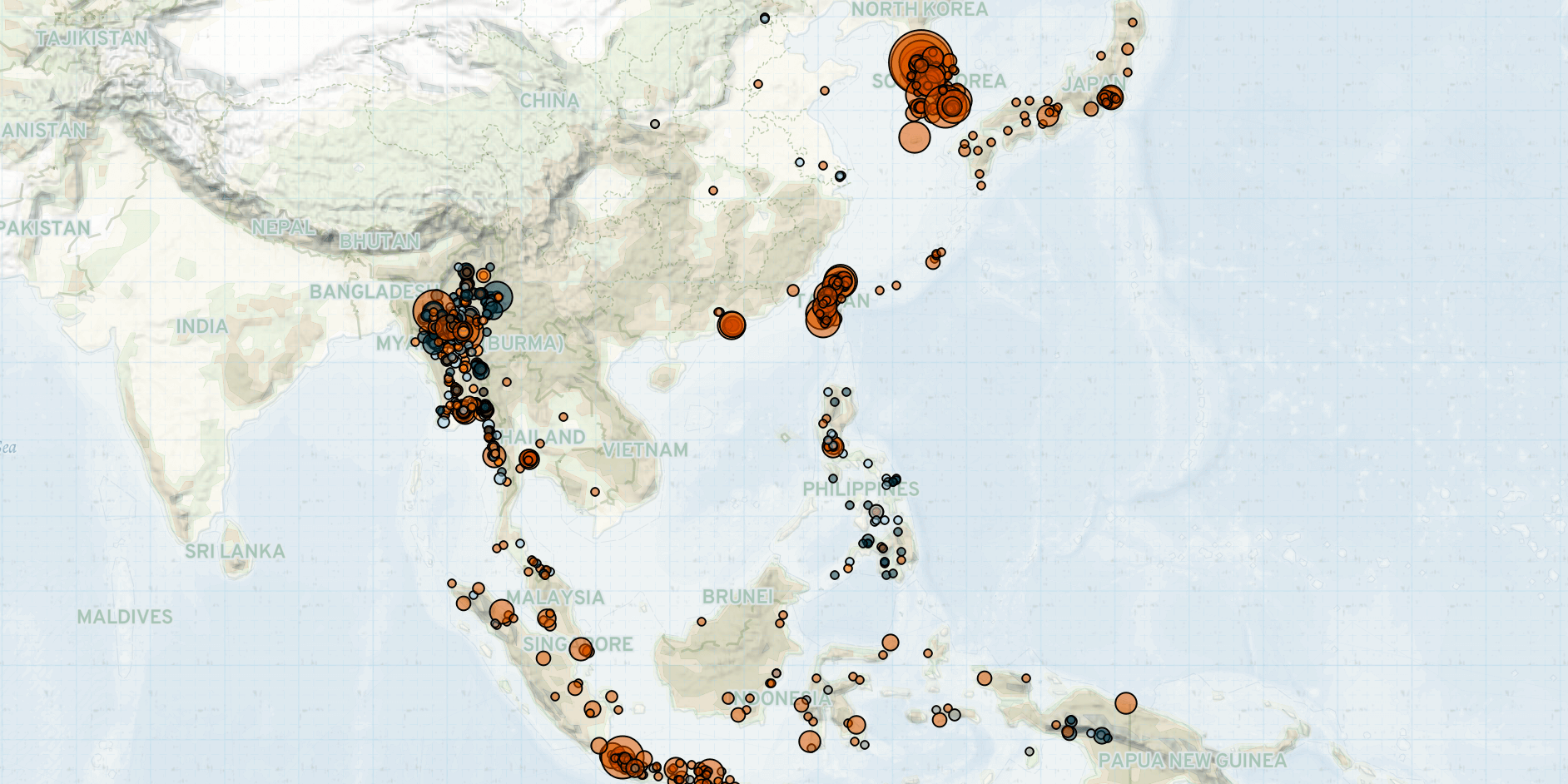 Last week in East and Southeast Asia, state forces targeted anti-coup protesters and civilians in Myanmar in Yangon and Sagaing regions, sparking widespread international condemnation. Meanwhile, ousted leader Daw Aung San Suu Kyi was sentenced to four years in prison, which was later commuted to two years by the military regime. In the Deep South of Thailand, there was a surge in clashes between state forces and Malay Muslim separatists. In Indonesia, fighting between the separatist West Papua National Liberation Army (TPNPB) and state forces continued. In the Philippines, the Supreme Court upheld the legality of most provisions of an ‘anti-terrorism’ law passed in 2020 while declaring two provisions of the law unconstitutional. Additionally, clashes were reported between state forces and Abu Sayyaf militants. Lastly, in South Korea, parents’ associations held protests against a coronavirus vaccine pass mandate for children.

In Myanmar, state forces targeted anti-coup protesters in Yangon city on 5 December. Several people were killed and injured after military troops rammed a vehicle into a crowd of peaceful protesters from behind. The incident, which was captured on camera and widely shared on social media, drew international condemnation, including from the UN and the US Embassy in Myanmar (CNN, 6 December 2021).

The incident was followed by further violence against civilians last week in Salingyi township, Sagaing region, which provoked additional international condemnation (OHCHR, 10 December 2021). On 7 December, military troops raided Done Taw village and arrested 11 civilians — including five teenagers and a person with disabilities — and burned them to death (Myanmar Now, 7 December 2021).

In the aftermath of these two incidents, anti-coup supporters staged a nationwide ‘Silent Strike’ campaign on International Human Rights Day on 10 December to commemorate the victims killed by the regime since the military coup. Businesses were shut and streets were emptied across the country as part of the public campaign to defy the military regime (Reuters, 10 December 2021). This marks the second nationwide ‘Silent Strike’ campaign since the coup, following an earlier strike held on 24 March.

Meanwhile, activists took to the streets across Indonesia to celebrate Human Rights Day on 10 December to demand the government address cases of human rights violations. In Jakarta, activists held a protest in front of the National Commission on Human Rights, demanding a new investigation into the death of prominent human rights activist Munir Said Thalib, who was killed 17 years ago. Munir was killed by arsenic poisoning on a flight from Jakarta to Amsterdam in an Indonesian state-owned airline in 2004. Munir was a vocal human rights lawyer who was investigating the disappearance of activists at the end of President Soeharto’s rule, during 1997 to 1999 (Human Rights Watch, 7 September 2020). Criminal cases In Indonesia have an 18-year statute of limitations to be investigated, which means the case will expire next year if there is no further progress (CNN Indonesia, 7 September 2021). Although two people have been sentenced for their involvement in Munir’s assassination, it is believed that the people who ordered the killing are still free (Human Rights Watch, 7 September 2020).

Last week in the Philippines, the Supreme Court announced its ruling on the contested Anti-Terrorism Act of 2020, upholding all but two sections of the act. The Supreme Court deemed unconstitutional the section of the law which criminalizes dissent intended for physical harm or posing a risk to public safety. Moreover, it was found unconsitutional for the Anti-Terrorism Council to designate individuals as “terrorists” based on requests by foreign governments (Rappler, 9 December 2021). However, the court upheld the majority of the law, including a controversial provision that allows state forces to arrest and detain suspected “terrorists” for up to 24 days without any warrant (Rappler, 9 December 2021). Following the announcement, lawyers leading the charge against the law said that they would continue legal challenges against the law, particularly over the provision allowing for 24-day warrantless arrests (Philippine Star, 10 December 2021). On 10 December, the main Human Rights Day mobilization in Metro Manila was marked by condemnations of the Anti-Terrorism Act (Bulatlat, 10 December 2021). Meanwhile, the government said it would study its next moves in view of the Supreme Court’s annulment of parts of the law (Philippine Daily Inquirer, 9 December 2021). While the government maintains that the Anti-Terrorism Act is needed to fight insurgencies, critics argue that the law could be used to clamp down legitimate dissent, including public protests and labor strikes (The Diplomat, 10 December 2021).

Also, in the Philippines, two members of the Islamist militant group Abu Sayyaf and a soldier were killed during an operation by state forces in Patikul, Sulu, Bangsamoro region. State forces announced that they were pursuing a group led by Radullan Sahiron, the leader of Abu Sayyaf, when the firefight occurred (Philippine News Agency, 8 December 2021). The clash between state forces and rebels contributed to a 200% increase in violence in Bangsamoro region last week relative to the month prior (see ACLED’s Early Warning Research Hub for more).

Lastly, in South Korea, parents’ associations held protests in several locations across the country last week against mandatory COVID-19 vaccination passes for children and teenagers (Reuters, 9 December 2021). The demonstrations come in response to a government announcement on 3 December that anyone aged 12 or older will require a proof of vaccination pass to enter public spaces from February 2022. While some parents who refuse to vaccinate their children took to the streets, civic groups also filed petitions to the National Human Rights Commission, accusing the government of infringing upon teenagers’ rights (Korea JoongAng Daily, 8 December 2021). Meanwhile, the Korea Disease Control and Prevention Agency (KDCA) reaffirmed its plan to expand the vaccine pass system to minors despite the backlash (Korea Times, 11 December 2021).