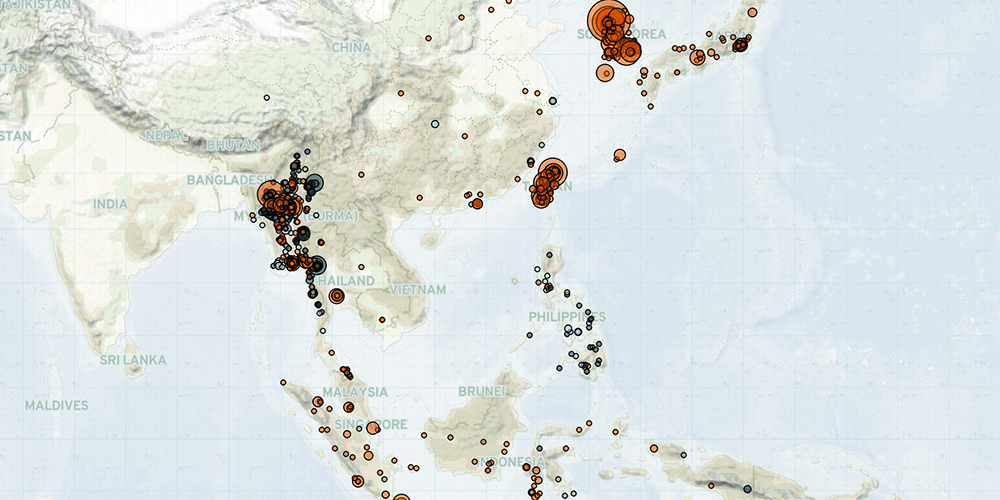 Over the past month in East and Southeast Asia, heavy fighting between the military and ethnic armed organizations (EAOs) and resistance groups continued in Myanmar. On 24 December, military troops captured and burned alive at least 35 civilians in Hpruso township, Kayah state. Meanwhile, the Cambodian Prime Minister Hun Sen met with the Myanmar regime chair in Nay Pyi Taw, prompting protests ahead of his visit. In the Philippines, there was an increase in armed clashes between state forces and communist New People’s Army (NPA) rebels. Meanwhile, outgoing Philippine President Rodrigo Duterte withdrew his senatorial candidacy. There was a decrease in fighting between separatist rebels and state forces in both Indonesia and Thailand. In Taiwan, nationwide rallies were reported ahead of a multi-issue national referendum. In South Korea, the presidential pardon of former President Park Geun-hye led to a series of protests both in favor of and against her release.

​​In Myanmar, there was a 62% increase in political violence over the past month relative to the past year (see ACLED’s Early Warning Research Hub for more). Armed clashes between Myanmar military forces and EAOs and resistance groups continued across Myanmar over the past month, with heavy fighting reported in Magway and Sagaing regions, as well as in Kayah and Kayin states. In many of the clashes, the use of aerial bombing by the military resulted in civilian fatalities and the displacement of thousands of civilians.

In Sagaing region, deadly clashes broke out between the Myanmar military and a coalition of three resistance groups – the People’s Defense Force (PDF) – Kalay, the Chin National Defense Force (CNDF), and the Chinland Defense Force (CDF) – on 22 December in Nat Chaung village, Kale township. The military suffered heavy fatalities during the clash. Following the clash, at least nine civilians were killed when the military carried out airstrikes in the area on 23 December. The military also torched nearly 40 houses in the village (Myanmar Now, 4 January 2022).

Elsewhere, in Kayah state, military troops captured, tortured, and burned alive at least 35 civilians in Hpruso township on 24 December, prompting international condemnation (UN, 29 December 2021; US Department of State, 28 December 2021). Among the victims were children and two humanitarian workers from Save the Children (Al Jazeera, 26 December 2021). Meanwhile, significant escalation in fighting between the Myanmar military and Karenni resistance groups, including the Karenni National Progressive Party/Karenni Army (KNPP/KA), began in late December. The military reportedly sustained heavy casualties during fighting on 31 December and across clashes that took place between 3 and 6 January.

In Myawaddy township, Kayin state, fighting broke out between the military and the Karen National Union/Karen National Liberation Army (KNU/KNLA) after the military trespassed on Lay Kay Kaw town, controlled by the KNU/KNLA, on 15 December. More than 4,000 villagers from Lay Kay Kaw and surrounding villages fled the fighting, including thousands who fled across the Thai border (Karen News, 18 December 2021). Later, on 23 December, the military junta conducted airstrikes and fired heavy artillery on the town. Fighting continued over the following week between 24 and 30 December.

Separately, the Cambodian Prime Minister Hun Sen — the current chair of the Association of Southeast Asian Nations (ASEAN) — arrived in the capital of Myanmar, Nay Pyi Taw, on 7 January to meet with the Myanmar regime chair, Min Aung Hlaing. The visit drew criticism from anti-coup supporters and activists, who state that the visit lends legitimacy to the regime (The Guardian, 8 January 2022). Ahead of the two-day visit, nearly 200 civil society organizations – including those from Myanmar and Cambodia – issued a joint statement condemning the visit (Progressive Voice, 4 January 2022). Hun Sen’s visit also prompted protests in Mandalay, Sagaing, Tanintharyi, and Yangon regions between 5 and 7 January.

In the Philippines, fighting between state forces and communist NPA insurgents increased over the past month in the lead-up to the 53rd anniversary of the Communist Party of the Philippines (CPP) on 26 December. NPA attacks during military-led evacuations of remote areas in the Caraga region, ahead of Typhoon Rai’s arrival in mid-December, led to both civilian and military casualties. Meanwhile, prominent CPP and NPA leader Menandro Villanueva was killed in a military raid in Davao de Oro on 5 January. Villanueva was described by the military as the most wanted communist rebel in Mindanao (ABS-CBN, 6 January 2022), and as the third highest-ranking CPP official overall (Philippine News Agency, 7 January 2022). His death comes after an alleged CPP Central Committee member was killed on 24 December during a firefight between the NPA and the military in Davao de Oro province.

Also in the Philippines, state forces engaged in multiple clashes with the Bangsamoro Islamic Freedom Fighters (BIFF) last month. A BIFF leader and bomb-maker was killed in a military operation in Shariff Saydona Mustapha, Maguindanao, on 26 December. Meanwhile, a major law enforcement operation targeting an alleged motor vehicle theft syndicate led to a firefight between police and suspected BIFF militants in Pikit, Cotabato, on 29 December. Police allege that BIFF rebels had been serving as security forces for the crime syndicate (Philippine News Agency, 31 December 2021). Three BIFF fighters were killed in the police raid.

In the electoral arena, outgoing Philippine President Duterte once again backtracked on his plans for the May 2022 elections. Duterte withdrew his candidacy on 14 December, having filed a last-minute candidacy for the senate on 15 November (Rappler, 15 November 2021), saying he wished to spend more time with his family (Rappler, 14 December 2021). Duterte’s favored successor and longtime aide Christopher ‘Bong’ Go also withdrew from the presidential race following a drop in the polls (CNN, 15 December 2021). Duterte’s pursuit of another elected post after his presidency was seen as an effort to secure himself a greater degree of protection as he faces the prospect of trial at the International Criminal Court for alleged crimes against humanity committed in the context of his administration’s war on drugs (for more, see this ACLED report on the drug war in the Philippines). However, Duterte may still enjoy political protection if the current election frontrunners win due to his close personal ties with the leading candidates (Rappler, 4 January 2022). Duterte’s own daughter, Sara Duterte, is the current frontrunner for the vice presidency (Nikkei, 22 December 2021). Experts believe that Duterte’s withdrawal from the race is likely aimed to support the Ferdinand “Bongbong” Marcos, Jr. and Sara Duterte alliance in the 2022 elections (CNN, 15 December 2021). This would be in line with Rodrigo Duterte’s attempts at securing protection for himself post-presidency, throwing his weight behind the strategy most likely to ensure such security. While previously, the thought of holding a senatorial position and having his close aide in power may have been deemed as most attainable, it may now be a better strategy to ensure that his daughter holds office instead.

In Indonesia, despite a decrease in armed clashes between the separatist West Papua National Liberation Army (TPNPB) and state forces over the past month, fighting was still reported in Papua province. On 14 December, the rebels carried out an arson attack targeting a school in Pegunungan Bintang regency. Meanwhile, in Yapen Island regency, around 2,000 villagers fled their homes following a raid carried out by state forces on 8 December in pursuit of TPNPB rebels, leading to the arrest of four people for illegal possession of weapons (HumanRightsPapua, 16 December 2021).

Elsewhere, in Central Sulawesi, Indonesian state forces clashed with the Islamist militant group East Indonesia Mujahidin (MIT) in Parigi Moutong regency on 4 January. A militant was killed during the clash. State forces also confiscated an explosive device at the site of the clash (Kompas, 4 January 2022). MIT emerged from the grievances of the 1998-2007 Christian-Muslim communal conflict in Central Sulawesi. The group pledged allegiance to the Islamic State in 2014. MIT leader, Ali Kalora, was killed in September 2021, leaving the group weakened (ACLED, 29 December 2021). The latest clash is a signal that the group remains active.

Meanwhile, the Deep South of Thailand also experienced a downward trend in political violence over the past month, despite the occurrence of several explosions and armed clashes between Malay Muslim separatists and state forces. Early January, separatists detonated an explosive and clashed with state forces in Pattani and Narathiwat. This coincides with the 18th anniversary of a raid by insurgents on the army’s Ratchanakharin camp in Narathiwat, which marked the resurgence of the separatist movement in the Deep South (Isranews Agency, 3 January 2022).