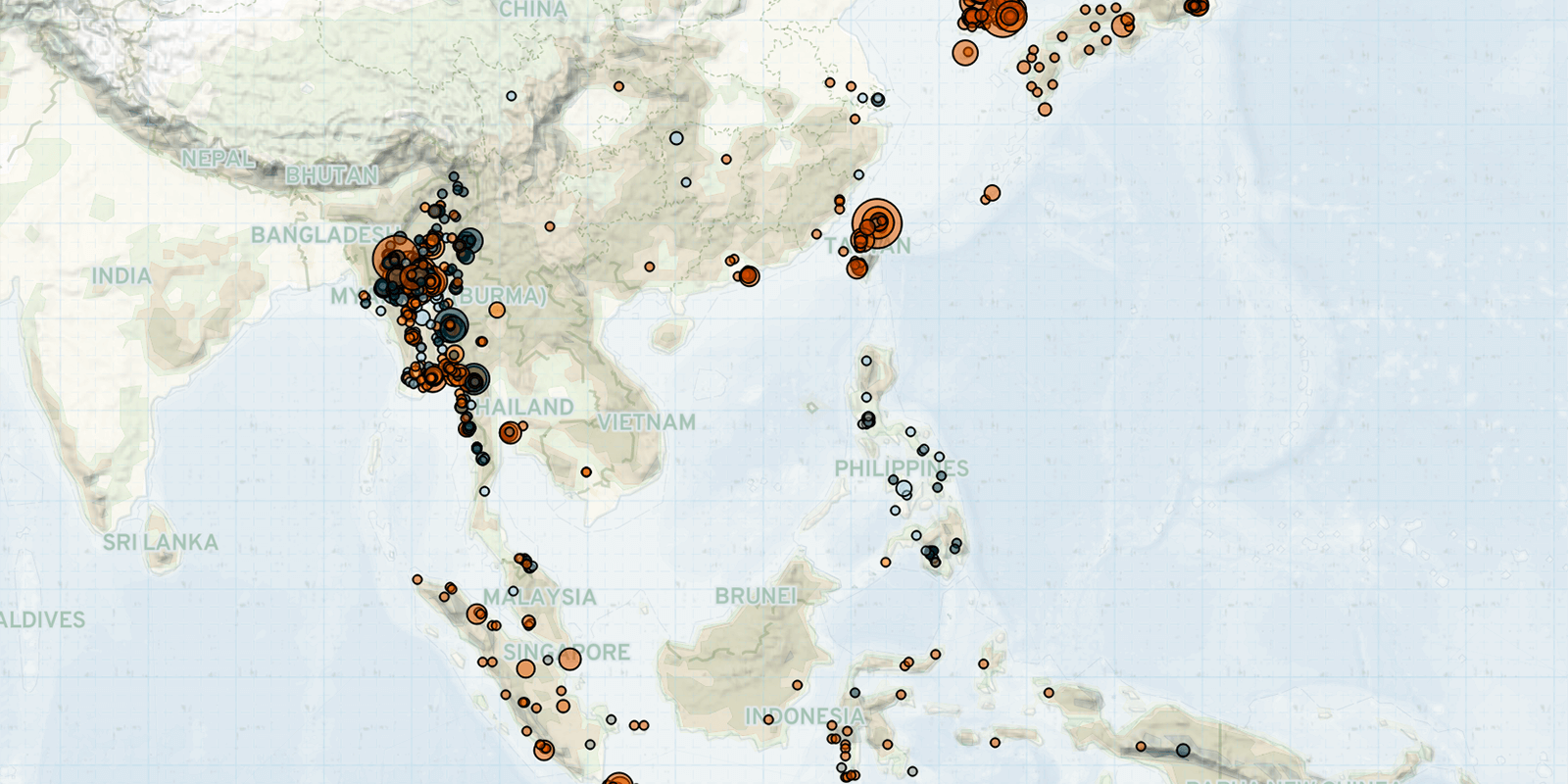 Last week in East and Southeast Asia, the Myanmar military carried out airstrikes in Kayah and Kayin states, as well as in the Sagaing region. North Korea conducted two new missile tests. In the Philippines, one person died in an IED explosion reportedly carried out by the Islamic State (IS)-linked group Al-Khobar. In Indonesia, a two-day clash between ethnic Papuan groups led to significant damage to civilian houses in Jayawijaya regency, Papua province. In the Deep South of Thailand, a decrease in political violence was reported as peace talks continued.

Armed clashes between military forces and ethnic armed organizations and/or local defense forces were reported in nine states and regions across Myanmar over the past week. Notably, the military conducted airstrikes in Kayah and Kayin states, as well as in Sagaing region, last week. In recent months, there has been an increase in the use of aerial bombardment by the military, resulting in the further displacement of civilian populations.

In Kayah state, military forces launched air and ground offensives and besieged the state capital of Loikaw last week. The offensive came after days of heavy fighting with the coalition of Karenni National Progressive Party/Karenni Army (KNPP/KA), Karenni Nationalities Defense Force (KNDF), and other Karenni resistance groups around central Loikaw. The military targeted Loikaw with airstrikes on 8 January, and had reportedly cut off water and electricity supply to all of Loikaw township by 9 January (Myanmar Now, 14 January 2022). At least half of the town’s 50,000 residents have fled after clashes in the urban center intensified (Myanmar Now, 12 January 2022).

Elsewhere, in neighboring Kayin state, the military began firing heavy artillery into villages in Kawkareik township on 8 January. The artillery fire came a day after unknown assailants destroyed a petrol truck believed to be transporting petrol for the military in Kawkareik township. Clashes between military forces and joint forces of Karen National Union/Karen National Liberation Army (KNU/KNLA) and PDF were subsequently reported on 10 January.

In western Myanmar, the bodies of 10 civilians – including a 13-year-old boy and the editor-in-chief of Chin-based Khonumthung Media – were discovered on 8 January in Matupi township, Chin state. Most of the bodies bore signs of torture, including some found with gunshot wounds. According to local sources, the bodies belonged to those who were taken away by military troops on 6 and 7 January as human shields (Irrawaddy, 10 January 2022). In Sagaing region, the military deployed three helicopters and conducted airstrikes in Ohn Hnauk village, Pale township on 10 January. State media claims that the airstrikes targeted local PDF groups holding a meeting (Irrawaddy, 11 January 2022).

On 11 January, North Korea test-fired an alleged hypersonic ballistic missile that landed into the sea east of the Korean peninsula, outside Japan’s exclusive economic zone (EEZ) (The Guardian, 11 January 2022). It was the second missile launch this year, following a missile test on 5 January. In response to the test, the US imposed a series of sanctions targeting North Korean nationals involved in the nuclear program and announced that it will seek UN sanctions if tests continue (Time, 16 January 2022). Following the latest round of US sanctions, North Korea test-fired two suspected short-range ballistic missiles on 14 January. Experts claim that these tests were conducted in an apparent strategy to pressure the US ahead of potential future negotiations to obtain greater concessions (AP, 15 January 2022). UN Security Council resolutions ban ballistic missile and nuclear tests by North Korea.

Last week in the Philippines, a rarely reported Islamist group called Al-Khobar was the primary suspect in a bombing attack on a bus line in Cotabato, which led to the death of a five-year-old child and injuries to six others. The group originated in the early 2000s as a splinter of the Islamist separatist group Moro Islamic Liberation Front (MILF) that turned to extortion activities (CNN, 1 February 2011; Philippine News Agency, 7 March 2021). In this manner, the military has described Al-Khobar as an “extortion gang” that targets private firms (Philippine News Agency, 14 January 2022). Al-Khobar also has close ties to groups aligned with IS. Al-Khobar’s founder, Salahuddin Hassan, was also the leader of the IS-inspired Dawlah Islamiyah until his killing in October 2021 (AP, 29 October 2021). Dawlah Islamiyah is believed to be an umbrella group for various militant Islamist groups that operate in the Southern Philippines ​​(International Crisis Group, 27 June 2019).

In Indonesia, rival communal militias from the Nduga and Lanny Jaya regencies clashed in Jayawijaya regency, Papua province on 8 January. The clash was triggered by the killing of a resident of Nduga regency by a Lanny Jaya regency local earlier that day. Two people were wounded during the clash, in which both groups used machetes, axes, and spears and burned houses in the district. The following day, another clash broke out between the two groups. A civilian was killed, while 21 others were injured, and at least 40 houses were burned. Communal violence is not uncommon in Papua province. In October 2021, six people were killed in the province when armed members of the Kimyal tribe attacked residents from the Yali tribe in Dekai district, Yahukimo regency.

In the Deep South of Thailand, there was a decrease in political violence last week as Thai authorities and Malay Muslim separatists met and agreed on a framework for further rounds of peace talks (Bangkok Post, 15 January 2022). It was the first face-to-face meeting since the previous round was held in March 2020 (Benar News, 7 January 2022) The latest peace talks took place after increased violence in the final days of 2021. Since a separatist insurgency reignited in the Muslim-majority region in 2004, thousands of people have been killed in violence across the Deep South (SCMP,  14 January 2022).