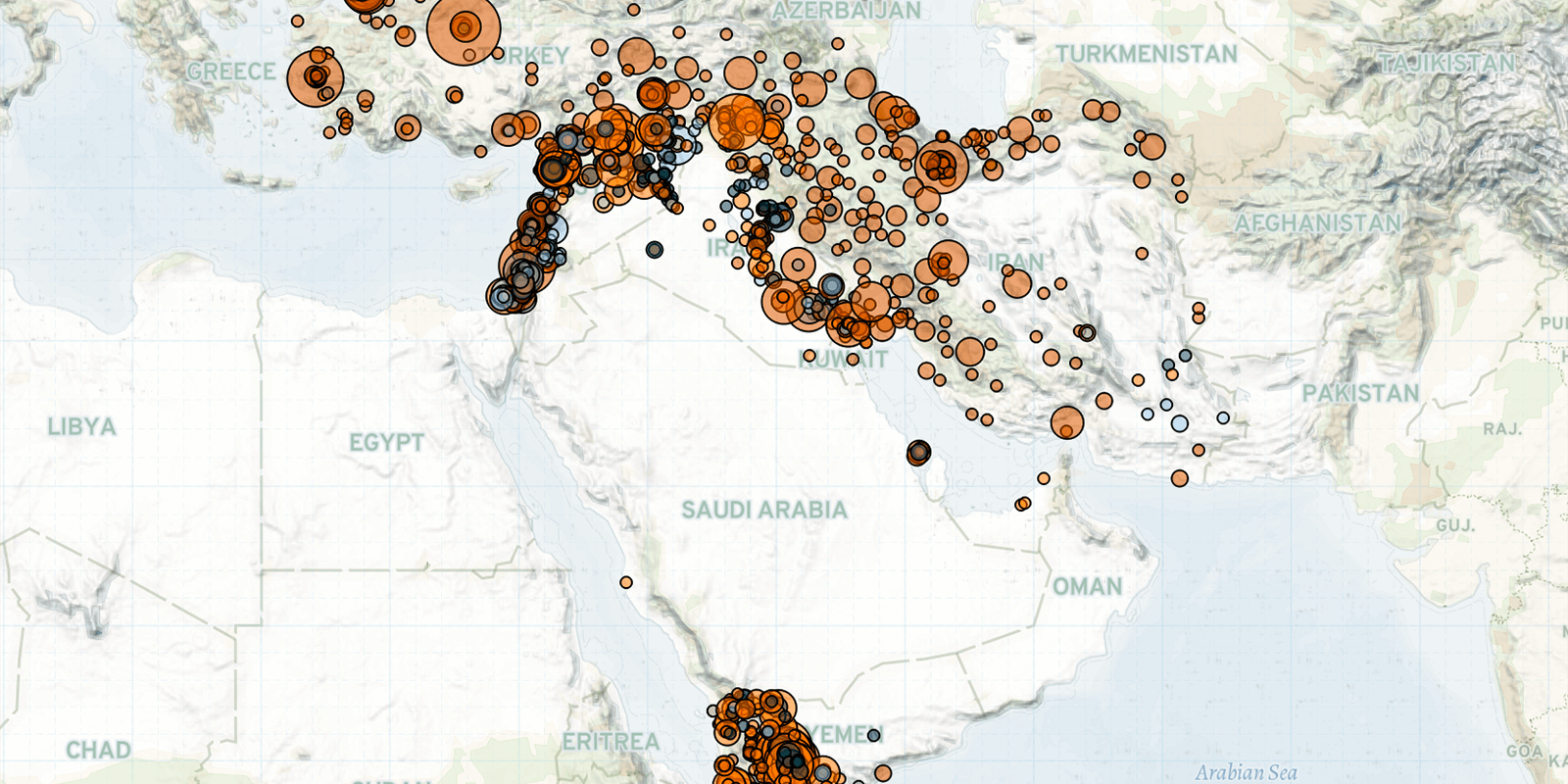 Last week in the Middle East, a Houthi drone and missile attack killed three civilians in the United Arab Emirates (UAE). Retaliatory airstrikes on Yemen caused a four-day internet outage in the country and killed scores in Sadah governorate as a detention center was struck. In Syria, almost 90 Islamic State (IS) militants escaped from a prison in Al Hasakeh city, leading to two days of clashes. Elsewhere, fighting between regime forces and opposition rebels decreased after two weeks of mutual shelling. In Iraq, overall violence decreased in Baghdad city, despite a high profile twin bank bombing and the continuation of militant attacks against poltical party offices. Anti-government protests took place in Israel. Meanwhile in Palestine, the Israeli demolition of two homes in East Jerusalem led to increased tensions, and a Palestinian was killed as he attempted a stabbing attack against Israeli soldiers.

In the UAE, Houthi forces launched bomb-laden drones, alongside cruise and ballistic missiles at Abu Dhabi airport, Dubai airport, and a fuel depot of the Abu Dhabi National Oil Company on 17 January. Three workers were killed in the oil facility and others were injured in the strike on an extension of Abu Dhabi airport. According to Emirati sources during an online panel, several drones and missiles were intercepted and those targeting Dubai airport landed in desert areas (Reuters, 20 January 2022). The last time Houthi forces claimed to have targeted the UAE was in July 2018 (Middle East Eye, 27 July 2018).

The attacks came after warnings from the Houthi leadership that the UAE would face “great consequences” for “reentering” the war (AEI Critical Threats, 12 January 2022). The naming of the attack as ‘Operation Yemen Cyclone’ (Ansar Allah, 17 January 2022) seems to be a direct reference to ‘Operation Southern Cyclone,’ which was launched by UAE-backed forces against Houthi forces in Shabwah governorate earlier this year. Following the attacks, US President Joe Biden announced that his administration would consider re-designating the Houthis as a terrorist group (Reuters, 20 January 2022). Despite this, similar attacks are likely to continue as Houthi forces continue to lose territory in Yemen. Last week, Houthi forces lost ground to Saudi-led coalition-backed forces in both Marib and Shabwah governorates.

Elsewhere in Yemen, Saudi-led coalition airstrikes resumed on Sanaa city last week after a three-week lull, resulting in a 362% spike in violence in Amanat al Asimah governorate relative to the past month that is flagged by ACLED’s Subnational Surge Tracker. Violence in Amanat al Asimah is both common and highly volatile; it is considered an area of ‘extreme risk’ by ACLED’s Volatility and Risk Predictability Index, mostly as a result of Saudi-led coalition airstrikes on the capital. In Hodeidah city, a Saudi-led coalition airstrike on communications infrastructure on 21 January led to a four-day internet blackout. Some argue that the Houthis might have deliberately suspended the internet amid ground losses (Twitter @Macoombs, 21 January 2022; Twitter @CarvajalF, 25 January 2022). In Sadah governorate, a detention center located inside a central security camp was struck, killing at least 82 detainees. Amid an increase in civilian casualties from Saudi-led coalition airstrikes since November 2021, this incident represents the highest civilian death toll from coalition airstrikes since August 2019, when another detention center in Dhamar was struck. According to local sources, a number of these fatalities were inflicted by Houthi fire after the airstrikes (Mwatana for Human Rights, 25 January 2022). ACLED’s Conflict Change Map warned of a surge in violence in Yemen earlier this month.

Meanwhile, IS militants conducted a high-profile prison break in Al Hasakeh city last week. On 20 January, IS militants attacked the Al Sanaa prison, detonating a vehicle-borne IED (VBIED) and clashing with QSD, with clashes continuing the next day. The QSD arrested almost 90 of the escapees during the two-day clash in Ghoweran and other adjacent neighborhoods in Al Hasakeh city. The clashes resulted in over 60 fatalities, including civilians.

In Iraq, Duhok province remains a place of extreme risk, as flagged by ACLED’s Volatility and Risk Predictability Index, where violence is both common and highly volatile, as Turkey continues to carry out drone and airstrikes in continued cross-border operations since April 2021. Notably, on 21 January, Turkish army drones carried out a high-profile airstrike targeting two vehicles, killing Yazidi Sinjar Resistance Units (YBS) militants in Sinjar district, Ninewa. One of the killed militants was a high-ranking YBS commander. Elsewhere in northern Iraq, unknown militants attacked the office of the second deputy speaker of the Iraqi parliament with a sound-grenade in the Rahimawa neighborhood of northern Kirkuk city, targeting a member of the Kurdistan Democratic Party. Violence in Kirkuk has been common though not volatile; however, it has recently become more volatile as a result of an increase in clashes between IS and Iraqi state forces, resulting in a shift from a place of ‘consistent risk’ to being considered an area of ‘extreme risk’ by ACLED’s Volatility and Risk Predictability Index.

Elsewhere, Baghdad city continues to experience heightened levels of political violence. While overall violence decreased last week when compared to the week prior, violence still remains almost double that reported the month prior. On 15 January, unknown militants used a hand grenade to attack the office of a Progress Party politician in the Saidiya area of Baghdad city, though without any reports of casualties. On 16 January, unknown militants simultaneously detonated two explosive devices targeting two Kurdish-owned banks in Baghdad city, injuring civilians. These attacks follow a pattern of increased IED and grenade attacks in Baghdad city in January 2022; ACLED’s Subnational Surge Tracker warned of a surge in violence in Baghdad earlier this month.

Last week in Israel, anti-government protests erupted in support of the opposition leader, former Prime Minister Benjamin Netanyahu. The protests were part of a nationwide campaign led by the National Camp, a right-wing bloc and informal coalition of nationalist and right-wing religious political parties led by the Likud; prominent Zionist rabbis; and settler leaders (Makor Rishon, 19 January 2022). Protesters claim that the current government, led by Naftali Bennett, is illegitimate and is controlled by the Islamist United Arab List party, a junior partner in the ruling coalition. They accuse the government of jeopardizing Israel’s security, democracy, and Jewish character (Arutz Sheva, 18 January 2022). Hundreds of Netanyahu’s opponents also held a protest in Petah Tikva against a possible plea deal with Netanyahu in his corruption trial (Times of Israel, 15 January 2022). He stands accused of fraud, bribery, and breach of trust in three separate cases, but has so far denied all charges against him (BBC, 17 January 2022).

Lastly, in Palestine, Israeli police forces demolished two Palestinian-owned homes in the Shaykh Jarrah neighborhood of East Jerusalem’s old city last week, expropriating the land to build a school. The home owners had been engaged in a five-year legal battle with Jerusalem’s municipal authorities, attempting to prevent their eviction (Haaretz, 19 January 2022). During the demolition on 19 January, Israeli police forces assaulted residents of the homes and arrested 27 others who refused to evacuate the area. Two days earlier, Palestinian and Israeli Arabs had gathered in Shayk Jarrah to protest against the planned demolition, but were forcefully dispersed by Israeli police forces. In another development, an unidentified Palestinian attempted to stab an Israeli soldier at the Gush Etzion settlement junction, but was shot and killed as he approached them.