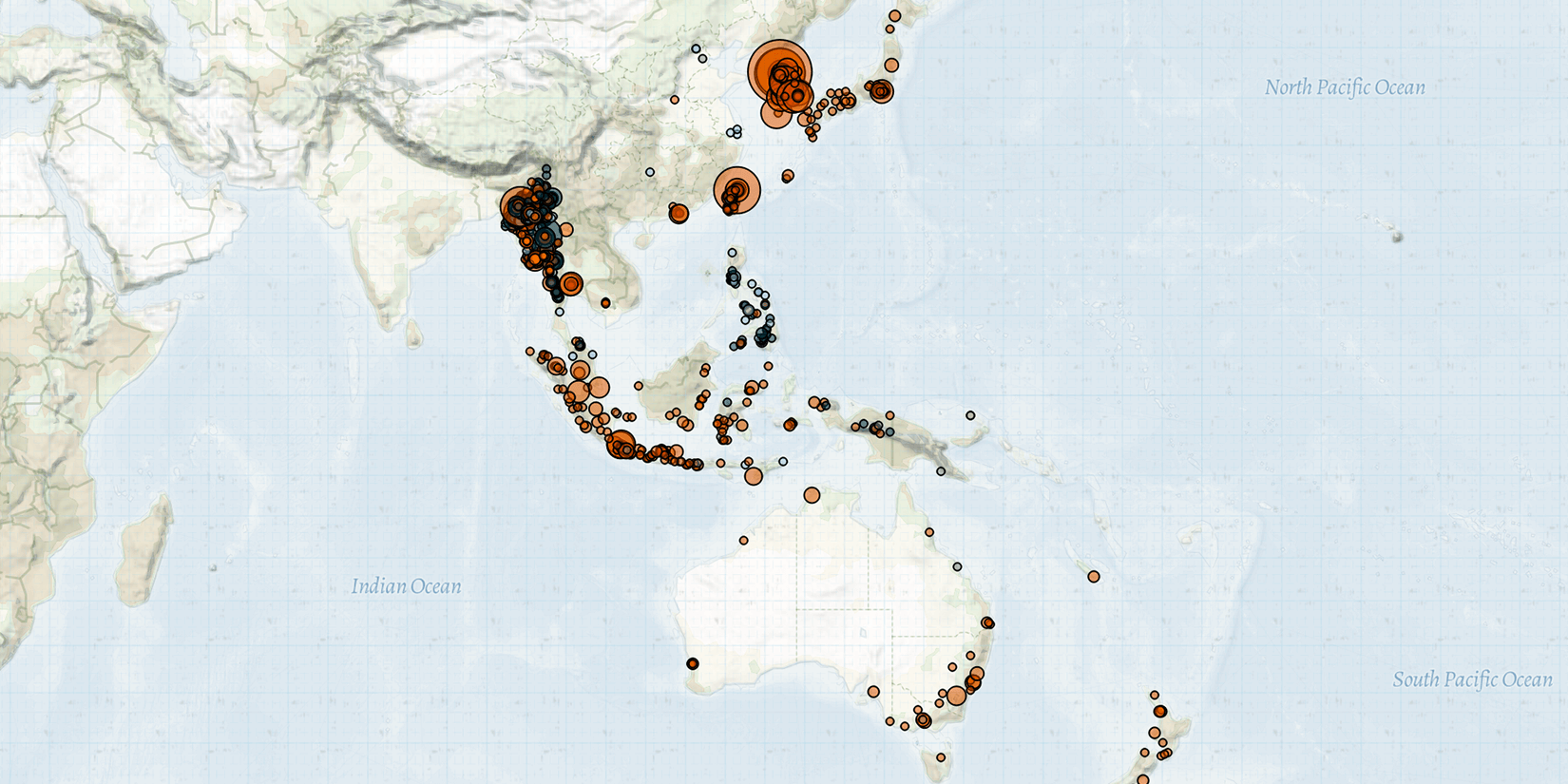 Last week in the East Asia Pacific region1On 2 February 2022, ACLED achieved global real-time coverage with a final geographic expansion to Canada, Oceania, Antarctica, and all remaining small states and territories. The countries of Oceania will be reviewed in the now-renamed ‘East Asia Pacific’ regional overview on a weekly basis going forward. , heavy fighting between the military and ethnic armed organizations (EAOs) and resistance groups was reported in Myanmar, in Chin and Kayah states. North Korea launched new missile tests. In Indonesia, a series of protests were staged by ethnic groups in response to controversial comments by politicians. In Malaysia, people took to the streets to demand the resignation of the Malaysian Anti-Corruption Commission (MACC) chief commissioner, over undisclosed investments. In Japan, anti-nuclear demonstrations were staged on the anniversary of the Treaty on the Prohibition of Nuclear Weapons (TPNW), which the government has not signed. In Thailand, there was an uptick in protest events demanding to tackle rising living costs. Lastly, in Australia, Aboriginal rights activists led demonstrations around the country in protest of Australia Day on 26 January.

In Myanmar, armed clashes between military forces and EAOs and other resistance groups were reported last week, continuing at a steady rate in the country. The trends have contributed to the 63% increase in violence in the country over the past month relative to the past year, as flagged by ACLED’s Conflict Change Map, which first warned of increased violence to come last month. This violence is most notable in Chin and Kayah states, as well as in Magway and Sagaing regions. In Chin state, intense fighting broke out in Tedim township on 22 January between the military and a coalition of Chin armed groups, including the Chinland Defense Force (CDF) and the Chin National Front/Chin National Army (CNF/CNA). During the clash, military forces fired cannons and conducted airstrikes with two military aircrafts. Resistance groups claim that at least 40 soldiers were killed during fighting (Burma News International, 26 January 2022). Violence has increased at a steady rate in Chin state, and the trends of heavy fighting in Chin state have contributed to the 258% increase in violence last month relative to the past year. This was the highest increase amongst all 15 administrative territories in Myanmar, as flagged by ACLED’s Subnational Threat Tracker, which first warned of increased violence to come in Chin state last month.

Last week, North Korea conducted two new rounds of missile tests which landed in the waters off the east coast of the Korean Peninsula (Al Jazeera, 28 January 2022). On 25 January, North Korea test-fired two long-range cruise missiles and, just two days later, launched two short-range ballistic missiles. Experts believe that this may be the highest number of tests ever conducted during one month (Al Jazeera, 27 January 2022). The North Korean authorities previously hinted at resuming “all temporarily-suspended activities” (Al Jazeera, 20 January 2021). Experts believe that this may refer to North Korea’s plan to scrap a self-imposed moratorium on testing nuclear weapons and long-range intercontinental ballistic missiles (ICBMs), which have not been tested since 2017 (Al Jazeera, 20 January 2021).

Insensitive comments made by politicians triggered two waves of protests across Indonesia last week. In Kalimantan, locals, including members of the Dayak community, staged protests in every major city demanding the arrest of a parliamentary candidate, who implied that Kalimantan is too underdeveloped to be Indonesia’s new capital (Tribunnews, 26 January 2022). Earlier this month, the Indonesian parliament approved a bill to relocate Indonesia’s capital from Jakarta to Nusantara, a new city to be built in Kalimantan (CNN, 18 January 2022). Meanwhile, in Java, Sundanese people, an ethnic group native to West Java, staged multiple protests demanding the resignation of an MP, who recently stated that government staff should not use the Sunda traditional language during official meetings (Tribunnews, 26 January 2022).

In Malaysia, hundreds of people held a rally in Kuala Lumpur last week demanding the resignation of the MACC chief commissioner, who was involved in a stock-trading controversy (Free Malaysia Today, 22 January 2022). Protesters claim the chief commissioner failed to declare a large sum of investments that he owned. They planned to march to the National Mosque and Merdeka Square but were stopped by police (Free Malaysia Today, 22 January 2022). This comes after Malaysian police summoned people who participated in a similar protest for questioning the week prior. This prompted dozens of people to stage a protest last week in front of the Brickfields police headquarters in Kuala Lumpur to show support for those summoned by police (Malaysiakini, 28 January 2022). They claim the questioning is a form of intimidation to deter future protests (Malaysiakini, 28 January 2022).

In Japan, anti-nuclear protests were reported across the country last week. Demonstrators demand the abolition of all nuclear weapons and that the Japanese government become party to the TPNW. The protests coincided with the one-year anniversary, on 22 January, of the day the treaty became effective. Japan’s government did not join the treaty as Japan’s security is thought to be enhanced by its relationship with the US and its ‘nuclear umbrella’ (The Diplomat, 10 February 2021). Protesters point out that Japan is in a unique position as the only victim of nuclear weapons and should thus join the treaty (Asahi Shimbun, 22 January 2022).

In Thailand, the number of protest events increased last week. The majority of protests call on the government to alleviate financial hardship from rising living costs and to take proactive steps to address problems ranging from land conflicts to ancestral rights violations in several provinces. The People’s Network for a Just Society (P-Move) and the Four Regions Slum Network held protests outside the UN in Bangkok for several days.

Meanwhile, Aboriginal rights activists led ‘Invasion Day’ rallies across Australia last week, coinciding with the celebration of Australia Day on 26 January. The celebration of Australia Day, which commemorates the landing of the British fleet in Sydney Harbour in 1788, has been long-contested in Australia and is marked as a time of mourning amongst Indigenous communities (Washington Post, 26 January 2022). Thousands of demonstrators in support of Indigenous rights gathered in Canberra and across state capitals (Reuters, 26 January 2022). Demonstrators also marked the 50th anniversary of the Aboriginal Tent Embassy, a permanent Indigenous land rights occupation protest in Canberra (ABC, 25 January 2021). In Melbourne, a statue of the British naval officer, James Cook, was discovered doused in red paint on the same day, with flyers that read ‘Abolish Australia Day’ (The Age, 26 January 2022).